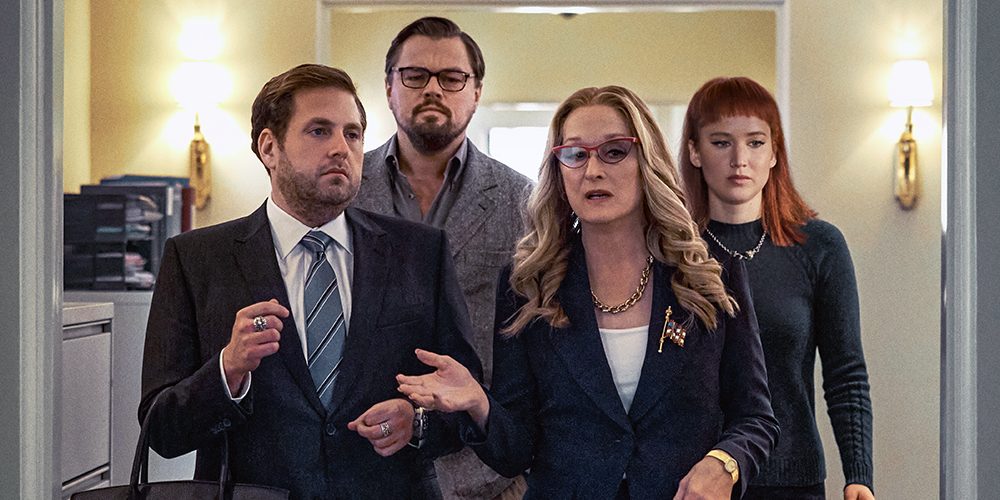 In Adam McKay’s cynical tour de force sci-fi comedy ‘Don’t Look Up,’ the world ends with a whimper and not a bang. With a star-studded cast ensemble comprising Leonardo DiCaprio, Jennifer Lawrence, Meryl Streep, Jonah Hill, Cate Blanchett, and Timothee Chalamet, the disaster movie is quite a glorious all-encompassing disaster of its own. The provocative satire has a lot to say about society, although it is never too sure how to say it. A comet is on a collision course to Earth, and the event will possibly cause mass extinction.

Michigan State University student Kate and professor Dr. Randall Mindy team up with Teddy from the Planetary Defense Coordination Office to convince the media about the apocalypse. Nobody is interested, and even when they get the media attention, the fate of Earth rests on a questionable mission by a business tycoon. The ending is predictable, but a post-credit sequence keeps the audience hooked. What happens in the post-credits sequence, you wonder. Let us clarity things, but beware of spoilers.

Don’t Look Up Post-Credits Scene: Who Survives The Apocalypse? Where Do They Reach?

The post-credit sequence follows a time leap. The apocalypse takes place, and most of humanity gets obliterated from the face of the planet. Earth also becomes inevitable, but Isherwell has a plan B ready for the big-league elites. The elites have reserved seats in a mission to find a habitable planet. They want to take Randall as well, but he stays back and seemingly perishes along with much of humankind.

However, precisely 22,740 years after the extinction event, a few human survivors reach an alien planet. They wake up from cryogenic sleep. Isherwell, President Orlean, and their close colleagues descend on the globe. Isherwell informs the party that the alien planet has 9 percent more Oxygen in its environment than Earth. They may feel a little weightless, but that is a minor hiccup compared to their new lease of life.

What Is Cryogenic Sleep? Why Are The Voyagers Mostly Old People?

Naturally, a human body cannot remain alive for 22,740 years due to anatomical reasons. Therefore, sci-fi movies’ journeys to far-flung galaxies often entail a cryogenic sleep. Cryogenic sleep is a process to keep the human body alive in an immobile and hibernating state. The method stops or slows down biological functions to preserve physiological capacities. It can be temperature-induced or chemically propelled.

However, both types aim to preserve the animal body in extreme conditions like space journeys. As they reach the planet, the remaining specimen of humankind come out of their capsules. We also notice that most of the people are pretty old. If they seek to populate the planet, this seems unrealistic, as old age takes away some of the fertility. However, the depiction can also be a snub at the politicians and their idiocy, as most politicians and bureaucrats are pretty old in the movie.

How Does The President Die? What Is A Bronteroc?

Previously in the story, Isherwell divulges that his omniscient AI has prophesied that a Bronteroc would cause the president’s death. It seems absurd at the time of prediction because no such thing as Bronteroc exists in human cognitive capacity. However, as they reach the new planet, we find that Bronteroc is an alien mammal species that inhabit the Earth.

It looks like a bird, particularly a rooster, only more giant in size and a bit more colorful. When president Orlean is in the middle of her naturalistic dance spree, she catches a glimpse of the bird-like creature. She goes ahead to pet it, but it is not a domesticated animal. Thus, the Bronteroc ends up chewing her head, and the story keeps us rooting for a sequel.

Read More: Where Was Don’t Look Up Filmed?