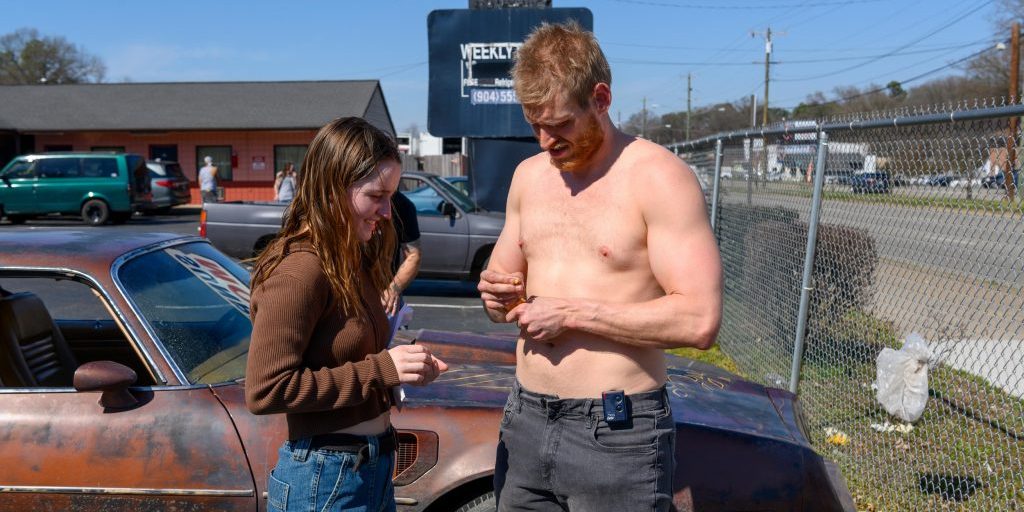 ‘Dopesick’ tells the story of America’s opioid addiction crisis through the perspectives of the doctors, patients, sales reps, and prosecutors affected by the misbranding of Purdue Pharma’s drug, OxyContin. The fourth episode of the drama series revolves around Richard Sackler resorting to the help of a supposed medical expert with a questionable theory to continue pushing OxyContin’s sales.

Meanwhile, Dr. Finnix must deal with the effects of the drug sweeping the residents of his Virginia town while dealing with his own addiction. Here’s everything that goes down in ‘Dopesick’ episode 4 and what the ending means for the characters’ future. SPOILERS AHEAD!

Episode 4, titled ‘Pseudo-Addiction,’ opens in 1997 as teenagers abuse OxyContin, which is readily becoming available on the streets. On his father’s advice, Richard looks for a new expert to continue propagating OxyContin despite recent reports indicating that the drug is, in fact, addictive, contrary to the company’s claims. He meets with Dr. David Haddox after listening to his theory about “pseudo-addiction.” Using the theory as a basis, Purdue Pharma creates a new pamphlet to help their reps sell more OxyContin.

Billy meets with Finnix and explains the pseudo-addiction theory. However, following his accident, Finnix has clearly become addicted to OxyContin and throws Billy out. After running into with her ex-girlfriend, Grace, Betsy decides to head to Florida with her drug dealer in search of an OxyContin prescription. Concerned for Betsy’s safety, her parents urge Betsy to attend an addiction support group meeting.

In 2002, Agent Mayer’s investigation heads nowhere as the FDA fails to provide her with any crucial information. Moving forward to 2004, Mountcastle and Ramseyer continue their investigation into Purdue Pharma but are drowning in paperwork and struggling due to a lack of proper resources. Although, they manage to obtain a substantial lead that will help them build a solid criminal misbranding case against Purdue Pharma.

Dopesick Episode 4 Ending: Will Finnix Recover From His Addiction?

In the previous episode, Finnix breaks four ribs in an accident and is prescribed OxyContin for his pain. Soon, he slips down the rabbit hole of addiction and ends up in a similar situation to most of his patients. He tries to fight his urges for opioids, but it is evident that the drug has changed him as a person. Therefore, it is no surprise that after spending the entire episode trying to swear off the pill, Finnix succumbs to his temptations and procures OxyContin from a local dealer.

After taking a hit, Finnix sees a picture of his wife and hallucinates dancing with her. It is a tender moment that reminds the doctor of the nicer times. However, this particular moment could also signal Finnix’s eventual recovery from addiction. The memories of his wife could be instrumental in helping Finnix become sober. Moreover, his first-hand experience of the drug as well as observation of its effects on his patients will make Finnix a strong witness in the case against Purdue Pharma. Much like Finnix’s addiction, most of his recovery is likely to happen offscreen.

What New Lead Do Mountcastle and Ramseyer Find?

In the episode, Mountcastle and Ramseyer are searching for the original research claiming that less than 1% of opioid users get addicted to the drug. They track down the research’s proprietor Dr. Herschel Jick. However, the research turns out to be a letter to the editor and not an official scientific study. Jick is summoned to the court, where he reveals that his study was merely an observation that was conducted at a hospital with a small number of patients.

The conclusion of his observation is that in a highly controlled environment, patients show a lesser tendency of getting addicted to opioids. Furthermore, Jick agrees that in an open environment, the likelihood of these patients getting addicted is much higher. However, Jick is unaware of his article’s use in propagating opioids as a safe drug. Mountcastle then explains that Jick’s letter was cited as a primary source by Dr. Russell Portenoy in an article published by Pain magazine.

Portenoy is a known spokesperson for Purdue Pharma. Thus, enabling the prosecutors to indict Purdue Pharma in the criminal misbranding case directly. Although it is a significant breakthrough in the case for Mountcastle and Ramseyer, it will be difficult for them to prove Purdue’s guilt in the case, given the various loopholes the company has taken advantage of. However, the case is starting to get airtight, and Purdue’s downfall is destined.