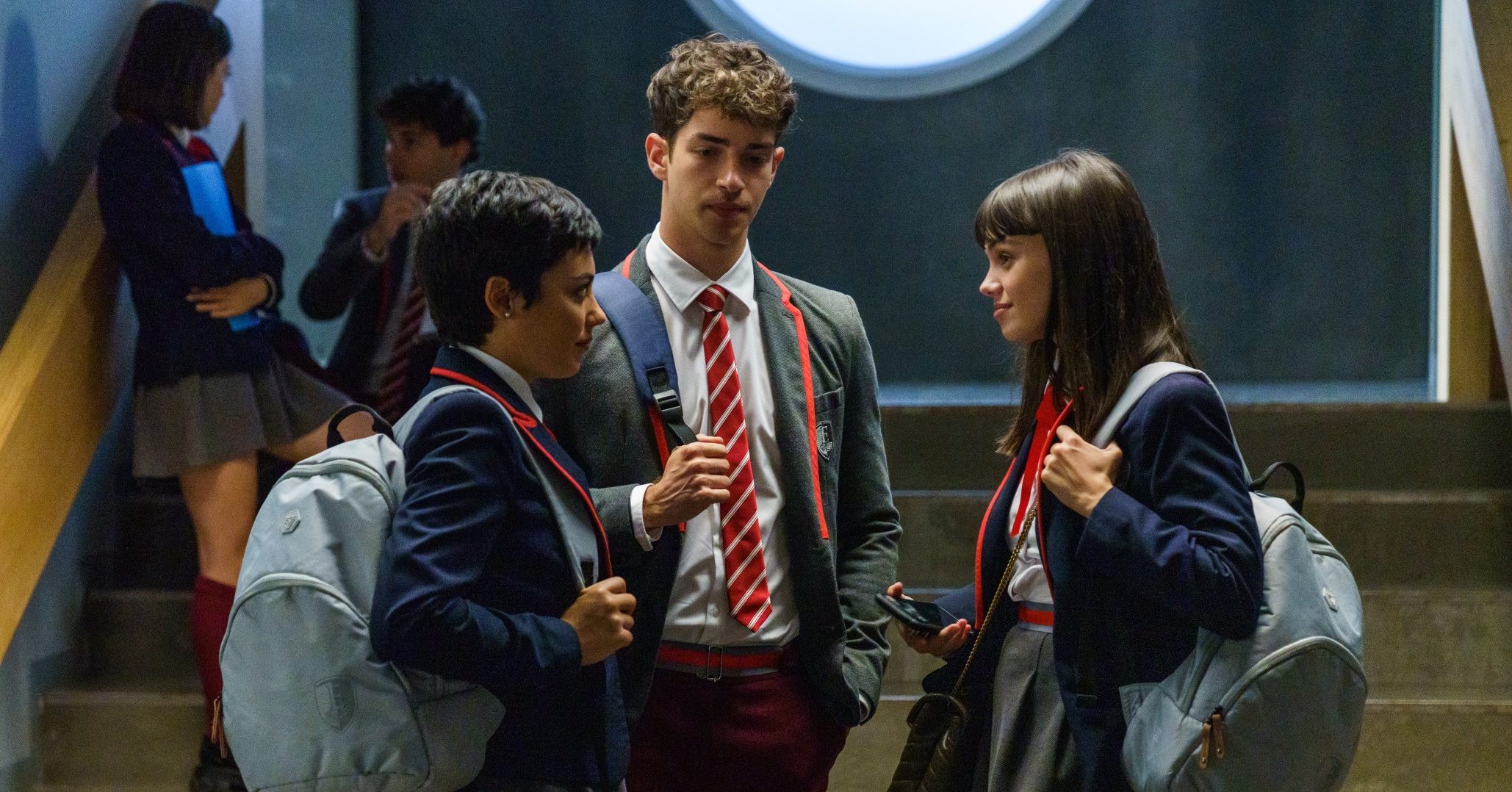 Netflix’s teen show ‘Elite’ centers around Las Encinas, a renowned secondary school, and the lives of the students studying in the elite institution. In the fifth season of the Spanish show, Samuel and Ari begin a new chapter of their relationship after the departure of Guzmán. Phillipe’s past continues to haunt him and he finds a companion in Isadora. Patrick gets attracted to Iván while the latter’s father Cruz gets involved in their lives. Samuel and Benjamín deal with the murder of Armando, which creates consequences that rewrites their fates. The engrossing season ends with startling developments one after the other. If you are up for a detailed look at the same, consider us your ally! SPOILERS AHEAD.

The fifth season begins with Elodie’s revelation that Phillipe had sexually abused her. His hopes of reuniting with Cayetana come to a dead end with the revelation. Isadora, a new arrival at Las Encinas, extends her support to Phillipe and gradually becomes his new romantic interest. Iván, another new student at the school, seduces Patrick. Samuel meets Ari and patches things up with her to resume their relationship. The police meet Benjamín to enquire about Armando. Cayetana accompanies Phillipe to meet a therapist for him, who asks him to avoid alcohol. He attends the therapy sessions for Cayetana but stops the same when she lets him know that she will not reunite with him.

Rebeka tries to patch things up with Mencía but the latter avoids her. Out of spite, Rebeka starts a relationship with another girl, hurting Mencía. Omar meets Bilal, an immigrant who seeks shelter with the former. Iván kisses Ari, who dismisses his advances. Still, Ari develops an interest in Iván irrespective of her relationship with Samuel. Armando’s dead body resurfaces while Benjamín conducts a fundraiser. Due to Omar’s insistence, Samuel reports the body to the police. Samuel also quits his job as a waiter to explore internship opportunities upon thinking about his future. Ari and Iván have sex while Patrick witnesses the same.

Mencía discovers Armando’s SIM card in her phone. She goes through the data in the card and finds out that her father Benjamín was involved with Armando before the latter’s death. Cayetana meets Felipe and she considers dating him. After seeing Iván and Ari together, Patrick becomes intimate with Iván’s father Cruz. Meanwhile, Iván realizes that he is attracted to Patrick and both of them have sex. Mencía and Rebeka talk about their issues and reunite. Samuel confesses to killing Armando to save Benjamín and Guzmán. Benjamín assures Samuel that his confession will be rewarded with numerous benefits to secure his future.

Mencía gives Armando’s SIM card to Benjamín to protect her father after creating a copy of the same. Benjamín refrains from bailing Samuel out, thinking it will help to prevent any investigation against him. Ari expresses her sadness concerning Samuel to Iván, who promises to help her release him. He conducts a fundraising party and pays the bail money for Samuel to get released from prison. Ari and Iván have sex one last time before Samuel returns to her life. Iván finds out that Patrick is seeing his father. Before Samuel’s release, the police lieutenant reveals to him that Benjamín and Armando were running a network that trafficked the data of powerful and influential people.

The lieutenant promises to drop the case against Samuel if he succeeds in bringing down Benjamín. From Rebeka, he comes to know that Benjamín has a SIM card that may help him complete the secret mission against the principal. Samuel and Rebeka go to Benjamín’s house to find the SIM card and obtain it from Mencía. When Isadora realizes that Phillipe doesn’t want her, she goes to Ibiza with three friends from school and Iván. She passes out after using drugs and the three boys rape her. Iván and Phillipe confront the boys and later motivate Isadora to report the incident to the police. Cayetana gets fired for helping Samuel and Rebeka to find the SIM card. Rebeka breaks up with Mencía without telling the latter a satisfactory reason.

Samuel is presumed dead. After obtaining the SIM card from Mencía, Samuel decides to submit the same to the police to clear his name from the case. Meanwhile, Benjamín begs him to meet for a talk before he handovers the card. Samuel agrees and meets Benjamín, who offers a completely-funded seat to study at the University of Oxford with additional stipends and a job offer in his company once he completes his studies. However, Samuel rejects the offer since his conscience tells him he doesn’t need to be a scapegoat. He makes it clear to Benjamín that he will certainly submit the card, which leads the latter to obtain it from Samuel by force.

While Benjamín tries his best to retrieve the card, Samuel slips, hits his head on the concrete floor, and falls to the swimming pool. Even though Patrick arrives at the scene and rescues Samuel from drowning, Benjamín makes no effort to call an ambulance. He thinks that calling the ambulance will pave the way for his arrest for attempted murder. To avoid such a predicament, he decides against seeking help to save Samuel. Patrick calls Ari and Mencía, who arrive at their house with Rebeka and Omar. Although Samuel manages to wake from his unconsciousness temporarily, the massive loss of blood makes him unconscious again and he falls to the ground.

Omar and Rebeka try their best to make him hold onto life but it is unsure whether he does till the time the police arrive after Mencía informs them. Samuel’s enormous blood loss and his unresponsive state indicate that he may have died. Furthermore, Omar and Rebeka’s hopeless faces also display the possibility of Samuel’s death. Still, the uncertainty regarding Samuel’s state leaves a glimmer of hope that he can be alive. Since the season ends without depicting Samuel’s condition after the authorities’ arrival or confirming his possible death, there’s a minor chance that he survives, at least to continue his fight against death.

Does Benjamín Get Arrested? Do the Police Get the SIM Card?

Yes, Benjamín does get arrested. When Patrick asks him to call the ambulance to save Samuel, Benjamín prioritizes his safety and his family’s security over Samuel’s life. He fears getting arrested for attempted murder, even though he doesn’t do it, since he has the motive to kill Samuel. Benjamín doesn’t want to spend his life in prison or see his son and daughters live unmonitored lives during his imprisonment. However, Mencía refrains from becoming selfish like her father and calls the police. She realizes that her father doesn’t deserve another chance after a series of betrayals. Thus, the police arrive and arrest Benjamín.

However, it is uncertain whether the police get the SIM card against Benjamín. After hitting his head, Samuel falls to the swimming pool with his bag on. Mencía later finds the card in the pool and she must have retrieved the same. Even though she calls the police to hand over her father for trying to kill Samuel, Mencía may not be in a hurry to submit the card. She doesn’t find trafficking the data of powerful people vicious enough to invite harm to her family. She may want her father punished only for trying to kill or possibly killing Samuel, which will likely motivate her to hide the card from the police.

Otherwise, Samuel’s possible death may infuriate Mencía to submit the card to the police. She knows that her father cannot be trusted again, especially after trying to kill his daughter’s boyfriend in her eyes. Such a belief, even though it is not accurate, may lead her to the police with the SIM card. Mencía’s decision regarding the SIM card will most likely determine Benjamín’s fate. If she decides to give it to the police, Benjamín may stay longer in prison. If she doesn’t, Benjamín may try to prove that he isn’t to be blamed for Samuel’s presumed death to get released from prison.

Do Patrick and Iván End Up Together? Will Iván Leave for Qatar?

When Iván finds out that Patrick and his father Cruz share an intimate relationship, it crushes him. He feels hopeless and falls into unbearable grief. Realizing his son’s state, Cruz invites Patrick for a meeting with Iván without letting both of them know about the other person’s presence. Cruz reminds Patrick of the love he nurtures for Iván and tells both of them that he will never involve with Patrick anymore. He also reminds Iván how he has found someone special in Patrick. After years of moving from one place to another, without being able to maintain any meaningful relationships, Iván is finally happy with Patrick and Cruz wants to protect that happiness.

Cruz’s words move Iván to think about how he has found a home in Patrick. He realizes that the connection he feels with Patrick shouldn’t go in vain. Furthermore, the voice message Iván sends to Ari makes him sure that he loves her brother deeply. The conversation with Cruz gives Iván the courage and affirmation to tell himself that Patrick is the one. While Patrick deals with his father’s arrest, Iván arrives at the place and hugs him, confirming their union. Since they both end up together, Iván will not leave for Qatar. Cruz wants his son to be with the one he loves and Iván’s decision to unite with Patrick changes the father and son’s plans. Thus, we can expect Iván to remain with Patrick.