Flavia Laos Urbina From Too Hot to Handle: Everything We Know 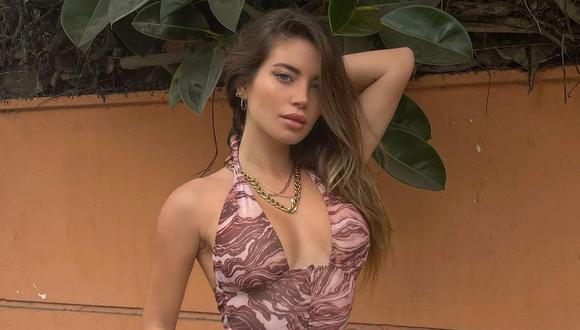 Netflix’s ‘Too Hot to Handle’ is arguably the steamiest dating reality TV show that takes the dating genre of reality TV to a new level. Do you have what it takes to curb your deepest desires when lust is rubbing on your face? This is exactly what the contestants have to face. However, the hot and happening singles don’t know what they have signed up for. Under the disguise of a new dating show called ‘Wild Love’ hosted by the famous Mario Lopez, the contestants of season 4 were expected to fall in love and explore their sexual fantasies more intensely.

Season 4 introduced several desirable singles, one of which is the gorgeous Peruvian princess Flavia Laos Urbina. Her gorgeous looks and talented personality piqued the curiosity of fans about her personal life. Naturally, many must wish to know more about her personal and professional life, along with whether she has a special someone in her life. Well, let’s find out!

A native of Lima, Peru, Flavia Laos Urbina was born on August 1, 1997. Flavia comes from a beautiful family of four that comprises her parents, Mario Laos and Patricia Urbina. She also has a younger sister named Kiara Laos, with whom the reality TV star shares a close bond. She completed her education at Colegio Sans Silvestre and attended music and acting classes to fulfill her childhood dream of becoming an actor and singer. The gorgeous personality loves attending music festivals and traveling with her loved ones.

Apart from entertaining the world on one of the most famous reality TV shows, Flavia Laos Urbina is working as an actor, singer, model, and social media influencer. The superbly talented star has a lot going on and has efficiently balanced it all. It is not surprising that Flavia is a model. She has worked with different fashion brands, such as Fashion Nova. She came under the limelight after winning Miss Pequeita in 2005. In addition, she also has a successful music career. Flavia has released three songs, “Ahora Me Llamas,” “Estar Contigo,” and “Despierta” and has also served as the host of ‘La Hora Warner.’

Flavia’s successful acting career began quite early when she appeared in ‘America Kids’ from 2002 to 2007 and ‘La Academia’ for two years starting in 2010. She also has various films and shows in her credit, such as ‘The Christ Child,’ ‘Princesas,’ ‘Te volveré a Encontrar,’ ‘Ven, Baila, Quinceañera,’ and ‘No Me Digas Solterona.’ Ahead of Netflix’s ‘Too Hot to Handle,’ Flavia has participated in other shows such as ‘Combate,’ ‘Reto De Campeones,’ and ‘Esto es Guerra.’ She also took home the People’s Choice Award for Best Latin Influencer in 2022.

The talented star is also a social media influencer with around 4.7 million followers. She is very active on social media, sharing bits and pieces of her best life, touring across the world, and attending different music festivals with her friends. Flavia has traveled to various destinations, including Bali, Dubai, London, Miami, Phuket, Madrid, Italy, Chile, Los Angeles, and others.

After stirring things up in the ‘Too Hot to Handle’ villa with Creed Mckinnon, Flavia Laos Urbina has been reportedly dating 28-year-old singer Austin Palao. Though the couple seems to have been dating for quite some time, they made their relationship official on social media in August 2022, during their romantic trip to Indonesia. Though Flavia and Austin share bits of their romantic and comic memories on social media, they try to keep their relationship private for their own sake.

Though speculations of the pair breaking up arose, Flavia and Austin quickly dismissed them. As of writing, the lovers are truly and madly in love whilst focusing on their individual careers, paying absolutely no heed to unwanted rumors. In fact, they recently spent some quality time in London, and discreetly shared pictures of each other on the same spot. Not just that, the duo ensured they left flirty comments on their respective pictures to hype their fans. We wish the couple the best in their life and hope to see an extended family soon.