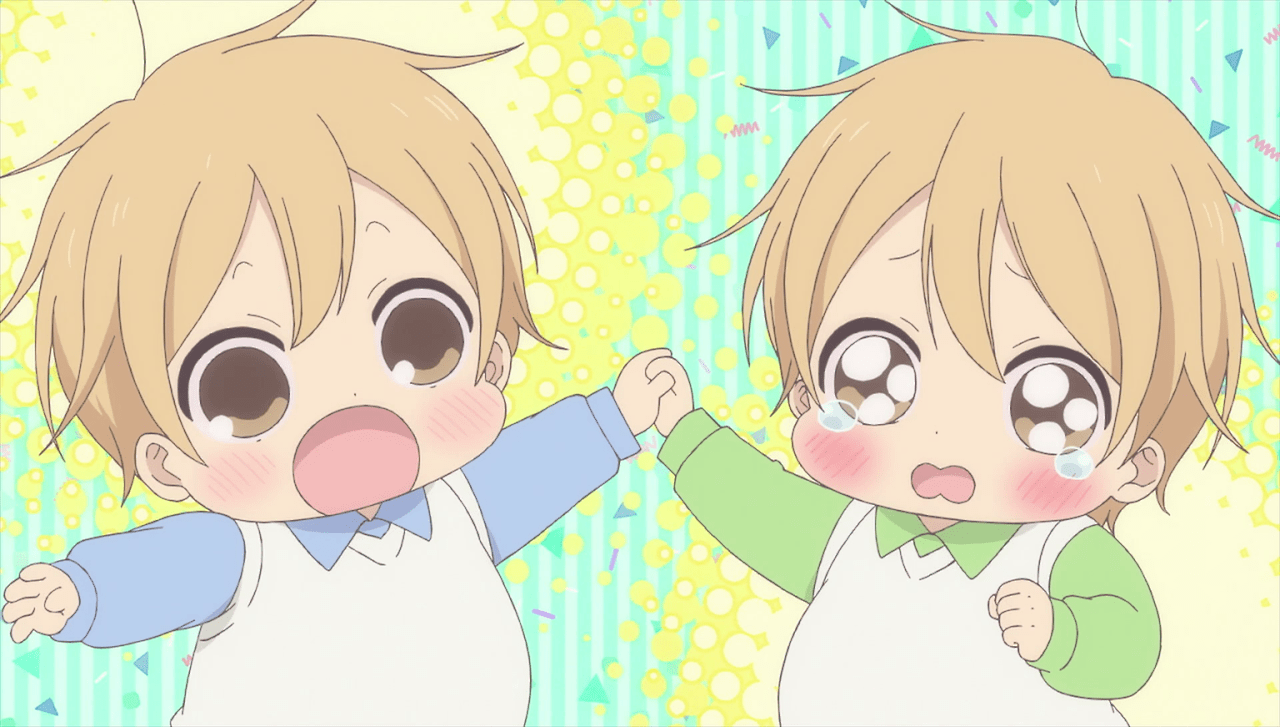 If you’ve ever experienced taking care of someone in your life, perhaps someone much younger than you, ‘Gakuen Babysitters’ will certainly be relatable for you. Translated to “School Babysitters”, the anime is exactly what you would expect it to be. For the most part, even its storyline is quite predictable and its characters have generic personalities. But it’s still refreshing to see how realistic and simple it remains all the way till the end. It not only portrays a heart-touching story but also, as a viewer, it allows you to experience a whole coming-of-age tale with its genuine characters. The character chemistry plays an imperative role in capturing the very essence of its deep themes and its raw visual quality adds a sense of charm to the personalities of its characters.

‘Gakuen Babysitters’ is certainly a must-watch for anyone who is looking for something new and refreshing. Though it may be targeted towards a certain demographic, it can be enjoyed by pretty much anyone.

Gakuen Babysitters Season 2 Release Date: When will it premiere?

‘Gakuen Babysitters’ season 1 premiered on January 7, 2018 and with a total of 12 episodes, it ended on March 25, 2018. Since its release, the anime has been widely appreciated for its feel-good themes and comedy. In the past, Brain’s Base Studio has renewed several of its anime shows, especially the popular ones like ‘Durarara‘ and ‘Baccano‘. So considering how popular and well-received ‘Gakuen Babysitters’ has proven to be in such a short span of time, it might return with a sequel in the near future.

But contrary to this, the ending of the first season was quite conclusive and left no cliffhangers for a follow-up. In conclusion, as of now, it is a bit too soon to say anything about the anime’s return but if the Studio does have plans of renewing it, we might hear some news about ‘Gakuen Babysitters’ season 2 by summer 2020. Till then, you should certainly check out the anime on our list of other similar slice-of-life shows.

An official English dub of ‘Gakuen Babysitters’ is not available yet but you can still stream it on Crunchyroll with its original Japanese audio and English subtitles.

Two siblings, Ryuuichi Kashima and Kotarou are left orphaned when their parents die in a brutal plane crash. While Ryuuchi begins to understand all of his responsibilities now, Kotarou, who is still a toddler, has no clue about what is actually going on. During the funeral of their parents, the two of them are approached by Youko Morinomiya, a stern yet concerned chairman of a renowned academy. She decides to take them home with her and willingly takes on the responsibility of becoming their guardian.

However, to have a roof over his head, Ryuuichi must not only take responsibility for his brother but must also agree to babysit the infant children of the teachers at Youko’s academy. The academy has a babysitters club that was established for the welfare of all female teachers who work there. But since it is extremely short-staffed, Ryuuichi must now learn to take care of all kinds of toddlers.

Ryuuichi Kashima is the main protagonist of the series who really loves his younger brother Kotarou and all the other kids he looks after at the daycare. He is fairly tall for his age and has dark brown hair with big brown eyes. He is considered to be extremely good looking by most girls of his age and everyone admires him for how gentle he is with his brother and all the other kids. He is a very warm person and is easily able to gain the trust of the kids he looks after. He even tries to comfort all the upset children and makes them feel at home around him. He remains to be quite naive when it comes to other matters and has no clue that many girls from his own class have a crush on him. He also tries to stay away from relationships as he realizes that his younger brother is his top priority and he must focus on taking care of him.

Despite being really polite to everyone around him, he gets really angry when kids are mistreated by their parents. His own parents were “free souls” who enjoyed traveling and would often leave Ryuuchi behind with his brother. After a tragic plane crash, Ryuuichi was left alone with his brother as an orphan. Ryuuichi, though still a teen, takes on the responsibility to take care of his brother.

Kotarou Kashima is Ryuuichi’s younger brother who has short brown hair and always walks around with a cute sleepy expression on his face. From time to time, his dull eyes sparkle when he spots something very exciting. Like all the other kids at the daycare who are looked after by Ryuuichi, Kotarou has chubby cheeks that turn red when he cries. Compared to the others, he is a quiet kid and never really causes too much trouble for the babysitters around him. He really loves his brother and gets a little jealous when other kids get too much of his attention. Though he is still a toddler, he tries to look out for his brother in his own gentle ways. He also seems to be really fond of the chairwoman and calls her “Shaggy” because of her fluffy hairstyle.

Even the other kids at the daycare really admire him and quite often, he also acts as a peacemaker between all of them. He may not be as mature as Ryuuichi but he tries his best to help his brother with everything. He also does not cry too often because he knows that if he does, Ryuuichi will get too worried about him. There is also one incident where Ryuuichi falls really sick and just to make him feel better, Kotarou makes him lemon tea. He wears clothes that have small tigers imprinted on them and his favorite food is sausages cut into the shape of an octopus.