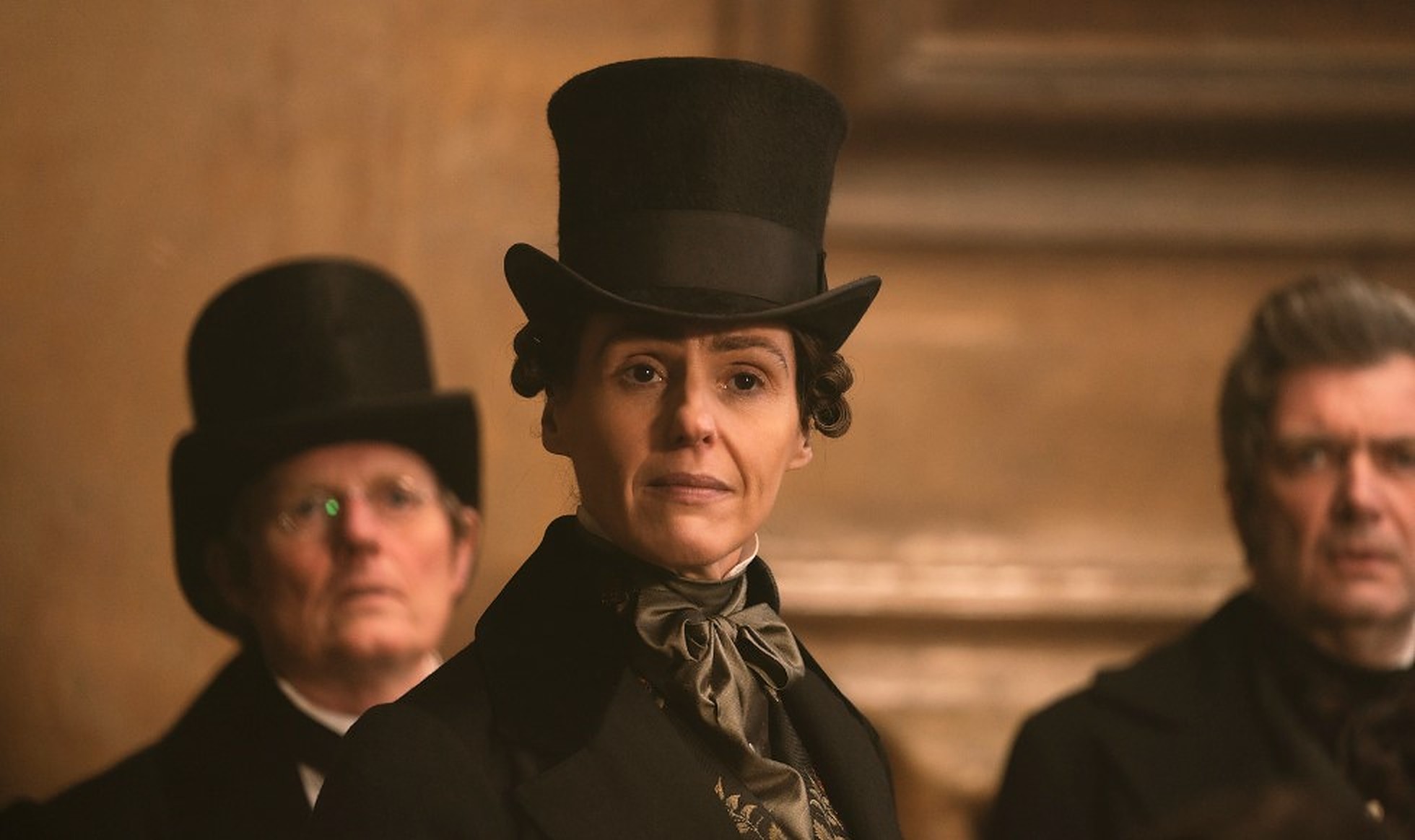 Season 2 episode 5 of the period drama TV series ‘Gentleman Jack‘ is titled ‘A Lucky and Narrow Escape.’ It catches up with the Halifax residents as they gear up for the elections, and Anne Lister leaves no stone unturned to ensure that the Tory party wins. However, chaos soon ensues and her marriage faces the threat of being exposed. Marian leaves everyone in the Lister household surprised with a sudden announcement, leading to discord with Anne.

Later, Ann Walker receives rather unsettling news from her sister and also begins suspecting her wife’s behavior since her return from Mariana’s. Now, if you are curious to know more about these events as well as how season 2 episode 5 of ‘Gentleman Jack’ concludes, we’ve got all the answers ready for you. Let’s begin! SPOILERS AHEAD.

‘A Lucky and Narrow Escape’ commences with Halifax boiling in political unrest, as the Tories lock horns with the Radicals and Whigs for a seat in the parliament. As Anne Lister rallies hard to ensure that the Tories win and Mr. Wortley is inducted into the House of Commons, she realizes that the town is plagued with poverty and hunger. The agitated residents end up thrashing her new groomsman Matthew, further worrying her about how to control matters before they escalate. 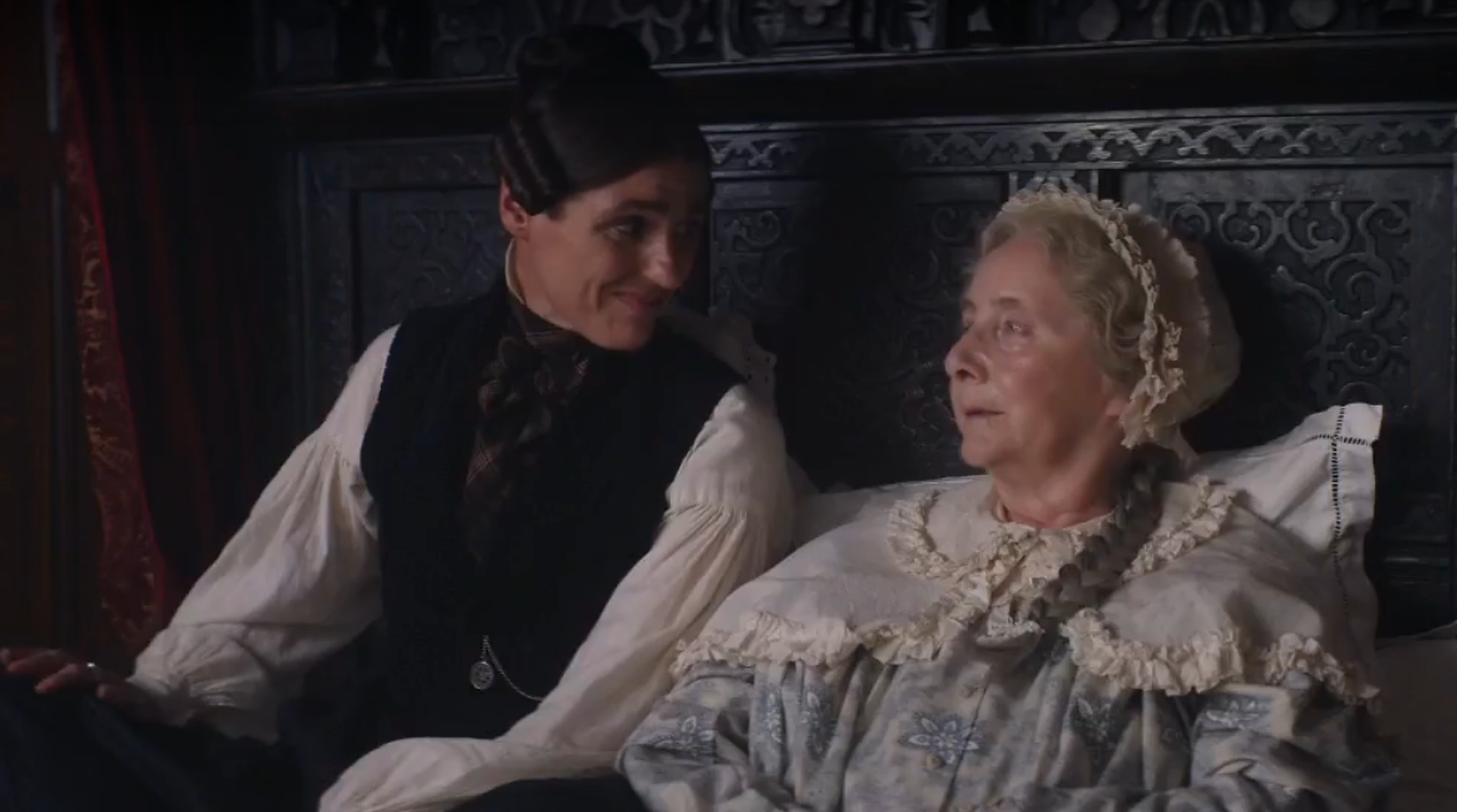 Meanwhile, Aunt Anne Lister’s leg sore worsens, and Mr. Sunderland declares that she needs to be monitored through the winter. Mrs. Cordingley’s hip gets bad as well, but she refuses to be examined by Mr. Sunderland and bursts out at him. This prompts Anne to send her to live with her sister temporarily, as she is worried about her trusted cook’s health. On the other hand, a secret romance starts brewing between Eugénie and Matthew, and Joseph gets mortified after catching them in an intimate state.

Ann Walker receives a sudden letter from her sister Elizabeth, who shockingly orders all the tenants with arrears to be evicted from Crow Nest. Though she gets dejected at this, she permits Mr. Washington to go ahead with the evictions, despite his apprehensions. However, she shares her concerns with her wife, and they conclude that Captain Sutherland is likely manipulating Elizabeth to delay the estate division. Afterward, Captain Lister gets injured while trying to be adventurous in his new carriage, thus worrying both his daughters.

As the poll results arrive, Mr. Wortley manages to secure a seat despite a narrow margin, and Anne heaves a sigh of relief. Unfortunately, violent riots break out all over Halifax in retaliation, and houses and shops are burnt and vandalized. When the Rawsons are targeted, Ann starts worrying that the rioters may reach Shibden Hall as well. Though Mr. Washington assures her that they are safe, they too, fear the outcome of the election results. The next day, Anne sets out to visit Mr. Parker in town, despite Marian’s fears. 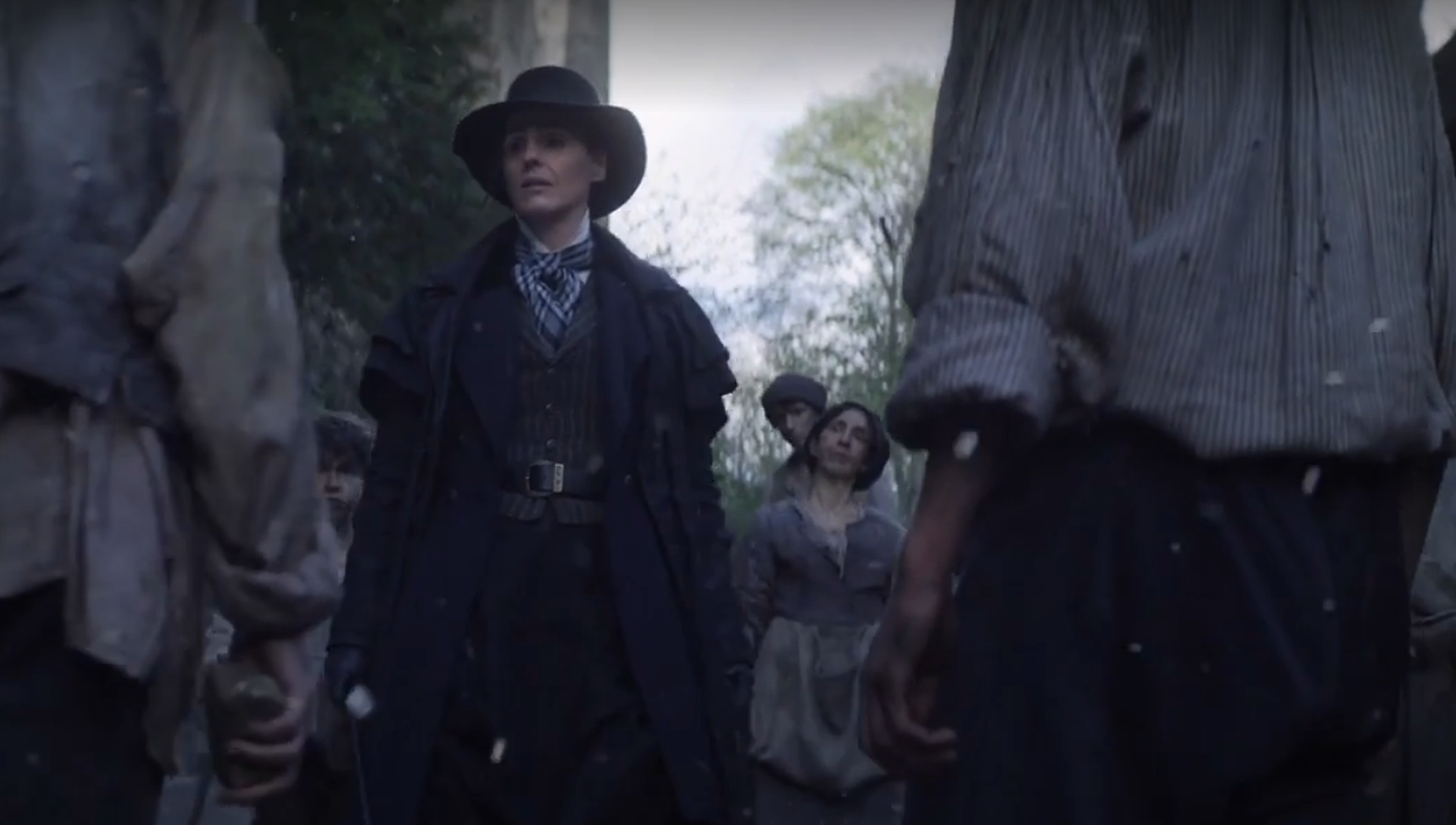 Anne is dismayed at the severe extent of damage that has occurred around Halifax and tries to take an account of everything. She and Mr. Parker then have a conversation about getting a new tenant for one of her properties, and she cleverly suggests finding someone she already trusts, as she wishes to proceed with her plans of building a hotel. Moreover, she questions Mr. Parker about his association with Captain Sutherland and is rather dissatisfied with the former’s explanations.

While returning home, Anne receives a worrisome tip about the Rawsons still stealing from her coal pits, and thus, decides to adopt a new strategy to tackle them. Furthermore, when she bumps into Mr. Hardcastle, she finally reveals to him that Christopher Rawson caused his son Henry’s accident, and apologizes for hiding it. This takes away the heavy guilt she has been feeling for a while, and she promises to help Mr. Hardcastle’s family.

Ever since Anne returns from Mariana’s, she is afraid that her wife may discover her infidelity, and therefore, she avoids talking about her trip. This makes Ann suspicious, as she wonders what transpired between Anne and her former lover. Troubles escalate further as the elections bring Anne into the limelight, which proves to be a bit detrimental to her plans of keeping her and Ann’s marriage a secret. 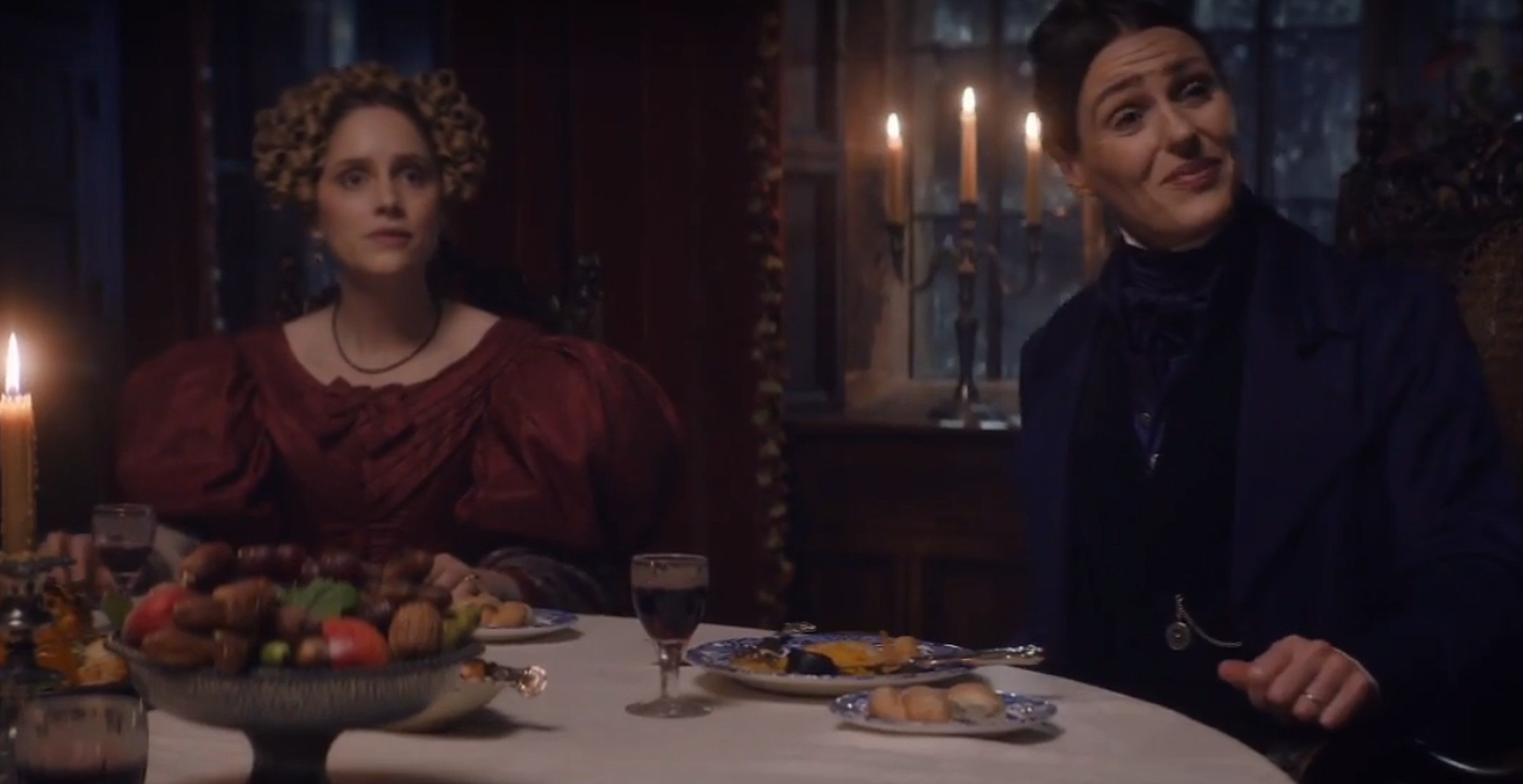 After the election, the couple’s marriage suffers another blow, when Mr. Washington shows them a week-old advertisement in the newspaper, which announces the marriage of a certain ‘Captain Tom Lister’ to Ann. Anne nervously realizes that Tom Lister is a pseudonym for her, given her masculine appearance. But seeing her wife visibly rattled, she tries brushing off the incident as a practical joke by someone. Regardless of her calm demeanor, she worries internally about who it could be and why they wish to expose her and Ann’s relationship.

Anne’s troubles worsen when Marian insists on her meeting Mr. Abbott, with whom she has suddenly reconciled. While the entire family warns her about his past record of abandoning her, Marian insists on him being a reformed man. When he comes to visit her later, he tries speaking to Anne, but she completely avoids him again and he feels belittled.

Later, Marian drops a major bomb on her sister, by announcing her engagement to Mr. Abbott, and asks for her blessing. She further justifies that though his wool business pays less, he shall remain in Halifax for better prospects after marriage. But Anne is not convinced at all and vehemently opposes the alliance. She expresses her disdain toward Mr. Abbott and tells her sibling that he is not of a worthy social status like them.

When Marian still does not budge from her decision, Anne tells her that if she marries him, the family would sever all ties with her and not attend the wedding. She further requests her to refrain from telling Aunt Anne about her engagement, as the shock would be too much for her health to take. All this makes Marian feel torn between her family and Mr. Abbott, and she worries about her next step.