How I Met Your Father Episode 1 and 2 Recap and Ending, Explained 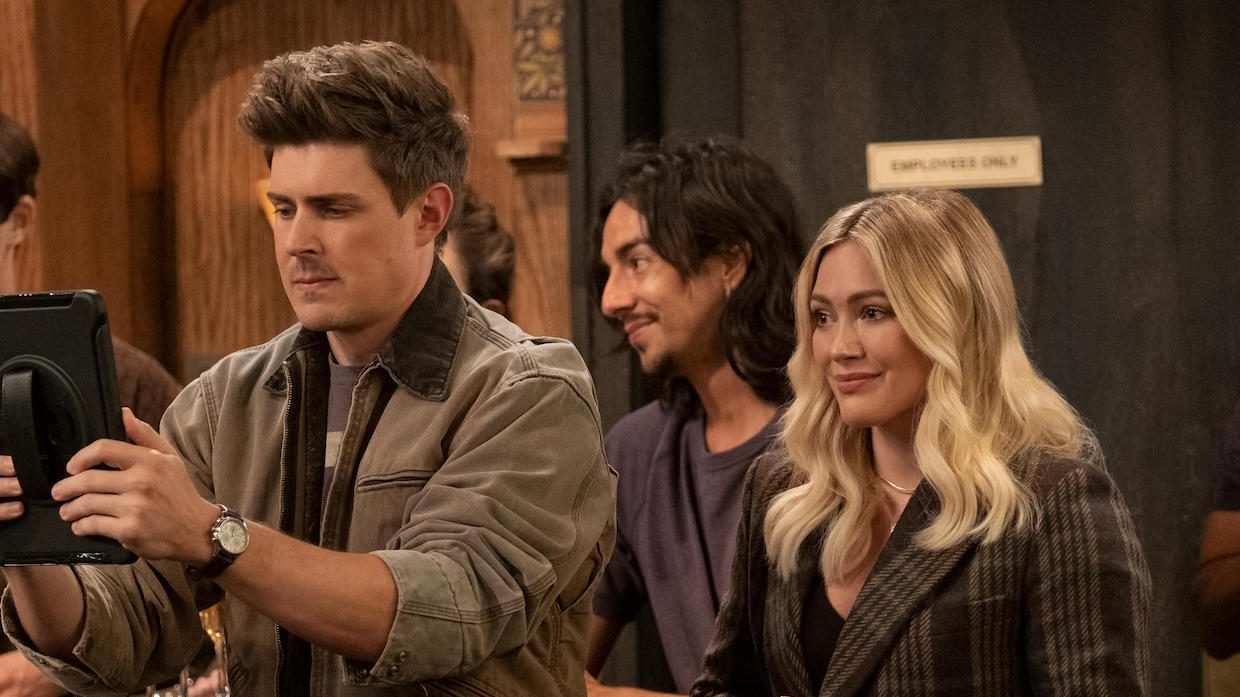 A standalone sequel to ‘How I Met Your Mother,’ Hulu’s sitcom ‘How I Met Your Father’ centers around Sophie, who recounts her experiences to tell her son the story of how she met his father. Set in the future, Sophie starts her recollection from the year 2022 and details her relationships and friendships.

How I Met Your Father Episode 1 and 2 Recap

The premiere episode of ‘How I Met Your Father’ begins in 2050, with Sophie calling her son to narrate the story of her encounter with his father. Her recollection starts with Sophie’s tinder date with a marine biologist named Ian. On the way to her date, Sophie meets Jesse, the cab driver that picks her up, and Sid, Jesse’s close friend. Upon failing to suppress her enthusiasm, Sophie tells both of them how perfect Ian is for her after a series of tragic dates she had. Sid reveals to Sophie that he is going to propose to her girlfriend and he tricks Jesse into confessing that he likes Sophie.

Meanwhile, Sophie meets Ian, but only to get disappointed. Ian informs Sophie that he is moving to Australia permanently for an assignment. The two of them decide against a long-distance relationship since they knew each other only for a short time. She returns to her apartment and realizes that her roommate Valentina has a new English boyfriend named Charlie. Valentina reveals to Sophie that Charlie is moving in with them after a fallout with his parents. Motivated by Valentina’s adventurous decision, Sophie determines to give the long-distance relationship with Ian a chance.

When Sophie picks her phone to reach out to Ian, she finds out she has Sid’s phone instead. To get her phone back from Sid and Jesse, Sophie, Valentina, and Charlie go to Sid’s bar. They witness Sid and Hannah getting engaged. She trades the phones with Sid and all of them leave for the airport. Sid sees Hannah off as she leaves for LA due to an emergency at work and Sophie finds Ian just before he boards his flight. She proposes a long-distance relationship to Ian, but he rejects her.

The second episode, titled ‘FOMO,’ centers around Sophie’s attempts to get over Ian. While Sophie struggles with Ian’s memories, Valentina reveals to Sophie that she wants to break up with Charlie due to his overwhelming presence around her. As Valentina struggles to find a definite solution, Sophie suggests a set-up where Charlie can make friends in the city. She tells her roommate that Charlie will give her space once he has other acquaintances. Sophie invites Jesse and others to a club named FOMO, believing he and Sid will become Charlie’s friends.

Thinking that Sophie is hinting at a date with him, Jesse goes to the club with his adopted sister Ellen and Sid. As the gang waits to enter the club, Sophie gets a message from Ian. When she considers replying to him, Valentina stops her. Ellen tries to find a new girlfriend after her divorce but her attempts do not yield any results. Jesse invites Sophie for a drink and she accepts but stands him up after getting distracted with her desire to reply to Ian’s message. Jesse comes to know that the invitation from Sophie was for Charlie’s sake.

How I Met Your Father Episode 2 Ending: Do Valentina and Charlie Break Up?

When Valentina realizes that her set-up to help Charlie to socialize does not hit the mark, she reveals her intentions behind the set-up to Charlie. She informs him that she wants to feel less smothered by him and adds that she thought helping him make friends is a solution. When Valentina reveals that she feels his presence overwhelming and suggests parting ways, Charlie agrees and storms off from the club.

Valentina’s maturity to realize the lack of communication on her part leads her to reconsider her decision. She meets Charlie at Sid’s bar and proposes a reconciliation. She understands that she should have communicated her need for space with him. Likewise, Charlie understands Valentina’s needs and decides to move from her and Sophie’s apartment to have a fresh start to their relationship. He realizes the significance of taking things slow and reveals to Valentina that he will ask her out for a formal date once he moves from the apartment. After assuring amends, Valentina and Charlie reconcile.

Do Sophie and Jesse Date?

No, Sophie and Jesse do not date. After standing Jesse up at FOMO, Sophie meets Jesse at Sid’s bar and apologizes. Even though she understands his intentions to date her, Sophie tells Jesse that they are not in a position to give each other a chance. Since she is having a hard time getting over Ian and Jesse hasn’t yet overcome the hangover of his ex-girlfriend and her rejection, they decide not to date and spoil their acquaintanceship.

Their fear of having another tragic date experience stops them from moving forward with each other. However, Sophie and Jesse’s encounter at the club — and the consequences — lead to Sophie getting to know him better. She comes to know that she and Jesse share a common comfort song and hangs out with him. Even though their decision is not to pursue a romance, both of them start to get comfortable with one another and become friends.

Does Sophie Message Ian Back?

No, Sophie does not message Ian back. Sophie’s search to find the love of her life ends with Ian. As she brags to Jesse and Sid, she dreams of setting up a beautiful relationship with him after getting to know each other so well. However, her wishes get shattered when Ian moves to Australia upon rejecting her suggestion to be in a long-distance relationship. Still, Ian messages her while she tries her best to get over him.

Even when Valentina stops Sophie from messaging Ian back, she considers it. When she meets a Jason Momoa look alike at the club, she tries to take a picture of the guy to send it to Ian to continue their thing of sending images of the people who resemble the actor. After much deliberation, Sophie decides against doing so. She understands the danger of going back to Ian and stops herself from another tragic relationship experience she can predict beforehand. Rather than succumbing to the temptation, she clears the message she has written for him and spends the night with her new gang.

Read More: Is Neil Patrick Harris’ Barney Stinson in How I Met Your Father?