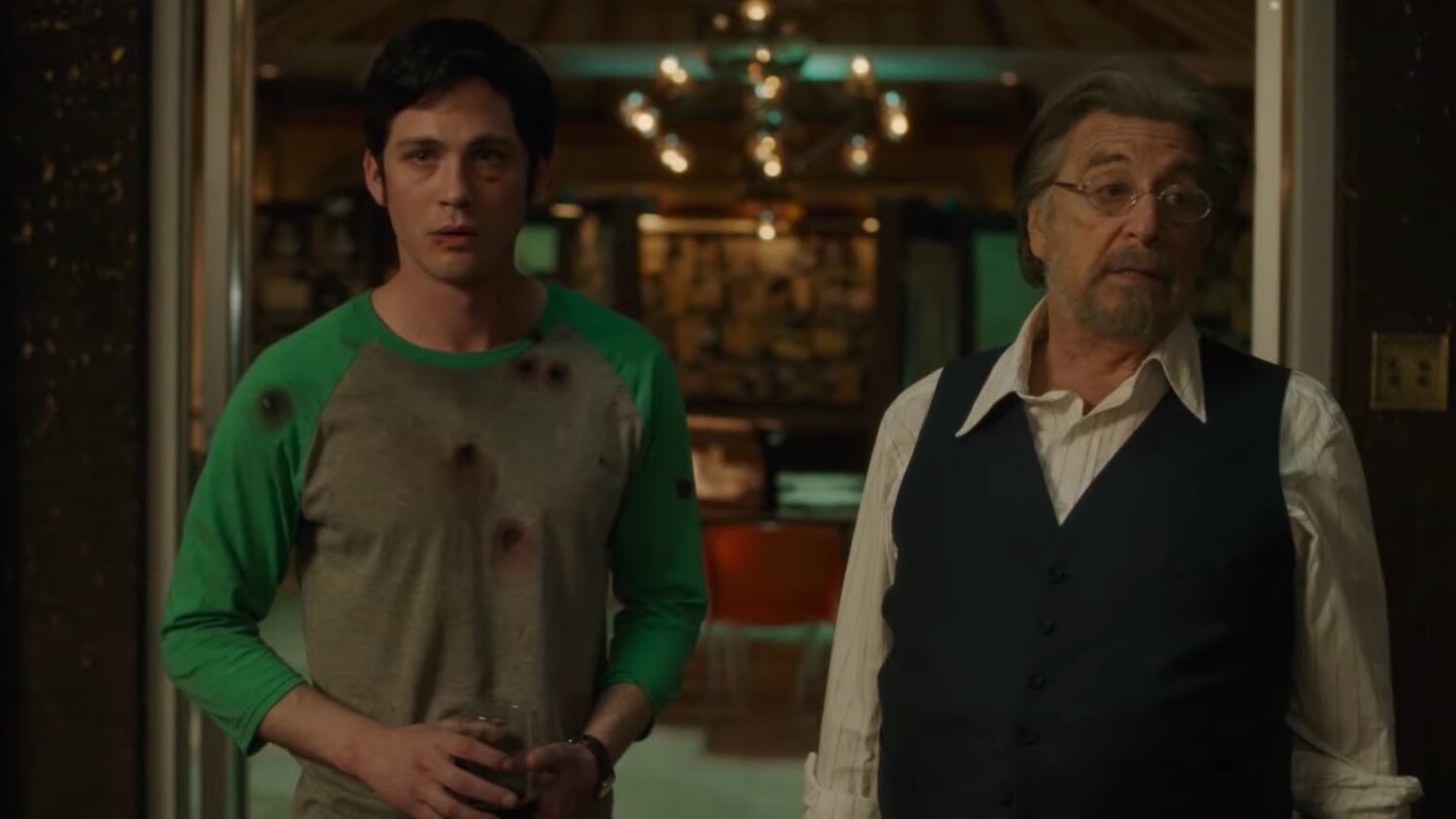 Amazon’s ‘Hunters’ has been a rollercoaster ride….as in, it has been on a persistent journey of ups and downs. It is becoming increasingly tough for viewers to gauge whether the show has found its stride or not, but it surely has some redeemable moments worth watching for. To be fair, it has also ceased being a conventional series despite its overdone premise.

Al Pacino stars in the series as what could be described as a non-mutant version of Professor X, leading a team of Nazi hunters in 1977 USA, amidst a Fourth Reich Conspiracy. Logan Lerman is also a part of the movie’s cast, playing yet another boyish character.

While the series promised tons of action, it seems to have settled into a study of character motivations and ethics. Such kind of thematic ambition might have been expected due to Jordan Peele being the executive producer. However, instead of making the tale richer, these digressions have only slowed its pace down. SPOILERS AHEAD.

The third episode begins with Morris being followed by Travis Leich into a church. Meanwhile, the team rummages through Holstedder’s possessions, looking for a lead. Lonny, Roxy and Joe are keeping an eye on Holstedder’s house and notice a presence inside. Roxy ends up finding a female assassin inside the house and kills her after an intense fight. There are no traces of Holstedder’s body though.

Mindy and Murray are tasked with decoding the recordings for any subliminal messages. Joe and Sister Harriet find out that a couple of keys found at Heinz’s and Holstedder’s place are identical. Sister Harriet mysteriously calls someone using a public telephone, saying “They’re closer,” in German. Could she be a double agent!?

The Nazis are shown making bombs. Offerman visits Jonah’s comic book store to convince him to re-join the team. However, Jonah does not want to do that. Biff tries to plot against the Colonel with Travis, but the latter is not interested. Meanwhile, Jonah patches up with his friends, Arthur and Sherman as the three smoke weed. Jonah feels relieved at first due to the pot, breaking out into a dance number to the tune of Bee Gees’ ‘Stayin’ Alive’ in his imagination. However, he sees a younger version of his grandmother towards the end.

Morris now suspects that there are Nazis in the United States and that they are being killed by someone. She visits Heinz Richter’s store to investigate the crime scene. By studying the injuries on Heinz’s body, she concludes that he had been killed by two people.

Additionally, she finds a Nazi medal in Richter’s possessions. Travis follows Morris to the crime scene, dressed up as a police officer. He steals Jonah’s name tag from the coat that he had left at Heinz’s. When he calls the Colonel to share his findings, she asks him not to kill Morris soon as she is trying to find the Nazi-killers just like the Nazis.

Jonah visits Murray and Mindy. The couple tell Jonah that his grandmother had a complicated relationship with Meyer. Later, Murray is able to spot a Morse code in the recording’s background. The translation reveals several dates when various tragedies like JFK’s assassination took place. Finally, another Morse message reveals a date two weeks in the future, indicating the possibility of something tragic about to take place.

Jonah visits his friend, Carol. At this time, Travis goes to Jonah’s house (he stole his nametag, remember). Since he is not home, Travis goes to the comic book store and asks Arthur where Jonah is. Arthur lies to him, telling him that he is Jonah. Travis shoots Arthur, minutes before Carol and Jonah reach the store.

As mentioned earlier, ‘Hunters’ has been like a rollercoaster ride, oscillating between build-ups and pay-offs that just about miss the mark. The first episode followed the character of Jonah painstakingly followed by a more action-heavy second episode. However, the third episode follows Jonah’s inhibitions and ethical reservations regarding the unflinching Nazi hunt.

The second episode seems to promise the series becoming more action-oriented. However, that does not materialize in the third episode. Viewers will probably find themselves being frustrated at Jonah’s unwillingness to join the action. ‘Hunters’ has taken the theme of morality too seriously and it just does not bode too well for the premise. Nazis will continue to be ready-made antagonists and viewers will only be able to empathise with Jonah feeling humanely towards them to a certain limit.

However, the episode does end with a shock: the death of the beloved Arthur. It would be logical to presume that Jonah would be on-board with Offerman’s team for good. However, that was also what the first episode seemed to promise. In many ways, the second episode pays off, but the third episode is a U-turn. Here’s hoping ‘Hunters’ has settled the ethical arc once and for all. On the other hand, the Nazi-of-the-episode format is not followed in this episode. Hence, ‘Hunters’ also backtracks a little when it comes to a general narrative direction/set-up.

Additionally, the show has also been compared to “The Avengers” for its vigilante team premise. Interestingly, ‘Hunters’ provides a crucial argument to the Martin Scorsese-Marvel debate (Scorsese compared Marvel movies to theme parks). Scorsese might be arguably correct about the superhero movies not shedding light on the emotional and psychological experiences of humans. But that would certainly not fit the Marvel (or even DC) mold and compromise its entertainment value.

‘Hunters’ is a tale that should have followed Marvel’s philosophy due to its plot. Yet, in an attempt to make the story more profound, the Amazon show loses sight of its path. Perhaps, it should have stuck to more chitty-chitty bang-bang to impress the masses instead of trying to plant its feet on two different battlefields.