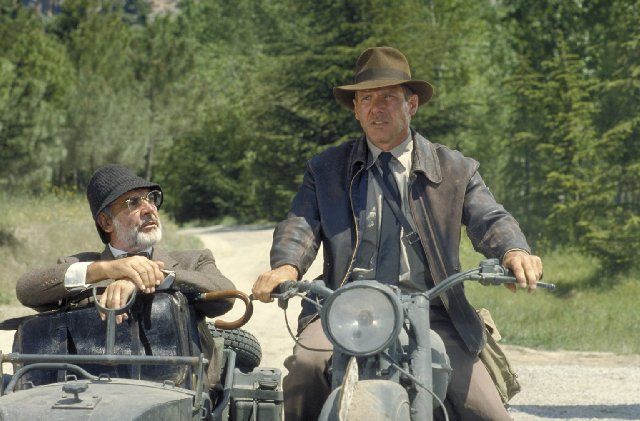 Few media franchises manage to charm audiences and critics alike. ‘Indiana Jones‘ is an extremely popular swashbuckling movie and television show series that manages to do both rather handsomely. The franchise has names like Steven Spielberg and George Lucas attached to it behind the camera, while an equally talented group of performers are seen on the screen. ‘Indiana Jones and The Last Crusade’ is the third movie of the ‘Indiana Jones’ franchise and a sequel to the first film, ‘Raiders of the Lost Ark’ (the second movie in the series is a prequel to the first one).

‘Indiana Jones and the Last Crusade’ adds the titular character’s father to the mix, developing the protagonist further. It revolves around Jones’ father having disappeared on his search for the Holy Grail. Jones decides to find him before the Nazis do. Harrison Ford reprises his role as Indiana Jones. Sean Connery is roped in to play the role of his father, Dr. Henry Jones. Denholm Eliot makes a return to the franchise as well. Spielberg serves as the director while Lucas has co-written its story.

‘Indiana Jones and the Last Crusade’ is a truly globetrotting movie. Its action takes place all over the world, in some truly exotic places like Portugal and Venice, among others. Being a Spielberg film, the action is captured exceedingly well on camera. Hence, it is natural for viewers to wonder where the movie has been filmed.

Within the USA, several places feature in ‘Indiana Jones and The Last Crusade.’ The opening scene of the movie revolving around a young Indiana Jones was fined in Utah. To be more precise, this scene was shot in Arches National Park near Moab. The heritage railroad, Cumbres and Toltec Scenic Railway was used to film the train sequence in the beginning. A part of this scene was also filmed in Durango-Silverton Narrow Gauge Railroad in Colorado. Within Colorado, filming also took place in Cortez, Pagosa Springs, and Alamosa.

Day 1: Movie set in or filmed in Colorado

Additionally, the scene set at the Berlin Airport was actually filmed at the Administration Building on Treasure Island in California. The final scene of the movie, which sees Indiana and Henry Jones, Marcus and Sallah ride off into the sunset, was filmed at Figure 3 ranch near Clyde, Amarillo in Texas. Moreover, the motorcycle chase sequence was shot at Mt. Tamalpais State Park in Marin County, California.

Several scenes of ‘Indiana Jones and The Last Crusade’ were filmed in the United Kingdom. The boat scene, which is set off the coast of Portugal, was actually filmed at Elstree Studios in Hertfordshire. This also where the boat chase scenes set in Venice were filmed, according to the following tweet. According to the other sources, the Venice boat chase sequence was also partially filmed in the area around Grand Canal and Doge’s Palace, and Tilbury Docks in Essex. Various other scenes were also filmed at Elstree Studios.

Next, The Royal Masonic School for Girls in Rickmansworth, England, is where the scene showing Indiana Jones teaching was filmed. The book-burning scene in Berlin, on the other hand, was filmed at Stowe School in Buckingham. Filming was also carried out at Blenheim Palace in Oxfordshire, Royal Horticultural Halls & Conference Centre in London, Woodstock, and North Weald in Essex.

In Italy, according to a few sources, a part of the boat chase sequence in Venice was shot. Apart from that, in Venice, filming was also undertaken at Church of San Barnaba, Palazzi Barbaro, Fond Dogana alla Salute, and Campo della Salute. Moreover, a few scenes had also been shot at the Danieli Hotel in Venezia.

Guadix train station in Spain, where the Iskenderun sequence from Indiana Jones and the Last Crusade was filmed. pic.twitter.com/o0KwDk7uqI

In Germany, the exterior of the Castle Brunwald was shot at Rheinland-Pfalz in Mayen. The Grail temple exterior, on the other hand, was shot at Al Khazneh in Petra, Jordan.

Read More: All the Details We Know About Indiana Jones 5