Interview With the Vampire Episode 1 Recap and Ending, Explained 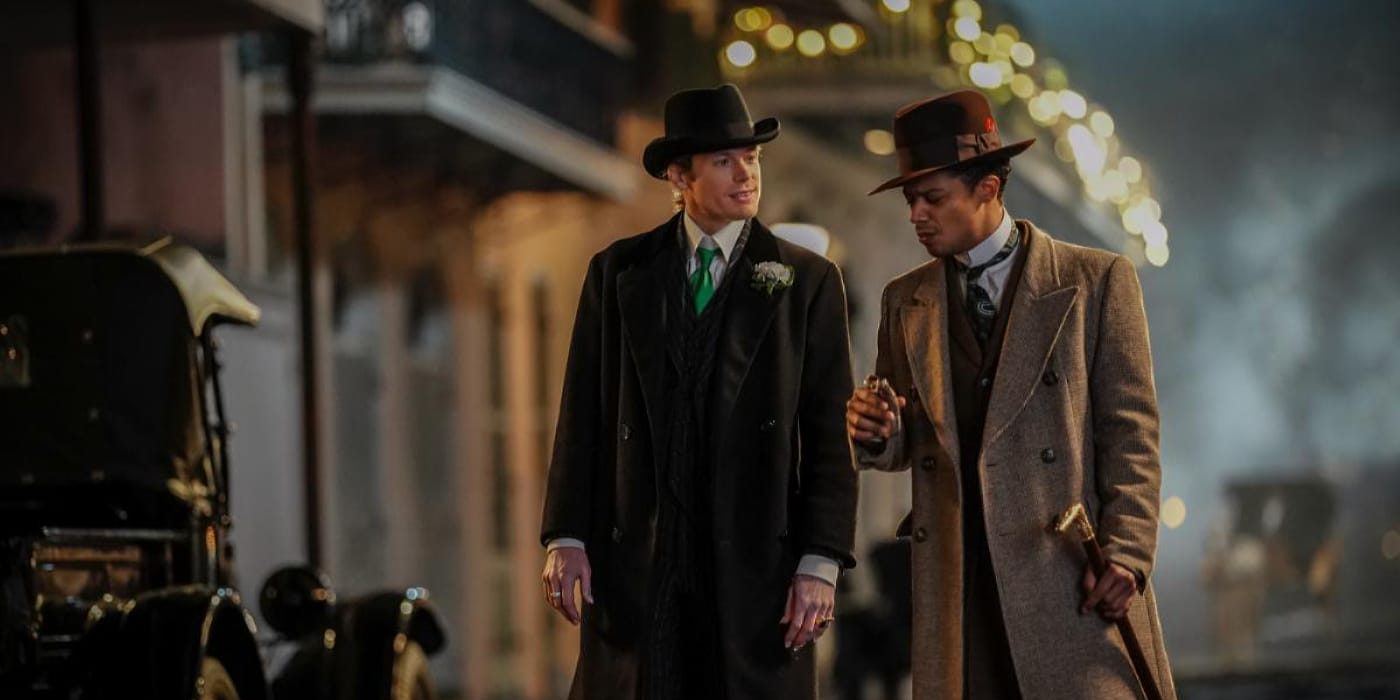 In the premiere episode, titled ‘In Throes of Increasing Wonder…’ Louis recounts his experiences as a Black man in 1910s New Orleans, especially those with the mysterious and sinister Lestat de Lioncourt. Naturally, viewers must have plenty of questions about Louis’ past and relationship with Lestat. In that case, here is everything you need to know about the ending of ‘Interview with the Vampire’ episode 1! SPOILERS AHEAD!

Interview With the Vampire Episode 1 Recap

The series premiere episode, titled ‘In Throes of Increasing Wonder…,’ opens with journalist Daniel Molloy entering the final stages of his journalism career and publishing a book about his experiences in the profession. He receives a letter from Louis de Pointe du Lac, who invites the aging journalist to his manor. During their meeting, we learn that Louis is a vampire. He is upset about Molly excluding his story from the memoir. Molloy presents practical reasons for the exclusion and demands that Louis gives him an unfiltered and detailed narration of his life, especially after turning into a vampire. Louis agrees, thereby starting the titular interview.

The story shifts to 1910s New Orleans as Louis describes life after his father’s death. Being the eldest son of an African American household with several business ventures, Louis was forced to take over his father’s responsibilities. He runs a brothel while providing for his brother, Paul, who aspires to be a priest, sister, Grace, who is getting married, and mother. While Louis is not satisfied with his life, he maintains a tough facade as several livelihoods depend upon his shoulders.

One day, a French businessman Lestat de Lioncourt notices Louis in the streets of New Orleans and is enamored by the man’s beauty and personality. Soon, Lestat formally introduces himself to Loius, and the two men start to learn more about each other under the pretext of looking for investment opportunities in the city. Louis realizes that Lestat has a way of messing with his head and hearing his thoughts. However, Lestat consistently plays down the situation. Eventually, Lestat uses one of Louis’ brothel workers to trigger a steamy hook-up between them. After the incident, Louis realizes the otherworldly nature of Lestat’s powers and decides to maintain a distance between the two. However, a tragic event forces Louis to face his feelings and Lestat once more.

Interview With the Vampire Episode 1 Ending: Why Does Louis Accept the Bite?

After cutting ties with Lestat, Louis returns to his usual life but starts feeling trapped. However, he looks forward to Grace’s wedding and concentrates on expanding his business. During Grace’s marriage, the de Pointe du Lac family has a great time, and Louis dances with his brother, sister, and friends. After the reception, Paul and Louis climb on their house roof to watch the sunrise. The brothers, who have opposing ideologies, have a heart-to-heart conversation on the roof and seem to resolve their issues. However, Louis is shocked to see Paul jump off the roof and die by suicide. His brother’s death leaves Louis in a dark place, and he starts introspecting about his life.

Louis’ mother blames Louis for Paul’s death, and Louis is himself overcome with guilt as he could stop his brother from jumping off the roof. As a result, Louis goes to the church and confesses all the sins he feels he has committed. During Louis’ confession, it becomes evident that his tough exterior is merely a facade, and his soul is crushing under the tremendous expectations and responsibilities. For the first time, we see the hollow shell of the man that Loius has become. Moreover, he lacks the courage to end his life, making his situation all the more miserable.

After completing his confession, Louis realizes that the priest is dead, and he finds Lestat sucking the blood out of the man. As Louis tries to escape, Lestat barbarically murders the other church patrons. In the end, Lestat confesses that he wants Louis to join him as his companion and slowly seduces Louis to accept the bite. He compares the bite to the sweet release of death that Louis craves. Hence, Louis accepts the bite. However, Louis unwittingly traps himself in the misery of eternal life by agreeing to join Lestat.