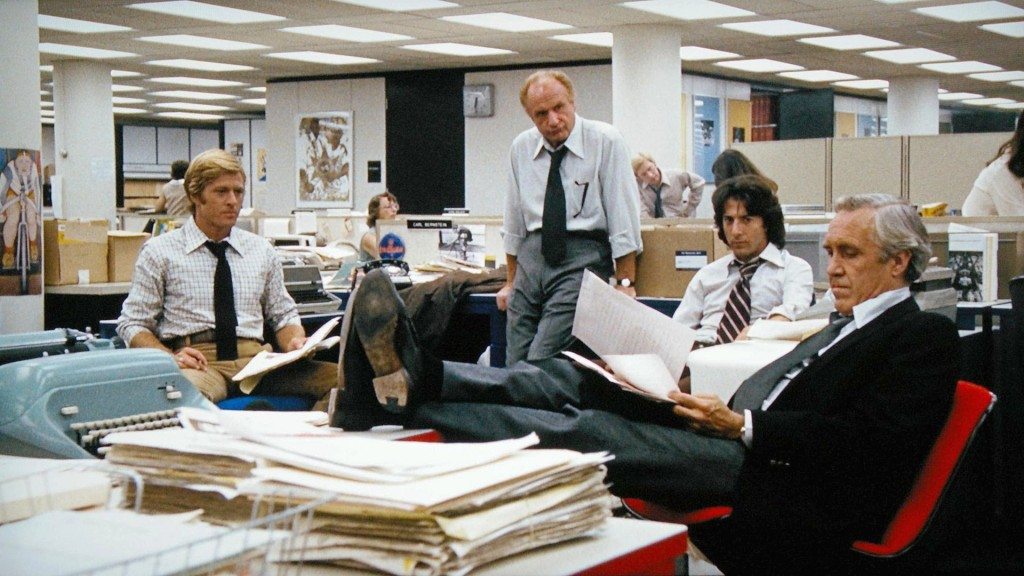 While defining Investigative Journalism in her book ‘Digging Deeper’, the author Sheila Coronel makes it clear that it’s not about the leak journalism or the insanely mad Paparazzi journalism that constantly invades personal space. It’s neither single source reporting nor the misuse of information. It’s about holding the powerful accountable and exposing how laws and regulations are violated in the garb of policies. It’s watchdog journalism that keeps the meek safe from the oppressor. At times, it’s the greed that drives the newsmen and we come across some astonishing cover-ups.

All said and done, the concept of ‘Investigative Journalism’ has often stimulated the grey matters of filmmakers and from that, some fine cinema have generated. Well dear readers, we at The Cinemaholic, give you the list of top investigation journalism movies ever. You can watch some of these best investigative journalism movies on Netflix, Hulu, or Amazon Prime. 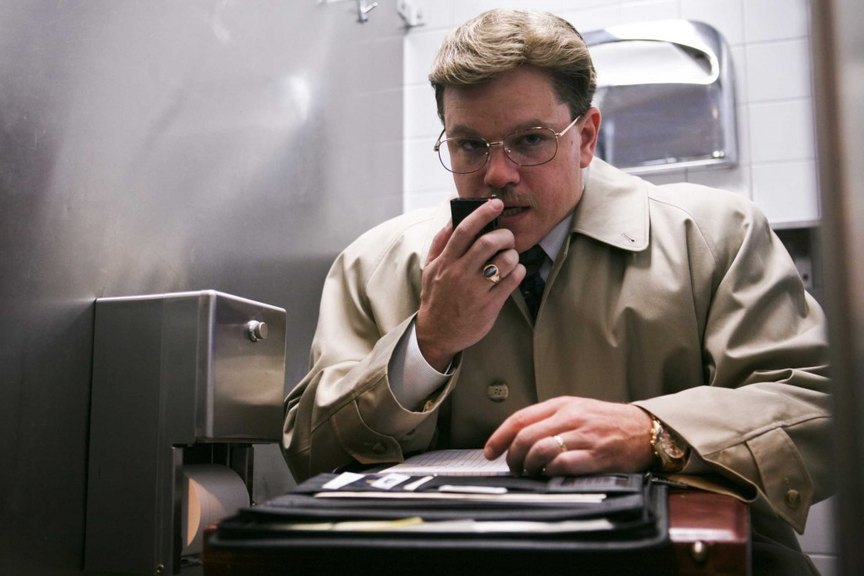 This is a classic example of how not to do an investigation. Mark Whitacre, a high ranking official at an agri-industry giant turns a whistleblower to expose his company’s illegal price fixing policies to the FBI. While Mark prides himself on him being a hero for doing the right thing, his bipolar disorder makes it increasingly difficult to continue and he ends up embarrassing himself in front of the FBI. Soon it’s found out that Mark, while aiding FBI, actually defrauded $9 million from his company! Eventually he receives a federal prison sentence, three times longer than the other conspirators. Directed by Steven Soderbergh and starring Matt Damon in the titular role, ‘The Informant!’ is based on actual events and is a completely laugh riot. While you chuckle at the idiosyncrasies of Whitacre, it also forces you to ponder over the deceptive layers of human emotions, of considering what’s right and what’s not. 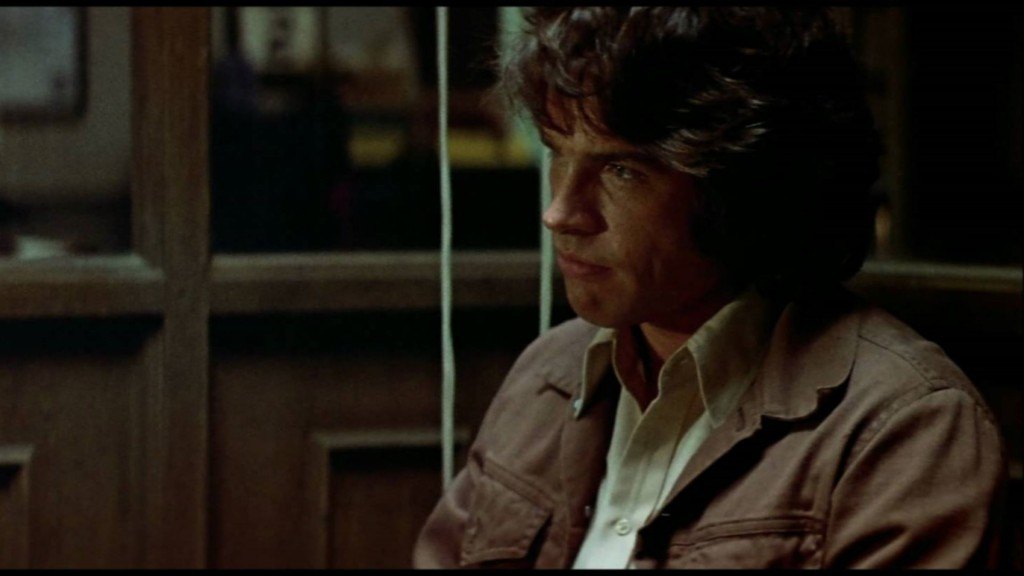 When a presidential candidate is shot dead by a lone gunman who eventually falls to his death, it looks like a open-and-shut case and thus gets closed by a special congressional committee. But in the next few years, when the witnesses of this event begin to die under strange circumstances, the case becomes murkier. At the behest of a remaining witness, an undercover reporter starts his investigation and  soon ends up in a web of deceit and lies, that of the Parallax Corporation. Alan J. Pakula’s ‘The Parallax View’ gives basis to the much believed theory of insider hand behind the killings of the Kennedy Brothers. It openly throws the question that what if the Govt is not run by the elected people but by some unknown powers having the ability to bump anyone questioning them. Released to mixed reviews and starring Warren Beatty, who gave a career defining performance, this movie has become a cult favourite over the years. If you are willing to watch this, let me warn you – It does not have a happy ending. 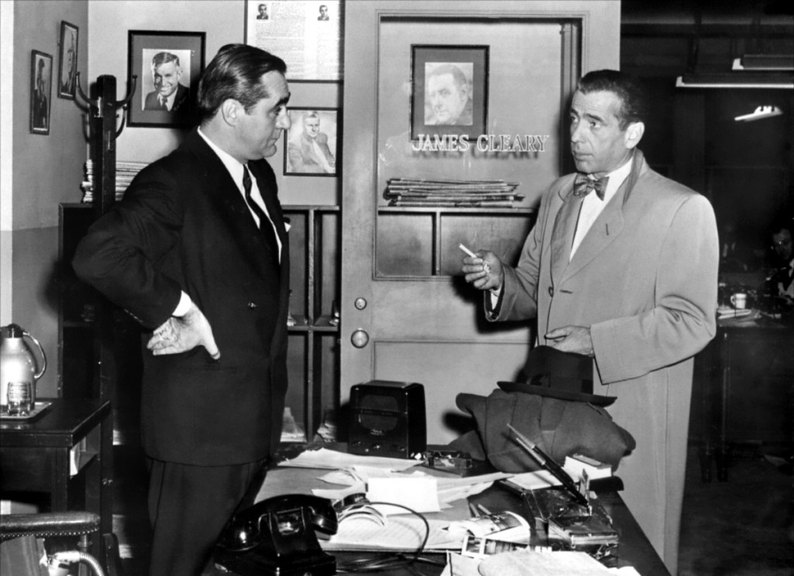 A soon to be sold newspaper goes for the final fight against all odds and locks horn with a gangster for reporting his illegal deeds. While the chief editor Ed Hutcheson is dealing with a shit load of problems of his own, he also needs to save the newspaper from being sold. All hell breaks loose when the investigation of a dead woman implicates the gangster. Now a bloodthirsty gangster is determined to weed out all evidences against him and the only way to stop him is to ‘print the story’. Starring Humphrey Bogart and directed by Richard Brooks, this movie is a classic in all senses. It explores the idea of continuously blurring of the line between fact and fiction in the newspapers and how people want all the mundane stuffs such as contests, gossips, horoscopes but the news. 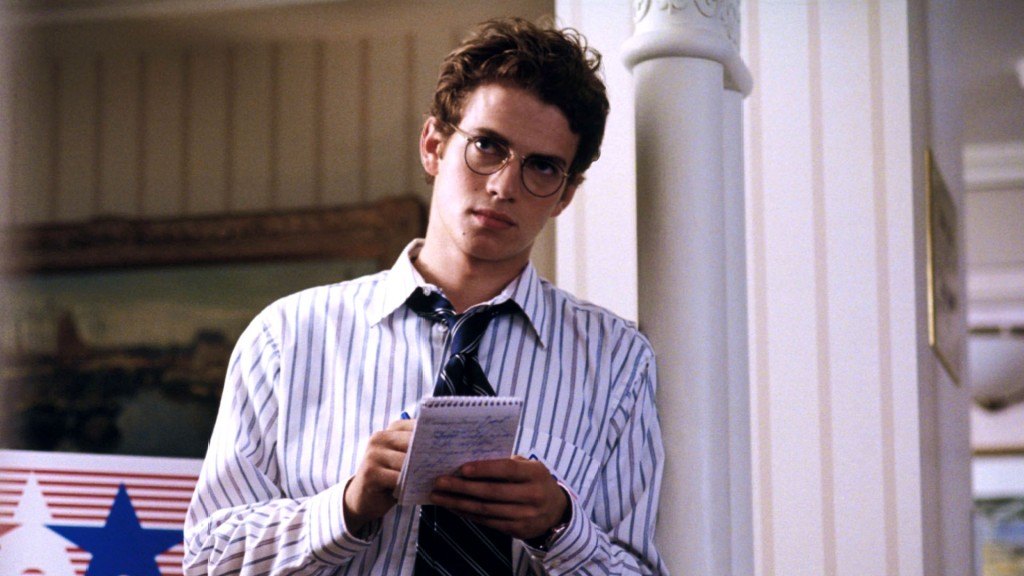 Remember the basics of journalism? It is about bringing in the facts and summarising it to form an opinion. But what if the entire premise of the fact is based on fabricated details? Can the news be a white lie? Based on actual events, Billy Ray’s ‘Shattered Glass’ tells the story of Stephen Glass who wrote for ‘The New Republic’ and was found out to be fabricating details for most of his stories. While Mr. Glass was definitely not the first of his ilk to do so, his practice of unethical journalism was widely reported, earning him much infamy. The movie depicts the last days to his damnation. 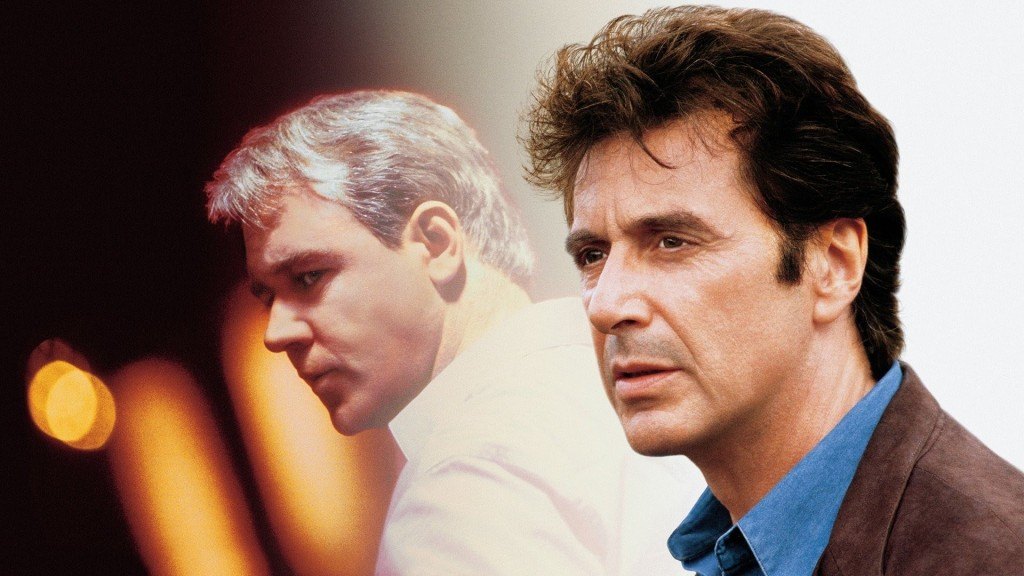 In the year 1995, CBS aired a controversial segment of 60 Minutes, where a watered-down take on the growing influence of the tobacco industry leaders was discussed. In the centre of this, was Jeffrey Wigand, an ex-employee at the Brown and Williamson. At first it was an abridged version hiding much of the facts but when the leading investigator and journalist Lowell Bergman questioned their own ethics of suppressing the truth, CBS was forced to showcase the actual investigation which was a blow-by-blow account of Wigand’s experience as the whistleblower of the corruption at the B&W. Nominated for seven (7) Academy Awards, Michael Mann’s ‘The Insider’ is solid, taut storytelling about investigative journalism, making it a compelling watch. 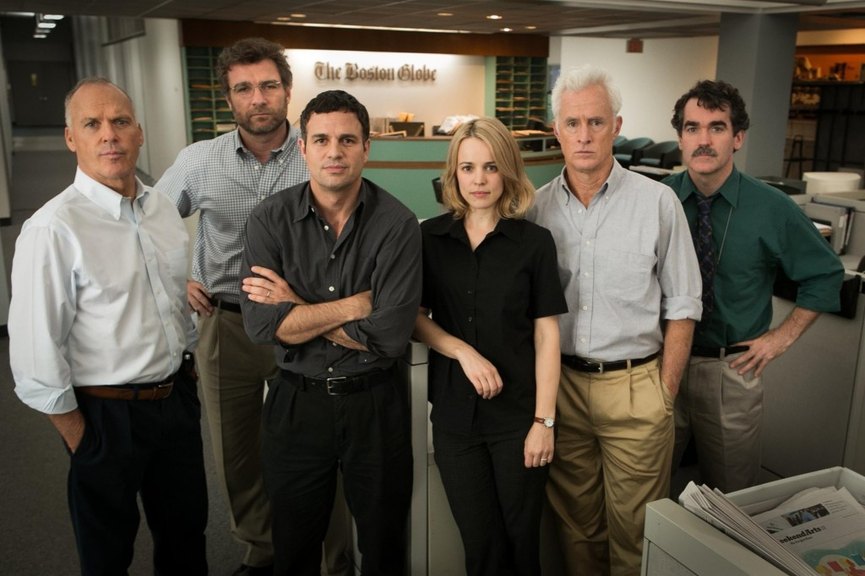 Religion is a little tricky. People turn to God in faith. Anything which remotely resembles the God, automatically goes high up in the mantle. That includes the priests too. But when the same priests end up molesting little children, then people start questioning the justness of God. The Academy Award winner for being the best movie of the year 2015, Tom McCarthy’s ‘Spotlight’ is one of the finest movies ever made about the investigation of the sexual abuse of children in Boston, by the Roman Catholic priests. Mind you, there is nothing sensational about the film, but the way the subject has been handled with a razor sharp precision, it makes the viewer cringe and ask himself some very difficult questions. 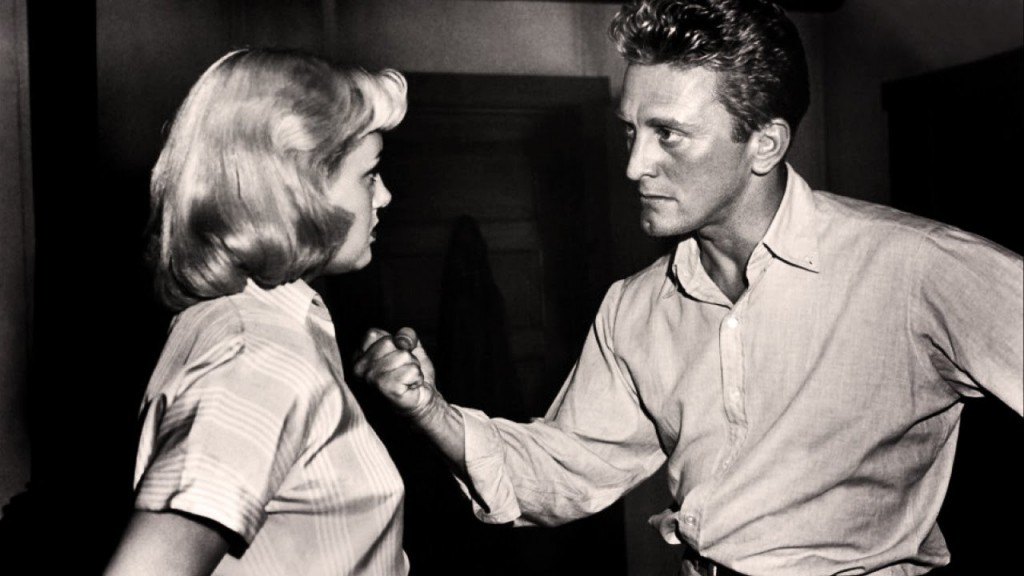 The circus that sells the most is the one with media. The frenzied media goes to any extent to cover the ‘news’. And at times, news are created out of others’ miseries. Kirk Douglas starrer, ‘Ace In The Hole’ speaks about one of the oldest trick in the kitty of journalists and that is to make news from nowhere. A corrupt news reporter, freshly thrown out of his job, gets a chance to get back  to the limelight when he discovers a man trapped in a cave collapse. In the guise of bringing the man’s plight to others’ notice, he plays a series of dirty games and on purpose, slows the rescue work. As news gets spread, people flock to the town and a carnivalesque situation is created. But as days progress, the rescue becomes increasingly difficult and soon the trapped man dies. A satirical take on the ever decaying human psyche is what Billy Wilder’s ‘Ace In The Hole’ all about. 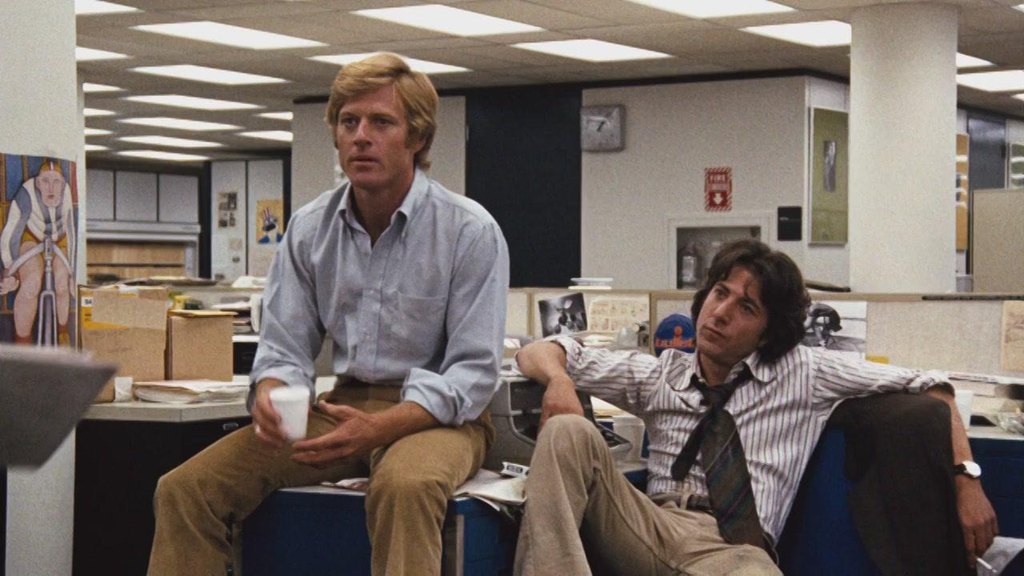 Watergate. One word that brought the curtains down on Richard Nixon’s presidency and made people believe that even the president can stoop to any extent, to get his thing. There were two reporters who worked tirelessly, pursued even the tiniest of the leads and at times brought danger upon themselves in the process to get the facts to the people. Based on the book of the same name, written by those two reporters, Bob Woodward and Carl Bernstein, ‘All the President’s Men’ is an accurate observation of what true journalism should be. Directed by Alan J. Pakula, this was nominated for eight (8) Academy Awards, eventually winning three (3) and incidentally losing the best picture to ‘Rocky’. 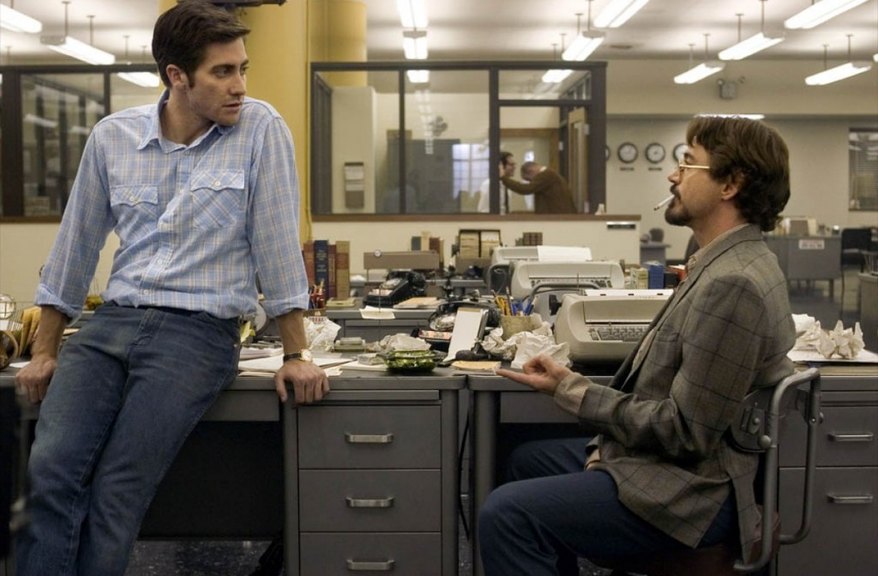 In the late sixties/early seventies, a serial killer was roaming loose on the streets of San Francisco. Each of his killings was followed up by an encrypted letter to the local newspapers, taunting the police to crack them. While the police were unable to find the killer, two journalists took it on themselves to solve the mystery. Obsessed with the killer, they dedicated their lives to solving this case. Many suspects were named, in fact one particular suspect was almost zeroed in. However due to inadequate evidence, he could not be incriminated. Such was the enigma behind the murders and the murderer that till date there are several news occurrences of people confessing to be the infamous killer. Director David Fincher tells a chilling tale about the most infamous and still not caught serial killer of the modern era – Zodiac. 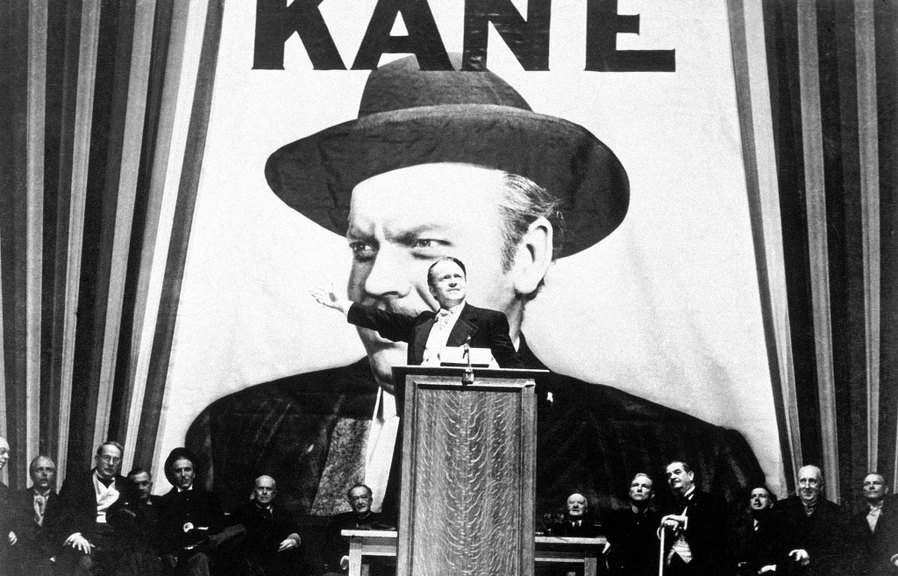 Why is one of the greatest movies of all time ranked one in this list? Well the answer is ‘Rosebud’. Perhaps one of the most enigmatic moments in cine history is when the true identity of Rosebud is disclosed. In a way, Charles Foster Kane lived his life full of vanity and glitz of the world. However, when he died uttering the word Rosebud, it becomes a mystery. ‘Citizen Kane’ is a memoir, told in flashbacks, through the eyes of a journalist, entrusted with the responsibility to find out the mystery behind Rosebud. Every viewer has taken home a different meaning of it. And that’s the beauty of Orson Welles’ ‘Citizen Kane’.