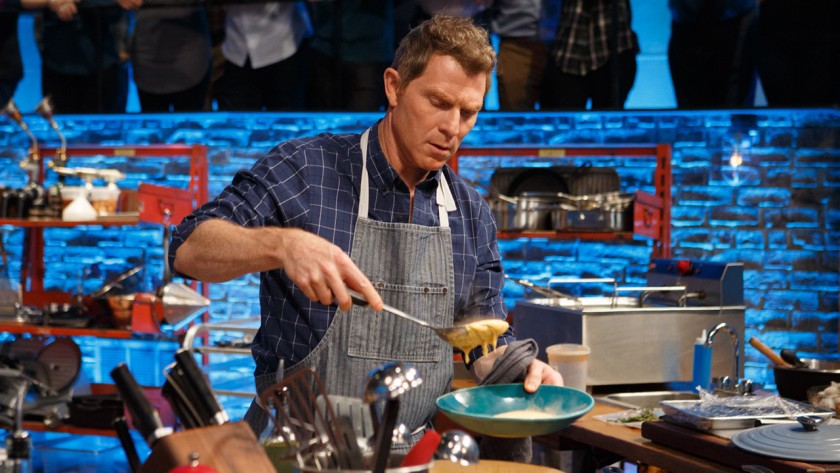 Robert William Flay, better known as Bobby Flay, is a legendary chef who has been a part of Food Network since the early days of its programming. The restaurateur and reality personality was raised in the Upper East Side of Manhattan, New York, before he dropped out of school at the age of 17 to pursue a career in the food business. He eventually earned a degree in culinary arts and went on to do wonders, quickly landing himself a deal to be a staple on Food Network’s extensive roster. However, after being with the media company for 27 years, it seems like Bobby is now parting ways with them for good. Here’s what we know about the matter.

Bobby Flay initially appeared on Food Network back in 1994, when he was locally known for his work at New York’s Mesa Grill, and the cable channel had been on television for less than a year. From 1996, he took on the role of host for his programs, from ‘Grillin & Chillin,’ ‘Food Nation,’ and ‘Boy Meets Grill’ to ‘BBQ with Bobby Flay,’ ‘Brunch @ Bobby’s,’ and ‘Beat Bobby Flay.’ Most recently, apart from being a judge on productions such as ‘Chopped’ and ‘Worst Cooks in America,’ he also starred with his daughter Sophie in a show called ‘The Flay List.’ Despite all this, it looks like Bobby Flay is leaving Food Network behind and will see what ventures he could pursue next.

After 27 years, Bobby Flay is reportedly saying goodbye to Food Network at the end of 2021 following failed contract negotiations with the channel. As per Variety, they clashed when it came to finances and could not agree on which side was more practical. So, Food Network decided to walk away instead of attempting to meet in the middle. With that said, Bobby’s departure has not been officially announced, and his representatives told the renowned media company that they couldn’t say anything owing to a “policy of not commenting on active negotiations” on deals.

On the other side, sources close to Food Network claimed that the decision of not retaining the celebrity chef is final despite potential future discussions and hardball tactics coming into play. The Discovery-owned firm allegedly no longer wants to rope in Bobby to be the face of their cable channel and will instead head down in another direction. Albeit, that’ll be hard to do, considering how he is not just a skilled chef with 35+ years of experience, but he also has an entertaining and earnest personality, making him one of a kind. That’s why he’s on the Hollywood Walk of Fame.

In addition to owning and operating several restaurants across the nation, serving everything from burgers to steaks to French cuisines, Bobby has also penned and published over a dozen cookbooks. The most recent one is ‘Beat Bobby Flay: Conquer the Kitchen with 100+ Battle-Tested Recipes: A Cookbook.’ He has a podcast and is a proud father as well.

So, it appears as if Bobby’s plate will still be pretty full if his association with Food Network comes to an end after 2021. The chef can expand his wings in these ventures or find another network to continue sharing his skills with the world; that’ll be up to him. However, the fate of the shows featuring him that are still on air on Food Network is unclear.