Is Gladiator Based on a True Story?

In the year 2000, Ridley Scott’s ‘Gladiator’ took the world by storm. It raked in big bucks, earned 5 Academy Awards among other accolades, and solidified its place as one of the most successful historical epics in cinematic history. The movie follows the story of Maximus (Russell Crowe), a Roman General unjustly subjected to a life of slavery by a power-hungry emperor, Commodus (Joaquin Phoenix). It also stars Oliver Reed (Proximo), Djimon Hounsou (Juba), and Connie Nielsen (Lucilla) in major roles.

Since its release, ‘Gladiator’ continues to be lauded for its groundbreaking depiction of ancient Rome by going beyond the confines of the sword-and-sandal films of the olden days. Undoubtedly, the movie instills awe and shock in the minds of the viewers with its bold, beautiful, and brutal scenes. Could it be that the horrors and wonders in the movie are simply figments of the imagination? Or are they the stone-cold facts of history? Let’s find out whether ‘Gladiator’ is based on a true story.

Is Gladiator a True Story?

‘Gladiator’ is partially based on a true story. David Franzoni based the screenplay of ‘Gladiator’ on the 1958 book titled ‘The Way of the Gladiator’ (initially released as ‘Those About to Die’) by Daniel P. Mannix. The book — primarily factual but with a little bit of guesswork mixed in — goes into unsettling detail about the cruelty showcased at the gladiator games, chariot races, and other cruel forms of entertainment that exploited humans and animals in the years that saw the rapid expansion of the Roman Empire. 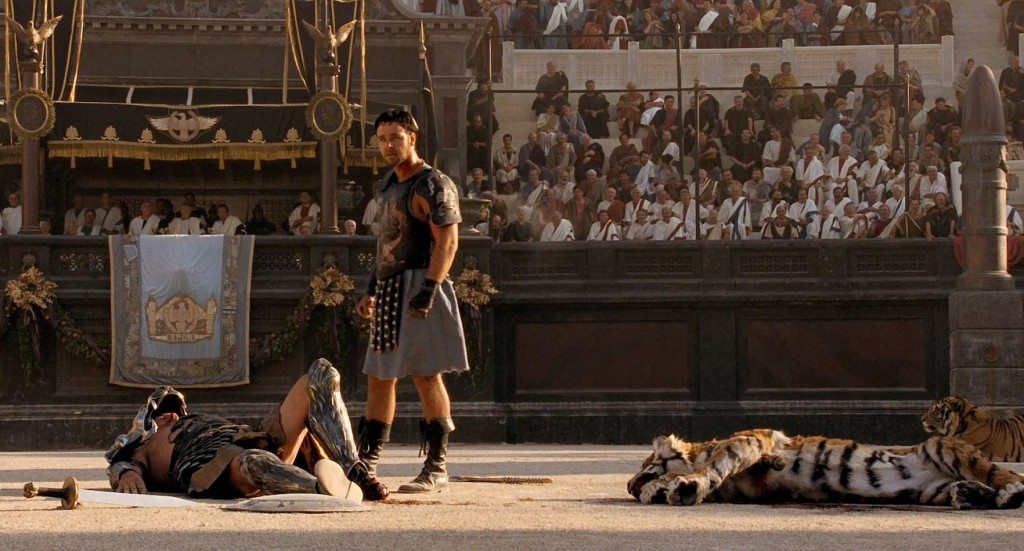 Franzoni was first introduced to the book during his motorcycle trip across the world. “The Romans had this unique vision of themselves — they were born monsters and proud of it,” he stated, of his takeaway from the book. No doubt it is these monsters that come to life on the big screen with ‘Gladiator,’ through characters such as Commodus. On the other hand, director Ridley Scott was stirred by ‘Pollice Verso,’ an 1872 painting of a Roman gladiator that producer Walter Parkes had shown him.

“Parkes opened a picture of a painting by a fellow called Jean-Léon Gérôme. It shows the armored man with the tuna-fork that would kill you, standing over a netted victim. He’s looking up at a black marble wall, at this purple-faced Nero out of his mind on wine or water. He’s got a thumbs down, and I stared at it for a moment and it was like a flash,” said Scott, talking about the moment inspiration hit him. Scott stayed true to his word of wanting to bring the world of ancient Rome to the big screen.

‘Gladiator’ accurately represents the Roman people, culture, and values. “What was in the book was an understanding of how to connect who and how we were to who and how they were. There was a very clear understanding that the coliseums were a sports franchise,” said Franzoni. The movie also stays true to the historically documented uneasy dynamic between the royal politicians and common folk. A passion for power and opulence did rule the Roman politicians, but streaks of honor and conscience were prevalent as well.

Although the movie does contain several historical inaccuracies, especially pertaining to props and timelines, it manages to capture the zeitgeist of ancient Rome. Additionally, gladiators did exist in ancient Rome, and they did fight tigers and bears, albeit rarely. It was more common for men to fight men, often when chained together, as the movie showcases in its first half. The infamous ‘thumbs down’ gesture, however, has drawn skepticism from historians. It remains unclear whether the gesture signaled death to the defeated, as the movie implies.

Mannix’s book explores the circumstances of the Roman games, but the movie chooses to introduce and stick to a handful of characters. This allows the narrative to be immersive and favorable to tangible themes of justice and vengeance. The book makes use of artistic liberty, with the author sprinkling in his own interpretations where his research yielded no definite answers. The movie, too, uses fiction to fill in the gaps of history and fulfill the needs of an entertaining cinema. While the premise remained the same, the approach changed from print to picture.

Well, what about the characters? Venerable Marcus Aurelius, his corrupt son Commodus, and his cunning daughter Lucilla did exist. However, Commodus’ incestuous inclination towards Lucilla, as seen in the movie, has no basis in fact. While the cause of Marcus Aurelius’ death puzzles historians even today, it is confirmed that Commodus had no hand in it. Interestingly, the real Commodus was much crueler than Phoenix’s on-screen version. After Lucilla’s plot to assassinate Commodus failed in 182 AD, Commodus became even more tyrannical.

Historians claim that he gave poisoned figs to his guards and made some devotees of Isis use pinecones to beat themselves to death. In the movie, Lucilla is not explicitly crafty, although she supports Maximus. The character of Maximus is purely a creation of the movie, modeled after real-life Romans such as slave-turned-leader Spartacus, statesman-and-farmer Cincinnatus, and Avidius Cassius, who served Marcus Aurelius. The relationship between the main characters is also largely a product of storytelling, built upon various documented interactions between politicians of the Roman Empire.

While ‘Gladiator’ touches upon Rome as it was in the 2nd century AD and incorporates several real-life historical personas, its story is simply an artistic creation. This comes as no surprise — history remains inaccessible to us, and we often stitch together the world as it was back then using fact and fiction. Since the inception of cinema, many movies have prioritized creativity over historical accuracy. Movies like ‘Cleopatra,’ ‘300,’ ‘Pompeii,’ and ‘The King’ dip into history, finding new ways of representing the old; ‘Gladiator’ does the same.

Thus, the Ridley Scott directorial may revolve around historical characters and a mostly accurate setting, but the plot itself is rooted in fiction. The movie borrows fragments from the at-once cruel and magnificent Roman Empire, fusing the scattered faces and facts of the past with the larger-than-life glamour of historical epics. ‘Gladiator’ may not be a true story, but the human experiences it documents hold their weight in the annals of history.