Is Kevin Can F**k Himself a True Story? 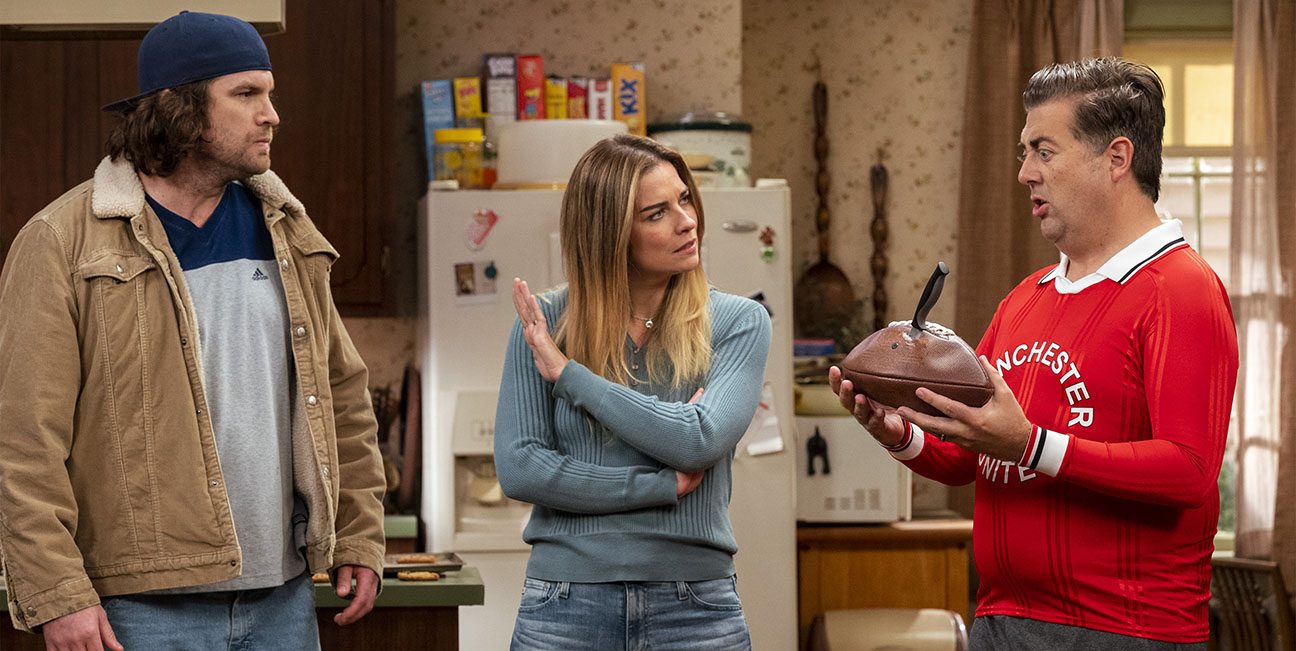 ‘Kevin Can F**k Himself’ is a unique show that aspires to change the dated representation of women, particularly wives seen in American family sitcoms. The dark comedy tries to redefine gender roles that have constantly rendered poorly written female characters. Created by Valerie Armstrong, the show follows a strong female lead in the form of ‘Schitt’s Creek‘-fame actress Annie Murphy’s character Allison McRoberts, a dissatisfied wife living in a man’s world which is represented as a laugh-track smoothed sitcom.

In contrast, Allison’s world is dark and full of despair. The two worlds clash as Allison tries to seize control of her own life. If you are wondering whether the intriguing premise is inspired by certain real events or true stories, you’ve come to the right place. We did a little investigation into the matter, and here’s everything we learned.

Is Kevin Can F**k Himself Based on a True Story?

No, ‘Kevin Can F**k Himself’ is not based on a true story. It is based on an original idea from creator Valerie Armstrong. The concept for the show first came to Armstrong in June 2017 after she did a podcast on the topic of TV pilot season. She felt that there weren’t any good female characters being written in sitcoms. According to Armstrong, the female characters lacked depth and only served the purpose of enhancing the appeal of their male counterparts and setting up punchlines.

“I was f***king angry and started questioning things in a way I hadn’t before,” Armstrong recollected in an interview with Creative Screenwriting. She went on to explain that she first devised the opening scene in her head. The scene as Armstrong described follows Allison as she moves away from the living room where her husband is engaging in a funny gag at her expense. As the scene shifts, the tone becomes much darker, and we get a sense of Allison’s reality. She then expresses her disdain towards her husband.

While the show puts a lot of focus on pointing out the problematic behavior of husbands and can sometimes get too real while doing so, Armstrong is cautious to note that it isn’t meant as an attack on husbands or men in general. “This is not a man-hating show. Kevin is a certain type of man, and you are allowed to criticize certain behaviors without taking issue with the entire gender,” Armstrong said in the same interview.

While the concept is completely original, Armstrong did draw from her real experiences to create the world of the show in a manner of speaking. In an interview with Variety, Armstrong said that the idea to base the show in Worcester, Massachusetts came from her desire to write about people she knows and grew up around. She said, “Worcester (was) where my brother’s college roommate was from, and he had this fascinating mix of absolute hometown pride while being ashamed of it and knowing all of its faults — and he had the most fantastic accent.”

The aforementioned elements can be clearly seen in Kevin’s personality. The genius of the show is how these elements bounce off of Allison, who has such a different worldview. This enables Armstrong to create a union between Allison and Kevin’s different perceptions. However, it also leaves room for conveniently subverting stereotypes of the sitcom genre. Armstrong has also cited shows such as ‘That ’70s Show,’ ‘Roseanne,’ and ‘Frasier’ as an inspiration. It is also hard to ignore the show’s allusions to ‘Everybody Loves Raymond,’ ‘Kevin Can Wait,’ and countless other shows with the dorky husband-hot wife trope.

Ultimately, it is clear that ‘Kevin Can F**k Himself’ is a fictional story that, without being overtly preachy, points out the problematic behavior of men and encourages them to change their way. Yet, at the same time, it is also a story of women empowerment and forging your own identity. The show is rooted in its creator’s rage and burning desire to change the representation of women in sitcoms (and television), and we can only marvel in admiration of Armstrong’s imagination that has birthed this unique story.