Is Kim’s Convenience a True Story?

A new wave of sitcoms with ethnically and culturally diverse characters has emerged in recent years. Shows such as ‘Superstore,’ ‘Gentefied,’ and ‘Fresh Off the Boat‘ have brought fresh stories with rich cultural overtones to the audience. One of the most popular shows among this new wave is the sitcom ‘Kim’s Convenience’ created by Ins Choi and Kevin White.

The series deals with the day-to-day life of the Kims, a Korean-Canadian family, who own and run a convenience store in Toronto. Amidst the entertaining family arguments, cultural clashes, and heartwarming moments, the show accurately portrays the life of immigrants in Toronto. Its globally resonant themes, such as family and communal harmony, will certainly make you wonder if the show is inspired by certain true stories or real events. We did a little research about the same, and here’s what we learned about the inspiration behind ‘Kim’s Convenience.’

Is Kim’s Convenience Based on a True Story?

No, ‘Kim’s Convenience’ is not based on a true story. The show is based on an original concept from co-creator Ins Choi, which he first molded into a successful play (of the same name) and eventually adapted into the show. However, while the story of the Kim family isn’t exactly based on Choi’s life, certain elements of the show are derived from the writer/producer’s own experiences. 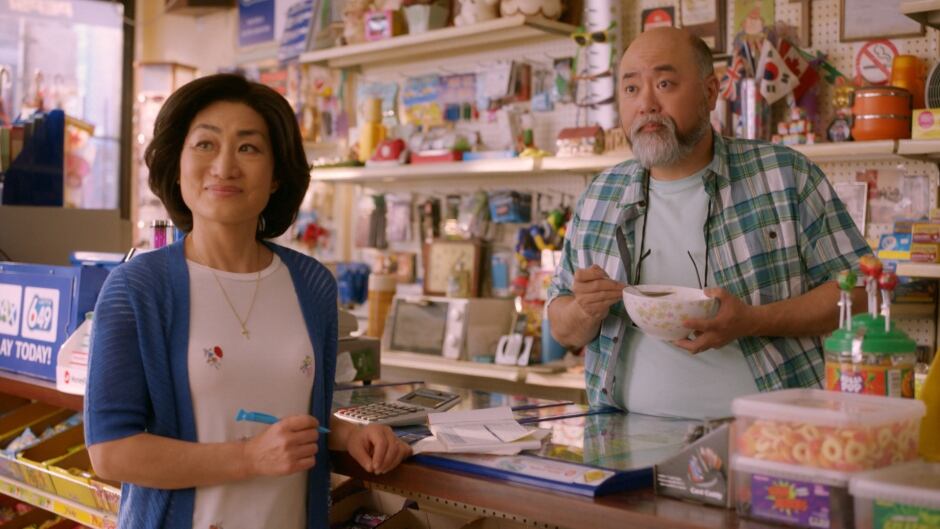 Choi was born in South Korea and migrated to Canada with his family when he was just one year old. He grew up in Scarborough, Ontario (presently a part of Toronto). Upon moving to Canada, Choi and his family stayed with his uncle, who owned a convenience store known as Kim’s Grocer at Black Creek Drive near Weston Road. Choi recounted that during the 80s and 90s, convenience stores run by Korean immigrants became a cornerstone of the local community, and the idea of the show developed from there.

In an interview with Toronto Life, Choi explained the connections between the show and his personal life. He said, “It’s not directly based on my experience, but I studied acting and the arts like Janet — the daughter in the show, who is a photographer — so there’s a parallel there. My dad is a great storyteller and funny, but he’s very soft-spoken and not nearly as opinionated or brash as Appa, Janet’s father on the show.” He also stated that the show is based on his observations of the various people that were around him while growing up. The strong family values on the show are derived from Choi’s personal belief that family is an institution, which was instilled in him by his father.

Kim’s Grocer isn’t the only real-life store that inspired the show’s eponymous store. Bob’s Convenience, a store located on Parliament and Dundas Street, which Choi often passed during his daily commute earlier in his life, also served as an inspiration. Likewise, Mimi Variety, a convenience store located at 252 Queen Street East, provided us the exterior shots of the store in the series. The signboard, interiors, and overall aesthetics of the store seen in the series are modeled after that of the real-life store. The local business has since retained the “Kim’s Convenience” signboard used during filming.

It is clear from the words of Choi that though some elements mirror his life and experiences in certain ways, ‘Kim’s Convenience’ is mostly a fictional story. It derives its strong sense of realism through the values of its co-creator. Choi’s worldview as a Korean immigrant living in Canada helps the show in crafting a broader and more resonant perspective on the show’s themes of family, patriarchy, communal spirit, cultural divide, and the socio-economic issues faced by people of different ethnic and cultural backgrounds living in Canada. The impact of small convince stores on the local communities is also a real-world element that drives home the story’s emotions and makes it more relatable.