Is Raymond & Ray Based on a True Story?

‘Raymond & Ray’ is a slice-of-life drama film about titular half-brothers reuniting to fulfill their estranged father’s last wish of digging his grave after he passes away. This sends them on an emotional journey, where they discover who they’ve become due to their relationship with their father. Helmed by Rodrigo García, the film stars noteworthy actors such as Ethan Hawke, Ewan McGregor, Sophie Okonedo, and Maribel Verdú, among others.

The Apple TV+ comedy-drama film explores serious themes such as familial relationships and generational trauma while peppering the narrative with humor in its bleakest moments. It depicts emotions such as anger, sorrow, and nostalgia with profoundness. The various characters are so relatable and authentic that you might wonder if the film is based on a true story. Well, look no further, as we’ve got an answer for you.

Is Raymond & Ray a True Story?

No, ‘Raymond & Ray’ is not a true story. Written and directed by Rodrigo García, the film is a work of fiction. In an interview with Screen Rant, he mentioned that the story came from a dark place in his mind and is not based on anything real. What’s more intriguing is that initially, the story only had one son digging his father’s grave, and the director didn’t know how to take the plot further. While speaking with Deadline Hollywood, he said, “I wrote a shorter version of it originally, about a half hour. It was only one guy, and he was already at the gravesite.” 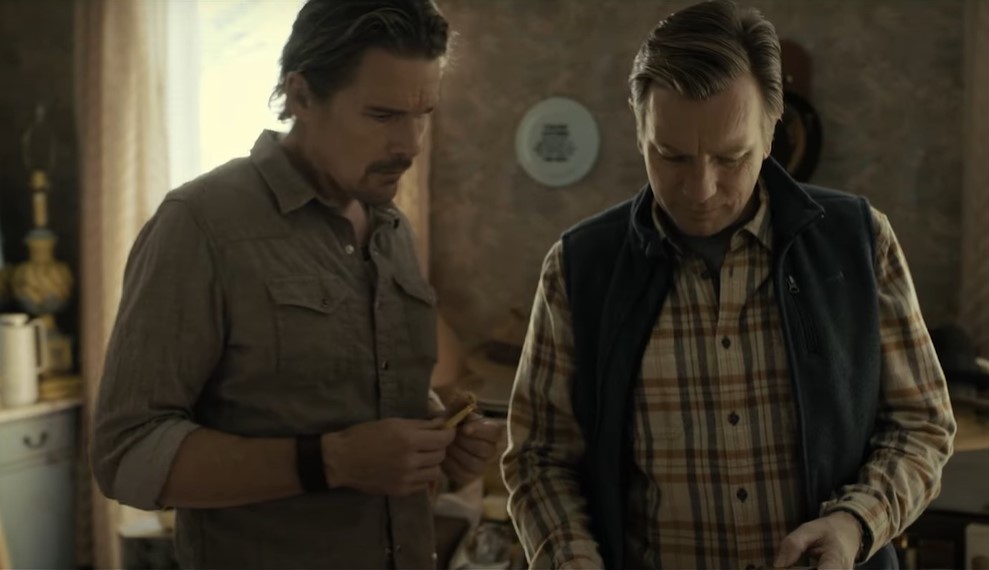 Years later, the idea of two half-brothers popped into Garcia’s mind, which helped him overcome the roadblock and make a full-length feature film. To set the tone for the story and showcase what kind of father the brothers had, he decided to give them the same name. In the movie, Ray and Raymond share a deeply complex relationship due to fractured bonds with their father.

The reunion of the brothers is filled with tension because it reminds them of their childhood trauma. While Raymond is devastated by the loss, Ray acts indifferently and comes off as resentful. It is also evident that their past has dictated their life decisions and the two struggle with individual problems. Ray has lost his wife and is recovering from addiction issues, while Raymond has had two divorces and is separated from his third wife.

As the movie unfolds, repressed memories come gushing out, dark secrets unravel, and the two brothers discover things they had never known. Ethan Hawke and Ewan McGregor are quite compelling as half-brothers and share great chemistry throughout the film. The scenes between them stir up diverse emotions within the viewers, and one can’t help but immerse themself in their performance.

It is fascinating that although the actors share screen space for the first time, they have been eager to work together for many years. Rodrigo García had previously worked with Ethan and Ewan separately. He revealed that he sent the script to Ewan at first, who responded to the character of Raymond. Following that, the two right away thought that Ethan Hawke must play Ray. Ethan was then sent the script, and it took him about 30 seconds to say “yes” because he loved the writing and knew Ewan would play his half-brother.

The way the lead actors portray two distinct facets of the relationship between a father and son is heartwarming and gut-wrenching at the same time. It reminds us of Ewan McGregor’s 2010 film ‘Beginners.’ It chronicles how Oliver’s view of his father changes after learning that he has terminal cancer and is gay. He slowly understands his father as the narrative progresses.

In ‘Beginners,’ we see Oliver come to terms with several facets of his relationship until he reaches a point where he can accept his father for who he is and even forgive him. In the same way, the Ewan McGregor and Ethan Hawke starrer dives into the imperfect nature of people, relationships, and life itself. In the end, ‘Raymond & Ray’ is driven by a fictional story but represents real emotions that we deeply resonate with.