Is the Dog in Hawkeye Real or CGI? Why Is He Called the Pizza Dog?

Marvel Studios continues to expand its slate of television shows with ‘Hawkeye,’ which revolves around former Avenger Clint Barton and amateur vigilante Kate Bishop. The pair of skilled archers is the show’s focal point, and Jeremey Renner and Hailee Steinfeld essay the roles with utmost sincerity.

However, a surprising character has stolen the limelight from the heroes and is proving to be quite the fan-favorite. The character is none other than Kate’s adorable canine companion dubbed the “Pizza Dog.” We are sure viewers must be curious to learn more about the dog’s portrayal on the show and the reasoning behind his unique name. Here’s everything you need to know about the Pizza Dog in ‘Hawkeye.’

Is the Dog in Hawkeye Real or CGI?

In the premiere episode of ‘Hawkeye,’ Kate Bishop crosses paths with a stray golden retriever while escaping from the Tracksuit Mafia as the Ronin. She saves the dog from an accident and takes it to her apartment. The dog is the show’s iteration of the fan-favorite comic book character, Lucky the Pizza Dog. If the dog’s movements and mannerisms seem realistic to you, that is because the series features a real dog and not a CGI creation. A female golden retriever named Jolt essays the role of the Pizza Dog in the series. She resembles her comic book counterpart, who is depicted with only one eye. The effect of the impaired eye is obtained with the use of CGI. 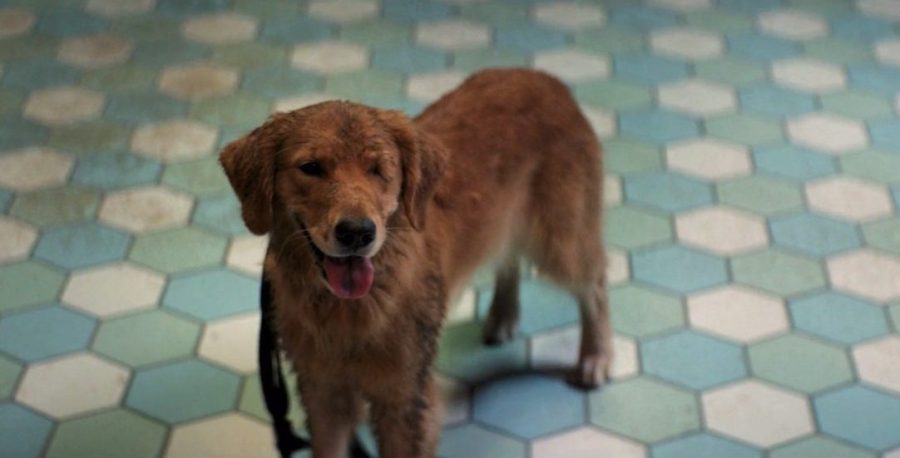 In an interview with THR, director Rhys Thomas expressed that he was initially skeptical of using a real dog in the series but was impressed with Jolt’s work ethic. “Jolt did an amazing job. There are very specific things the dog needs to do. She was great. I was definitely dubious, and I had images of a CG dog. Genuinely, I can’t think of a moment we lost time because of Jolt. She was on it,” he said. In the same interview, Thomas called the process of digitally removing Jolt’s eye “painstaking” due to the technical complications of the process.

Why Is He called the Pizza Dog?

Lucky the Pizza Dog first appears in Matt Fraction and David Aja’s critically acclaimed fourth volume of the ‘Hawkeye’ comic series. The canine is initially named Arrow and belongs to the leader of the Tracksuit Mafia, Ivan Banionis. Arrow saves Clint during a fight, and the archer renames the dog Lucky. However, in the television series, the dog is simply referred to as the Pizza Dog.

Kate bestows the title of Pizza Dog on the golden retriever. The title comes from the canine’s affinity for pizzas, similar to his comic book counterpart. After their first interaction, Kate feeds the dog a slice of leftover pizza. We see the dog eating only pizzas and living up to the title during his limited screen time in the first two episodes. For now, he might be referred to as the Pizza Dog but could be christened as Lucky in future episodes. Of course, Lucky the Pizza Dog isn’t the first canine companion from Marvel Comics to make a live-action appearance in the ‘MCU’ as that honor goes to Cosmo the Space Dog.

Read More: Is Hawkeye’s Rogers: The Musical a Real Musical? Where Can I Watch It?