Is the Dog in Turner & Hooch Real or CGI?

‘Turner & Hooch’ is a reboot/ continuation of the 1989 hit film of the same name starring Tom Hanks. It follows Scott Turner Jr. (the son of Hanks’ character), a US Marshal, who inherits a dog after his father passes away under mysterious circumstances. The titular dog is one-half of the buddy-cop show’s lead pair and is also the connecting tissue between the new and older iteration of the concept. One question that viewers will certainly have about Hooch is whether the adorable and slobbering canine seen in the series is real or created using CGI. If you are curious to find out the same, we’ve got you covered! Allow us to introduce you to Hooch from ‘Turner & Hooch.’

Is the Dog in Turner & Hooch Real or CGI?

In the original film, Hooch is a dog of the French Mastiff breed (also known as Dogue de Bordeaux). In the climax of the movie, Hooch takes a bullet and dies after losing a lot of blood. However, in the closing moments, Scott is seen caring for Emily’s female dog, Camille’s litter. One of the pups looks exactly like Hooch. However, the Hooch in the series is unrelated to the original and was rescued by Scott’s father sometime before the events of the show.

In both the original film and the series, Hooch is a real dog and not a creation of CGI. In the film, Beasley the Dog portrays Hooch, with Igor, another French Mastiff, acting as the dog’s stunt double. Beasley sadly passed away in 1992 at the age of 14.

In the new series, a total of five dogs play the character of Hooch. Arnie, Hammer, Obi, Cyd, and Mya are the names of the five dog actors, each with their distinct traits that help in bringing Hooch to life on screen. Actor Josh Peck who plays the role of Hooch’s partner/ owner Scott Turner Jr. revealed in an interview that each dog has their own qualities, and during filming, they were called upon as per the need of the scene.

For example, Mya is the one who can jump the highest. “When we needed a dog to jump high, she was the one we called in. It was like having a team — you called in your specialist,” Peck told NY Post. Peck also revealed in an interview that he was neither familiar with the French Mastiff breed nor was he a “dog person.” However, as filming went on, Peck began to love the company of the dogs. 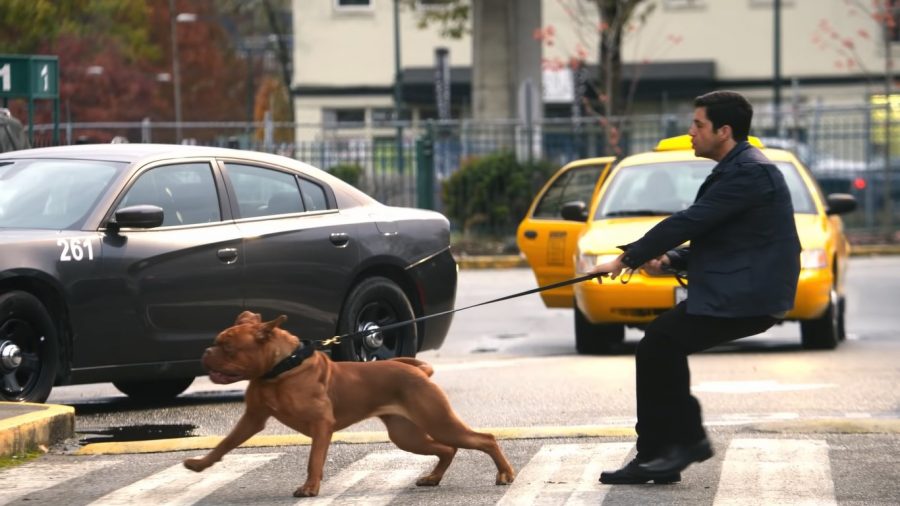 “It’s so fun having dogs on set. It kind of alleviates any stress or tension. They’re just so fun and kind of silly. Even though they’re really well-trained dogs, they’re still animals, so they’re not really a part of the whole set environment in the sense of the normal. So it was really nice,” actress Cristina Rosato told ComicBook about her experience of working with the dogs. Therefore, it is safe to say that the dogs who play Hooch are as adorable in real life as they are on screen.

“As an actor, it requires you to be so present and throw out any plans that you might have had for the scene because the dogs don’t know your plans,” actress Vanessa Lengies said, speaking to Variety. Lengies’ words hint that the sort of authentic reaction that has been obtained by having real dogs play the part would have been difficult to generate through CGI.