Is The First Lady Filmed at the White House? How Accurate Are the Interiors? 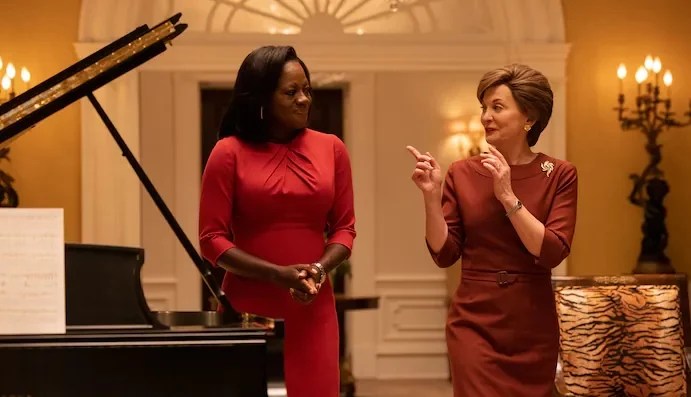 Showtime’s ‘The First Lady’ follows three iconic first ladies of the White House and how their presence had far-reaching effects. Aimed at depicting the personal struggles and triumphs of the central characters, the anthology series has a narrative that is simultaneously intimate and expansive. As the stories of Michelle Obama (Viola Davis), Betty Ford (Michelle Pfeiffer), and Eleanor Roosevelt (Gillian Anderson) unfold, a common thread between the three former first ladies becomes their residence — the White House. Fittingly, the iconic home of the President of the United States is depicted in detail on ‘The First Lady.’ Let’s take a look at how much the show gets right about the White House.

Is The First Lady Filmed at the White House?

In case the detailed sequences through the presidential home depicted in the series had you wondering, ‘The First Lady’ is not actually filmed at the White House. In fact, the show barely seems to have been shot in Washington D.C., with most of the principal photography carried out in Georgia. The on-screen authenticity of the White House is a result of detailed sets for indoor shots that depict the myriad rooms of the iconic residence.

What’s especially impressive is the memorable scene of Michelle Obama staring out of an East Wing window, watching a newly elected Barack Obama enter the West Wing during their first visit to the White House. Scenes depicting outdoor elements of the White House are shot at Tyler Perry Studios in Atlanta using a small-scale reproduction in the studio backlot. The detailed structure that was built for filming was shootable from all four sides, making convincing shots of the White House exterior possible.

Meanwhile, sets at Cinelease Studios’ Three Ring Studio in Covington, Georgia, were treated to detailed set design to recreate the Presidential home’s interiors across three distinct time periods. The sets were furnished using materials and furniture that were sourced from antique stores, flea markets, and estate sales all over Georgia and neighboring states. A wide variety of fabrics were also painstakingly procured in order to finish the look.

How Accurate are the Interiors of the White House?

With all the effort gone into recreating the White House, just how close is it to the real thing? The production design team built a convincing stand-in for the Presidential home across a century (from 1905 to 2017), which is a remarkable feat in itself. However, what makes it more impressive is the accuracy. Tony Fanning, who is one of the production designers, has recreated the White House on multiple occasions for projects like ‘The West Wing’ and ‘Lincoln.’

Researchers from the team consulted the White House Historical Association, the National Archives, and all the presidential libraries. Books on the subject detail the actual measurements and materials used in the White House. Thus, the end result is not an estimation but an accurate recreation of the White House based on copious records kept over many years. Incidentally, a set decorator also spoke to Michael Smith, who was the Obamas’ White House decorator.

Thus, the White House, as seen in ‘The First Lady,’ has been painstakingly recreated and is remarkably accurate. Of course, tight production schedules mean a line has to be drawn at some point in just how minutely aspects are recreated, and things like the china used in some of the older (Ford-era) state dinner scenes are apparently not absolute replicas of the originals used at the time. However, that further points to just how accurate the rest of the recreation of the White House on ‘The First Lady’ is.