Is The Legend of Zorro Based on a True Story? 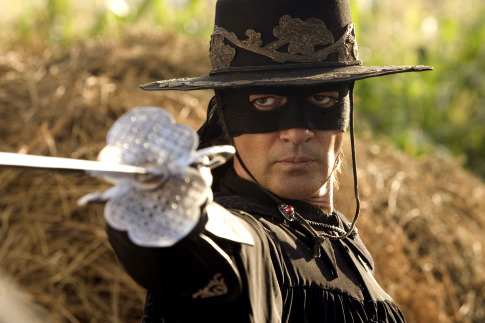 Directed by Martin Campbell ‘The Legend of Zorro’ is a sequel to the 1998 film ‘The Mask of Zorro.’ The 2005 action-adventure western film follows the titular masked vigilante AKA Don Alejandro de la Vega as he embarks on a journey to save the fate of California and its people. With the assistance of his gorgeous wife Elena (Catherine Zeta-Jones) and their bright son Joaquin (Adrian Alonso), Zorro battles injustice against an evil organization. Don struggles to balance his dual life as Zorro and a family man. Tired of him repeatedly defying his pledge to quit donning the mask, Elena breaks up with him.

Zorro later finds out that the man Elena is dating is a part of an evil organization, and he goes on to avenge the ordinary people for the man’s wrongdoings and also save the state. When you think of ‘Zorro,’ your mind immediately conjures up an image of a dashing brave hero with his swishing sword and tornado ride. Being one of the inspirations behind the ‘Dark Knight,‘ the original caped swashbuckler has won our hearts with his robust Robin Hood valor, making one wonder if there is any reality behind the ‘The Legend of Zorro.’ Let us unmask the truth!

Is The Legend of Zorro a True Story?

‘The Legend of Zorro’ is not based on a true story, but the character of Zorro (Spanish for Fox) is reportedly inspired by a real-life individual, Mexican-American Joaquin Murrieta Carrillo, and the narrative fictionalizes a few historical events that have roots in reality. The sword-wielding vigilante was created in 1919 by Johnston McCulley for his 5-part novel, ‘The Curse of Capistrano,’ and adapted to the screen for the sequel film by Roberto Orci and Alex Kurtzman. Murrieta was regarded as a legendary folk hero in Mexico, first reported during the California Gold Rush in the Spanish-occupied California regions in the 19th Century.

The film developed Don Alejandro de la Vega as the fictional brother of the real-life Joaquin Murrieta. Per the sources, Murrieta had traveled to California with his wife and brother during the Gold Rush. After running into a series of unfortunate events that led to the death of his wife and his brother by white miners, he went out to avenge their deaths. One by one, he successfully killed the people who killed his family. He went on to avenge the deaths of other innocent Mexicans and returned the gold that these white miners had taken away.

Joaquin went on to become one of the most celebrated legends in Mexican folktale. Except for the valorous black cape and the stunning image of the “fox,” there are certain noticeable similarities between Murrieta and Zorro. Both were driven by their unquenched thirst for justice and a desire to fight against corruption. However, unlike Zorro, the bandit reportedly preyed on the innocents after he avenged his family’s death.

Zorro is known to be a sworn protector of the people and the enemy of the Spanish colonial authorities. On the other hand, Joaquin was known to be active during the early days of 19th-century California. Hence, though there is a direct link between the actor’s name and the name of the person based on whom the film was likely inspired, there’s still a question mark regarding the truth behind it all. It is believed that a plausible inspiration for Zorro, apart from Joaquin Murrieta, was Salomon Pico.

Pico had fought in the American-Mexican war and was present during the Gold Rush (1849). Though there’s no confirmation, It has been reported that he, too, lost his wife at the hands of his enemies during the war against whom Pico swore revenge. Pico was seen as a messiah to the Hispanic community for his deeds for the people. Many other sources hold Reynard the Fox, Robin Hood, Tiburcio Vasquez, William Lamport, and Manuel Rodriguez Erdoiza to be the inspiration behind the fictional character that has appeared in several films and other cultural spin-offs.

Thus, the beloved fox, though fictional in character, was not a complete product of McCulley’s imagination but an inspiring figure that became one of the founding inspirations of Batman. It is safe to say that while conceiving the character of the masked vigilante, McCulley was greatly inspired by the tales of Joaquin Murrieta and partly inspired by the other vigilante figures from a turbulent period in the history of California. To reiterate, ‘The Legend of Zorro’ is driven by a fictional narrative revolving around a character and setting that’s a blend of historical fact and fiction presented in an entertaining manner.