Is The Tragedy of Macbeth Based on a True Story? 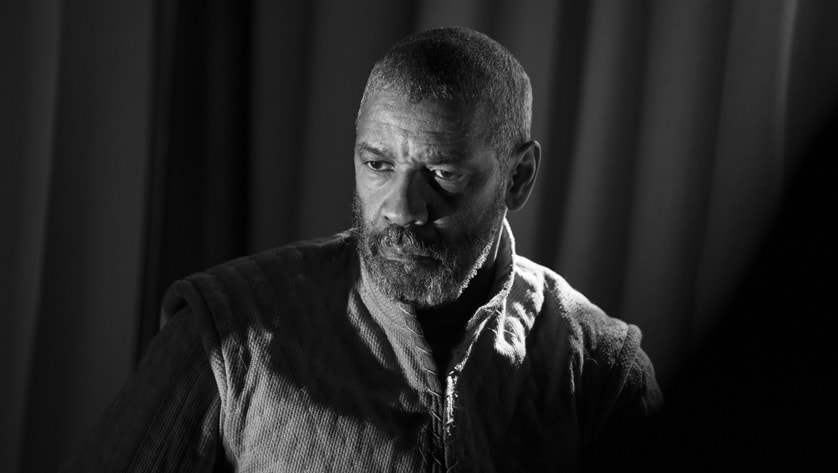 Joel Coen’s ‘The Tragedy of Macbeth’ is a gripping tale of an army general who encounters a prophecy claiming that he will become the King of Scotland. Starring film industry heavyweights such as Denzel Washington and Frances McDormand, the film dabbles with German Expressionism in order to bring out the harrowing psychological struggles faced by general Macbeth and Lady Macbeth as they plot to seize power from the king.

The black-and-white film is serious, slow, and precise, immediately forcing us to engage with the realities and consequences of our ambitions. Since political betrayals and assassinations for the sake of power have always been a part of human history, many wonder whether the Coen directorial is based on truth. Well, we’ve got you covered. Let’s find out!

Is The Tragedy of Macbeth a True Story?

‘The Tragedy of Macbeth’ is partially based on a true story. However, it is true that it mixes generous amounts of fiction with ancient historical facts. To understand what these are, it’s necessary to go back to the source material of the film, which is William Shakespeare’s tragedy ‘Macbeth.’ Presumed to be written sometime in 1606–1607, this play by the world’s most famous and influential playwright deals with themes of guilt, power, and ambition. 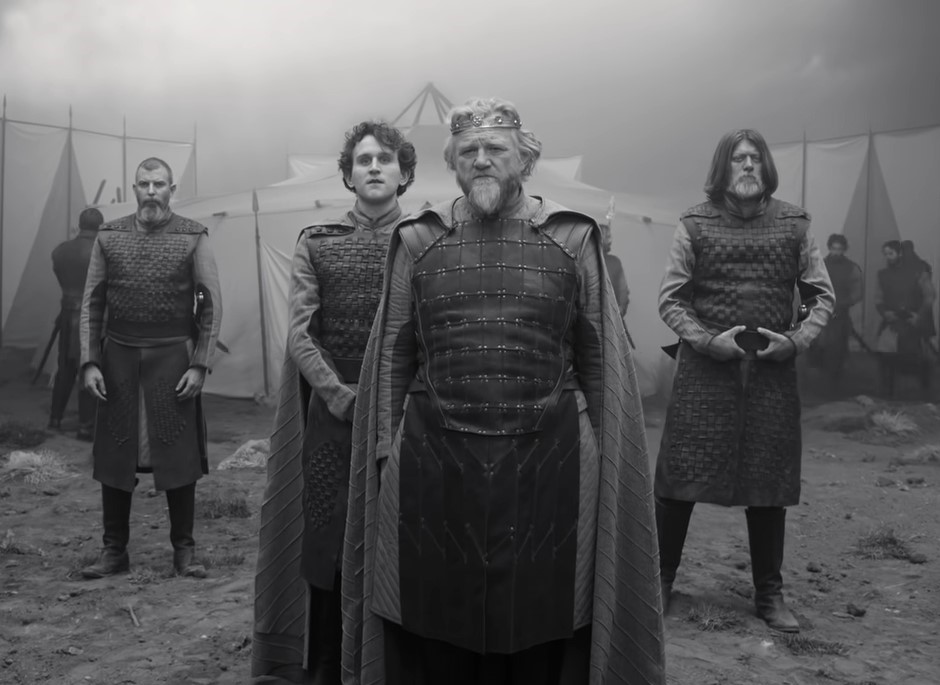 Shakespeare is well-known for using historical characters to create phenomenal stories featuring universal themes pertaining to human emotions and experiences; Macbeth is one such character. However, Shakespeare’s Macbeth doesn’t share a lot of similarities with the actual 11th Century Scottish king, Mac Bethad mac Findláich (whose anglicized name is Macbeth), that he is based on. The real Macbeth ruled steadily for 17 years, was considered to be brave and wise, and encouraged the spread of Christianity. Additionally, Lady Macbeth is a fictional character — her real-life counterpart was named Gruoch (also spelled as Grauch).

The annals of history tell us that in 1040, Macbeth defeated King Duncan I (Donnchad mac Crinain) in battle and claimed the throne. Scholars are aware that the English playwright used Raphael Holinshed’s ‘Chronicles of England, Scotland, and Ireland,’ a well-known source of history during the 16th Century, to craft his character of Macbeth. Of course, he added his own literary genius to the historical story, probing deep into the minds of humans — who for centuries have struggled with a lust for power — and extracting the dark desires that drive them.

Interestingly, Shakespeare tweaked Banquo’s backstory so as to not offend King James I, since the Thane of Lochaber was the king’s ancestor. According to Holinshed’s documentation, Banquo supported Macbeth in his plot to overthrow King Duncan. However, in the play,  Banquo becomes Macbeth’s enemy; after he is murdered, his ghost haunts the power-hungry Macbeth and acts as a physical manifestation of his guilt. 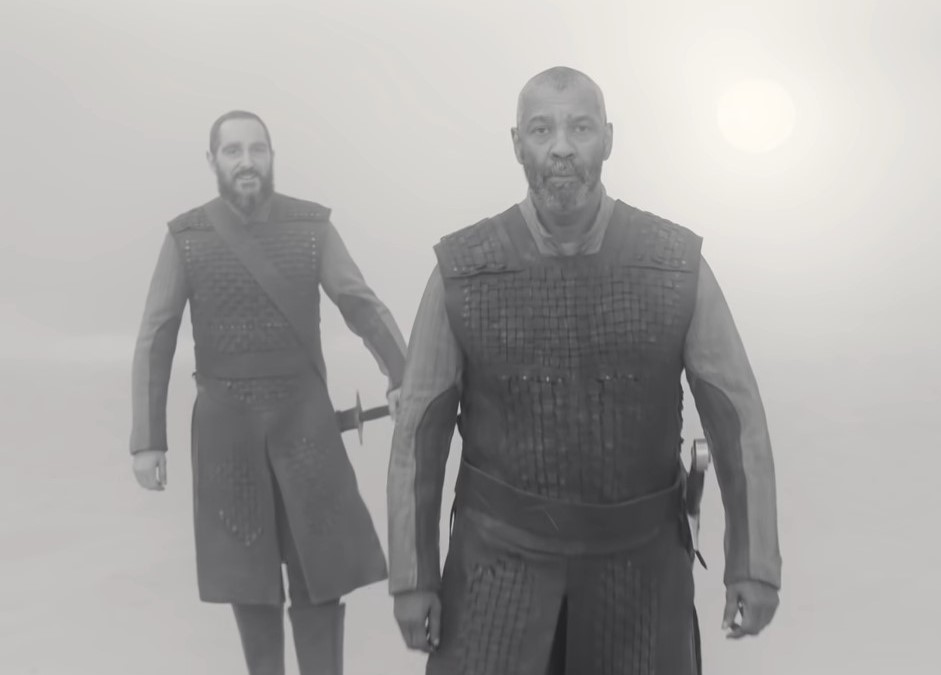 Shakespeare’s play features elements of fantasy as well — we encounter the three prophesizing Weird Sisters who tell Macbeth that he will first become the Thane of Cawdor and then ultimately become the King of Scotland. The seed of ambition is thus sown in the mind of Macbeth, who is a general in King Duncan’s army. Later, his wife, Lady Macbeth, too becomes deeply obsessive about claiming power and urges her husband to commit the ultimate crime for the throne.

‘The Tragedy of Macbeth’ is quite faithful to Shakespeare’s play and focuses wholly on its characters, whose deliberations, desires, and decisions form the crux of the story. Filmed entirely on a sound stage, the film captures the tension that outlines Macbeth’s thought processes and decisions; we almost feel as though we are watching a play on stage, which is exactly how Shakespeare’s works are supposed to be experienced.

With its extreme close-up shots and occasional point-of-view shots, the Coen directorial effectively represents the ominous power dynamics between the characters and attempts to communicate the true nature of Shakespeare’s legendary play — tragedy. We watch, transfixed, as the general submits to his deepest passions, believing wholly in the prophecy after he becomes the Thane of Cawdor, and slays the King of Scotland.

Soon, the consequences of blind ambition come to haunt Macbeth as well as Lady Macbeth. History tells us that Siward, Earl of Northumbria — who wished to restore his nephew and Duncan’s son, Malcolm Canmore, to the throne — challenged King Macbeth in 1054. During the Battle of Lumphanan in Aberdeenshire in 1057, King Macbeth was killed by Malcolm Canmore, who thus took back his father’s throne. 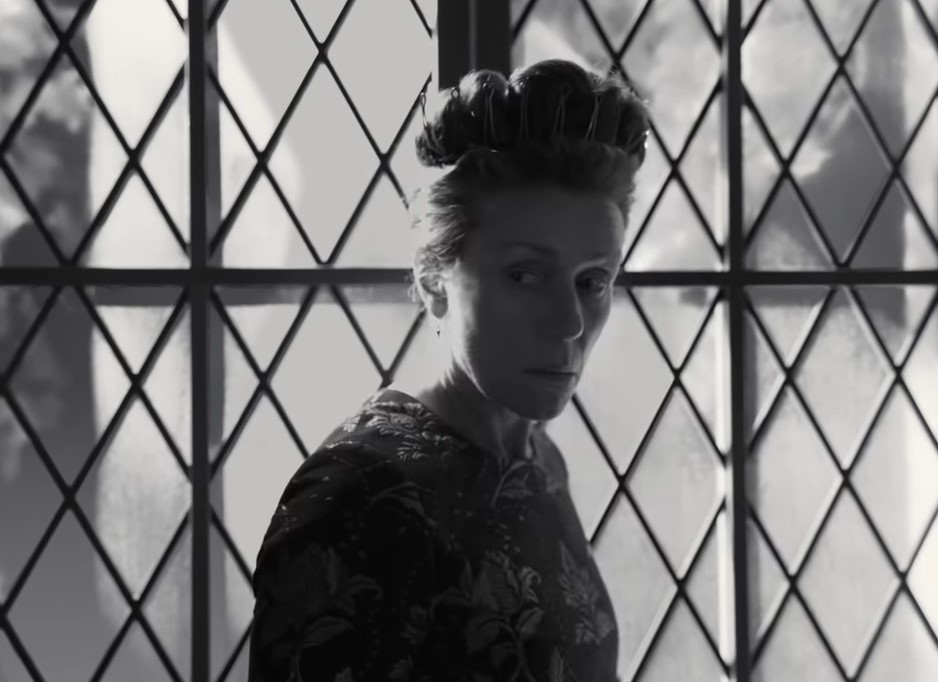 In Shakespeare’s play and its Washington starring film adaptation, we see how guilt and fear consume Macbeth and force him to commit increasingly heinous actions for the sake of his throne. The use of classical language, close to the kind seen in Shakespeare’s original and unabridged plays, ensures that the historical, regal, and tragic aspects of the film are amplified. One notable difference between the film and the play is that Coen’s Macbeths are older than what Shakespeare imagined them to be — this, however, ensures that their quest for power becomes even more cold-blooded and calculated.

Thus, the impact of Macbeth’s eventual downfall — brought about by Macduff, the Thane of Fife, who restores Duncan’s son on the throne — is hard-hitting as one comes to terms with the cyclical nature of life, power, revenge, and death. “The ambition was to do it [‘The Tragedy of Macbeth’] very much as a movie in terms of embracing what the medium gives you stylistically and psychologically and formally, but trying not to lose the essence of the play-ness of the piece of literature,” Coen stated.

‘The Tragedy of Macbeth’ is thus partially based on truth and reimagines historical characters for the sake of the story; however, it accurately captures the tendency of humankind to blindly pursue power and abandon all morals in the process. Additionally, it reminds us of how Shakespeare will always be relevant, simply because he could tap into the ugly truths that lurk in the minds of humans from all levels of society.

Read More: The Tragedy of Macbeth Review: An Ambitious Shakespearean Adaptation That Abandons its Audiences