Is Welcome to Flatch Based on a True Story?

‘Welcome to Flatch’ is a mockumentary that pokes fun at the life of small-town Americans. Created by Jenny Bicks, the comedy show is set in the fictional town of Flatch, Ohio. The documentary crew behind the camera sets up shop in this town to follow the life and dreams of its residents. The show majorly follows Lloyd “Shrub” Mallet (Sam Straley) and Kelly Mallet (Holmes), cousins and best friends. Along with them, viewers get to the shenanigans of Father Joe (Seann William Scott), Cheryl (Aya Cash), Nadine (Taylor Ortega), Len (William Tokarsky), Mickey (Justin Linville), and many more!

This Fox comedy is full of chaotic events that the eccentric residents of Flatch are up to. The lack of large-scale events and abundance of drama in this town is sure to keep the audience hooked and reaching for more. Despite its parodical nature, the show does present an account of the life of an average small-town American that is accurate, albeit slightly exaggerated. The realistic setting of the show does make one wonder if the show is based on actual events. Let’s explore whether ‘Welcome to Flatch’ is indeed a reality or not!

Is Welcome to Flatch Based on a True Story?

No, ‘Welcome to Flatch’ is not based on a true story. Instead, the show draws its inspiration from ‘This Country’, a British mockumentary sitcom, that first aired on February 8, 2017. The award-winning show inspired Jenny Bicks and producer Paul Feig to recreate the BBC series in a midwestern American setting. The American show even shared its name with its British counterpart until May 17, 2021, when the title was changed to ‘Welcome to Flatch.’ 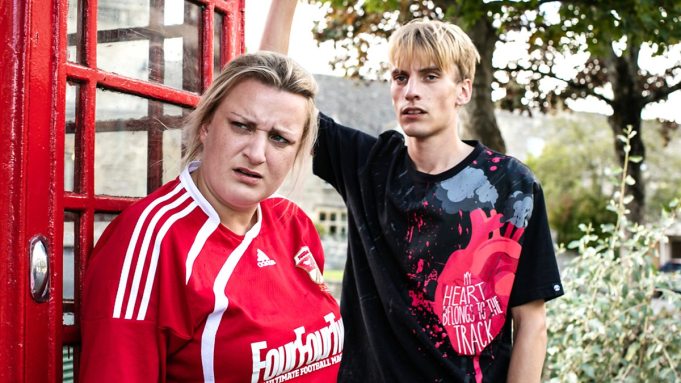 Created by siblings Daisy May Cooper and Charlie Cooper, ‘This Country’ gives the audience an insight into the everyday life of cousins Kerry Mucklowe and Lee “Kurtan” Mucklowe. The two live in a small village in the Cotswolds — an area in south-central England, besides a range of hills along the Upper Thames. Both Kerry and Kurtan chase after their respective ambitions and will stop at nothing to fulfill them. The village is full of seemingly bizarre characters, a version of which can be found in every small locality.

Daisy and Charlie were inspired to write about this based on their own experience of growing up in Cirencester, England, where they still live. The show was meant to be based in Cirencester but the channel decided to isolate the characters even further and went with Northleach, England, an even smaller village. Daisy stated, “All the material is based around stuff that happens in Cirencester.”

Charlie Cooper emphasized the importance of small things in rural settings that might seem trivial to outsiders. “I think living in a small town, it’s all about the smallness of everything and how because we’ve grown up here it can get quite boring because there’s nothing to do, so you’re getting involved in tiny things just to keep you occupied,” said Charlie Cooper. “A lot of the storylines you see, all of them have happened to us. Stuff that we’ve seen or stuff that’s happened to our friends. We didn’t have to make anything up because it’s all here.”

Speaking of small towns as a setting for TV shows, ‘Welcome to Flatch’s Jenny Bicks said, “Small towns represent what we all should be aiming for.” Feig chimed in by saying, “There’s a real honesty to the comedy in the Midwest. We’re much less tolerant of things that feel fake to us.” So it is evident that the setting is as big a character in the script as the people.

Furthermore, apart from the showrunner and producer, many on the cast — including Holmes — come from the Midwest, lending an air of authenticity to the show. Also, improvisation on the set really ensured that the comedy did not feel scripted at all times. While Holmes cited contemporary shows like ‘The Office’ as a massive source of inspiration for her, Bicks also commented that the use of this mockumentary format (and improv) led to the comedy flowing more smoothly while filming as well.

Moreover, though Feig had referred to the show previously as akin to “comfort food,” he said it best when he stated, “If we’re not representing the world on screen the way that it actually is in real life, then we’ve completely failed. Even in all our scouting, the smallest town we’d go through, there was diversity there. We just wanted this to be very inclusive in a very honest way.”

‘This Country’ went on for three seasons and lead to its adaptation in an American format. The Cooper siblings seem to be on board with this adaptation. They are even listed as executive producers of the Fox show. So, it is clear that despite its fictional roots, ‘Welcome to Flatch’ is indeed true to its source project and the lifestyle it aims to represent.

Read More: Where is Welcome to Flatch Filmed?