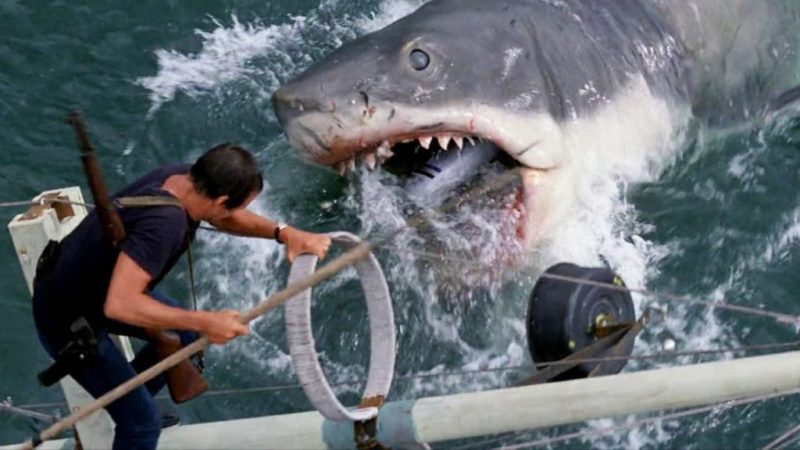 The mystery of the unknown underwater has become a source of extreme fear, thanks in part to Hollywood productions that have presented compellingly bone-chilling horror stories revolving around this. It wouldn’t be wrong to say that this horror trend was started by Steven Spielberg‘s 1975 movie ‘Jaws.’ The film became incredibly successful and is considered to be the first “summer blockbuster.” Moreover, it led to the inception of the Hollywood blockbuster model focusing on simple, high-concept premises filled with action and adventure, and heavily marketed.

‘Jaws’ is based on the 1974 novel of the same name by Peter Benchley. It revolves around a great white stark that begins to terrorize an idyllic island called Amity. To counter the threat, a marine biologist, a fisherman and a police chief ought to spring into action.

‘Jaws’ was the first major movie to be filmed on the ocean, resulting in several troubles caused during production. Yet, the film managed to gross $470.7 million, making it the highest-grossing film till ‘Star Wars‘ was released. It was selected for preservation in the United States National Film Registry in 2001.

Several viewers might have wondered where ‘Jaws’ has been filmed. The 1975 movie is mostly set on a quiet, island community and resort town known as Amity Island. The idea was to show how the terror of a monster like the great white shark could destroy a relatively small business. Hence, it is natural for viewers to wonder where the movie was shot. What seaside destination was used to portray Amity Island?

This true classic brought me to Martha‘s Vineyard some years ago. The island south of Cape Cod served as the real set of Amity Island. 🎬 #jaws45 pic.twitter.com/5rmF0rHYYS

Next, the house used to depict Cheif Brody’s house is located on 265 East Chop Drive in Vineyard Haven. Scenes set in Amity Polic Department, on the other hand, were filmed on South Water Street & Davis Lane in Edgartown. South Water Street is also where the reel locations, Keisel’s Bicycle Garage, Amity Hardware, and Amity Garage were filmed.

Hard to believe, but forty-four years ago this was the location of Chief Brody’s house in Jaws. pic.twitter.com/wx3sCzqbvI

Additionally, the place used to film Amity Town Hall is located on 70 Main Street. The place where Mayor, Hooper, and Brody argue about keeping the beaches open is actually located on 35 Aquinnah Circle in Aquinnah, Massachusetts.

The attack on Alex Kitner was filmed on Joseph Sylvia State Beach. Filming was also undertaken on the American Legion Memorial Bridge which is also known as Jaws bridge because of the movie. Scenes set in Quint’s Shop were filmed on Menemsha Inn Road. Moving on, scenes set on the sea were filmed over 155 days between Oak Bluffs and East Chop.