‘Letters to Juliet’ is a 2010 romantic comedy set amidst the rolling Italian countryside and follows the adventures of a fact-checker from New York who finds herself embroiled in a decades-old love affair and an even older tradition of love. When Sophie (Amanda Seyfried) comes across an old letter hidden inside a wall, she decides to help the woman who wrote it reunite with her long-lost love.

A romantic tale that blossoms into not one but two love stories, the film is a quintessential rom-com fueled by a whimsical search for love in arguably one of the most romantic places in the world. But how does that fit in with Sophie and her fiancé’s busy vacation that feels anything but romantic? And who are the happy couples in the end? Let’s look at the ending of ‘Letters to Juliet’ and see where the characters find their love. SPOILERS AHEAD.

The film opens with Sophie and her fiancé Victor, who both lead busy lives in New York, heading to Verona, Italy, for a pre-wedding vacation. While Victor remains busy meeting suppliers for the new Italian restaurant he plans to open in New York, Sophie visits the famous Juliet’s House (Casa di Giulietta), where lovers from all over the world come and leave notes professing their love.

To her surprise, she notices a woman collecting the letters once all the visitors have left, and upon following her, is introduced to the secretaries of Juliet. The group of women, Sophie is startled to learn, reply to all the letters from lovers in every situation. At her next visit to Juliet’s House, she discovers an old letter behind a loose brick from a woman named Claire, who describes how she left her lover Lorenzo and now regrets it. 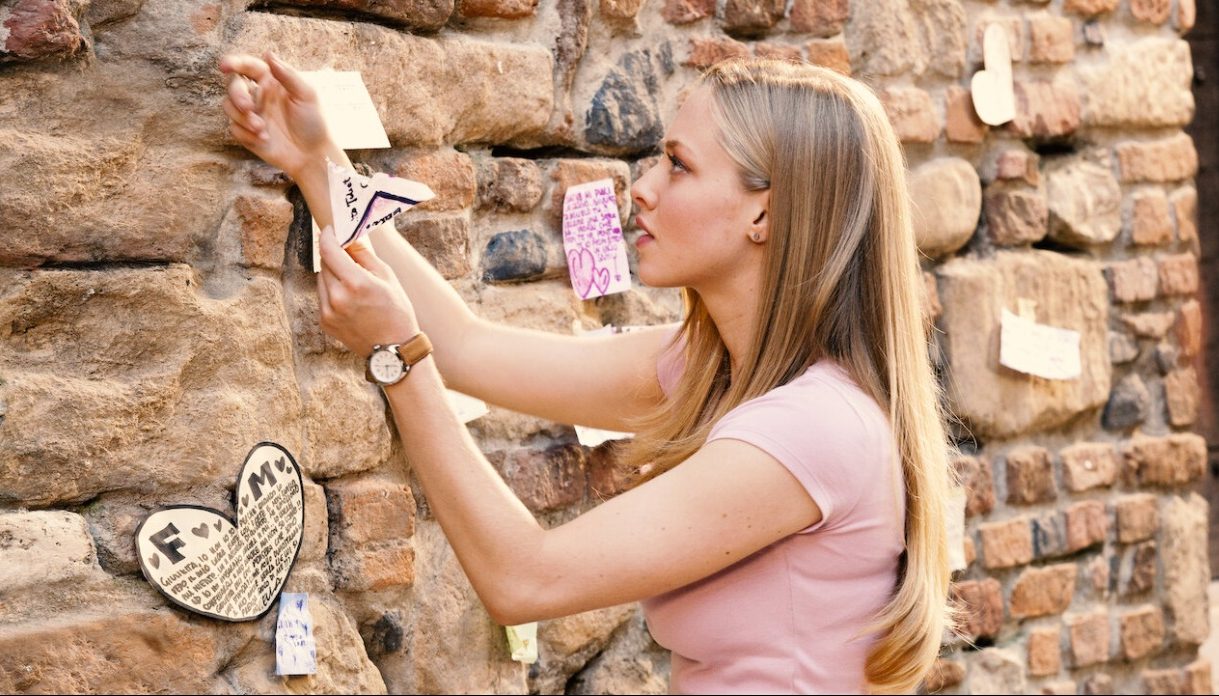 The secretaries of Juliet suggest that she reply to the letter, and soon, to Sophie’s surprise, Claire arrives in Verona along with her grandson Charlie, who remains skeptical of the whole affair. Sophie finds herself intrigued more and more by Claire’s story and asks if she can accompany them on their search for Lorenzo. Despite Charlie’s protests, Claire agrees, and the 3 set off to the house where Lorenzo used to live 50 years ago when Claire last saw him.

However, the man they find there has eyes that are different from the ones that Claire remembers her long-lost love having, and soon enough, the man admits to having married the woman he fell in love with, proving that he is not Claire’s Lorenzo. Soon enough, with Sophie’s help, they compile a list of over 70 men with the name “Lorenzo Bartolini,” who could potentially be the one Claire fell in love with all those years ago.

As the search continues, Charlie gets increasingly uneasy about raising his grandmother’s hopes and finally quarrels with Sophie, who wholeheartedly believes that Claire must continue her search. Soon after, however, Charlie learns of Sophie’s painful past with how her mother left her when she was a child, and apologizes. The two eventually kiss, but Charlie later apologizes to Sophie for kissing her since she has a fiancé, and soon enough, it is time for Sophie to leave Italy and go back to New York.

Letters to Juliet Ending: Do Sophie and Charlie Get Together?

Claire wants to have a farewell toast with Sophie, and the three of them stop at a vineyard, where Claire notices a young man who looks like her Lorenzo. Realizing the man might be the grandson of the Lorenzo Claire fell in love with, Charlie asks the young man about his grandfather’s whereabouts. Soon, the older Lorenzo, the man Claire fell in love with many years ago, appears, and the two lovers are reunited at long last.

Back in New York, Sophie realizes that her fiancé Victor is more interested in his restaurant than he is in their relationship and breaks off the wedding. Then, realizing she is in love with Charlie, she flies back to Italy to attend Claire’s wedding with Lorenzo and is crushed to see Charlie with another woman. Soon after the wedding speeches, she walks away but is followed by Charlie, who reveals that the woman she saw him with was his cousin. Charlie professes his love for Sophie, and in an attempt to climb up to the balcony she is standing on, falls to the ground.

The film closes with Sophie rushing down and kissing Charlie as he lies on the ground, just as a newly married Claire and Lorenzo come walking up to them. So, in the end, in true rom-com fashion, we find not one but two happy couples coming together. In the process of helping Claire find her long-lost love, Charlie and Sophie fall in love and, despite the odds, end up together.

Though the two seem very opposite in the beginning, Sophie slowly warms up to Charlie when Claire tells her how, behind his skeptical exterior, he is a kind-hearted man. Sophie is also impressed when she realizes that Charlie does pro-bono legal work for those that cannot afford legal representation. On the other hand, despite having a difficult childhood, Charlie realizes that Sophie has kept her optimism and is impressed by how, mainly because of Sophie’s faith, his grandmother Claire is reunited with Lorenzo after being apart for 50 years.

What did the Letter Say?

The letter that Sophie originally finds in the wall at Juliet’s House is 50 years old and was written by a 15-year-old Claire just before she left to go back to London. She had been living in Tuscany, near Siena, studying art, when she and Lorenzo had met and fallen in love. As the letter explains, Claire and Lorenzo had agreed to meet under “their tree,” which is where Claire takes Sophie and Charlie many years later when they begin their search for Lorenzo.

However, when the time came for the 15-year-old Claire to meet Lorenzo under the tree, she got cold feet and didn’t go. She knew that her parents would have never accepted the Italian boy, so instead of going to him, she left for London instead. She then wrote the letter that Sophie finds, in which she conveyed her sorrow for leaving Lorenzo under the tree without an explanation and how she loved him but went back to London anyway to continue her studies.

The discovery of this letter essentially sets off Sophie’s adventure, which ends with her and Charlie together. After seeing Claire’s letter, Sophie replies to it, saying that Claire’s love for Lorenzo is as real now as it was 50 years ago and that she shouldn’t give up on it. It is after seeing Sophie’s reply to her original letter that Claire decides to come back to Italy and search for her long-lost love. So touching, in fact, is Sophie’s response to Claire’s letter that the woman reads it out at her wedding to Lorenzo near the end of the movie.

In the process of finding Claire’s Lorenzo, who she fell in love with 50 years ago, Sophie and Claire compile a list of 74 men named Lorenzo Bartolini, each of whom could be the man they are searching for. They meet multiple men named Lorenzo during their subsequent search, including a lord who lives on a lavish estate and a slightly senile man who lives in a nursing home.

However, the low point in the film comes when they are pointed in the direction of a graveyard, where one particular Lorenzo Bartolini lies, buried. Fearing that an outcome like that would leave his grandmother even more heartbroken, Charlie quarrels with Sophie about egging Claire on in looking for Lorenzo. This is the fight that eventually leads to him learning about Sophie’s own painful past and possibly results in the two becoming closer due to their argument.

Fortunately, the Lorenzo whose grave they find themselves at is not the one that Claire fell in love with, though, for a time, it seems like that. Since Claire could only tell whether a man was the “real” Lorenzo or not after meeting him, she is unable to know for sure whether the man who is buried is, in fact, the man she is looking for or not. Only after she chances upon the real Lorenzo’s grandson, who tells her that his grandfather is alive, that we know for sure that the Lorenzo whose grave they visit was not the one they were looking for and that Claire’s Lorenzo is still alive.

Read More: Where was Letters to Juliet Filmed?