London Has Fallen Ending, Explained: Does The President Die? 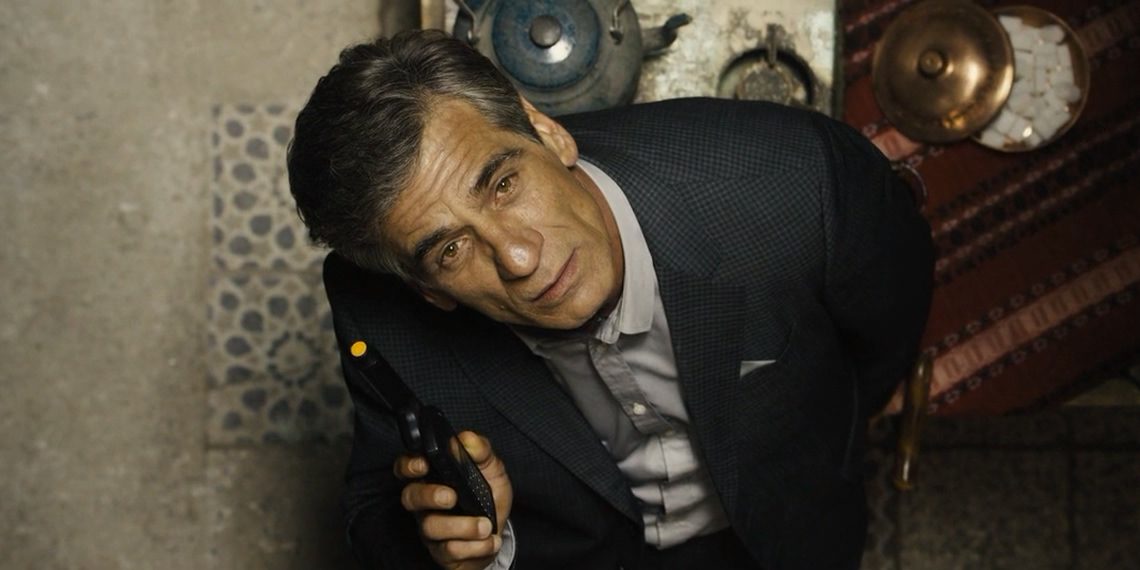 Helmed by Iranian-Swedish director Babak Najafi, the 2016 action thriller movie ‘London Has Fallen’ packs an explosive punch if you are ready to take it. The film is the second installment in the ‘Has Fallen’ franchise, after the 2013 movie ‘Olympus Has Fallen.’ After the British prime minister’s death, US President Benjamin Asher and his convoy fly to London to attend the funeral ceremony.

However, as an army of terrorists unveils jarring chaos, civilian life in the city comes to a standstill. Criminal mastermind Aamir Barkawi takes the blame and promises to execute the US president on a live broadcast. While the Brits suspect foul play inside, Banning must protect Asher from the terrorist horde. The movie is a literal blockbuster, fraught with twists and turns and featuring a star-studded cast ensemble including Morgan Freeman, Aaron Eckhart, and Gerard Butler. If you seek to follow the fast-paced ending in greater detail, let us now dissect the final minutes bit by bit. SPOILERS AHEAD.

Mastermind terrorist and international arms dealer Aamir Barkawi, who ranks high on the Global most wanted list, attends his daughter’s marriage. Meanwhile, G8 intelligence picks up a signal from the location and initiates a drone strike. Barkawi seemingly ends up dead, along with his daughter. The story begins two years following the prologue.

The death of British Prime Minister James Wilson has cast a shadow on international politics, and the political leaders from G7 member countries turn up at the funeral. With all the nations having their security team, the event soon becomes a spectacle. The media touts the funeral ceremony as the most protected event on earth.

Benjamin Asher, the US president, is also among the dignitaries, but Secret Service Director Lynne Jacobs knows how difficult it would be to protect the President. With President’s private bodyguard Mike Banning, she fixes the route of the entourage — from Stansted Airport to Somerset House via a 12-minute Marine One ride to the St. Paul’s Cathedral, where the funeral ceremony would take place. The Brits cannot provide extra security cause their plates are full.

We come to know later that the security services contain a plethora of uniformed terrorists. The action begins as the President arrives at the Somerset House and shakes hands with Clarkson, the current prime minister. Little before they can gauge the intensity of the impact, uniformed gunners start firing rounds at civilians. Not long after, we see visceral explosions at the St. Paul’s Cathedral, Buckingham Palace, and the Chelsea Bridge.

The Italian Prime Minister Antonio Gusto dies while on a tour of Buckingham Palace. Japanese Prime Minister Tsutomu Nakushima, who remains stuck in the traffic during the explosion on the bridge, has a similar fate. Now, as the Vice-President takes the helm of the situation from the White House, Benjamin Asher and Mike Banning must withstand the damage on the ground and make it out of the mayhem alive.

London Has Fallen Ending: Does The President Die?

For Mike Banning and most officials in the US, the President’s safety is of utmost priority. Therefore, shortly after the attack, Banning takes the President to an MI6 safe house, run by Jacquelin “Jax” Marshall. At the haven, they get the message of the Vice-President, who assures them that a delta team is on the way to rescue the President. Only about 30 minutes after the message, they find a delta force outside the perimeter of the safe house.

However, in no way can a legit delta force reach the location within such short notice, and Banning concludes that their site has been compromised. But Banning and Asher escape the safe house, finding a bulletproof car at the garage. They almost reach a secure location, but a truck T-bones them before they know it. The terrorists capture Asher, taking him to an under-construction building. Mike, meanwhile, catches up with the actual delta force and gets to the location.

It is almost eight o’clock, and Kamran Barkawi, the son of Aamir Barkawi, attempts to execute Asher. But Mike reaches the scene in the nick of time. After some gunfight, they flee the scene. When surrounded, Mike asks the delta force captain to charge the explosives he put earlier on a pipe. Mike and Asher take a leap of faith through the elevator shaft while the building goes up in flames. In the end, the delta force examines the debris, and they find the President in one piece.

Is Aamir Barkawi Dead or Alive?

The delta team successfully rescues the President with some ingenuity from Mike Banning. However, towards the movie’s end, Barkawi calls Vice-President Allan Trumbull, threatening that the war is not over. As the US drones have killed his daughter and now Kamran, Aamir’s hunger for revenge has only increased. However, Trumbull asks him to look up in the sky.

As Aamir looks up in the sky, he mentally prepares himself for the imminent doom. Trumbull, who was waiting for Barkawi’s call (more like waiting to trace the call to Barkawi’s location), clears the drone to engage. The drone hits Barkawi’s hideout with a spectacular explosion, killing him and most of his guards. Therefore, in all certainty, Barkawi dies in the attack.

Does Benjamin Asher Leave His Presidency? Does Mike Leave The Job?

Benjamin and Mike both survive the terrorist attack. In the movie’s final sequence, we meet Mike, back at home, with his wife and a baby girl he has named Lynne after the deceased Secret Service Director. Judging by the incomplete letter typed on his laptop, Banning toys with the idea of leaving his service. However, right then, Allan Trumbull addresses the nation. Trumbull is the Vice-President for the time being, but in the absence of Asher in the office, he takes the helm of the administration.

However, as Allan becomes the President in the movie’s third installment, we think that Benjamin Asher ultimately gives up his presidency to look after his family. After the traumatic episode, he has seemingly started to value his life, and others around him, more than a prestigious position. On the other hand, Allan speaks of the necessity to act. Inaction only makes you as guilty as the perpetrator since you choose not to act. After hearing the inspiring speech, Mike deletes his resignation letter. Therefore, we do not think that Mike will leave the job, but Asher indeed resigns his post sooner or later.

Read More: Where Was London Has Fallen Filmed?