‘Love on the Slopes’ is a Must See. Here Are All the Beautiful Reasons. 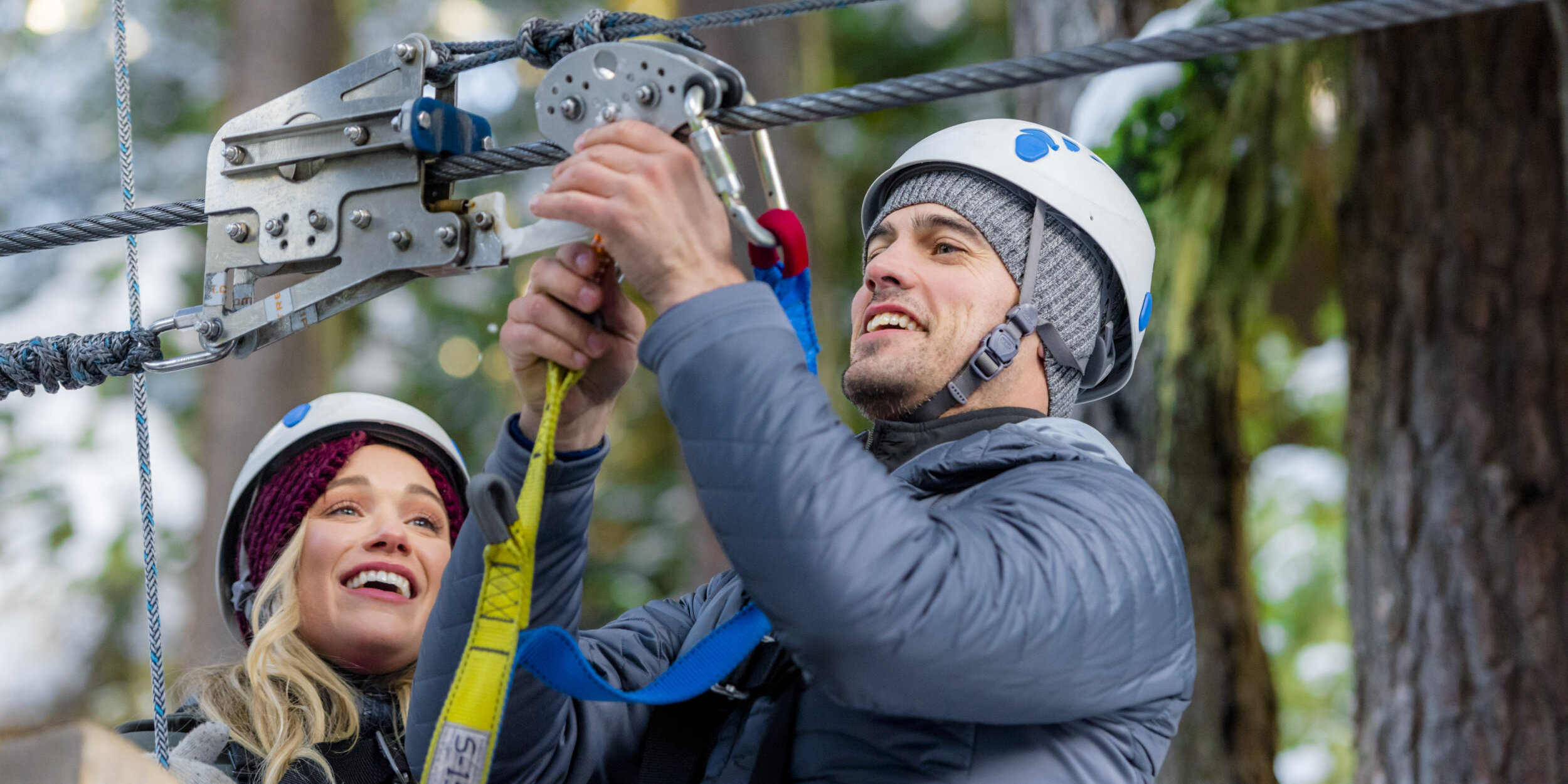 ‘Love on the Slopes’ is a romantic comedy about Alex, a copy editor at a travel magazine who aims to climb up the ladder and become the travel writer. So, what’s stopping her? Well, in order to get the post, she has to go to Ridgeline Resort and write a story about ultimate winter sports after experiencing it first-hand.

A stumblebum at adventure sports, Alex meets with a professional athlete and photographer, Cole Taylor, and asks him to guide her through it all in return for offering assistance for his art festival. Cole reluctantly obliges. On learning about this, Alex’s boss asks her to secretly pursue a story on Cole instead. As Cole helps Alex in overcoming her fears, they are struck by cupid’s arrow. But what happens when Cole finds out?

Love on the Slopes Cast

Part of Hallmark’s Winterfest line-up, the winter romance stars Katrina Bowden as Alex Burns, who aspires to be the travel writer for the magazine All Around the World. You may know her from ‘30 Rock,’ ‘American Reunion,’ and ‘Public Morals.’ Once the ‘Sexiest Woman Alive,’ Bowden also runs a fitness blog under the name ‘Fit Kat.’ Thomas Beaudoin appears as the snarky yet bodacious sports enthusiast, Cole Taylor. He owns the Ridgeline Resort that Alex is visiting, to cover her story. He is best known for ‘The Spirit of Christmas,’ ‘The Blacklist,’ and ‘Trauma.’

Paul Ziller serves as the director, while the movie is written by Bruce D. Johnson and Kirsten Hansen. It has received appreciation for satiating the hunger of all the adrenaline junkies, for delivering a perfect mix of romance and comedy and also for its magnificent visuals. If you wish to know more about the picturesque filming locations, fret no more, for we have the answer.

Love on the Slopes Filming Locations

A major chunk of the movie features the lead actors frolicking around Ridgeline Resort. Well, sorry to break it to you but the Ridgeline Resort in Colorado is a purely fictional location, made up for the film. The shooting of ‘Love on the Slopes’ actually took place in the Whistler Mountain in British Colombia and some parts of Northern Vancouver, Canada. The filming took place from October 27, 2017 to November 17, 2017. Read on to know the specific locations.

In the film, Alex and Cole partake in various adventure sports like skiing, zip lining, tubing, rock climbing, and bungee jumping. Well, we aren’t certain about our stars experiencing bungee jumping without the involvement of their body doubles but we are pretty sure that the location wasn’t Ridgeline Resort. The production unit used the famous Whistler Blackcomb Resort, in British Columbia, for shooting the bungee jumping and zip lining scenes in the film. Check out the picture from the set. If you look closely, you can spot the ‘Columbia’ tag printed on the woman’s T-shirt. 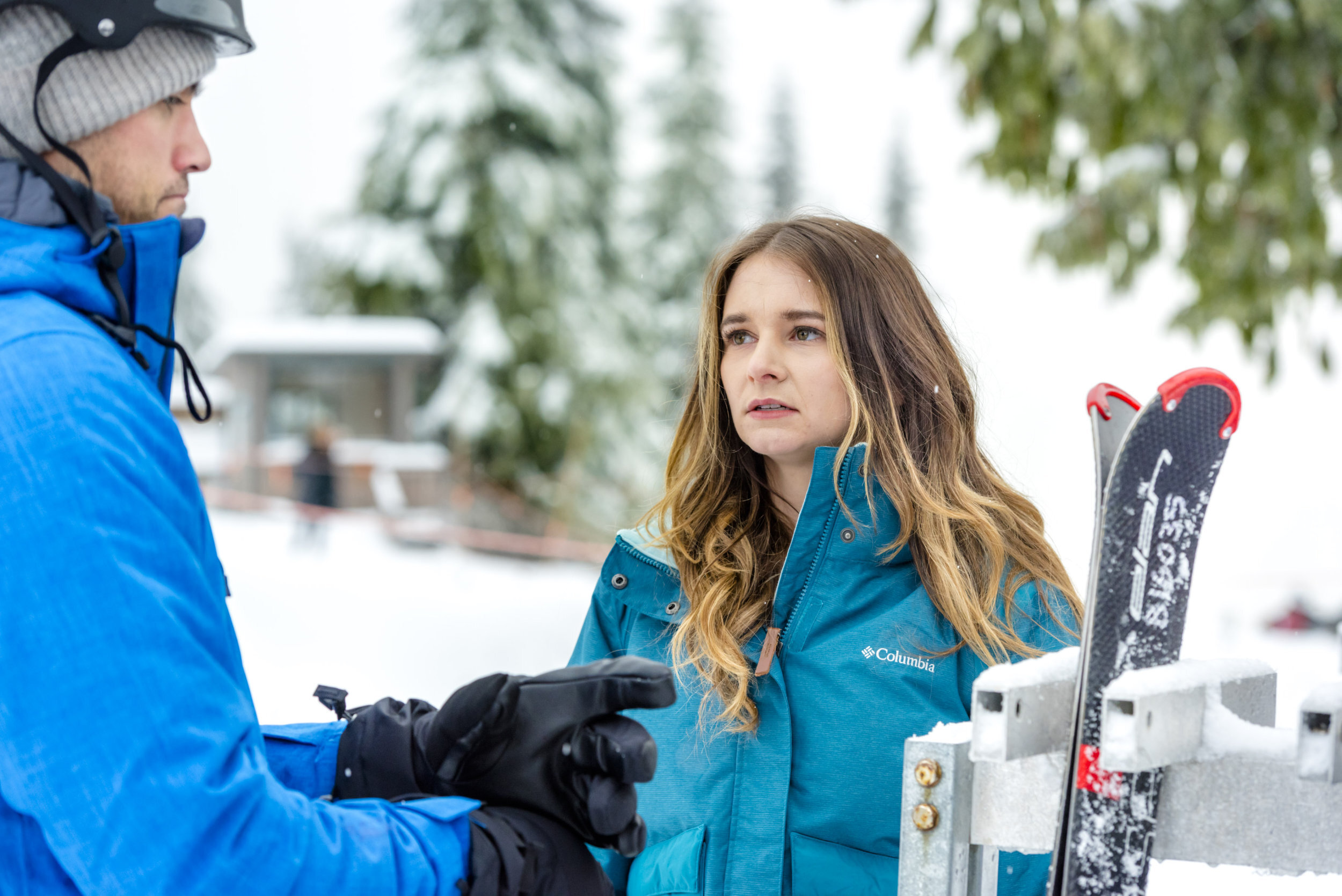 Also, here is a picture shared by Katrina Bowden, zip lining 1,100 ft above the canyon.

Well, like I mentioned earlier, bunjee jumping is no mean feat and Katrina Bowden posted a picture stating the same in a humorous manner. Also, now we know where the final kissing scene was shot.

Here is another one from the actor, expressing how mesmerized she is, by the eye-catching view from Whistler, also known as the Canadian Winter Wonderland.

The skiing and rock climbing scenes were shot in Grouse Mountain Resort – The Peak of Vancouver. Here’s a picture of  Alex (Katrina), while shooting the skiing scenes. Clearly a pro.

The rock climbing scene between Alex and Cole, was shot on the same location. Katrina shared the picture to her Instagram.