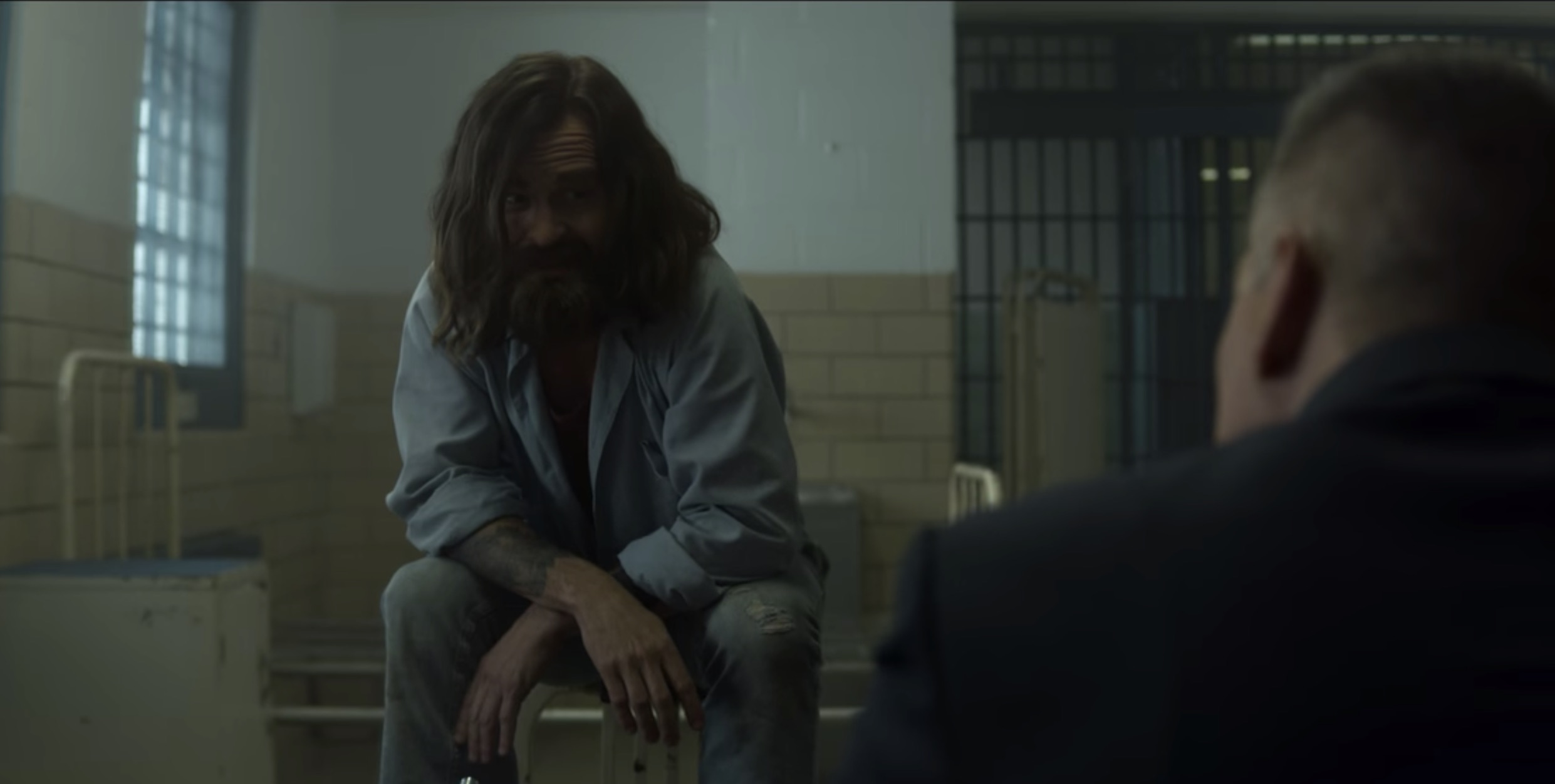 Episode 5 is not just the best episode of this season, but possibly one of the best one hour of television you will ever see. It features the much-anticipated interview with the infamous Charles Manson. And boy, that 15 minutes of super-charged interview of Manson is definitely the highlight of this season.

The episode wastes no time in plunging us back into the action and there are very few moments of respite throughout its runtime. Tench is once again squarely in the spotlight as he has to face the fallout of his son’s actions while prepping for one of the most significant interviews the BSU has conducted. We get a little more insight into the political acumen of the new director who knows exactly which hands to shake to make the BSU a respected unit within the FBI. If you have been recently taken in by the Charles Manson murders, titled Helter Skelter, especially after Quentin Tarantino’s ‘Once Upon a Time in Hollywood‘, then you are bound to find Episode 5 absolutely delectable.

Episode 5 begins immediately with the Tench family having to deal with the son’s action. Understandably Bill is devastated as he has to come to terms with the fact that his son might harbor violent tendencies. Even as the family has to go through a grueling and complicated legal procedure to determine whether their son can be exonerated, Bill has to prepare for what could be the most significant interview for the BSU.

As promised in Episode 1, the new boss gets them an interview with Charles Manson. While there, the two also get a chance to interact with Ed Kemper again. Kemper helps them understand the BTK killer’s motive of returning to crime scenes. Speaking of the BTK killer, we are offered an ominous glance into his life as we see him bury some deep secret in a lawn. Coming back to Manson, the interview turns out to be much more volatile than the two agents expected — and frankly any of us expected.

Manson is arguably the most infamous killer of the 20th century and over time his legend has only grown. However, in the episode we also find out that he is actually an equally fascinating interview subject because he is the first person the BSU interviews who has not directly killed anyone. Manson’s delusions of grandeur become self-evident as he goes on a rant, although he makes some points that are compelling. It is easy to see how his followers could become entranced by him to carry out his commands. Manson strikes a nerve with Tench who has a tough time dealing with everything that he is going through because of his son.

Overall, in terms of all the infamous interviews ‘Mindhunter’ has set up, this has been the most impactful, mostly because it puts an unexpected spin on Manson’s conviction and because Manson’s perspectives of life and the world are something that makes Holden pause for a moment as well.

Towards the end of the episode, we are made aware of how far politics can play a role in the success of the BSU. The new boss invites Carr, Tench, and Holden to a party where they meet the big shots in the bureaucratic structure. Tench makes a good impression on them, regaling them with stories, and though Holden is a bit uptight at the party, no one doubts his seriousness and commitment to the job. There’s also a very interesting moment when Carr has to ward off sexual advances from one of the senior officials. The moment proves how sexism was rampant during those times.

At the very end, the Atlanta child murders are pushed to the forefront of our attention as Holden gets a call from Barney about another victim being found strangulated. The episode ends with a closer look at Manson’s message for Holden which tells him that every day he sleeps, someone like Manson destroys the world. This is sure to spur the young agent into action. We are sure in the next episode will see the BSU try and assist in the case as it begins to turn more gruesome.

Episode 5 is the most action packed episode of the season yet. The show has distinguished itself for offering a peek into the minds of the criminally insane so that we understand the psyche or the tormented views of these people. This episode gives us the maddest of them all, Charles Manson. Manson’s vision of chaos is wonderfully expressed in Tex’s narrative and viewers get an idea of how the narratives are contradictory since both Manson and Tex are unreliable due to their twisted perspective of things.

Overall, ‘Mindhunter’ seems to be picking up pace as well since it is teasing us more about the BTK killer and what he might do next. We expect the next few episodes to focus on the killer behind the Atlanta child murders and the BSU will have to bring their best game to apprehend whoever the killer is. However, what will be most interesting is to see Tench and Holden in action as the next episode is bound to see both agents out on the field.