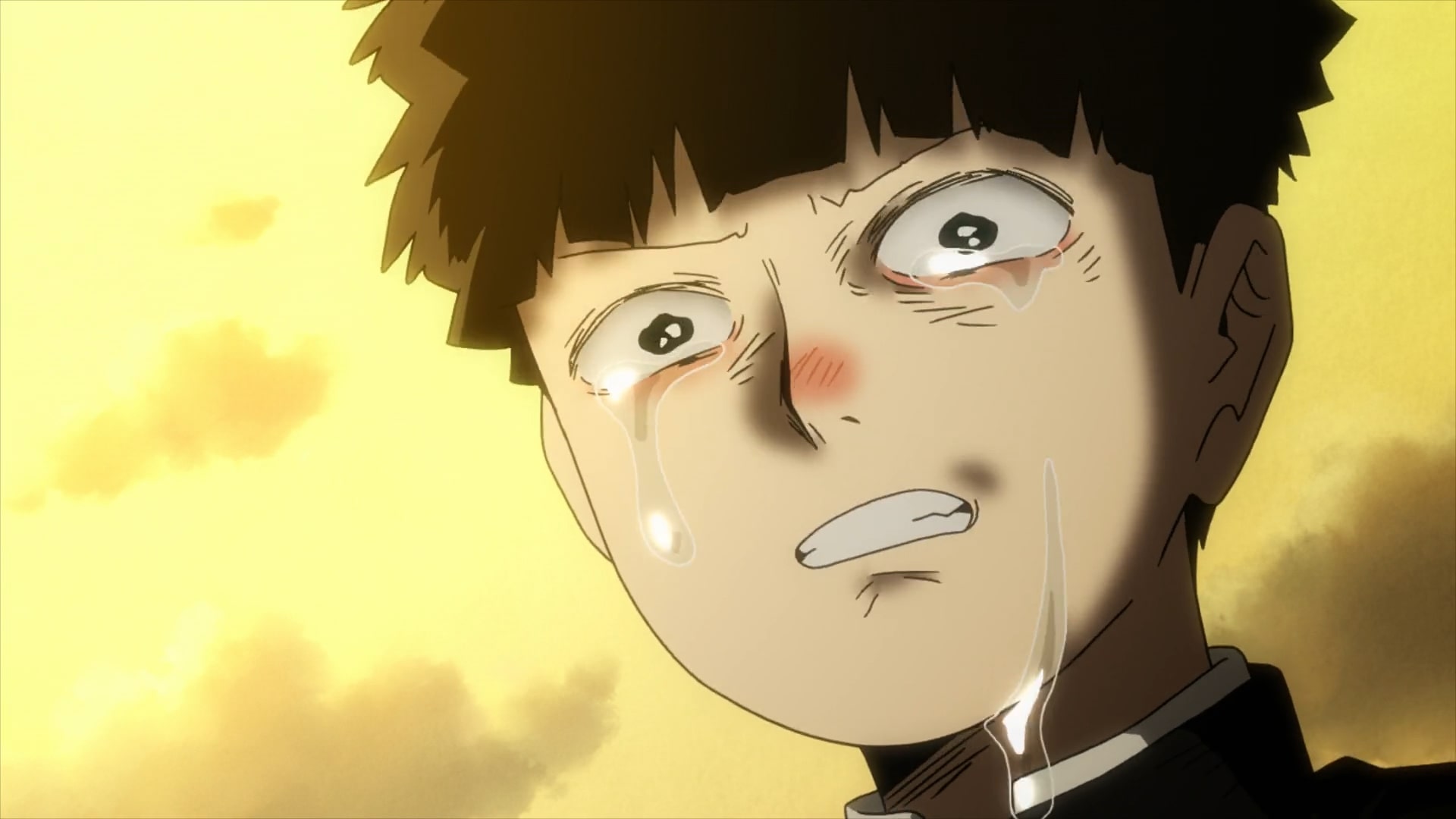 In ‘Mob Psycho 100’ season 3 or ‘Mob Psycho III’ episode 12 titled ‘Confession ~the future~’ Shigeo continues to destroy the city until he is confronted by Reigen who has a confession to make. With his honest admission of his mistakes, Reigen manages to calm Shigeo down. With a renewed optimism that everything will work out in the end, Mob goes to meet Tsubomi and tell her about his true feelings. Here’s everything you need to know about the ending of ‘Mob Psycho III’ or ‘Mob Psycho 100’ season 3 episode 12. SPOILERS AHEAD!

After Mob has defeated Ritsu, he continues to walk toward the park to finally meet Tsubomi who is waiting for him despite the storm that is making headlines. While everyone appears to have given up, Reigen walks straight toward Shigeo’s direction even when Serizawa tells him to turn back. Eventually, Reigen tells Serizawa that he will be fine on his own, after which the latter returns. When Reigen finally sees Shigeo, he calls out for him several times but Mob appears to ignore him. 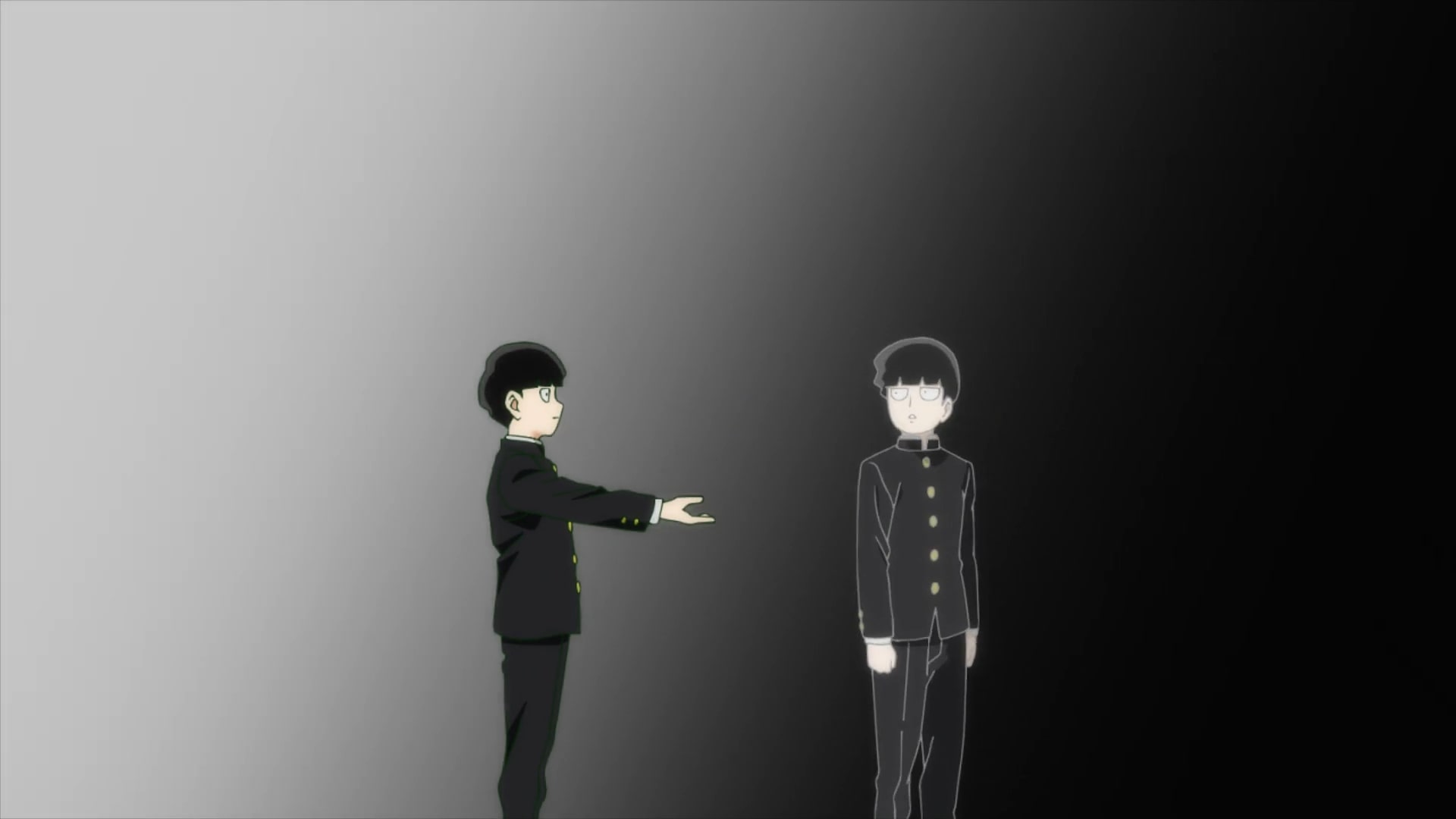 However, this does not deter Reigen’s confidence even in the slightest and despite the out-of-control psychic powers of Mob, he manages his grab his leg. Even to get to his point, he had sustained a lot of injuries but continued to walk directly toward the center of chaos without a care for his own well-being. When Mob continues to walk away, Reigen summons all his powers to finally confront him. At this point, Mob tries to blow away his master with his psychic powers but is surprised when his master is able to hold his ground.

It turns out that Reigen is possessed by Ekubo, who tells Mob that he was not destroyed while fighting the Divine Tree. Eventually, he manages to return when he was drawn into the spiral of Shigeo’s powers. But Reigen tells Ekubo to give him and Mob some time as he desperately wants to discuss something important. After Ekubo asks both of them not to fight in the meantime, he lets the duo discuss whatever they want to talk about. 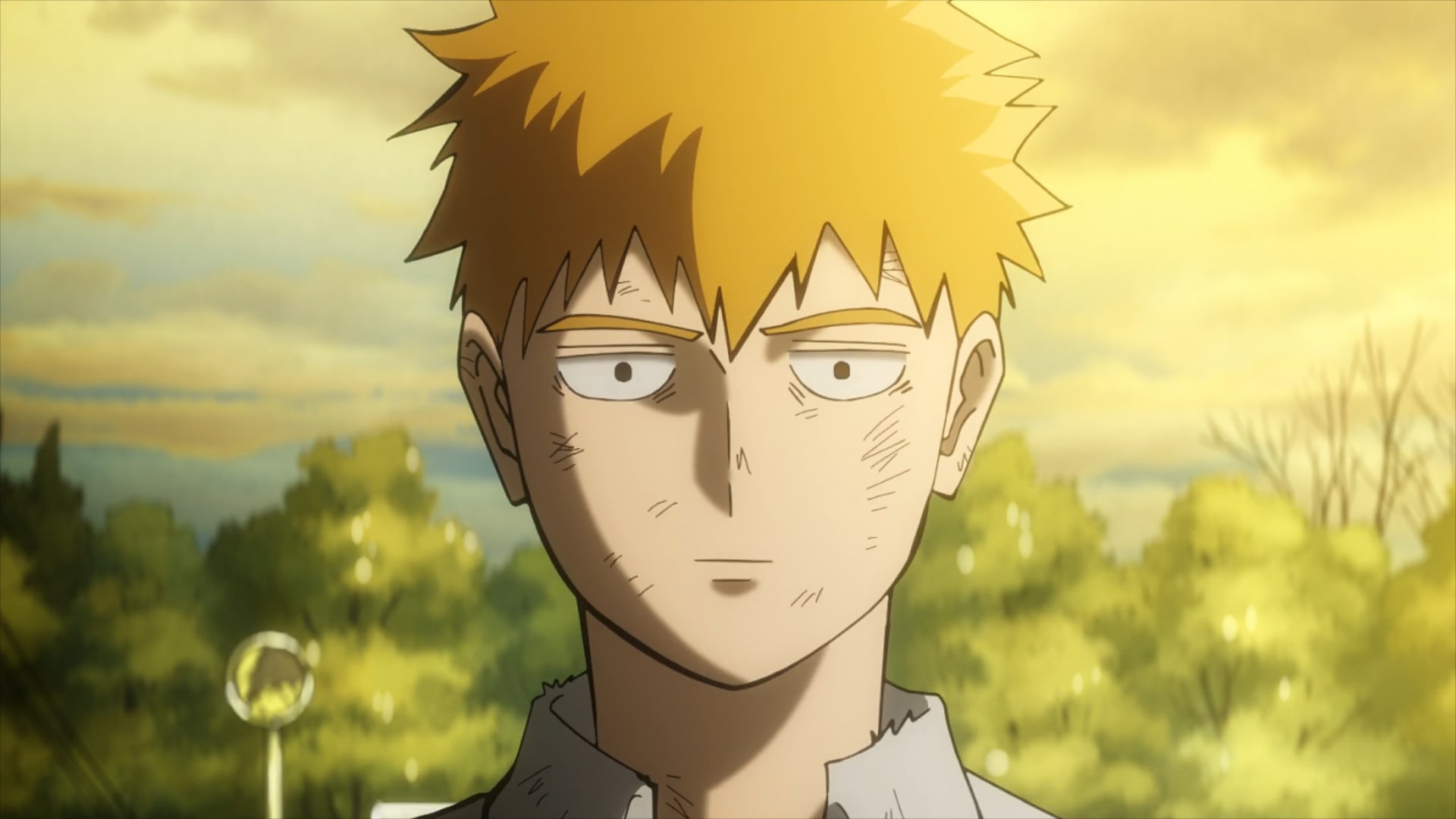 Once Reigen has ensured that he can talk to Mob one-on-one now, he tells him that he does not possess any psychic powers and has been lying all this time. Reigen admits that he has used Shigeo’s powers for his own personal gains and appears to have felt guilty about it. He then reassures Mob that everyone has parts of them that they want to try to shun away, but it’s important to accept ourselves with all our flaws. Reigen argues that life may not be perfect, but things will eventually work out and all will be okay in the end.

After Reigen manages to convince them that he needs to accept himself as he is and things will eventually work out, Mob finally manages to take back control. Inside, his insecure half is still doubtful that he may get rejected by Tsubomi but Mob’s calm and kind half reassures him that all will be okay. While Reigen and Ekubo decide that it will be best for them to let Mob go alone, the young psychic walks calmly towards the park to finally tell Tsubomi about his feelings. Sometime later, Shigeo returns and tells his friends that Tsubomi has rejected him by saying that she is yet to see him in that way. 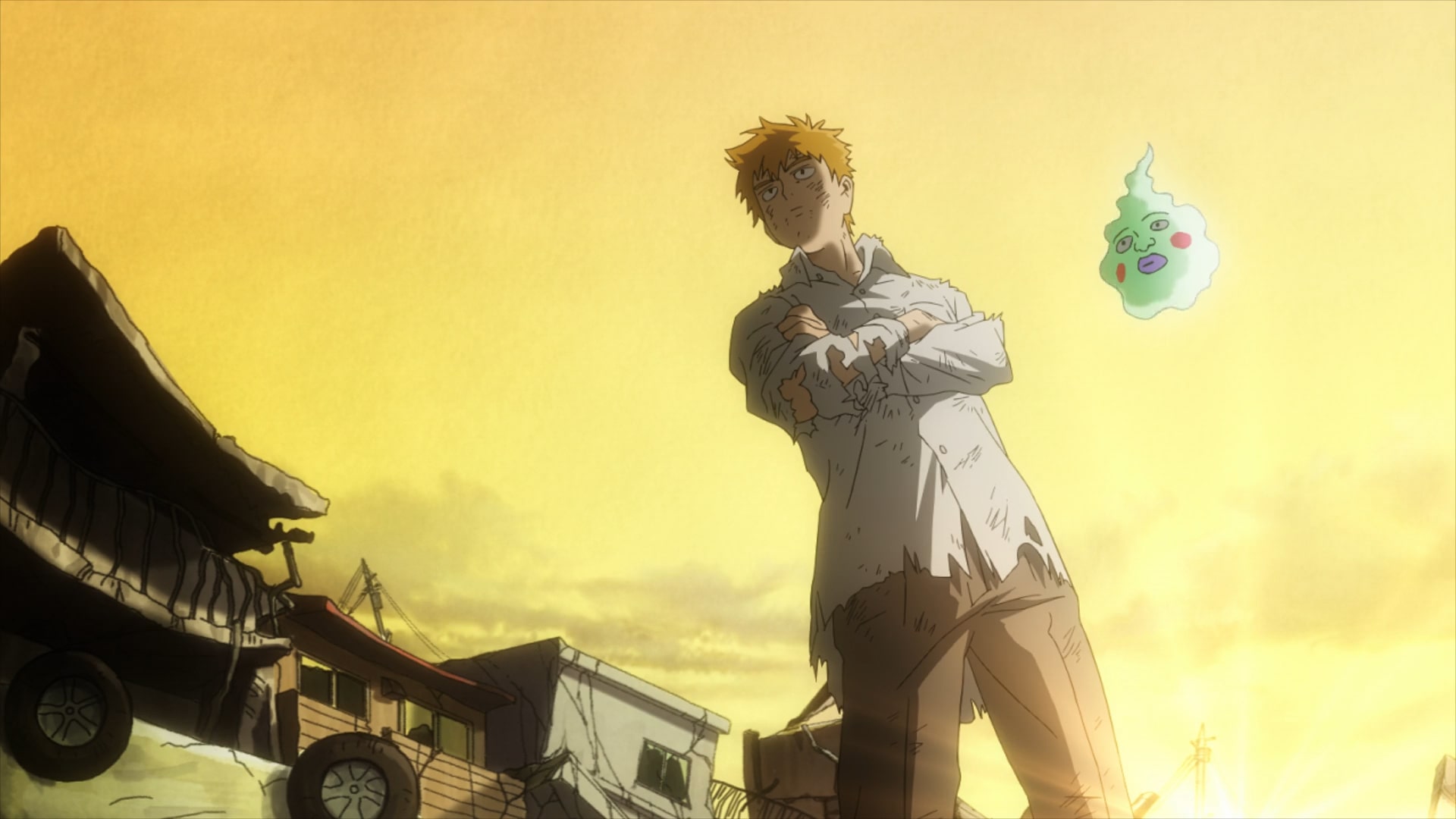 Mob then starts crying profusely and Reigen reassures him one more time that such things happen all the time, implying that he does not need to worry too much about it. A few weeks after that Shigeo starts living his normal life again. His friends in the Telepathy club plan another trip supposedly to Mud Boat Mountain in order to summon the aliens again. Meanwhile, Shigeo has been working hard with the Body Improvement Club as well and has gotten into good shape in the last few weeks. He seems very confident and assertive. When Shigeo is walking back home with his brother, he asks Ritsu to join the Body Improvement Club too.

But Ritsu declines after making the excuse that he is too busy with his responsibilities at the Student’s Council. Later that day, the two brothers accompanied by Hanazawa visit the Spirits and Such Consultation office where Tome and Serizawa are waiting for them. Reigen is yet to return to the office as he has been called by a patient for some exorcism work. It turns out that a lot of Mob’s friends are gathered at the office today. When Reigen finally returns with Ekubo, they give him a birthday surprise. 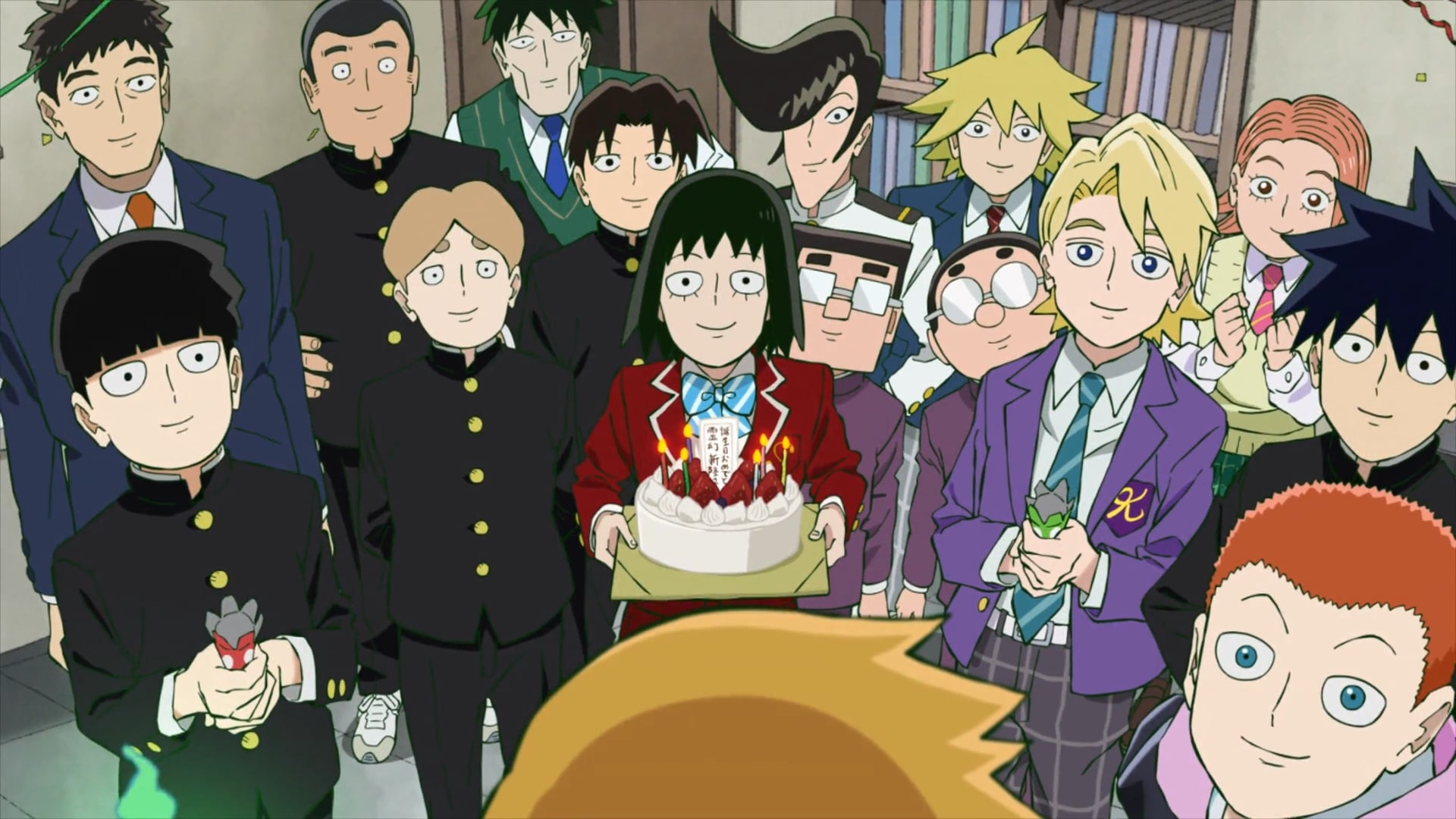 The episode ends with everyone laughing at Reigen after his face smashes into the cake while trying to protect it from falling to the ground. After losing control of his psychic powers, it seems that Mob has finally adapted himself to normal life and is very confident in himself. He also talks to Tsubomi from time to time and appears to maintain a friendly relationship with her. This probably marks the end of Shigeo’s journey from an immature and afraid eighth-grader to a confident young teenager who knows that despite the uncertainity, things will eventually work out in the end.