‘Modern Love‘ season 2 is filled with diverse but equally feel-good and refreshing tales of love. However, the second season of the romantic series saves what is arguably its most heartwarming episode for the last. The eighth episode titled ‘Second Embrace, With Hearts and Eyes Open,’ directed by John Carney, revolves around Liz and Van, a couple who have separated some time ago.

However, they find themselves slowly reopening their lives and hearts for each other. Naturally, viewers must be curious to find out whether Liz and Van do end up together. Here’s what happens in the episode and what the ending means for Liz and Van’s future. SPOILERS AHEAD!

In ‘Second Embrace, With Hearts and Eyes Open,’ we meet Liz, a middle-aged woman with two daughters who has separated from her husband, Van. We are given subtle clues that hint their marriage fell apart, but the two maintain a friendly relationship for the sake of their daughters. As they become comfortable in their new role as co-parents, they become more comfortable with each other. 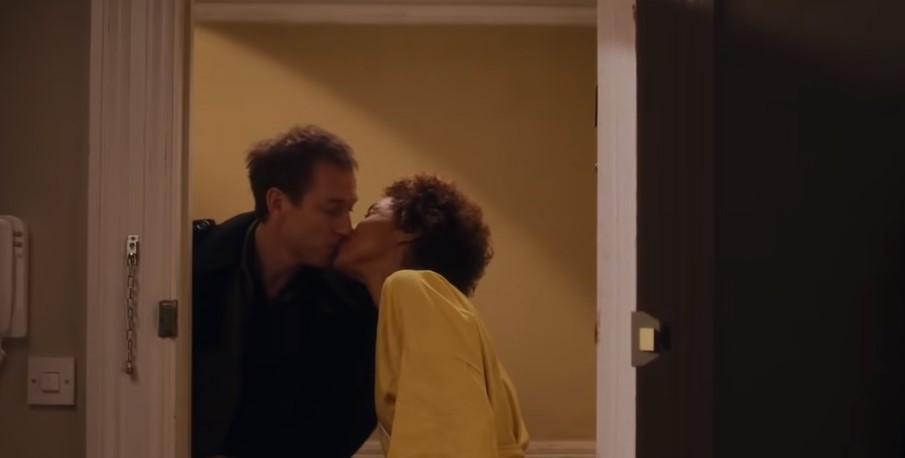 After their daughter, Betty, wins a school talent show, the two spend the night with each other and rekindle their long-lost romance. A few months pass, and Van decides to propose to Liz. However, at a dinner, his proposal coincides with Liz revealing that she has breast cancer. Van sends Liz a voice mail, which she leaves unheard.

Liz goes through her cancer treatment, and the surgery seems to be effective. She returns home, and Van helps her around with chores and taking care of their daughters. This allows Liz to see Van in a new light, and she is more welcoming of his presence in her life. However, Liz’s cancer reemerges, and things look dire. How Liz and Van deal with the unexpected situation that life throws at them makes up for the rest of the plot.

Towards the end of the episode, Liz expresses to her friend that she thinks she never stopped loving Van. However, she is skeptical whether they can rebuild their relationship. Liz’s doctor suggests a clinical trial for her cancer. Liz signs up. In the closing moments, Van gives Liz a Moonstone ring that she liked at a flea market, but it did not fit. Van has it altered, and Liz is delighted to receive the ring. The two reconcile and share a kiss.

The audience never gets to see whether the couple remarries and lives happily ever after together, but there are some moments that help us piece together the answer. Earlier in the episode, Liz seems impressed by how Van has changed and become more mature and responsible after their separation. However, she does not intend to remarry him.

Later in the hospital, Liz hears the voicemail Van sent her. In the voicemail, Van professes his love for Liz. The message causes Liz to have a change of heart about Van. Her initial skepticism is not unwarranted. After all, it is difficult to fall in love with someone again, especially after spending time apart. Rebuilding a failed relationship is even more challenging as there is no way to know for sure that things will turn out differently.

However, Van’s message saying that he never stopped loving Liz is just the reassurance Liz needs to let him take a more prominent role in her life. Slowly, she starts seeing Van means what he said in the voicemail. Van stands beside Liz like a rock through a challenging period in her life.

In the end, Van gives Liz the Moonstone ring not as a proposal but as a gift, which perfectly sums up how he has been learning through his mistakes. Liz tells him that had he proposed; she would’ve said yes. The tender moment bookmarks their reconciliation and strongly suggests that the couple will remarry in the future. Van says that he will propose again, so that should wipe away any doubts, and it is safe to say that Liz and Van get their happily ever after.

Liz’s cancer turns out to be a blessing in disguise for her as it forces Liz to live in the present and give up any inhibitions she holds from her past relationship with Van. It allows her to see Van is a fantastic person. Irrespective of whether they have a long-term future or if she doesn’t have a lot of time to live, she wants to spend her present with Van. Therefore, Liz says that she would’ve said yes to Van’s proposal.

The bittersweet reconciliation becomes even more powerful because of Liz’s cancer. While Liz’s health deteriorates, her relationship with Van slowly heals. When we last see Liz, she says that she hasn’t started taking the new medicines. Therefore, her cancer isn’t completely cured just yet. The episode is based on an article of the same name published in The New York Times’ Modern Love column. The writer of the article did fully recover from her cancer. Hence, there’s no reason to believe that the same won’t be true for Liz after the treatment.