Money Heist Korea Ending, Explained: Why Did the Professor Plan the Heist? 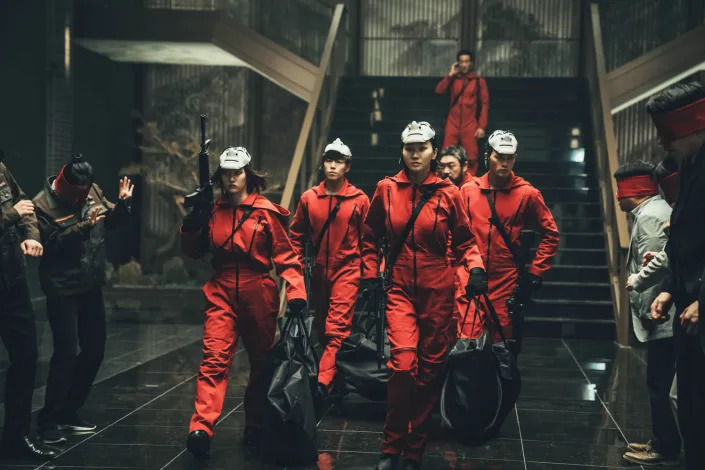 When the Spanish series ‘Money Heist’ first became available to the global audience through Netflix, it almost instantaneously garnered tens of millions of fans all over the world due to its gripping and action-filled narrative, spectacular characterizations, and perfect casting. As the series creator Álex Pina and his team intended, the show and its characters are quintessentially Spanish, giving the international audience a much-needed break from the countless heist shows and films Hollywood has produced. The strong presence of regionalism in almost every aspect of ‘Money Heist‘ makes the show perfect for a remake in different settings. And that’s what ‘Money Heist: Korea – Joint Economic Area’ essentially is.

The Korean remake is set in a version of the Korean Peninsula where North and South Korea have finally decided to set aside their differences and reunite. They have turned what was used to be the Joint Security Area, located between the borders of both countries and a symbol of division, into the Joint Economic Area. There, the governments of the two countries have set up the Unified Korea Mint, which now prints the new currency of Unified Korea. The Professor (Yoo Ji-Tae) targets this Mint, intending to take 4 trillion won from there. Here is everything you need to know about the ending of ‘Money Heist: Korea – Joint Economic Area’ season 1. SPOILERS AHEAD.

Although politicians and business people on both sides promised that the unification would bring prosperity for all Koreans, the most predictable thing happened: the rich got richer. Tokyo (Jeon Jong-seo) comes from North to South to pursue a better life but ends up working at an escorts’ club. She kills her boss and one of his underlings after they try to rape her and another immigrant, prompting her to go on the run. Right when Tokyo has given up all hope and is about to shoot herself in the head, the Professor approaches her with an offer she can’t refuse.

Tokyo subsequently meets the rest of the team, and they are more or less the same as they are in the original series, except for maybe Berlin (Park Hae-soo), whose real name is Song Jungho in the Korean adaptation. He spent most of his life performing forced labor at Kaechon Camp, a real facility where North Korea allegedly houses its political prisoners. Berlin eventually led a successful against his captor and since has become North Korea’s most wanted man. Like in the original series, Moscow and Denver are father and son. The Professor recruited Moscow because he is a master differ, while Denver, who is a brawler, became part of the gang because his father requested the Professor.

Rio (Hyun-Woo Lee) is a gifted hacker and rebellious scion of a family of doctors. Nairobi is a con artist and serves as a quality manager of the group as the character does in the original series. Oslo and Helsinki are fixers and former gang members from Yanbian. The robbers hijack a currency convoy to gain entry into the Mint and quickly take over the facility, taking all its employees hostage, including Cho Youngmin (Park Myeong-hoon), Arturo Román’s counterpart in the Korean remake, and Yoon Miseon (Joo-Bin Lee), Mónica Gaztambide or Stockholm’s counterpart.

As the robbers let the authorities know that a heist is in progress inside the Mint, Seon Woojin (Yunjin Kim), South Korea’s leading hostage negotiator, is placed in charge of the joint task force along with Captain Cha Moohyuk (Kim Sung-oh) an officer in North Korea’s Ministry of Security. Woojin is Raquel Murillo or Lisbon’s counterpart in the Korean remake. Like Raquel, Woojin is tricked by her Professor, who grows close to her under a false identity to keep tabs on what the authorities are doing.

In the season finale, the Professor’s real reason for organizing the heist starts to become clear. Park Chulwoo, a military officer sent to infiltrate the Mint and was believed to have been killed by Berlin, is revealed to be alive, which turns the public opinion against the authorities for the first time during the heist.

In the season 1 finale, we are given a glimpse of the Professor’s past. It turns out that he used to be a real educator until a few years before the heist. His main research topic used to be the economic impacts of reunification, which drew the interest of various people in power, including Woojin’s former husband, Kim Sangman. At present, he is touted to be the next leader of the country. Sangman took him to Joint Security Area to introduce him to Oh Jaeyun, who appears to be one of the most powerful businesspeople in South Korea. As we see at the start of the series, he is the head of the “huge South Korean corporation” that promised to make a large-scale investment in the North. The finale gives context to this. Apparently, the Professor and Oh Jaeyun worked together to initiate North Korea’s full open-door economic policy. Oh Jaeyun’s group provided the capital needed for such a massive endeavor, and the Professor came up with the plan.

However, as we can glean from Tokyo’s narration, the Professor came to regret the partnership. Tokyo even compares the Professor to J. Robert Oppenheimer, widely regarded as the “father of the atomic bomb.” This implies that the Professor’s work with Oh Jaeyun had a devastating effect on most of the people in the Korean Peninsula. We only get bits and pieces of news of the result of the unification throughout the series. The hope that people initially had about it has since soured. South Koreans have grown increasingly hostile toward northern immigrants. Moreover, the rich continue to hoard all the wealth. Realizing that he has helped create a Frankenstein’s monster, the Professor likely planned the heist, wanting to point out the inherent flaws of his own economic plans to the world.

What Does Anne Give to Soojin?

Anne Kim is the daughter of the US ambassador to South Korea. She is on a school trip along with other students from her class when the heist begins. Anne’s presence in the Mint is crucial to the Professor’s plans, knowing that while she is in the facility, the task force will think twice before they send soldiers.

The plan works almost until the very end, when Anne manages to slip one of the notes that the robbers have been printing in Woojin’s pocket. On it, she has written down every piece of information that she and some of the others have found out. This includes the most important piece of information of them all — the robbers are printing money inside the Mint. The longer the authorities wait, the more money the robbers can print. If and when Woojin’s reads the note, she is bound to order an immediate assault on the Mint, which will likely force the Professor to come up with a different plan.

Moohyuk has been told by his superiors that there is a mole among the South Koreans in the Joint Task Force. Although Moohyuk initially thinks it can’t be Woojin, the words of his superior officer almost convince him to the contrary. Ultimately, he admits to Woojin that he was wrong about her and finds a new person to be suspicious about, Woojin’s boyfriend, Park Sunho, who happens to be the Professor.

Aside from the task force members, Park is the only person who sees inside the main operation tent, so Moohyuk seems to have correctly deduced that the leak could have only come from the other man. Relying on his hunches, Moohyuk has decided to track the Professor down. However, he doesn’t yet know that Park Sunho and the Professor are the same person.

Read More: Is Money Heist: Korea a Sequel or Spin-off or Remake?