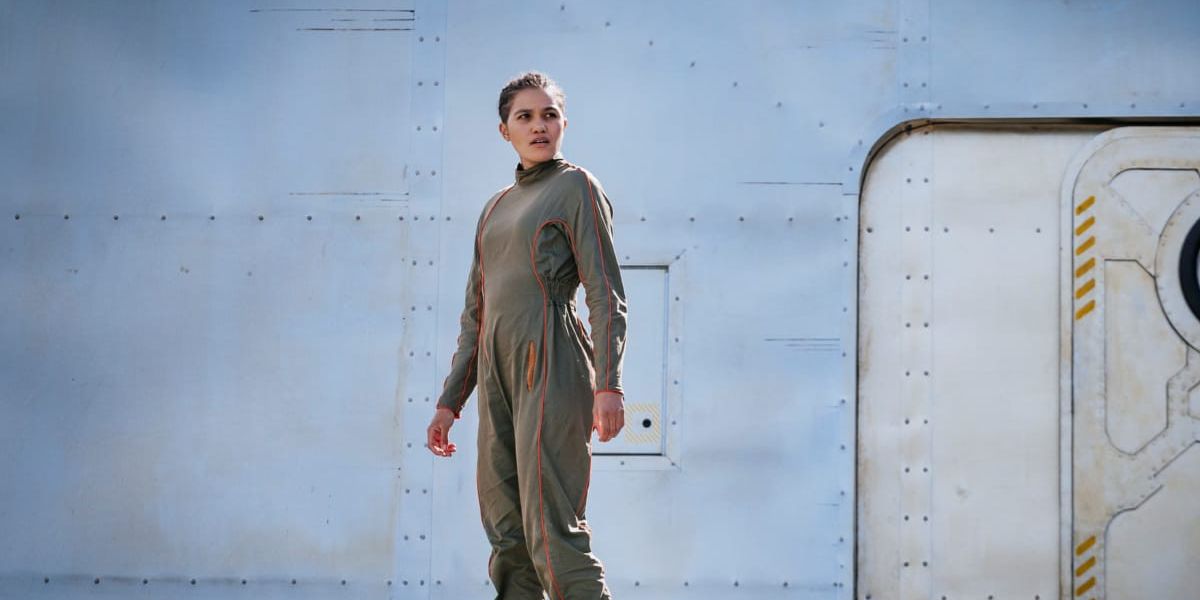 ‘Moonhaven’ is a science fiction series created by Peter Ocko (‘Black Sails’). It takes place in the distant future on a paradise-like human colony on the moon known as Moonhaven. However, trouble is stirred in the paradise after cargo pilot Bella Sway finds herself entrapped in a grave conspiracy that could end earth’s hopes of saving itself from certain doom.

The complex narrative introduces viewers to the Lunars/Mooners and their culture that is guided by the artificial intelligence IO. Many secrets lurk in the colony, and many questions are raised in the show’s double-sized premiere event. If you are looking for answers about the episodes’ events and ending, here is everything you need to know about the ending of ‘Moonhaven’ episode 1 and 2! SPOILERS AHEAD!

The first episode, titled ‘The Pilot,’ opens with Chill Spane, a resident of the moon colony who is escaping from a pursuer, her husband, Strego Nall. The two scuffle over a mysterious object that Chill is trying to protect. However, Strego kills Nall and flees with the object. The next day, Detectives Paul and Arlo discover Chill’s dead body. With the help of artificial intelligence, IO, they deduce that Strego is the killer. However, when they try to apprehend Strego, he attacks Paul and flees.

Meanwhile, on earth, which is strutting towards the fall of society, Indira Mare promises that IO will be able to help humans sustain life on the planet. On the other hand, cargo pilot Bella Sway learns of a last-minute passenger duo she must transport on her trip to the moon. After the bodyguard Tomm examines the ship, the other passenger is revealed as Indira. The journey is smooth, and the trio arrives at Moonhaven.

Indira tries to convince the council leader to step down before the First Wave of Lunars arrives on earth with The Bridge, the solution to all of humanity’s plight. However, the councilwoman refuses to step down. Meanwhile, Bella learns that she is Chill’s biological sister. A series of events unfold, leading to Bella running into Strego on her ship. However, Tomm catches the two and shoots Strego dead. Tomm attacks Bella, and she saves herself with the smuggled drug, The Singer.

The second episode, titled ‘The Detective,’ sees Paul investigating Strego’s death while protecting Bella. As Bella searches for her ship, Paul asks her to stay hidden. Meanwhile, Paul and Arlo learn about Bella’s past and her traumatic experiences during the Tremendous War. Indira is questioned about the plans to set up a new council. During the meeting, the council suspects that there is a member of the extremist earth group Terra on the moon.

Paul learns that Bella was trying to smuggle a drug known as The Singer back to earth. Thus, she is suspected of being the Terra agent. Bella is judged before a council, and Paul presents the facts that suggest Bella is guilty of smuggling. However, she is not responsible for the deaths of Chill and Strego. Paul pleads on Bella’s behalf and reveals her tragic past to the council. He asks the council to let her become his charge. Thus, Paul wants to help Bella heal from her past while connecting with the family she never knew.

Moonhaven Episode 1 and 2 Ending: What Does Bella Find in Chill’s Belongings?

In the first two episodes, Bella learns of her surprising connection to Chill and, in turn, Moonhaven. Bella’s tragic past is connected to her mother abandoning her as a child before moving to the moon colony. After moving to Moonhaven, Bella’s mother had another daughter, Chill. However, Bella is unaware of her biological sister until she arrives in the distant colony. Moreover, Paul suspects that Chill knew about her sister and tried to send her a message before her death.

In the second episode, Paul uses the IO’s technology to help Bella converse with her deceased sister. The IO gathers the remaining memories from Chill’s body and creates a projection that Bella can speak with. During the conversation, Chill fails to recognize Bella as her sister. It is implied that Chill is unaware of her biological sister and only remembers her blood sister, Asus. Thus, instead of giving Bella closure, the conversation raises a box of questions that the cargo pilot seeks answers to.

In the end, after she officially joins the Moonhaven community, Paul gives Bella a box. The box contains Chill’s belongings. Among the several items in the box is a bead. While Bella is unsure about the bead, Paul instantly recognizes it as a beacon. The beacon contains a hidden memory of Chill, which serves as a message for her blood sister. Instead, the message reaches Bella. The message is a warning about The Bridge. Chill states that The Bridge is a trap and it won’t save humanity. Instead, it will doom all of humanity and destroy everything. Thus, the episode ends with a game-changing note. The message leaves Bella with her sister’s quest to save humanity from The Bridge’s threats.