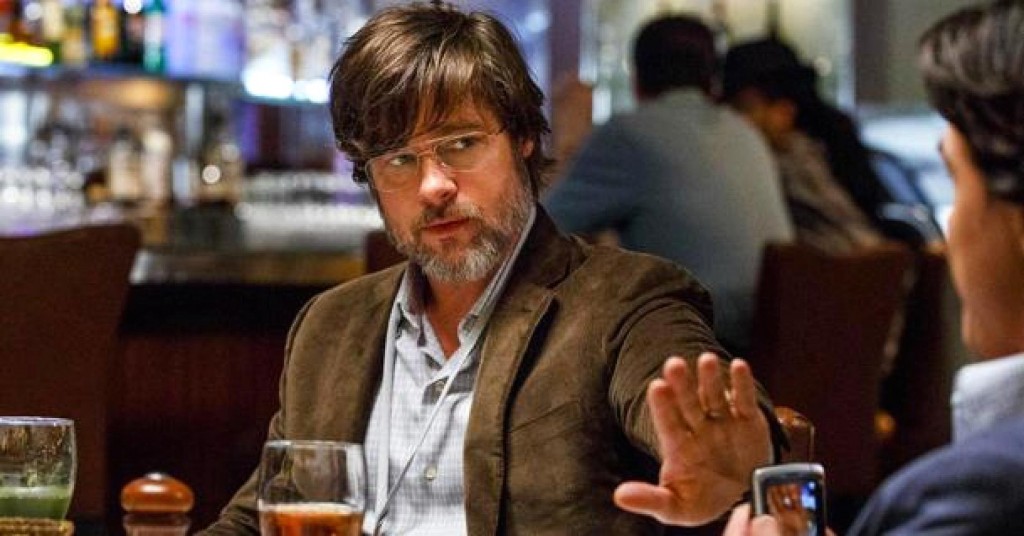 There’s no denying a person’s intrinsic proclivity towards scandals. The human nature longs for such interesting events in their life, and Hollywood generously obliges. The thrills and the visceral emotions take front seat and manage to flock audiences to theaters in swamps. The scandals range from political, to religious, to playing with people’s life. The general meaning of a scandal can’t be confined to a particular style. It exits in all shapes and forms, and has often to scratch up the hoi polloi’s reverie. Hollywood understands their propensity for scandalous reveals of their favorite people, and has encapsulated them in the form of motion pictures with unmatched grandeur. We decided to prepare a list of top movies based on real life scandals. You can watch some of these best real life scandal movies on Netflix, Hulu, or Amazon Prime.

The Scandal: Forcible taking of Philomena Lee’s son, and her subsequent exile.

A world-weary political journalist picks up the story of a woman’s search for her son, who was taken away from her decades ago after she became pregnant and was forced to live in a convent. ‘Philomena’ has something that is yearned for and lusted after by film-makers and journalists- a really good story. It is a powerful and heartfelt embodiment of motherly love for a child, and the undying beacon of friendship. Judi Dench shoulders the movie into a must-watch haven. A con man, Irving Rosenfeld, along with his seductive partner Sydney Prosser, is forced to work for a wild FBI agent, Richie DiMaso, who pushes them into a world of Jersey power-brokers and mafia. Endowed with perhaps the finest actors in the industry, and a director who isn’t hesitant to experiment, ‘American Hustle’ manages to present a glaring vestigial reality of the sham that changed the FBI forever. The retrograde style and the wigs work their charm on the audience like a serpent on a snake. The exuding sexiness and the sultry chemistry between the actors make the film a wholesome entertainment that you can not miss.

The Scandal: The lysine-price fixing conspiracy of the 1990’s.

This is indubitably Matt Damon’s best cinematic performance. Innocuous and benign on the surface- much like its protagonist- the film unravels itself in intricately crafted sub-plots which are bound to give you the chills. Though a bit drab and uninspiring in the middle, the movie manages to create and maintain a sarcastic tone, laden with full-on irony. The Scandal: A vivid and exhilarating expose of the corruption-submerged British Police.

When Francis Ford Coppola’s ‘The Godfather’ came out in 1972, many claimed with vehement confidence that Al Pacino couldn’t better himself. Their apparently prudent statements quickly turned dogmatic with the release of ‘Serpico’ the following year. Playing the cop-extraordinaire Peter Mass, Pacino successfully manages to camouflage in the role and skin of Mass with effortless charm. The scene where he uncuffs the perpetrator and goes on a walk with him, still remains one of the my favorite scenes from a motion picture. 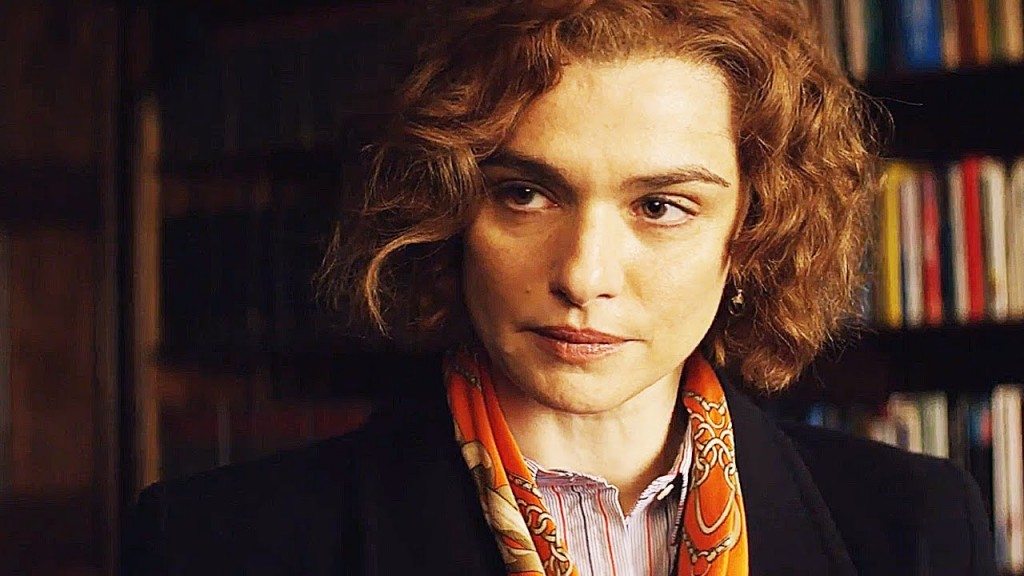 It still eludes my why Rachel Weiss missed out on an Academy nomination for her performance. She handles the taciturn and tormented Holocaust scholar with dexterity. The very well written movie is a ride of emotions, which take the front seat and disregard ratiocination. This visceral documentation of one of the most infamous trial cases the world has ever seen was a match in every footing with the original. Watch it for Rachel Weiss. 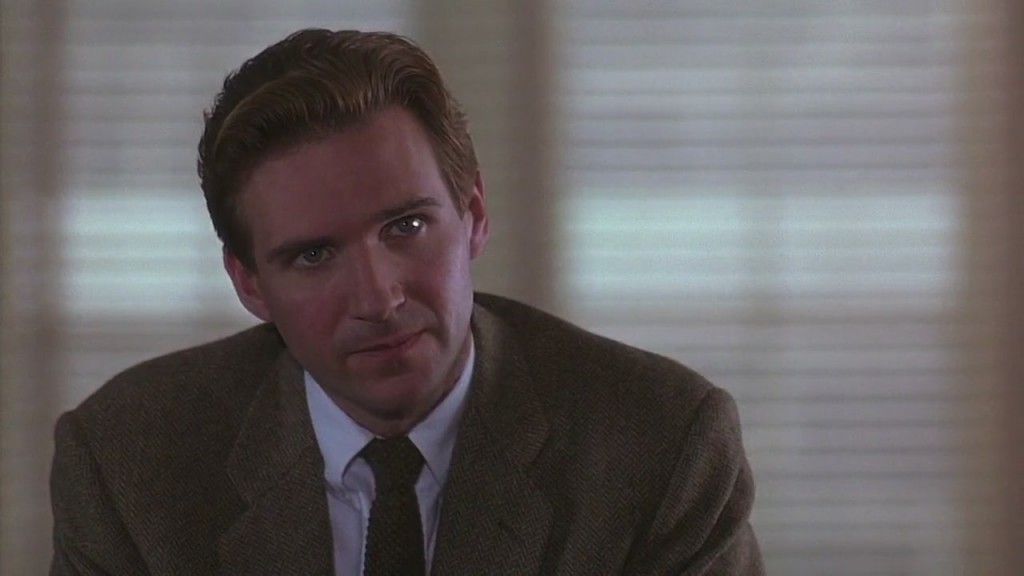 The Scandal:  The Twenty One quiz show scandals of the 1950s

Robert Redford is a revered commodity in the scandalous corridors of Hollywood. And this movie is one of the reasons. Chronicling the  the Twenty One quiz show scandals of the 1950s, the rise and fall of the popular contestant Charles Van Doren, the rigged loss of Herb Stempel, and Congressional investigator Richard Goodwin’s subsequent probe. Boasting a stellar cast comprising names like Ralph Fiennes, John Turturro, David Paymer, and even Martin Scorcese in a cameo, the film is a winner all the way through. It uncovers the dirty tricks and hoodwinks these scornful-scions use, masqueraded as popular and seemingly innocuous game of luck and wit.

The Scandal: The expose of Stephen Glass’ journalistic fraud

Journalism over the years has lost its tenuous grip on reality. It has become juxtaposed and exaggerated, rigged for your pleasure (sigh). Their focus on sensationalizing news and blowing things out of proportion has often culminated in stunning scandals. This movie traverses a young Stephen Glass’ metamorphosis into an experienced and influencing veteran, and divulges his unsavory ways to do so. This serious, and well-observed prognosis of the bludgeoning profession poses a difficult face of reality for the people to deal with. 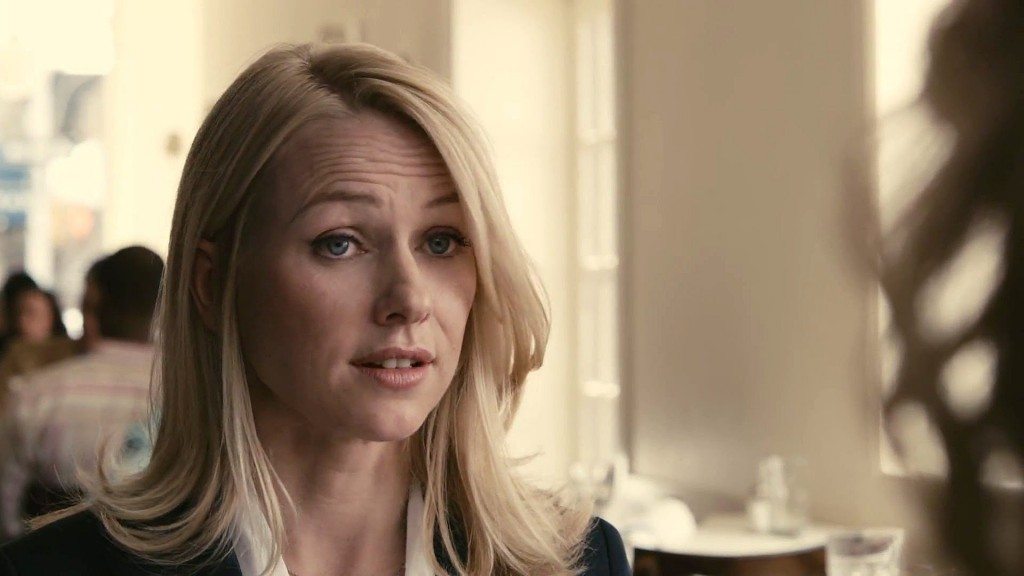 The Scandal: Valerie Plame’s betrayal by the White House, divulging her identity.

Valerie Plame, a CIA operative, investigates the existence of weapons of mass destruction in Iraq. Her cover is blown after her husband writes a controversial article about the sale of uranium. Naomi Watts and Sean Penn come together to tell a riveting tale of a troubled relationship between a husband and wife. The intricately weaved story, with mind-numbingly plot twists, grips the audience to the edge of their seats with suspense. The performances of the two leads shoulder the movie, and augments it in terms of realistic ground approach.

The Scandal: PG&E and its partisanship against its workers. 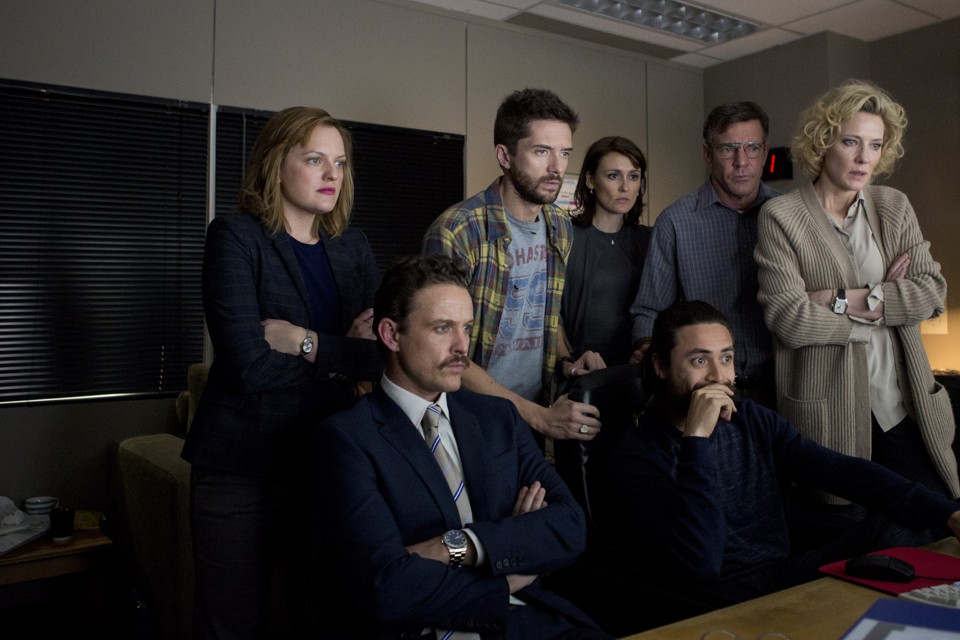 The Scandal: The Killian documents controversy.

This real-life inspired drama sent shockwaves through the USA when it first materialized. The sensational revelations of George Bush’s preferential treatment and the hollow mature of the veracity of his service in the air force had the nation watch the drama unfold like a hawk. Mary Mapes and her fight against the most powerful man in the world was a David and Goliath story. She found an able companion in Dan Rather, and the result was a heart-touching story of their everlasting bond and fight against the corrupt aristocracy. Cate Blanchett and Robert Redford do an amazing job.

The Scandal: Jeffrey Wigand’s sensational revelations of the workings of Brown&Williamson.

Jeffery Wigand, the former head of Brown & Williamson Tobacco Company, goes live on television to expose the bitter truth of how tobacco companies function. A fictionalized account of a true story, it is based on the 60 Minutes segment about Jeffrey Wigand, a whistleblower in the tobacco industry, covering the personal struggles of him and CBS producer Lowell Bergman as they defend his testimony against efforts to discredit and suppress it by CBS and Wigand’s former employer. Crowe deserved and Academy Award, with a career best, overshadowing a resilient Al Pacino who shined in his limited role. The Scandal: The housing bubble of 2009.

In 2008, Wall Street guru Michael Burry realizes that a number of subprime home loans are in danger of defaulting. Burry bets against the housing market by throwing more than $1 billion of his investors’ money into credit default swaps. His actions attract the attention of banker Jared Vennett (Ryan Gosling), hedge-fund specialist Mark Baum (Steve Carell) and other greedy opportunists. Together, these men make a fortune by taking full advantage of the impending economic collapse in America. The stars make the film worth it. It dumbs down the complexities and intricacies of the financial world, accessible even to a 10-year old. Don’t miss this one. Introduced to life in the fast lane through stockbroking, Jordan Belfort takes a hit after a Wall Street crash. He teams up with Donnie Azoff, cheating his way to the top as his relationships slide. This peek into the every day life of Belfort and his notorious recreational ways are sensually orgasmic. The breaking of the fourth wall paves the way for relativity and accessibility to the audience. Expertly shot by the mercurial Scorcese, and brilliantly acted, especially DiCaprio, this is one hell of a movie. 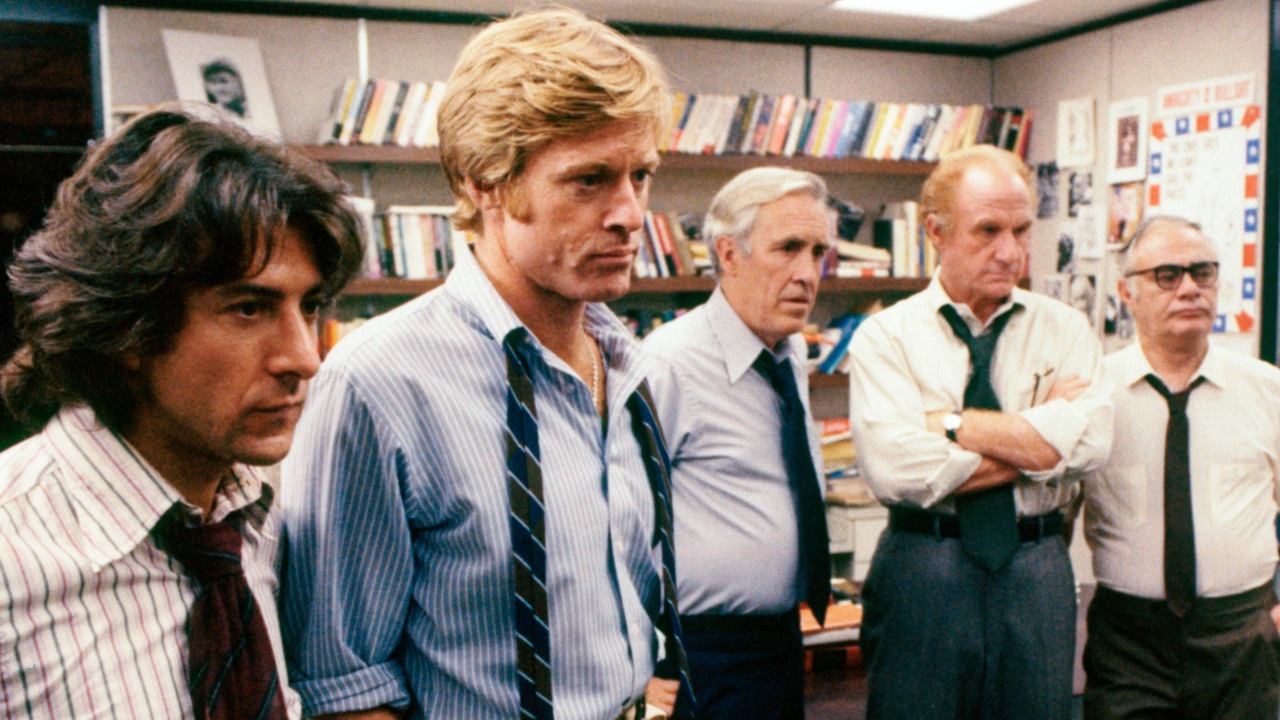 The Scandal: The Watergate scandal relating to Richard Nixon.

During the 1972 elections, reporter Bob Woodward covers what seems to be a minor break-in at the Democratic Party National headquarters. Certain lawyers, names and addresses make him suspicious. What follows next shook the entire world and culminated in the first president of the United States resigning from his office. The celestial ensemble, the exhilarating performances, and the in-depth presentation of the subject matter make this a must watch. 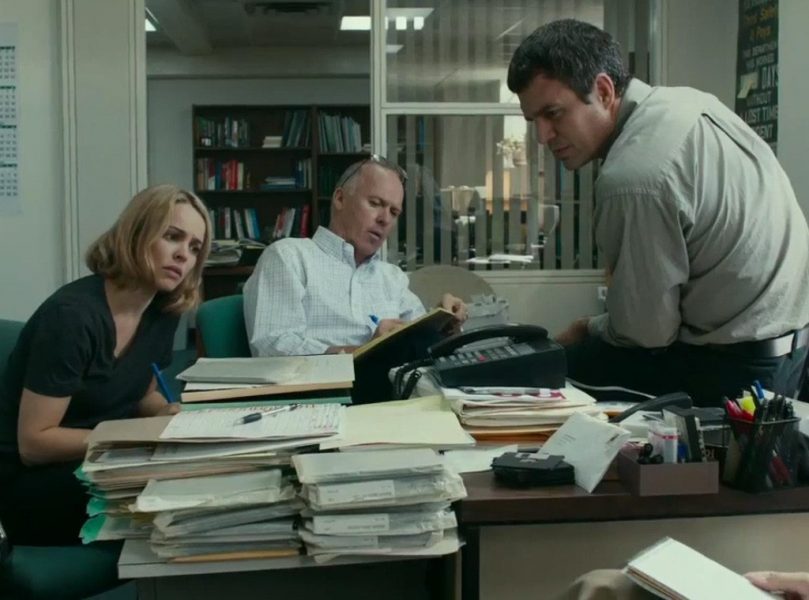 The Scandal: The Boston archdioceses scandal.

There have been very few movies since ‘Schindler’s List’ which have moved me the way ‘Spotlight’ did. It tells the tale of The Boston Globes’ investigation team Spotlight, and their subsequent inquiry into cases of widespread and systemic child sex abuse in the Boston area by Roman Catholic priests. The heavily expounded and researched subject matter coupled with the intricate story line make for a compelling watch. The movie went on to win the Best Picture Oscar as well, making it a critical success. Words don’t do justice the evocative and provocative performances the film features by its lead cast, including names like Michael Keaton, Mark Ruffalo, Rachel McAdams, Stanley Tucci and John Slattery. Do watch this one!