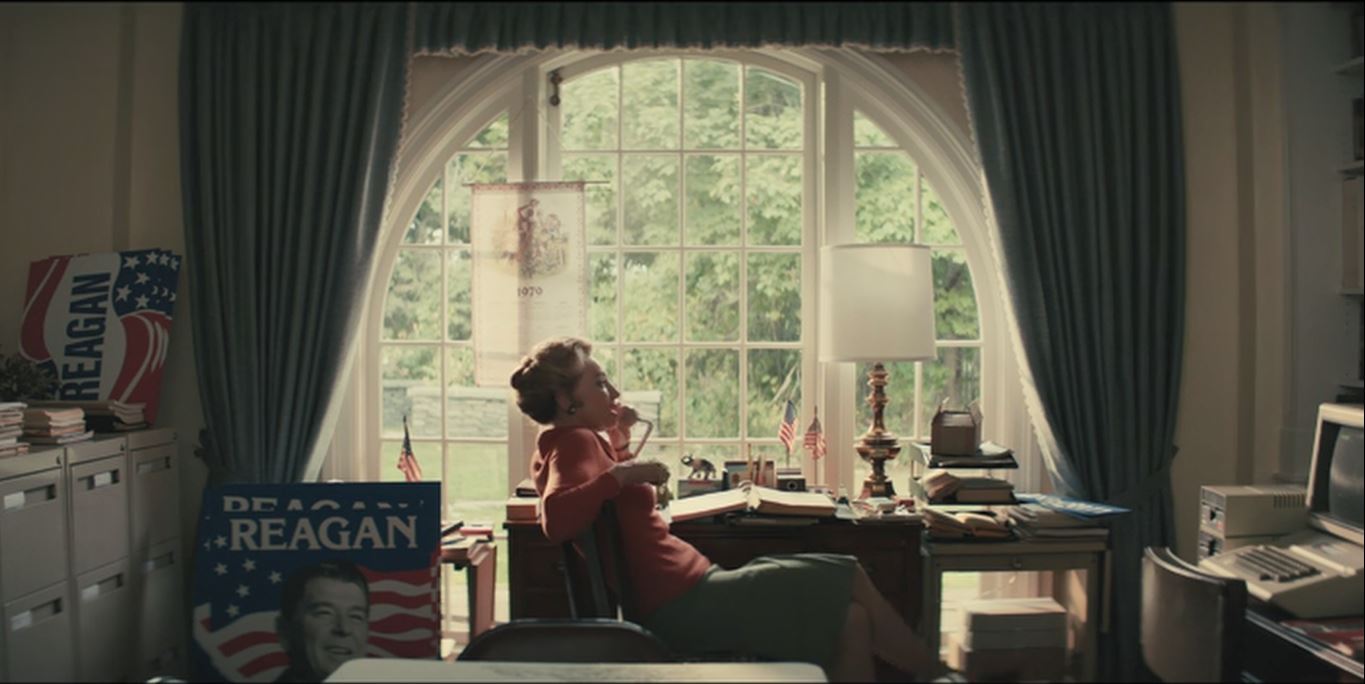 ‘Mrs. America‘ is a Hulu miniseries that tracks the true story of the fight to get the Equal Rights Amendment (ERA) ratified. The show fixes its focus on Phyllis Schlafly, a conservative woman who successfully manages to oppose the ratification. By doing so, the Hulu series manages to present a comprehensive look at the politics of the era. Most of the episodes of the series revolve around an actual person who played a notable part in the fight. The final episode, titled ‘Reagan’ does not revolve around Ronald Reagan but takes a look at the effect of his presidential election victory on the feminist movement.

The final episode of ‘Mrs. America’ sees the Eagle Forum women make preparations for a gala. Alice comes to help, and the other women remark how they haven’t seen much of her for some time. Outside, Rosemary questions Alice’s loyalty to Schlafly. On the other hand, the NOW women try to prepare for a meeting with President Carter. However, since they only have fifteen minutes with him, Abzug makes some calls to get more time. They get two hours with the President.

At the Stop ERA gala, Schlafly gives a speech about the end of E.R.A. Alice gets drunk and tells Schlafly that she gave Pamela wrong advice. However, before it turns into a commotion, the attendees are evacuated due to a bomb threat. After that, a few of Ronald Regan’s men try to persuade Schlalfly to support him in the upcoming election. Against Fred’s wishes, she extends her support to Reagan, promising to give him her mailing list. Schlafly is hoping for a cabinet position. Abzug gets fired by Carter. In response, Gloria, Jill, Carmen, and several other women resign as well. Meanwhile, Alice gives Phyllis’ daughter a lift. When Phyllis goes outside to thank her, Alice tells her that she has gotten a new job and feels empowered by it.

It is 1980: Reagan wins the election. Reagan calls Schlafly and tells her that he cannot provide her with a cabinet position as he does not want to upset the pro-ERA women. Upset, Schlafly prepares dinner.

Actual footage of Schlafly, Steinem, Abzug, Chisholm, Betty, Jill, and the other women is depicted. In the end, some information is presented as text: Reagan appoints a pro-ERA, anti-communist woman, Jeane Kirkpatrick as the first ambassador to the U.N. Phyllis spends the remainder of her days writing books and being involved in family value politics. Her last book, ‘The Conservative Case for Trump,’ is published a day after her death.  Leaders of the women’s movement never reach the kind of influence that they enjoyed in the 70s. E.R.A. is stopped three states short. Nevada ratifies it in 2017, Illinois does so in 2018 while Virginia follows suit in 2020. A Democrat-controlled House passes a resolution to rescind the deadline for E.R.A. ratification while a Republican-controlled Senate indicates that it is highly unlikely to take up the measure.

The final episode of ‘Mrs. America’ ends on a powerful note. However, at times, the episode does feel like a slightly dragged-on aftermath episode. On a few occasions, the finale does feel like it is attempting to tell an end to each character’s journey, rather than show it. However, there are enough powerful moments to keep the episode from being unengaging.

For instance, the scene involving Gloria and others handing in their resignations is portrayed powerfully. Moreover, Alice’s character arc also ends up receiving a rather impactful end. With the previous episode and this one, Alice’s character assumes a measure of importance that she hasn’t in the other episodes of the series. It certainly gives the impression that the fight for the ERA is not one that is reserved for famous women like Steinem or Schlafly but is one for each and every woman, for each and every person.

Next, Reagan’s election victory is handled quite maturely as well. This proves to be a final ode to how well the series has depicted the political climate of the 70s. Schlafly’s politicizing is apparent to see, and so is her disappointment and rage at not being given a cabinet position. The episode leaves one feeling sorry for both sides of the women’s movement (the conservative one, led by Schlafly and the liberal side) for being enmeshed in Washington politics. The reference at the end to the 1975 movie, ‘Jeanne Dielman, 23 Commerce Quay, 1080 Brussels,’ is one of the most powerful allusions I have witnessed in recent years. In a nutshell, while the finale is not perfect, it manages to nail the essence and core message of ‘Mrs. America’ in viewers’ minds: a message which feels timely and one which is sure to stay for a long time.