Directed by Estevan Oriol himself, ‘LA Originals‘ is an instance where the director turns the camera towards one’s own achievements. In this case, it is not just Oriol being examined, but his good friend and business partner, Mr. Cartoon, or Mark Machado, as well.  Without sounding too self-aggrandizing, Oriol walks the fine line where we are introduced to different people in their lives. Most of them are celebrities. We have the who’s who of hip hop, and the sports world, speaking for the creative duo. However, the testimonials aside, Oriol also gives us exclusive access to the LA street culture that inspired the duo and shaped their lives.

If you love hip hop, especially the West Coast scene, ‘LA Originals’ is a trip down memory lane, to when the real old school rap was coming out of places like South Central. Read our review of the documentary here. 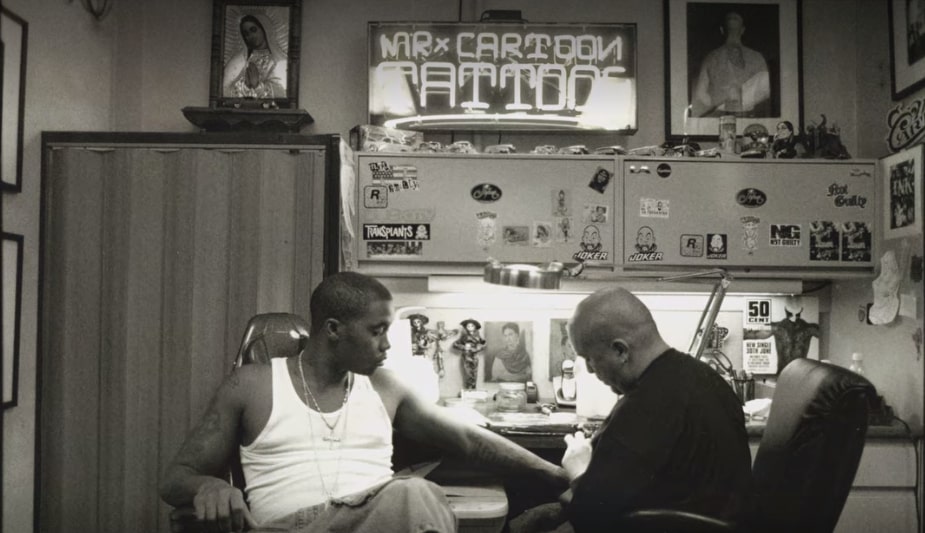 In 1992, the Hollywood Athletic Club witnessed the Penthouse Players record release party. Two lowriders went to the party and were introduced to each other since they were the only two Chicanos there. Estevan met Cartoon for the first time, and history was made. Of course, we trace how both of them developed their skills. Cartoon, who got his name for being animated in school, developed his art style from graffiti to tattooing. Estevan, from being a tour manager, went to photographing iconic moments for groups like Cypress Hill. More importantly, both of them were drawn to the lowrider culture, loved living in the moment, and were determined to make a name for themselves.

‘LA Originals’ does not just paint these two men as artists. They are flaneurs. However, the ability to roam the dangerous neighborhoods of Los Angeles springs from Oriol and Cartoon’s Chicano identity. With their art gaining them access to the upper echelons of society, the duo never forgets their street roots. Thus, they can hang out at skid row, and then head to a five-star restaurant.

The documentary is interspersed with a lot of personal accounts from the likes of Snoop Dogg and Eminem. There is some footage from 50 Cent, Dr. Dre, and Nas. Along with that, we see a lot of candid photos and music from some of Oriol and Cartoon’s clients. It helps tie the aesthetic of the documentary, and their Chicano art, to hip hop itself. Featuring songs like Mobb Deep’s “Shook Ones, Part II,” helps trace the birth of Oriol and Cartoon’s aesthetic at the intersection of a life of drugs, gang violence, rap music, and lowrider culture. The gritty and grainy quality that has defined and helped shape the history of rap is a common ground which has also allowed the duo’s artwork to flourish.

Oriol expertly traces how the lowrider and LA street culture went from being a niche subculture to entering the mainstream, all over the world. In a classic moment of the capital subsuming a fringe icon, we see how Oriol’s iconic LA hands image makes its way to H&M and even Starbucks. You can check out the image below.

However, the point of ‘LA Originals’ is not to crib about tattoo culture, or the street culture becoming mainstream. With artists like Banksy being turned into celebrities, we have come to champion counterculture even in the art world. On that note, Oriol’s documentary shines a light on the hardships they face, while telling us how they’ve been countercultural in their aesthetic from the start.

As for the documentary itself, ‘LA Originals’ might come across a little self-serving. However, with the artwork being catapulted into the spotlight, it is only fair that the artists deserve due recognition. Moreover, contemporary Chicano art in LA requires representation, and that is what Oriol and Cartoon give us, in ‘LA Originals.’

It might not be the most incisive, but it feels authentic in its message. At a time of hatred in America, especially towards Mexican communities, Chicano art becomes a symbol of resistance. It is a voice for the LA community, and we have just seen how much love and support the artists enjoy. If you are fascinated by LA’s street history and gang culture, if hip hop is your groove, then you shouldn’t miss out on ‘LA Originals.’