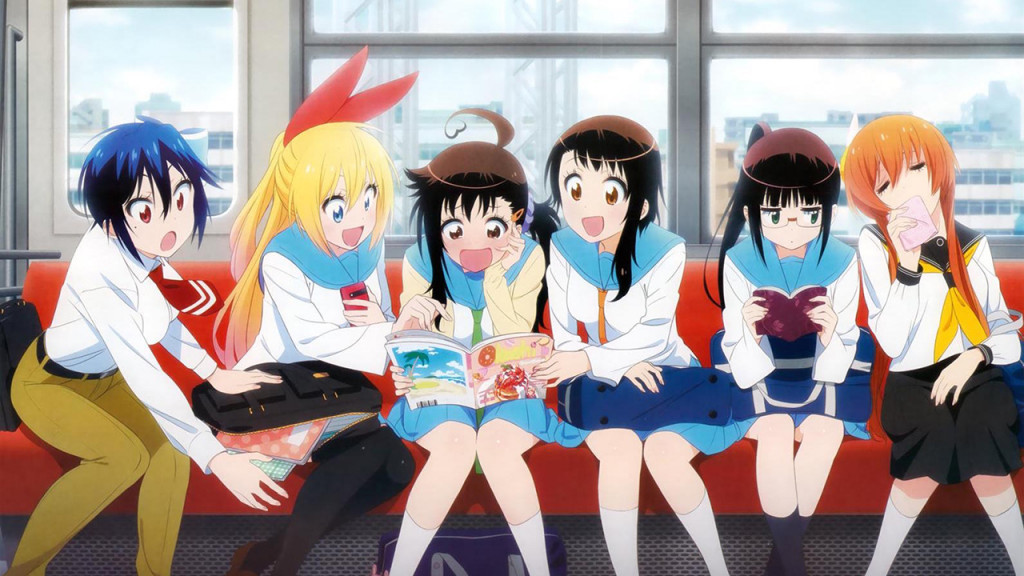 The ones who are familiar with Nisekoi will know that it is driven by no meaningful plot, but that’s okay because we love this comedy-drama just the way it is. Now since the first season of ‘Nisekoi‘ is like most other popular comedy anime, a follow-up season for it must have been a challenge for the creators. It can either have the same old plot continued in the second season and risk stagnation, or it can unwind everything and give the show a fresh start, which could possibly lead to complete alienation. The second season tries to set a common ground between both of these and gives us elements of the last season along with some refreshingly new content.

New characters are introduced to the already existing cast of the anime who add a little more humor to it but fail to add any extra value to the plot. Season 2 keeps everything short, crisp and to the point but it still fails to match up with what the first one offers. But leaving that aside, this season still has some lovely admirable characters and there are also a few heart touching moments here and there. Most anime created by Shaft Studios tend to have some unconventional yet attractive camerawork combined with unique detailed artwork and ‘Nisekoi‘ is no different. The characters of the manga have been brought to life in the best possible way and it’s hard to imagine any other studio doing a better job than this.

The second season could’ve done better if only it had a few more episodes just like the first one. It’s unfair to see that a popular anime like this one weighing down on its episodes with each season just to invest more in its animation. The great animation works well and is surely is a feast to the viewer’s eyes but the plot could have had a little more to it with just a few more episodes of character build up.

If you are romcom fan and enjoy watching the ones that belong to the harem genre, then ‘Nisekoi’ is surely one of the best options out there for you. Not to mention, its high production value and colorful diverse characters make it very entertaining to watch. But overall, it does suffer from some pitfalls because of its lack of base and progress, which makes it nothing but a feel-good time killer. And to be rated high enough, an anime has to have a little more than that. It’s not just the plot that’s an issue but there are other aspects to it as well. In spite of being a comedy, anime like ‘Blue Exorcist’ do really well overall and remain memorable for a very long time. ‘Nisekoi’, on the other hand, is great but its lack of real substance lets it down in the bigger picture.

‘Nisekoi’ Season 2 premiered on April 10, 2015, and ran all the way up till June 26, 2015. Season two has a total of 12 episodes and each episode has a runtime of 24 minutes. As far as the next season is concerned, you can get the full details about Nisekoi Season 3 right here.

The protagonist is a guy named Ichigo who promises a childhood love that if they ever meet again in the future, they will get married for sure. But he soon forgets about it and now there are three other potential marriage candidates for him named Kirisaki Chitoge, Onodera Kosaki, and Tachibana Marika. All three of them hold the key to the locket he wears around his neck all the time. Ten years later, all these characters end up in the same classroom and because of a recent turn of events, Ichijou and Kirisaki are forced to fake a relationship. They do this to stop their rival family gangs from slaughtering each other and that’s how the title ‘False Love’ of this season comes into picture.

In season two, Ichijou and Kirisaki continue their fake love story and Ichigo starts falling for Kirisaki. Later, even Kirisaki starts seeing Ichigo’s better side and develops new feelings for him. But while all this is happening, another girl enters the show and is obviously another one of Ichijou’s admirers. The competition for Yakuza’s heir’s attention has never been so intense and now only time will tell which one of them is truly worthy of Raku’s love.

Season 2 has some great hilarious harem moments but the writing seems to be a little lazy in this season where no further development has been made. Only a few new characters that have been introduced to the show add a little more to the story and this, too, seems a little forced at places. It’s almost like the creators of this anime had nothing more to add to it so they just went ahead to place more characters here and there. Season 1 also had an epic ending that was full of drama and emotions but nothing like that happens here. It’s good to see a character like Rako, who does not let the love-hate relationship of admirers affect him at all. They express their adulation towards him in the weirdest ways but he still stays humble all the time. In the end, ‘Nisekoi’ manages to add a bit of realism to it.

However, the problem is that all of the show’s concepts and ideas felt fresh and new in the first season and thus led to its popularity. Now it just feels stale with the same things repeating over and over again. Everything else in the anime is great but it is only a matter of time before fans get bored with this plot that only seems to be spinning in circles and leading back to the start. The only way this anime can revive itself is by adding something more interesting to the story of the next season, or it will simply lose the charm it had on its viewers in the first season.

According to the manga, the second season is not supposed to be about the pendant and Raku’s relationships. It should have been about how Onodera’s sister, Haru, holds a very bad impression about Raku and tries to bring him down by spreading rumors about him. The second season of the anime does catch up to this story in the first half and only halfway through the season in the 7th episode, it seems to reach the source material. Till then, it’s all the same draggy stuff from the first season and honestly, even if you miss the whole first half of this season, you will miss nothing at all. The story is one element that has single-handedly brought this season down. There is zero progress and instead of watching this, you might as well just watch paint dry out on a wall.

There is no doubt that the characters of the anime are lovable and full of color. But the lack of progress in the story reflects on their development and the characters that we see now in the second season are the same as the ones in the first. We cannot really blame the anime for this because it’s just trying to follow the manga. But instead of using the first half of the second season as a mere filler, something more could’ve been made out of it to have some progressive characters by the end.

The art and the animation are the only two things that help you get through this season and the credit for this goes to Shaft Studios. Their unique animations styles have never failed to impress and even here in ‘Nisekoi’, we get to see some amazing unforgettable visuals. This is one department where we do not expect the show to improve because it is already close to perfect. Hopefully, the animation will remain the same for the upcoming seasons along with more improvement in other aspects. There’s also some fan service here and there wherein some characters either appear in bathing suits or completely naked. For a harem show, it has managed to keep it moderate and does not overdo it in any way. So the sugar in the dessert remains enough to keep it sweet and simple. The voice acting sounds a little off at times but the opening and closing tracks are wonderful and make you want to listen to them again and again.

Overall, season 2 of ‘Nisekoi’ fails to put much on the table and relies heavily on just teasing the audience with the unusual pairing of characters. All this was fun in the first season but the patience of all the viewers is running really thin now. When it comes to comedy and animation, ‘Nisekoi’ still lives up to its expectation and hopefully, these aspects of the show will remain unchanged in the future. But if no major changes to the story are made soon, it will surely end up losing a large chunk of its fan following. Diehard fans of the show are still not complaining and love the anime for the comedy and entertainment that it offers. It is clear, though, that it does have great potential to grow and revive itself in the next season. For that, it will have to be a lot more than just a “fan pleaser” and even deviate from the manga a little.

The English dubbed version of ‘Nisekoi’ Season 2 can be found on Crunchyroll and Hulu. Those who prefer the original versions of the show also have the option of watching it with subtitles on the websites mentioned above.