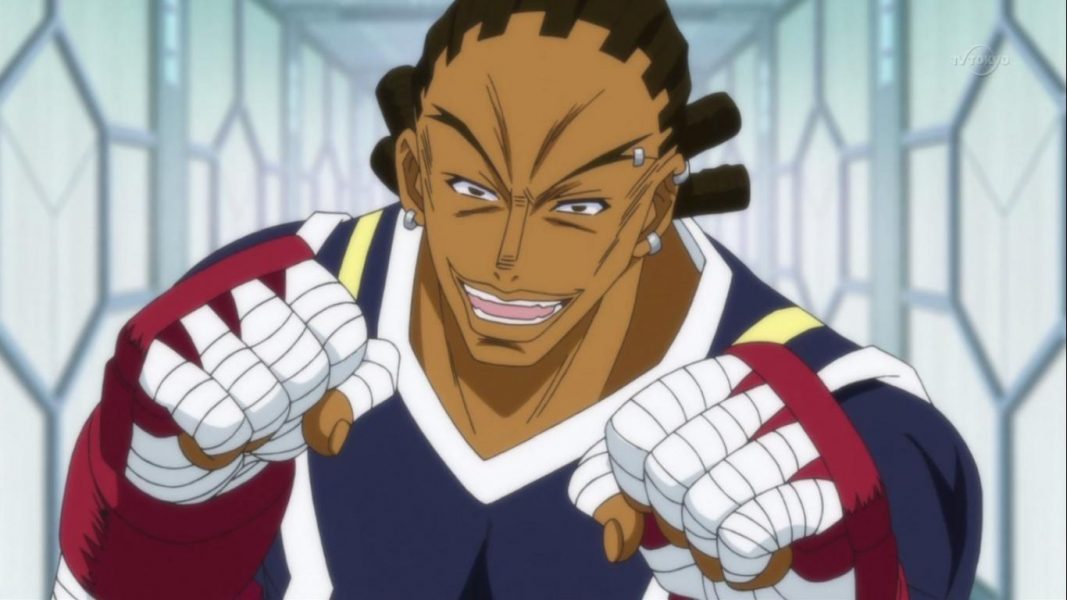 Well, since anime mostly deals with Japanese characters and cultures, it is very unlikely that one thinks of a black character when asked about anime. But anime has been including characters from all over the world to keep its character work dynamic and fresh. They have been able to portray some really nice black characters in their series and movies. Here, is the list of  top African American anime characters ever. Who is your favorite? 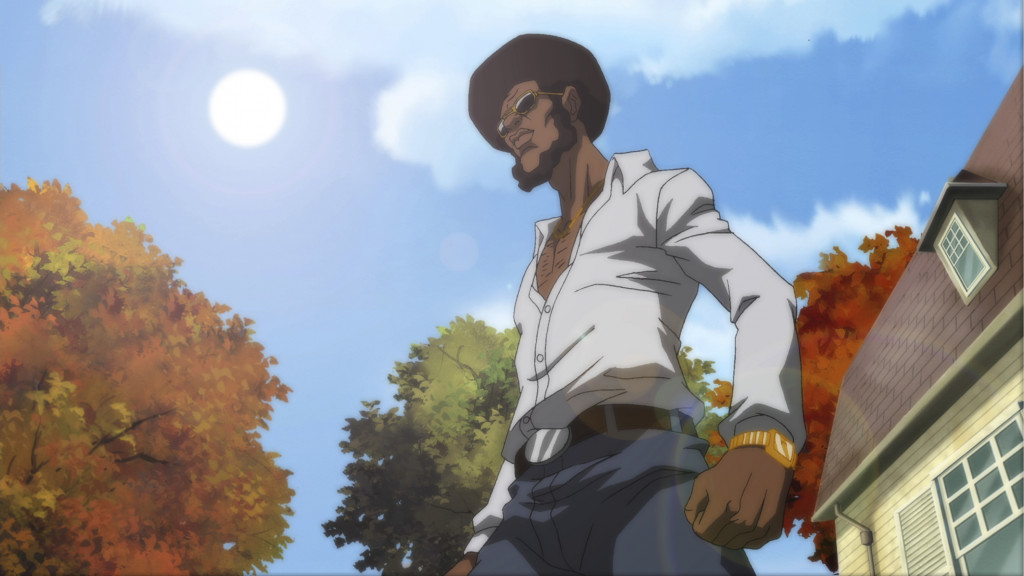 Grandmaster Bushido Brown is one of the coolest characters from the anime series ‘The Boondocks’. He is a skilled martial artist who used his talents for earning money by being the bodyguard of rich clients. Though being one of the best martial artists, Brown did not care about any code of honor or martial arts discipline. He just wanted to use his skills for money. He always wanted to feel superior and used to participate in tournaments just to dominate others. Bushido has an afro and a thick beard with no mustache. 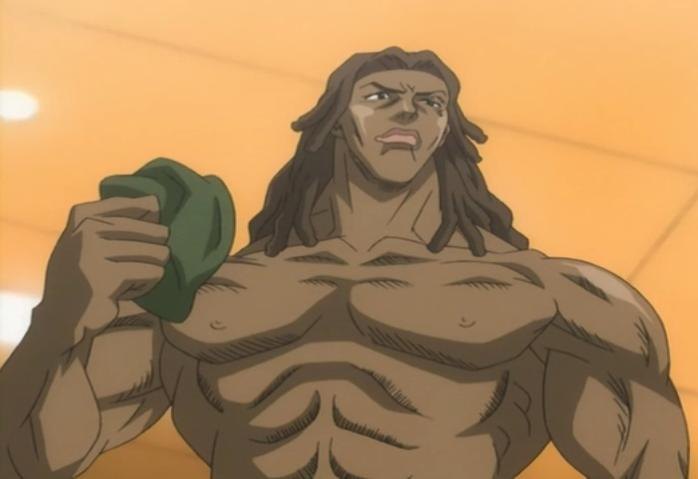 Bob Makihara is a black character from the anime series ‘Tenjou Tenge’. He was affiliated to Knuckle Bombs and Junken Club. Bob is one of the strongest guys in the series. He has a huge muscular built. Bob keeps his hair in long dreads and has blue colored eyes. He is highly skilled in martial arts and loves fighting. He is trained in the Brazilian martial arts known as Capoeira. It is a form of martial arts created by the slaves and they disguised it as dancing to not get caught. Bob has the ability to start feeling vibrations through the ground which enables him to predict the opponent’s movements. 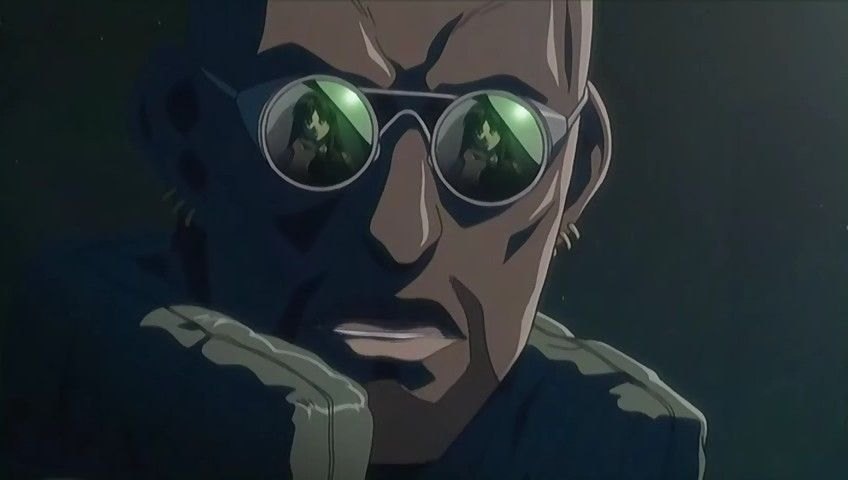 Dutch is one of the most badass characters in the action genre anime series ‘Black Lagoon’. He hails from the United States and used to be a marine who served in Nam. After the war was over he left and decided to go to Thailand where he started working as a mercenary. He founded The Lagoon Company. He is completely bald and has a cool looking beard. Dutch is mostly seen wearing sunglasses and is rarely seen without them. His preferred weapon of choice is a magnum and a shotgun. 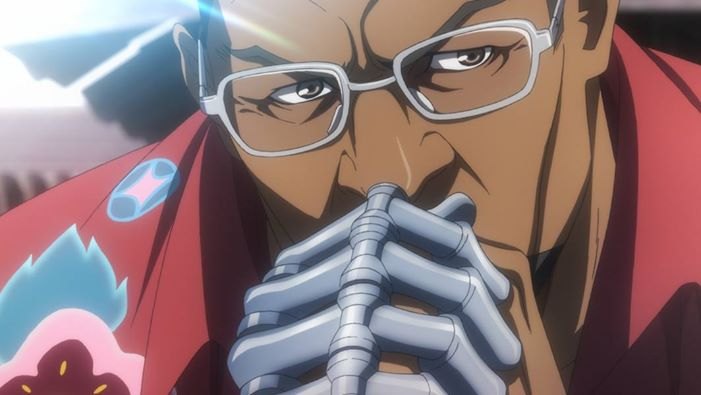 Desmond Rutaganda is the leader of the mercenary group that appears in the anime series ‘Psycho-Pass’. He is mostly shown as cold having a stern expression on his face. He has a cybernetic left leg and right hand. Desmond has huge interests in books and loves reading paper-based books. He has a great spot to conceal his dagger. It is in his left artificial leg. He is quite a good shooter which is a skill his opponents fear. He also knows wrestling. 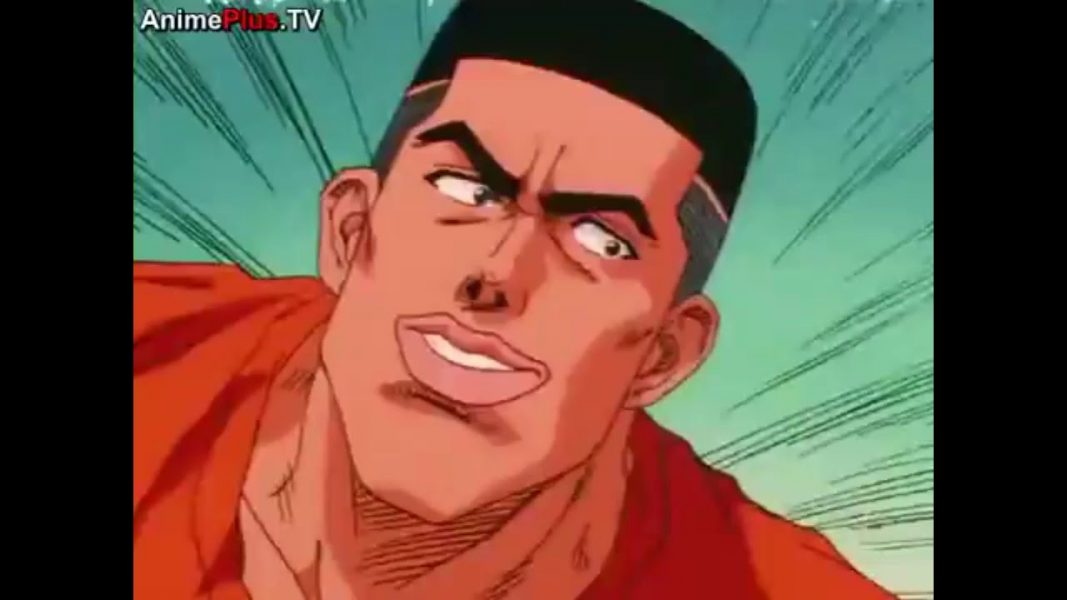 As is obvious the from the name ‘Slam Dunk’ is a sports genre anime. The sports name is also quite obvious. It’s Basketball. Takenori Akagi is one of the important characters of this anime series. He is affiliated to the Shohoku basketball team and is the captain of his team. Takenori is highly skilled in the sport. He is quite strict and disciplined and takes the responsibility of his team quite nicely. But Takenori doesn’t just leave it all to sports. He is quite good at his academics too as he studies a lot. His teammates respect him a lot. 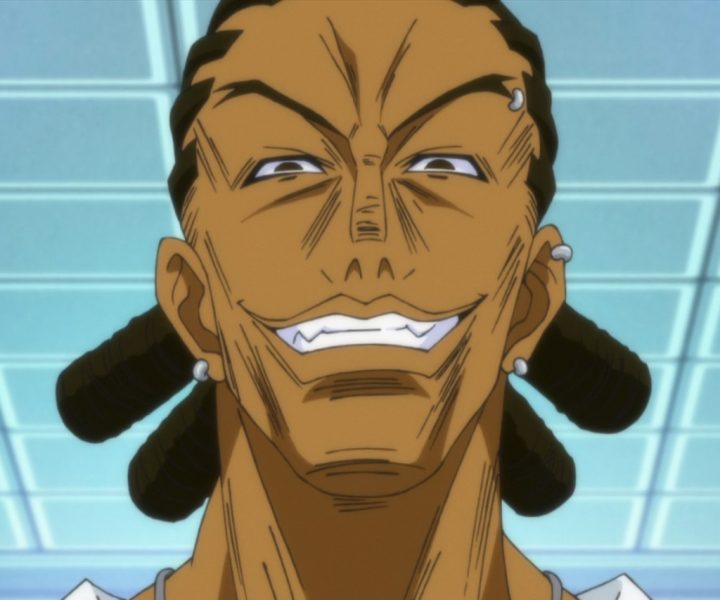 Well, black characters in anime often tend to be quite powerful and as you have gathered from this compilation, all of the entries have been someone who has quite the physical prowess. This entry is no different Shigusa Takachiho is one of the characters from the anime series ‘Medaka Box’. The series deals with a girl named Medaka who is beautiful and intelligent. She wants to please everyone in her school and on becoming the school president she decides to keep a suggestion box to fulfill the needs of the students. Shigusa Takachiho is quite powerful and has high reflexes making him literally untouchable. Despite his physical abilities Shigusa never uses his power for illegal purposes and actually wants to become a researcher, often seen in his lab coat. 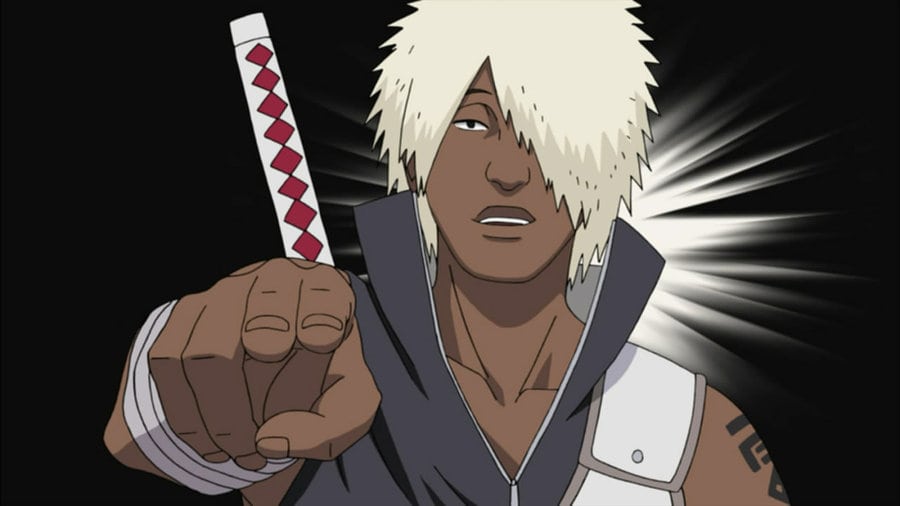 Darui is a highly skilled ninja from the popular ninja-themed action genre anime series ‘Naruto: Shippuden’. He belongs to the village of the hidden cloud. Darui possesses a unique Kekkei Genkai which allows him to perform a very powerful jutsu known as Storm Release. He has white colored hair and carries a huge sword. He has an easy going personality and would love to not do any difficult things. Darui is trusted by the Raikage a lot and has proved his worth several times. He played a staple role in the Fourth Great Shinobi War. 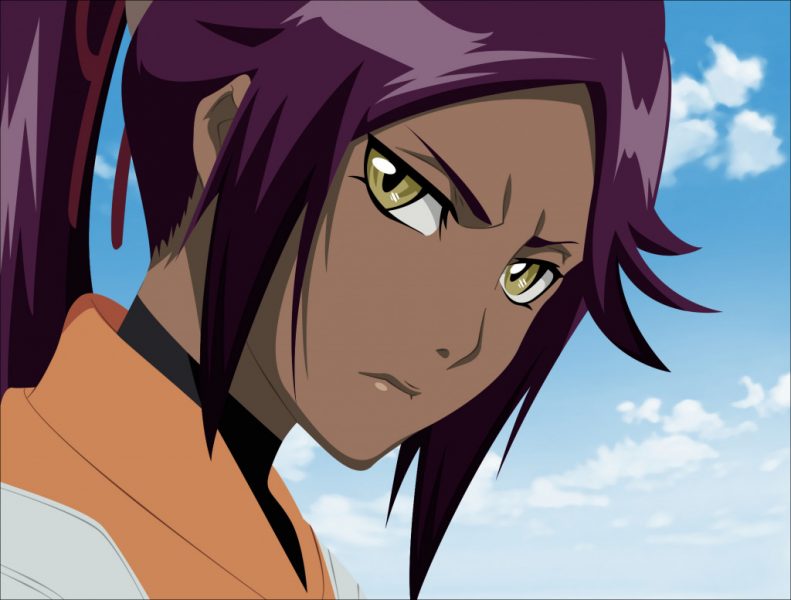 Yoruichi Shihōin is a staple character from the anime series ‘Bleach’. She can transform herself into a cat which is quite useful to spy on others. Yoruichi is a highly skilled shinigami and used to be the captain of the 2nd Squad in the Soul Society. She is one of the hottest black female characters I have come across in anime. In addition to that, she can clearly kick ass. She trained Ichigo so that he could achieve his Bankai. Yoruichi is mostly seen as being calm, easy-going and playful often teasing others but when the situation demands it, she can completely changer persona to someone serious, experienced and mature. 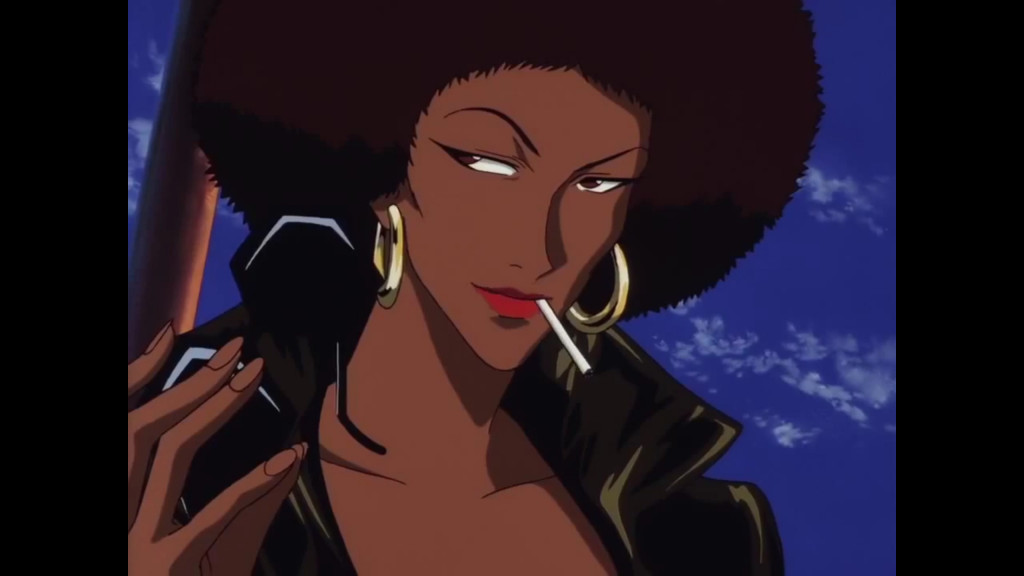 Before I get to the character let me say this again like I have said this in many of my compilations, if you haven’t watched ‘Cowboy Bebop’ yet then please do so. It is one of the prime examples which can understand why anime is so unique and popular. The character of Coffee appeared in one episode of ‘Cowboy Bebop’. Then why are you including someone who just appeared in one episode, you ask? Well, the answer is she was quite an accurate representation of the Black female. Her style was that of retro 70s and her tight body suit made her look hot. She looks more like a real-life character than someone from anime. Being quite a good representation of a black person Coffee makes this list. 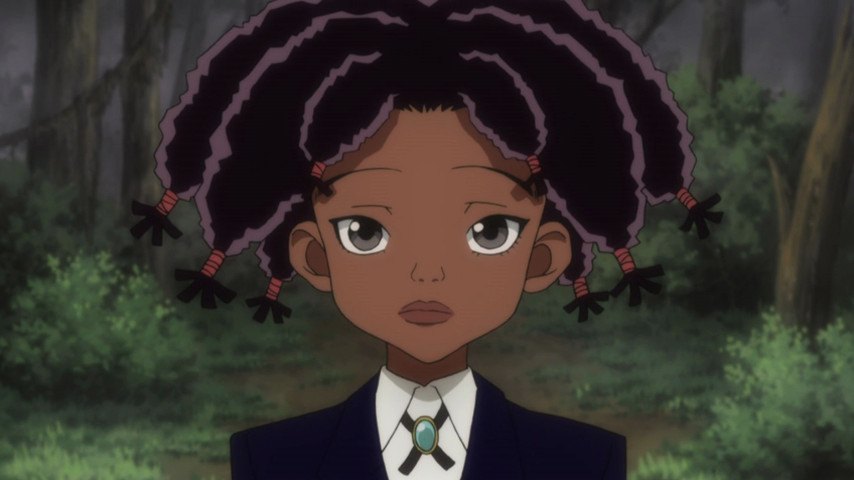 Canaria or Canary is a black character that appears in the action, adventure genre anime series ‘Hunter x Hunter’. She works as an apprentice butler of the Zoldyck Family. She is quite strong and highly capable in combat. We can understand this fact when she completely decimated Gon when he was trying to enter the Zoldyck castle (I know Gon wasn’t trying to defend himself but still we can understand her power). She is mostly seen wearing her butler uniform which consists of a black suit. Her hair may be considered an afro but is tied in various tails (I kinda dig that hairstyle). Canary is extremely loyal to Killua to the extent that she can sacrifice her life for him. 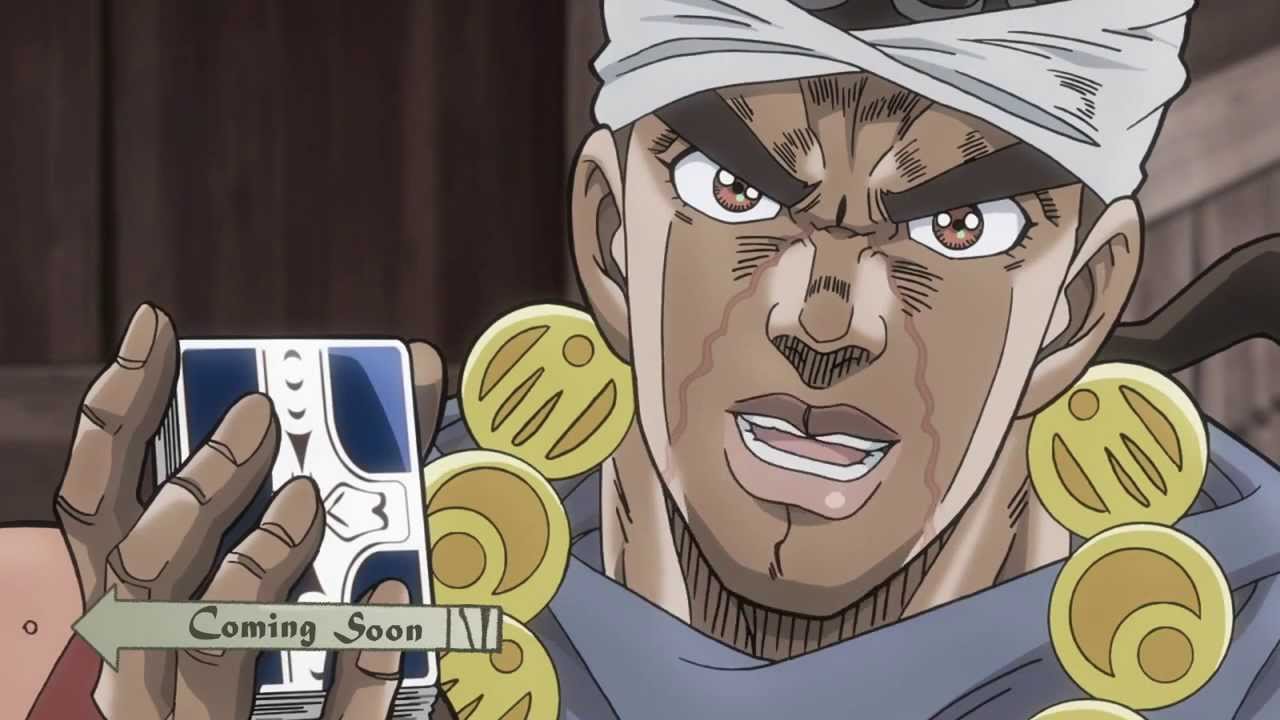 Up next is the black Egyptian Muhammad Avdol from the anime series ‘Jojo no Kimyou na Bouken’. He is a friend of Joseph Joestar. The group which wanted to defeat DIO encounters him. On knowing he is a friend of Joe’s they let him join the group. Muhammad is quite a knowledgeable person. He can be seen sharing his wisdom and knowledge of his culture and the surroundings with the group and also providing them with insights whenever needed. He has a muscular physique and is quite strong too. Avdol has the ability to use a Stand. His Stand has the ability to manipulate fire. He wears a headband. 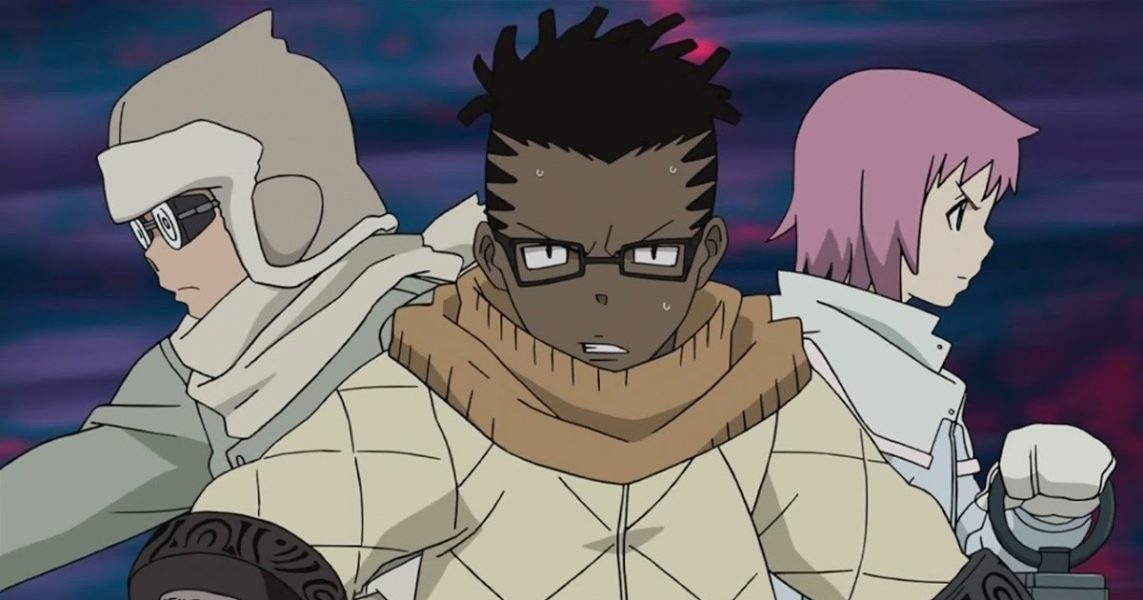 Kilik Rung is a meister from the fantasy, action genre anime series ‘Soul Eater’. He is a black character and is one of the coolest characters in the series. He is quite powerful and highly skilled being one of the top 3 meisters in the Death Weapon Meister Academy. Kilik wields two death weapons being the meister of both Fire and Thunder. He is just 13 years old and has one of the coolest looking hair in the series. I mean, just look at it. He doesn’t have an uptight personality and kinda has a laidback sort of attitude. Kilik is often seen wearing short-sleeved shirts and gray colored pants.