Only Murders in the Building Episode 6 Recap and Ending, Explained

‘Only Murders in the Building’ is more than halfway through its first season, and the sixth episode of the quirky comedy focuses on the main characters’ emotional conflicts and explores what the podcast means to them. That’s not to say the mystery of Tim Kono’s death is sidelined. As Charles and Oliver find out more about Mabel’s past, certain previously known details about Tim also surface.

The episode ends with a surprising character becoming a prime suspect in the trio’s investigation. If you need some clarification about this person’s identity and the other clues that Charles, Oliver, and Mabel receive, here’s everything you need to know about the ending of ‘Only Murders in the Building’ Episode 6! SPOILERS AHEAD!

Only Murders in the Building Episode 6 Recap

Episode 6, titled ‘To Protect and Serve,’ opens with Detective Williams, the officer in charge of investigating Tim’s death returning home. Her wife is listening to the podcast about Tim’s death and believes he was murdered. Meanwhile, Tavo tells Mabel, Oscar, Charles, and Oliver about a specific jewelry item that Tim was looking for. Mabel’s mom arrives at Tavo’s tattoo shop.

Following the reveal of Mabel’s connection to Tim, she discloses her tragic story to Charles and Oliver over dinner. They learn of Zoe’s death, and Mabel walks out after her mother tries to persuade her to stop investigating. Charles and Oliver return to the Arconia and get a call from their sponsor, Teddy Dimas.

Back at her home, Mabel and Oscar reminisce about their past and see a picture of Zoe. They realize the piece of jewelry that Tim was looking for was with Zoe the day she died. However, Oscar remembers that the ring was missing when he saw Zoe’s dead body. Teddy reveals to Charles and Oliver that Jimmy Fallon spoke about their podcast on his show.

Enthusiastic about the podcast’s potential and thrilled by its promotional benefits, Teddy writes a check to Charles and Oliver for subsequent episodes. They explain that they will no longer continue the podcast without Mabel, but Teddy insists they take the money. Mabel convinces her mom that she must figure out what happened to Tim. Mabel apologizes to Charles and Oliver for lying to them, and the trio decides to continue their investigation.

Only Murders in the Building Episode 6 Ending: What Is Inside the Package?

Near the episode’s end, Detective Williams realizes that she missed a few details in Tim’s death and decides to look into the matter. She learns that the toxicology reports from Tim’s crime scene were never submitted, and his phone never made it into the IT department. The missing evidence is enough proof for the detective to believe that something fishy is going on. However, given the possibility that her superiors are involved in hiding the evidence and the complications of re-opening such a case, Detective Williams decides to remain on the sidelines.

However, she does not sit quietly for long and decides to help Mora with some clues. It seems that Detective Williams trusts Mabel’s group to continue the investigation and get to the bottom of the truth. Hence, she sends a package addressed to Mabel. Inside the package is Tim’s phone. Until now, the trio lacked any conclusive evidence directly connected to Tim that would help them. Although the jewelry provided some clues, they didn’t reveal much. Now that they have Tim’s phone, they can figure out precisely what he was up to in the days leading up to this murder.

After Mabel returns to meet Charles and Oliver, she reveals that Tim’s phone arrived in a package. However, there is a much bigger surprise waiting for her. So far, we know that the black market jewelry dealer Tim was trying to take down is a person named Angel. 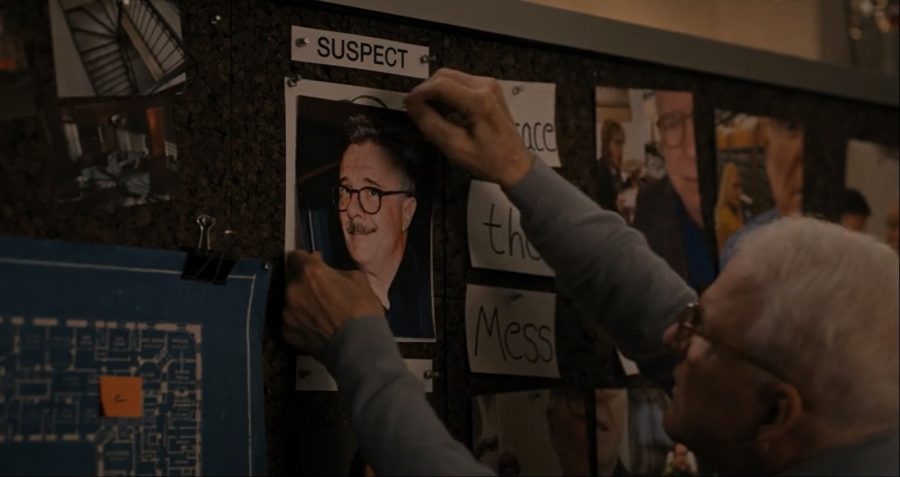 Earlier in the episode, during their conversation with Teddy, Charles and Oliver learn that his grandmother’s name was Evangelica. The check teddy gives them is in the name of a company named Angel, Inc. Charles and Oliver put two and two together and suspect that Teddy is the black market dealer.

While there is no conclusive evidence against Teddy, he could have some connection with Tim, especially due to his family’s history with jewelry. The answers lie in Tim’s phone, and the trio must first crack its password. For now, the investigation has taken a step forward, with the podcast’s prime sponsor turning into the prime suspect.