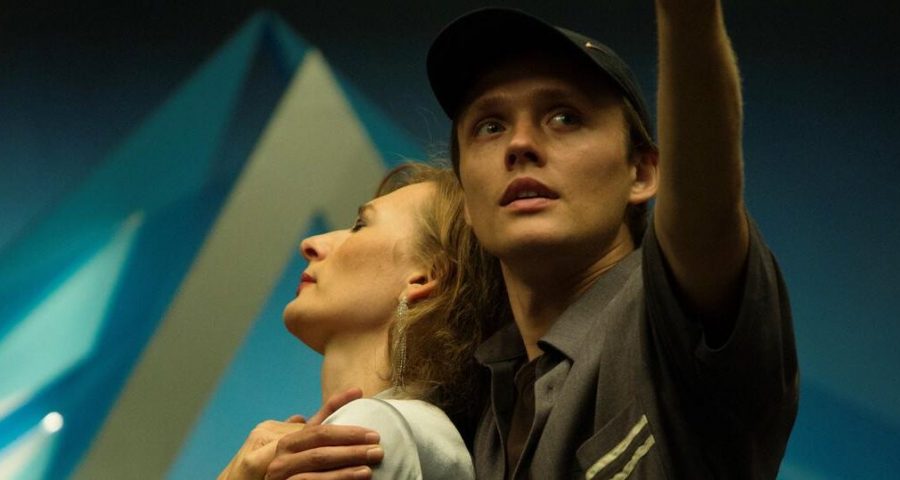 ‘Prime Time’ is a Polish language thriller film directed by director Jakub Piatek who co-wrote the screenplay with Lukasz Czapski. It is about a young man who enters a television studio on New Year’s Eve in 1999 and takes two hostages at gunpoint, making a sinister yet baffling demand. The movie stars Bartosz Bielenia, Magdalena Poplawska, and Andrzej Klak in the lead roles.

The hostage thriller is equally pulsating and unnerving as it makes us empathize with the protagonist and his rebellious act. However, as the slow-burn plot edges towards the conclusion, it delivers a shocking twist that leaves us desiring for more. Practically much of the burning questions are left unanswered by the film’s ending. If you are searching for answers to these questions, allow us to provide you some insights about the ending of ‘Prime Time.’ SPOILERS AHEAD!

In ‘Prime Time,’ a young man named Sebastian enters a studio complex on New Year’s Eve, 1999. Using one of the security guards, Grzegorz, he enters a soundstage broadcasting a live television program. Sebastian is armed with a gun, and he threatens the people inside the studio. Sebastian holds the program’s presenter, Mira, and Grzegorz as hostages at gunpoint as the people try to escape. The show’s producer, Laura, tries to deal with the situation as Sebastian makes his demand known: to be put on live television in front of millions of viewers. 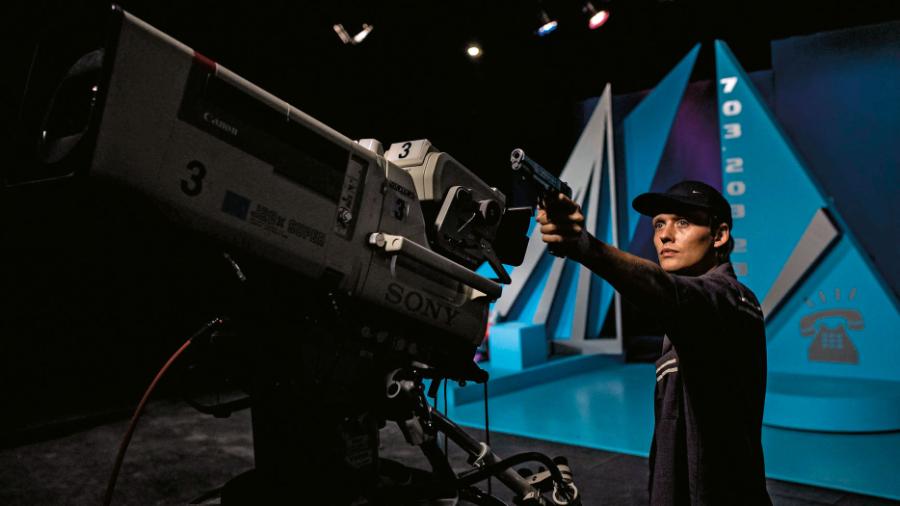 Quickly, law enforcement officers arrive to aid Laura. Krysztof, the officer in charge, tries to figure out a way to get his SWAT team to act on the situation while Piotr, the primary negotiator, and his colleague, Lena, try to negotiate with Sebastian. To lure Sebastian into surrendering, they bring in his father. However, the conversation soon turns bitter and aggravates the situation. After various failed attempts, the officers and studio team are left with no choice but to give Sebastian what he wants.

Prime Time Ending: What Did Sebastian Want To Say?

After many failed attempts, the officers finally comply with Sebastian’s demand. With Mira and Grzegorz’s help, preparations are made to put Sebastian on air right after the President’s speech. Sebastian keeps Grzegorz on the lookout to verify if the footage is really being aired or if it is another trick. It turns out to be a trick. A distressed Sebastian lashes out, the lights go off, and Mira tries to escape. Sebastian stops her, but she gets badly injured. 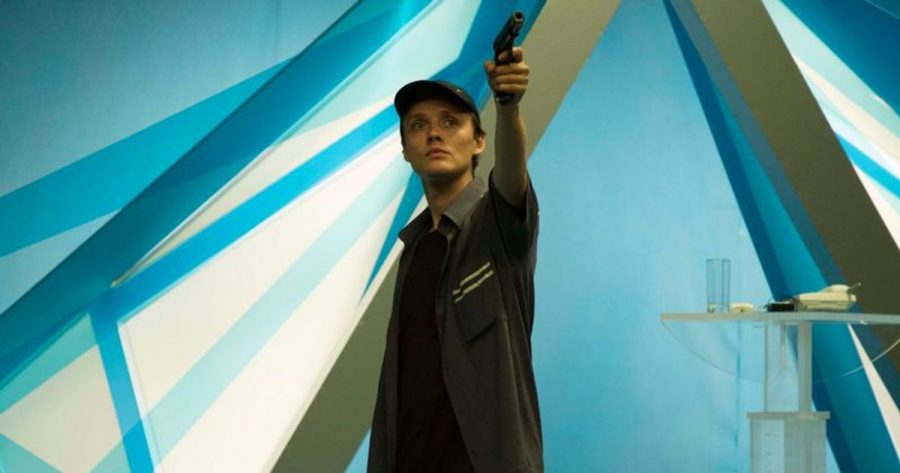 Things go south from there, and Sebastian realizes that there is no way out for him. He lets Mira get evacuated and allows Grzegorz to leave. The studio’s chairman offers to tape Sebastian’s speech. Before facing the camera, Sebastian burns the pages he has written his speech on. Then, he reveals that his gun was never loaded. He surrenders as the SWAT team brutally takes him into custody.

In the end, there is much ado about nothing as we never learn what was raging inside Sebastian that he so badly wanted to communicate with the world. He takes extreme steps to make himself heard, but in the end, his act of rebellion is one without a cause. However, we do receive certain clues throughout the movie that hint at Sebastian’s motivation. From the Y2K bug to the growing unrest among the youth, various era-appropriate social issues are shown through archived footage.

In one scene, Sebastian’s father comments on his “sick lifestyle,” hinting at an LGBTQ+ aspect to Sebastian’s motivation. Sebastian’s troubled childhood and family life also indicate that he merely wants to be on TV as an act of wish fulfillment to derive a sense of achievement. Based on the clues, one might also come to the conclusion that Sebastian is mentally unwell and acting out because of it.

However, none of the clues are proof enough to arrive at a conclusion.  In an era that predates the rise of the Internet and social media, television was the main source to voice one’s opinion. The hardships Sebastian faces in raising his voice pale the significance of what he wants to say. The director intentionally leaves the ending open to allow viewers to find their own cause in this act of rebellion while also highlighting the socio-political issues of the time period.

Was Grzegorz Working With Sebastian?

Grzegorz is a security guard working at the television studio. Sebastian enters the soundstage by using Grzegorz as a pawn. Throughout the movie, Grzegorz seems undeterred by Sebastian’s actions. He complies with anything and everything Sebastian orders him to do. Initially, we are led to believe that Grzegorz is doing so out of fear. However, even after having the chance to escape during Mira’s evacuation, Grzegorz willingly returns to Sebastian’s side. This makes us question whether Grzegorz was working with Sebastian all along. 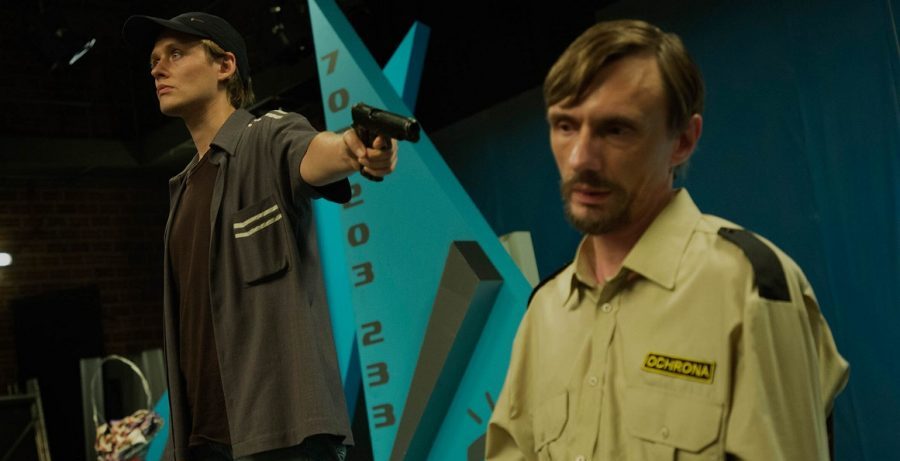 In the opening moments, we see Grzegorz leading Sebastian to the soundstage, and he is under no apparent threat. When Grzegorz has a heart attack, Sebastian is gravely concerned for him. Grzegorz is also eerily calm in comparison to Mira, who is constantly freaking out. All this suggests that Grzegorz was in cahoots with Sebastian from the very beginning.

However, before Grzegorz leaves the soundstage, he reveals that he lied about having a wife and children. Had they be working together, Sebastian would’ve likely known the truth beforehand. Sebastian is also visibly shocked to see Grzegorz return when given a chance to escape. This hints that while Grzegorz might be willingly working with Sebastian, he likely wasn’t in on the plan from the start. It is possible that Grzegorz sympathizes with Sebastian’s cause and therefore decided to help Sebastian get on live television. There is also a hint of oppression and loneliness in Sebastian and Grzegorz’s storylines, creating further bonding opportunities between them.