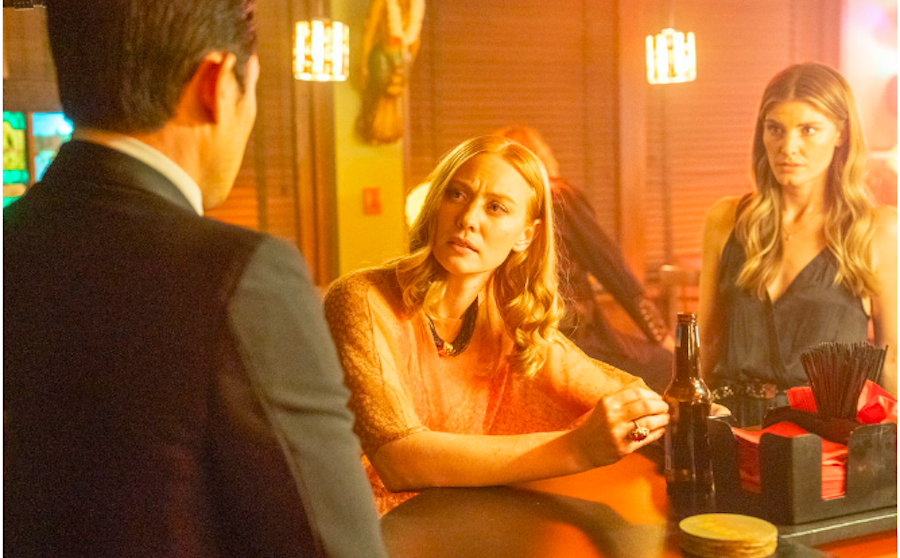 NBC’s ‘Quantum Leap’ returns with its ninth episode and takes the audience back to the time-traveling adventures of Dr. Ben Song. The last time we saw him, he was trying to save a group of teenagers who were stranded in the forest after they tried to run away from an abusive summer camp. By the end of the episode, it was revealed that Ben leaped in time because he wants to save Addison. Before he can reveal what exactly the danger is and how he came to know about it, he leaps again. In this episode, we are re-familiarised with the situation that Ben is caught up in, setting the stage for the revelations to come. Here’s what happened by the end of it. SPOILERS AHEAD

Ben ends up in 1979 where he is now the bodyguard of a famous singer named Carly Farmer. By now, he has become well-versed in the ways of his leaps and quickly assesses his situation to find out exactly what is going on around him. His mission turns out to be the very job of the person whose body he’s in possession of at the moment. Someone is trying to kill Carly, and they are relentless about it. There are a couple of suspects, and each one of them has a good motive to kill Carly which makes his task all the more difficult.

Meanwhile, Addison and the rest of the team try to understand what Ben meant about saving Addison’s life. If it means that there is some danger to her life, they need to figure it out as soon as possible. They realize that the only person who can tell them what Ben was talking about is Janice. With the help of Ziggy, Ian and Jenn locate Janice. As expected, she keeps all the secrets close to her chest, barely revealing anything while making Jenn question why Ben couldn’t trust his own team when it came to saving his fiancee’s life.

As Carly’s bodyguard, it is on Ben to keep her safe. He saves her life again and again, but the killer proves to be dedicated to the cause. This means that they have a serious vendetta against Carly and things are much more personal than they’d appeared. A quick research by Ziggy reveals that Carly’s sister Jamie was the one found guilty of her murder. The murder weapon was found in her possession which made it impossible for her to defend herself. However, a closer look at the rest of the evidence proves that Jamie was framed for it.

With Jamie in the clear, the suspicion falls on Trevor. He is Carly’s manager and his behavior seems a bit off to Ben. It turns out that after Carly’s death, Trevor was the one who got the publishing rights to all of her songs and made millions out of the deal. This also leads Ben and Addison to figure out that it was Trevor who had conspired to keep Carly and Jamie apart. When she fell into addiction, Trevor intentionally kept Carly away from her. Not only that, but he also fabricated threats from Jamie and showed them to Carly so that the sisters wouldn’t reconcile.

Eventually, however, it turns out that even Trevor is not the killer here. In fact, he is in love with Carly and wants to be with her. This is why he has been isolating her from Jamie and everyone else. When Carly fires him, it cuts off his access backstage. Still, Ziggy says that Carly was killed backstage, which means that the killer is still on the loose. Ben realizes that there is someone else who knew about the false threat notes, and this is the person who invited Jamie to Chicago so that they could frame her for Carly’s death.

After a brief phone call with Trevor, Ben discovers that it was Loretta all along. A backup singer for Carly, Loretta had been in an on-and-off relationship with Trevor. She loved him, but he loved Carly, which was reason enough for Loretta to try and kill off the singer. On top of that, she also held resentment for not being credited as a songwriter, believing that Carly was depriving her of her chance at recognition. This also explains how the killer was always in close vicinity to Carly and had a chance to kill her whenever they wanted.

At the concert, once again, Loretta tries to kill Carly but Ben finds her just in time to stop the murder. Caught red-handed, Loretta is arrested. In Trevor’s absence, the sisters are reunited and Jamie joins Carly’s band. Ziggy reveals that Carly got her happy ending, and so did Jamie. Ben’s mission in 1979 is successful and leaps to his next one.

The ending also shows Jenn bringing Janice to the Quantum Leap headquarters. While she still hasn’t revealed anything about her and Ben’s plans, Magic is sure that they will find a way to make her talk. At this point, Jenn is more concerned about Janice’s intentions. It is clear that Ben leaped to save Addison, but because he couldn’t trust his own team with this secret means that the Quantum Leap project might have something to do with whatever fate is about to fall on Addison.

After talking with Janice, Jenn is concerned that they might find what they are looking for, but there is a good possibility that they will not like it. This revelation might also be the very thing that drives a wedge in the team, forcing Addison to embark on the path that will eventually lead her to whatever bad fate the future has in store for her.