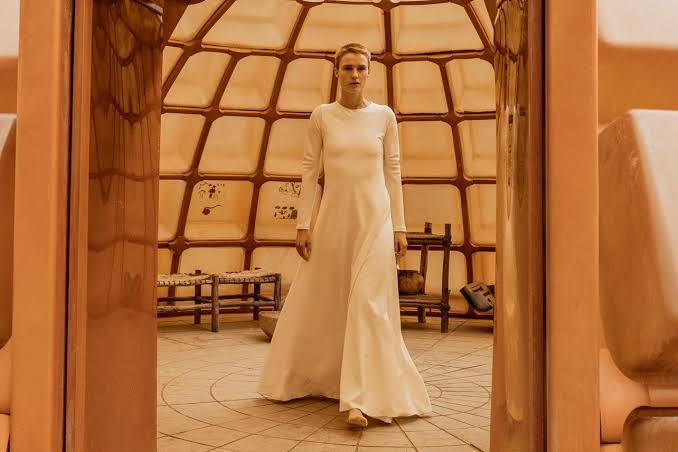 The penultimate episode of ‘Raised by Wolves‘ is aptly titled ‘Umbilical’. Umbilical cords feature heavily in the episode, with cords connecting Mother and Sue, Mother and the creatures of Kepler 22-b and even Mother and the rapist. As HBO Max’s prestige science fiction series reaches its conclusion, several connections are made and broken throughout the course of the ninth episode. Here, we delve deep to understand them.

Marcus, incensed by Sue and Paul’s escape, grows more insane by the minute. He reverently prays to Sol to convey to him the location of his wife and son. When that yields no results, he undertakes a type of pilgrimage to renew his faith and Sol’s trust in him. The Mithraic grow increasingly wary of their erratic leader. Among them is Hunter, the sole member of the original settlement not to make his escape. Guilted at the thought of causing Father to be reprogrammed into a Mithraic servant and thereby spurring on the series of unfortunate events, Hunter attempts to make amends. He succeeds in cracking the password prohibiting the real Father from taking charge. Together, the two hatch a plan for escape and follow through with it. They steal the lander and take off to find Mother and the others.

Mother, meanwhile, is busy diffusing tension between Tempest and the rapist. Upon discovering that the criminal is still alive, Tempest is ready to strike him dead, but is stopped by Mother. Mother shows Tempest her baby bump and explains to her the role the rapist will play in saving her child’s life. She uses the rapist as a mobile blood bag and transplants his blood to her child. The two set off to find shelter, but are stopped short when a shiny metal object catches Mother’s eye. The duo discovers a set of metallic Tarot Card bearing assorted images.

They are interrupted when Mother spots Campion, Sue, and the children making their way towards her. The gang had been exploring the nearby Ark wreckage and had made a discovery of their own: a long lost Mithraic artifact is uncovered from the wreckage by Holly. Mother, Campion, and the rest of the Mithraic children share a happy reunion.

Sue, however, is wary of Mother and aims her gun at her in trepidation. In a poetic moment, the children turn protector and Mother, the protectee. They shield Mother with their bodies as Sue levels her gun at her. When Mother bares her now prominent baby bump, Sue and the children are rendered slack-jawed; in a tear-jerking moment, we see Campion gaze at his sibling-to-be with awe and wonderment. But like all moments of joy and splendor on ‘Raised by Wolves’, this, too, doesn’t last long. Mother’s energy is draining, so the children call upon Sue – who warns that she’s a doctor, not a mechanic – to help her. Sue relents and tends to Mother, who soon shows drastic improvement.

The unlikely pair find solace in each other and, after a frosty start, begin to bond. Interestingly, in this episode, Mother finds female companionship in, both, Sue and Tempest. Mother and Sue share common ground in their predicaments: both women once fought for the opposing side – Mother as a Necromancer for the Mithraic and Sue as a soldier of the atheist army. The two women also bond over their maternal instincts toward their respective children. Mother and Tempest, too, share a mutual understanding of each other’s plight: both were forced into their roles as maternal figures by men, Campion Sturges, and the rapist, respectively. Mother, to Sue and Tempest, becomes an important female figurehead. This is partly why, when Mother later finds herself in danger of losing the baby, Sue jumps to her rescue. Here’s what went down at the end of the episode.

With renewed vigor after Sue’s treatment, Mother ventures out and attempts to scan one of the metallic Tarot Cards. She experiences a ‘vision’ and is transported to a different time and place. There, a group of hooded figures beholds a strange alien creature of unknown nature. Mother is brought back to reality when the blood flow between her and the rapist is suddenly reversed. Now, it’s Mother transplanting blood to the rapist.

Using Mother’s weakness to his gain, the rapist takes Tempest hostage and prepares to make his escape. Holly’s presence of mind comes useful here and she is able to momentarily distract him while Tempest makes off with his warden android’s head. She tosses this head past the permissible perimeter and the rapist’s head is pulverized by the bucket before he can attack Tempest. Finally, Tempest brings her rapist to justice.

But the relief is brief. A few feet away, Mother is quickly losing blood and her baby. The reversed blood flow caused grave damage to the unborn child, for whom death is practically near. Sue then heroically steps up and donates her blood to Mother, saving the child’s life. More good news is in store. Father and Hunter join the group and a family reunion takes place. This is the first (and likely last) rewarding moment this season of ‘Raised by Wolves’ offers us.

Far from the group, Marcus continues to pine for his own family reunion. Unfortunately for him, things do not shape the way he imagines them. He is driven to murder after learning that Father and Hunter have made off with the landed, leaving them no form of transportation. Lucius and the rest of the Mithraic now regard Marcus with even more suspicion. Then, with a series of trick questions, Lucius strips Marcus’ facade off and uncovers his real identity. The two reach loggerheads and come to blows. Lucius gains the upper hand over Marcus and shoves one of Mother’s eyes down this throat. The Mithraic leave as Marcus chokes.

As Marcus chokes on Mother’s eyes, the white goo that flows within androids erupts from within him. If anything, this is near concrete proof that Marcus will remain alive. Here’s why: when the intravenous blood transfer from the rapist to Mother is reversed, her own blood is drained into the rapist and seemingly empowers him to develop almost superhuman strength – he single-handedly, not to mention blindly, bests Sue and the children and would have made a clean escape if it weren’t for his zealotry. We know then that an android’s blood, when infused in a human’s body, can have an empowering and sustained effect. Marcus will likely experience the same effect as the rapist did.

How did Mother get pregnant?

Even for science fiction’s endlessly imaginative landscape, an android conceiving a new, hybrid species of humans is nearly unheard of. Which is why Mother’s conception is so wildly spine-tingling. How did she and Campion Sturges create the impossible? Well, we learn in a previous episode that Necromancers are not products of pure Mithraic ingenuity. Contrarily, the machines were engineered by the Mithraic using scriptures of unknown origin. The Mithraic would still likely be blissfully unaware of the full capabilities of a Necromancer. For instance, Marcus and his tribe of Mithraic soldiers were taken by utmost surprise when Mother demonstrated her telekinetic abilities. The fullest potential of a Necromancer is yet unknown to most and even to Mother herself. Campion Sturgess, a once-in-a-generation mind, could have tapped into that yet unexplored potential, uncovered Mother’s ability to conceive and developed a plan to impregnate her.

What was the artifact Holly found?

Throughout the show, Guzikowski often defers to Roman mythology to make lucid, or cheekily make even murkier, the show’s core themes and concepts. The show’s title, ‘Raised by Wolves’ pays homage to the Roman myth of Romulus and Remus, twin brothers raised by, you guessed it, a wolf ( a she-wolf, to be specific). The artifact Holly finds is the tooth of the she-wolf that raised Romulus and Remus, one that the Mithraic apparently consider holy. Holly considers this a sign from Sol, prompting her to immediately pocket the artifact.

What was the vision Mother experienced?

The characters in ‘Raises by Wolves’ are inundated with visions of the fantastic and supernatural. Mother’s so-called vision, however, was likely less a vision and more a journey into either the past or present of the planet. She observes what appears to be a hooded alien race that joins in the worship of a creature most putrid to look at. Interestingly, the hooded figures bear an uncanny resemblance to the entity that seems to flit from place to place on the planet in the present time. Still, questions remain. Who or what is the creature being worshipped? Is this the entity the Mithraic refer to as Sol? How far back into the past or future does Mother’s ‘vision’ go? In keeping with ‘Raised by Wolves’ tradition, answers to this will likely only lead to more questions.