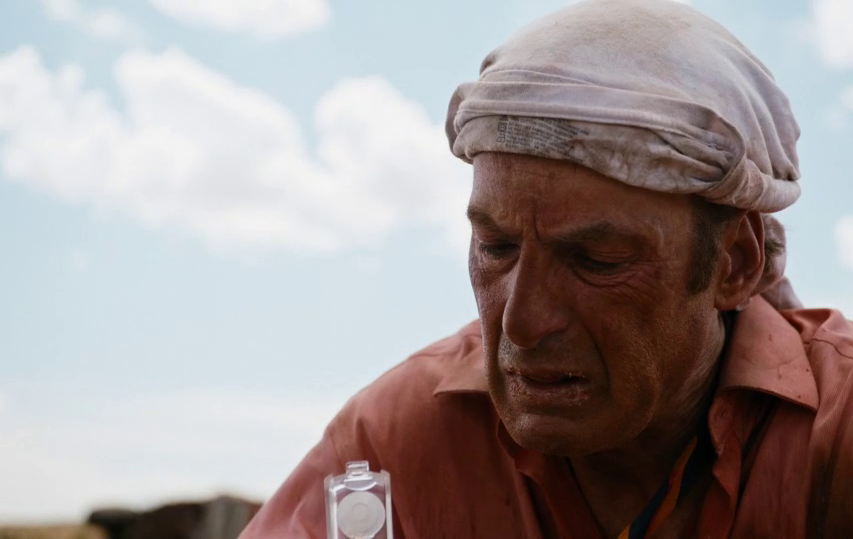 The last few episodes of ‘Better Call Saul‘ have been phenomenal in building Saul’s character arc. On that note, this episode perhaps hardens Jimmy’s transformation to Saul, symbolically and psychologically. Titled “Bagman,” the episode’s structure is simple. It does not deal too much in subplots and takes no time to set up the central characters. However, it is the visceral nature of the episode, along with the sheer brilliance of the visuals, that makes ‘Bagman’ one of the strongest episodes in Season 5 yet. Curious to find out what goes down? We have the recap and review right here. 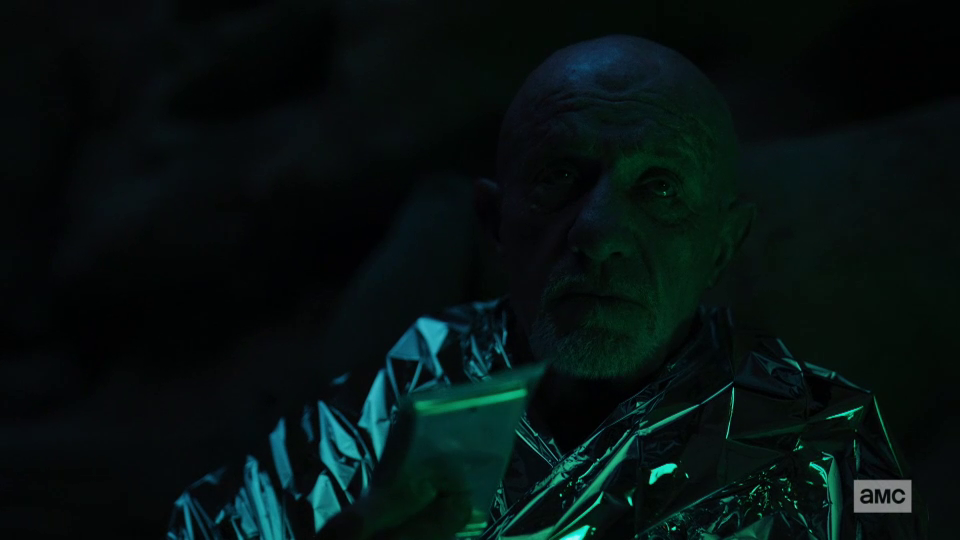 The episode has a skeletal premise. Now that Jimmy or Saul is in with the cartel, Lalo asks him to act as the bagman. He has to meet with the twins, Leonel and Marco Salamanca, and bring home seven million dollars. Kim is not happy to hear that Jimmy has gotten in this deep with the cartel.

The exchange goes off smoothly enough, but Jimmy gets targeted by some bandits. Mike shows up and saves the day. However, the two are trapped in the desert and need to hike it back. Kim gets worried about Jimmy’s disappearance and tries to extract information from Lalo. However, she gets nothing out of the ruthless Salamanca.

Meanwhile, Saul and Mike have to deal with one rogue bandit who’s still on their tail. Saul ultimately offers himself as bait, allowing Mike to eliminate the last unfriendly before they resume their way back home. 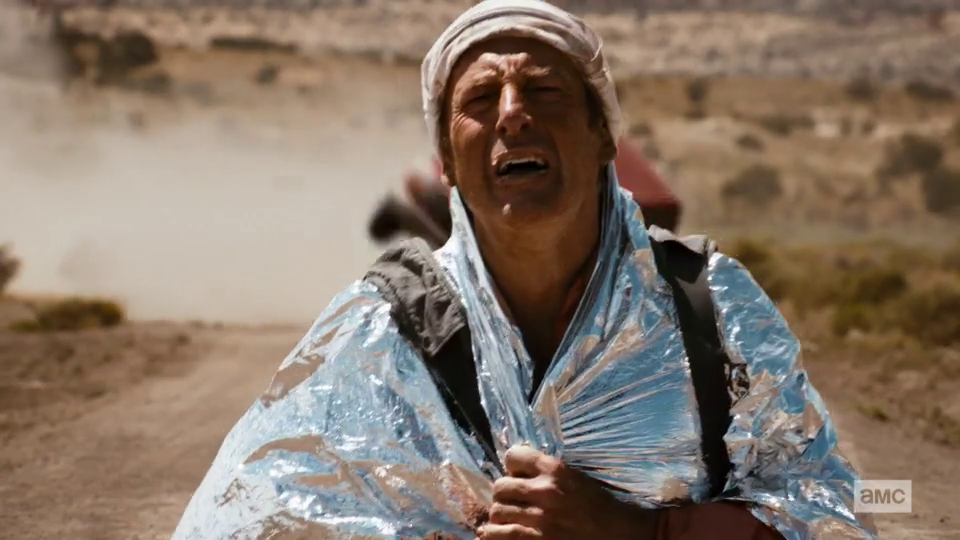 ‘Better Call Saul’ has perfected the art of storytelling, which is why an episode like ‘Bagman’ can still feel so rich despite the physicality of it. The episode doesn’t have too many dialogues. It starts with the Salamanca twins, or the Cousins, who are famous for their silent menace.

We see them fill up two duffel bags of cash, while a bloodstained car is being cleaned outside. Back in Albuquerque, Lalo seems to be laughing at the ‘accident’ at Los Pollos. He is unaware that this is part of Gus’s broader plan to remove him from the game.

Lalo is now eager for Saul to act as his bagman and bring him the money. The Salamanca head’s attention to detail is evident as he knows how many miles on the dirt road Saul has to travel. The initial reaction is to reject the offer, which Lalo takes calmly enough. However, Jimmy needs to enter situations where he feels he cannot give up the chance of a payday.

Since Lalo has always been open-handed, Saul demands $100,000. He will also emerge a friend of the cartel at the end of this ordeal. When Kim hears the news, Jimmy’s continued honesty gladdens us. However, her sentences to him are punctuated by fear and doubt. She does not like Jimmy’s new mission and does not want him to go.

Suddenly, our confident lawyer sounds a lot like the young girl with the cello, that we’ve seen earlier. Jimmy’s assurance is dangerous, like Kim’s mother’s. They’re both addicted to different things, and perhaps Kim realizes that her relationship with Jimmy will come to a terrible end as well.

Although the exchange goes off flawlessly, Saul runs into an ambush, and the episode has no qualms about stripping Saul of his grandiose, that he expressed in ‘JMM.’ For all his big talk about thunderbolts shooting from his fingers, Saul is fixated when the bullets start flying. It requires a counter-ambush from Mike to control the situation.

A subsequent God’s eye view of the scene shows how petty Saul is, in the context of things. The attack is also an end of sorts, for Jimmy. His rickety Esteem and the world’s second-best lawyer mug, are both bullet-ridden. They have been two of the most potent symbols of Jimmy’s identity. Both of them are taken out in one fell swoop.

Mike and Saul begin their journey across the desert, making for some excellent visuals and one of the strangest, but most befitting uses of Labi Siffre’s “I Got The.” The episode is also bound to remind viewers of “4 Days Out” in ‘Breaking Bad.’ However, Jesse and Walt’s gabfest is replaced by masterfully maintained silence between Mike and Saul.

I use the word ‘masterfully’ because Mike makes an impassioned speech to urge Saul back on his feet. It is a speech about providing for one’s family and is all the more tragic because we know the end awaiting for Mike. In the desert, Jimmy feels that he’s nearing death. The ghosts of his past are never too far behind at this moment. Mike uses a mylar sheet to keep himself warm, which reminds Jimmy of Chuck and his space blanket. The lawyer opts to shiver the night through than put on the accursed sheet.

The next morning, as Saul is nearly drained, the bandit makes a comeback in his vehicle. Although Saul is unwilling to get up after Mike’s moving speech, the oncoming threat does it. Now, Saul might not have lightning from his fingertips, but he can run a damned good hustle. Jimmy knows that the first rule of a con is misdirection. He puts on the blanket and walks along the road, drawing the car’s attention.

It allows Mike to take the fatal shot and eliminate the threat. While someone more accustomed to this lifestyle, like Gus or the Cousins, might have kept on walking, Saul is transfixed. Finally, he takes a long swig of his urine (the drinking water was over) and leads the way back home.

Jimmy goes into the desert, but Saul emerges. He’s now a friend of the cartel, having paid a terrible price. As the safety blanket flutters away, we are reminded of Walt’s trousers fluttering away. It is a beautiful moment, combining fan service, and showing the last vestiges of Jimmy McGill disappearing.

On a side note, Kim has met with Lalo, who is now aware that his lawyer’s wife is privy to his business. We are sure this is not their last meeting, and cannot help feeling scared for Kim. While Slippin’ Jimmy can fit into this world of darkness, Kim is likely to end up hurting herself. That said, ‘Bagman’ makes for an intense watching experience, and is easily one of the best-executed episodes this season.