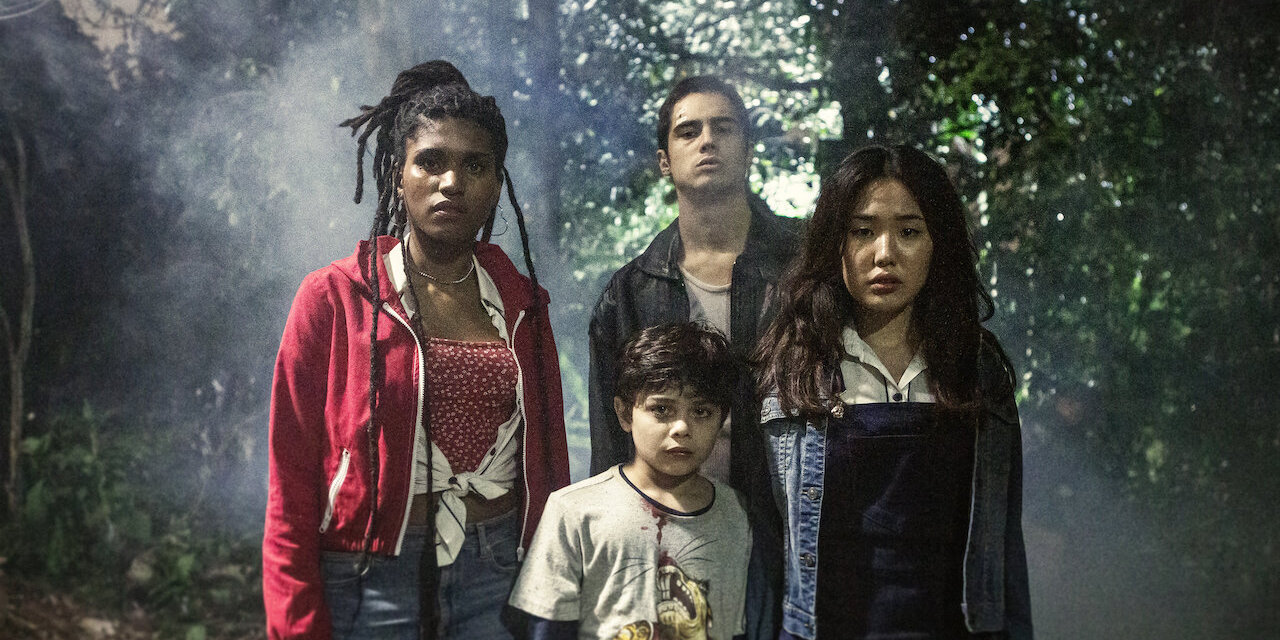 Brazilian supernatural show, ‘Spectros’, is Netflix’s latest addition to the slate of the genre that has recently had shows like ‘Locke and Key’. This, too, has a young kid and a couple of teenagers fighting an otherworldly force. However, it neither has the charm nor the consistency that the story of Key House had.

If you had been waiting for it, hoping that it would be yet another great foreign language show, which the streaming service has a great collection of, no doubt, you would be disappointed. It would become even more disappointing when you realise how well it could have actually turned out.

‘Spectros’ begins with a crime. Three teenagers are held for questioning by the police on the charges of burglary and murder. A doll is confiscated from them and it looks like they have landed themselves in the soup. However, the cops fail to make them talk. They use all the tried and tested methods to get them to confess, but nothing works. In truth, if the kids did tell them what had actually happened, the cops would never believe them anyway.

Mila had met Pardal at the garage where she came to get her father’s car. A little dispute with the owner led to Pardal quitting the job and Mila leaving without the car. At school, Carla, who used to be her best friend, terrorises her into giving up her essay. Unbeknownst to her, Carla suffers from severe headaches and has voices whispering in her head.

Meanwhile, Pardal tries to find a new job so that he can support himself and his little brother, Leo, who is a fan of horror. In the evening, all of their paths collide and they find themselves in trouble while looking for Mila’s dad at a witch’s house.

It is always a delight for the fans of the supernatural horror genre when history is added to the mix. There is no story better than the one that uses its premise to highlight the travails of the present or the sins of the past. On the surface, ‘Spectros’ tries to be all of that. It uses the history and culture of Liberdade to concoct a story that reaches back to the time of colonial powers. Whatever chance it gets, the show comments on the history that is stained with the blood of the oppressed and downtrodden. However, it doesn’t succeed in making a mark on the audience.

We can divide ‘Spectros’ into two well-defined halves, and considering everything, it wouldn’t be a surprise if we discovered that both the halves were written by two different people. Even if the same person did write the complete series, they seemed to have lost interest in it after a while, and there is a very good reason for us to assume that.

The first half of the series is great. It plays with the timeline, moving the events back and forth, shuffling the pieces until they all come together to complete the picture. The show begins not as a supernatural show but adopts the tone of a good old whodunit. What really happened that night and how did the characters end up where they are now- these questions keep you engaged, and episodes pass by like a breeze. Right from the introduction of the characters to the point where everything goes haywire for them is brought out pretty well, and by halftime, you are pumped up to find out what’s next.

Once the second half starts, the entire approach towards the storytelling changes, which makes sense. But one episode in, and you realise that the tone, which was all about mystery and world-building, is shifting as well. The plot starts deteriorating and as time passes by, it becomes borderline ridiculous. The intelligence that had been displayed in the storytelling in the first half is completely upturned when it comes to joining the dots and revealing secrets, if the audience hasn’t already guessed them.

Even though the story is not tense enough, humour is needlessly inserted in it, which makes it even more unappealing. By the time the story ends, you have already lost interest and you barely care about any of it. After some time, it feels like the makers wanted to get over with it and used whatever trope they could to tell what happened and why it happened.

What makes it even sadder is that ‘Spectros’ had great potential. It had the chance to use its story to showcase the local culture and history to the international audience. And in the first half of it, it really was doing quite well. There was a direction to it, as well as flair. But something went wrong along the way and from a rather good series, it goes down to becoming a failed attempt.