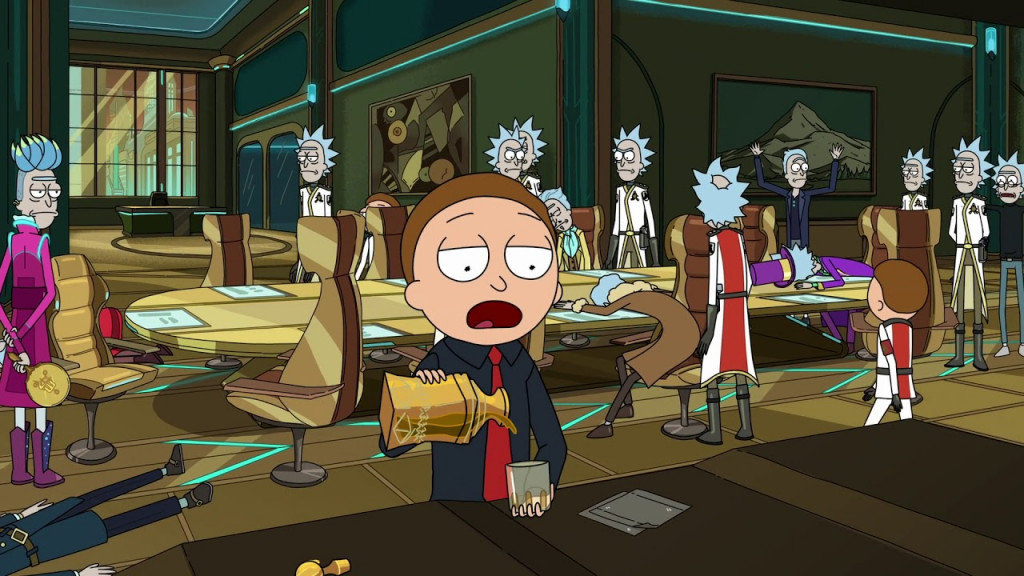 Well, the entire run of ‘Rick and Morty’ until now has brought us down to this: The Ricklantis Mixup, the single best episode that has been produced for the series until now, also among the best 25 odd minutes I have spent in front of a screen watching a TV show. It is unbelievably well written, and the only other animated TV show that comes close to reaching that level of epic, in my opinion is the BoJack Horseman season 5 episode, ‘Free Churro’. The latter being a sad-com attained a level of depth and relevance that is rare for even TV shows, forget animated shows, while the former being primarily a sci-fi show soared and scored on its storytelling abilities, creating multiple interweaving narratives that seamlessly come together in the end to deliver a twist that I did not see coming from any direction. Goosebumps here are an obvious understatement. 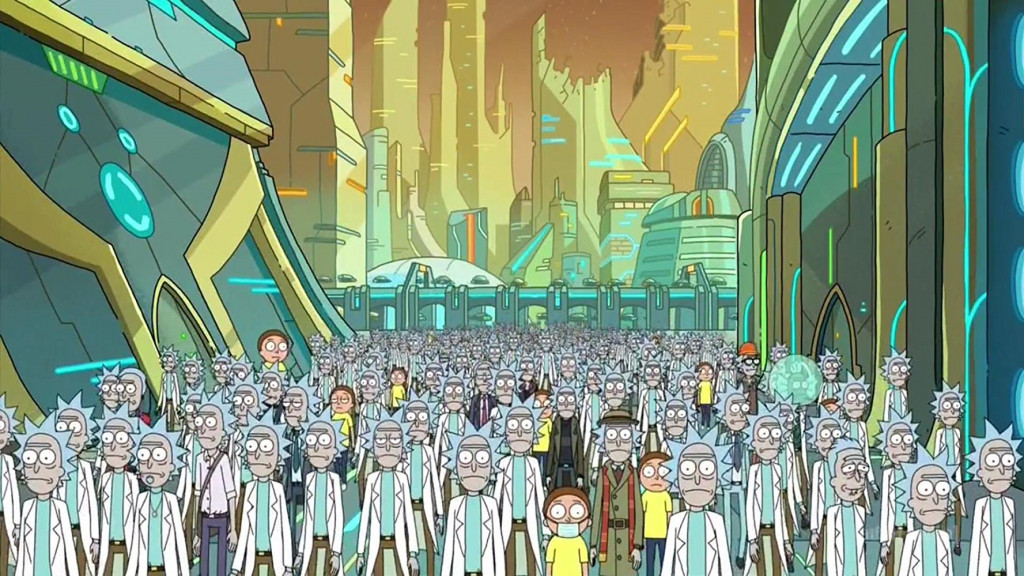 The focus then shifts to the Citadel of Ricks, now being reconstructed without a council of Ricks since they were murdered by Rick C-137. The divide between Ricks and Mortys grows wider, the Ricks in the citadel are dissatisfied owing to their own innate nature being stifled by Ricks in authority, Rick-less Mortys have turned to crime, and all this while the newly democratic Citadel preps for its presidential elections with five Ricks against one Morty from the Morty party facing impossible odds. The narrative from here branches off into four separate ones, and meets in the end for the big twist. 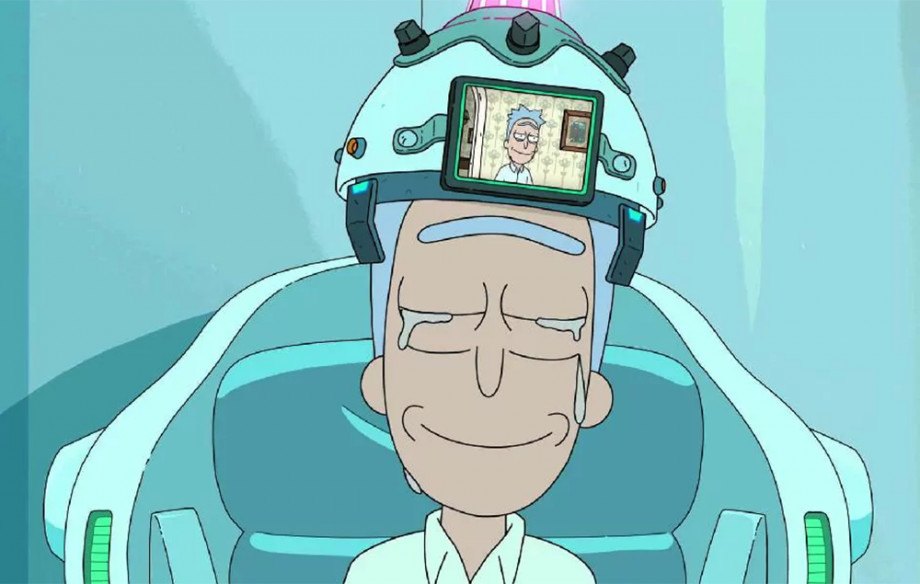 Simple Rick’s is a wafer company active in the Citadel, a rip-off of any big corporate conglomerate if you may, but one that produces wafers laced with secretions from a “simple Rick”, one who took to the simple joys of life and has a memory with his daughter fed and replayed to him for his brain to secrete the Simple Rick’s wafers secret ingredient. One of the Ricks that has been working in the factory for more than 15 years now rebels and shoots his supervisor, holding a vegetative Simple Rick hostage in exchange for his freedom.

The owner of the establishment appears and appears to heed to him and agree, rewarding rebel Rick with his freedom. Just as he is doing so, he double crosses rebel Rick to trap him instead of Simple Rick, replaying the memory of being free in his head over and over again to make his brain secrete the secret ingredient for Simple Rick’s “freedom” wafers. The best thing about this arc apart from this ridiculously twisted arc, apart from the obvious socio-economic (or should I say rickonomic) commentary is that it’s narrated by Sam Elliott. 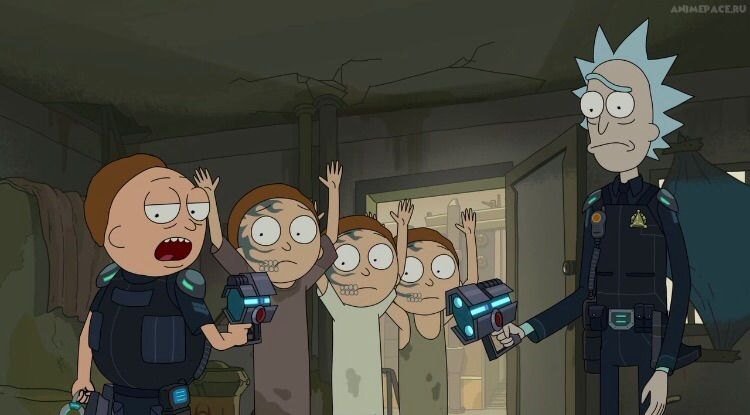 It’s a novice Rick’s first day as a cop while he is paired with a pot-bellied veteran Morty officer who is generally mean to his own kind, Mortys. The two investigate a local robbery in a downtrodden part of the Citadel, where after illegally harassing two Mortys at gunpoint, Cop Morty gains intel that the Morty town locos did it. While confronting them at a dingy hideout where a bootlegging portal chemist Rick is also present, who immediately dies from a failed attempt at opening a portal, cop Rick is stabbed by one of the locos, resulting in him being immediately shot down by cop Rick. While he is waiting by their squad car, cop Morty detonates a bomb that destroys their hideout and the arrested Morty town locos, claiming it to be the same old story: Mortys killing Mortys. 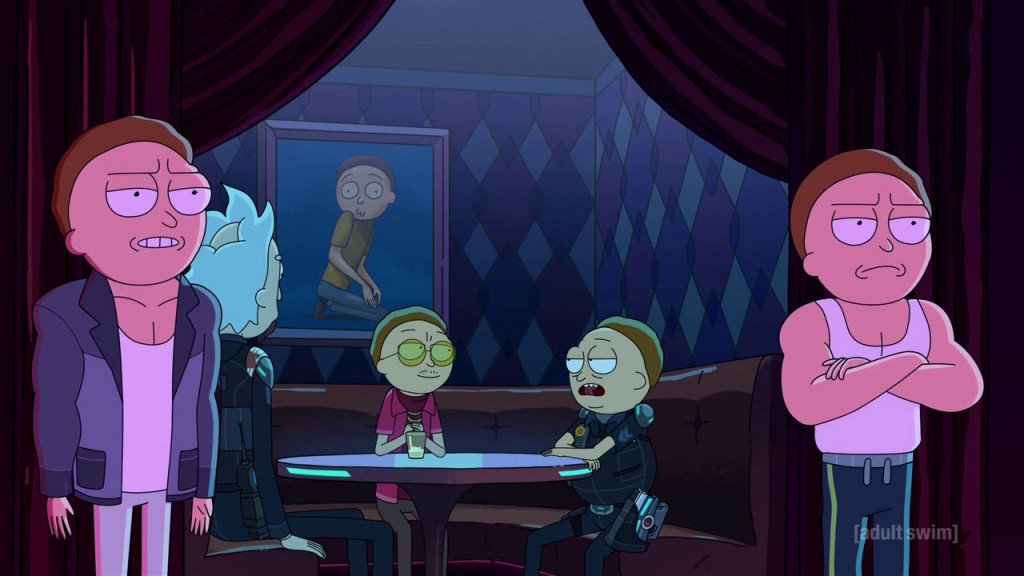 The two then go to a pub called ‘The Creepy Morty’ where they meet the local mafia Bog Morty of the death of the locos, where after learning that cop Morty was on his payroll, cop Rick attempts to arrest Big Morty, enraging him and resulting in a shootout. The frenzy ends with cop Morty shooting down Big Morty, and cop Rick gunning him down in retaliation. He immediately surrenders himself outside the club, claiming it to be the same old story: Ricks killing Mortys. Shortly after confessing, he is released because of the departmental codes being reset after the final revelation and is seen resuming duty. 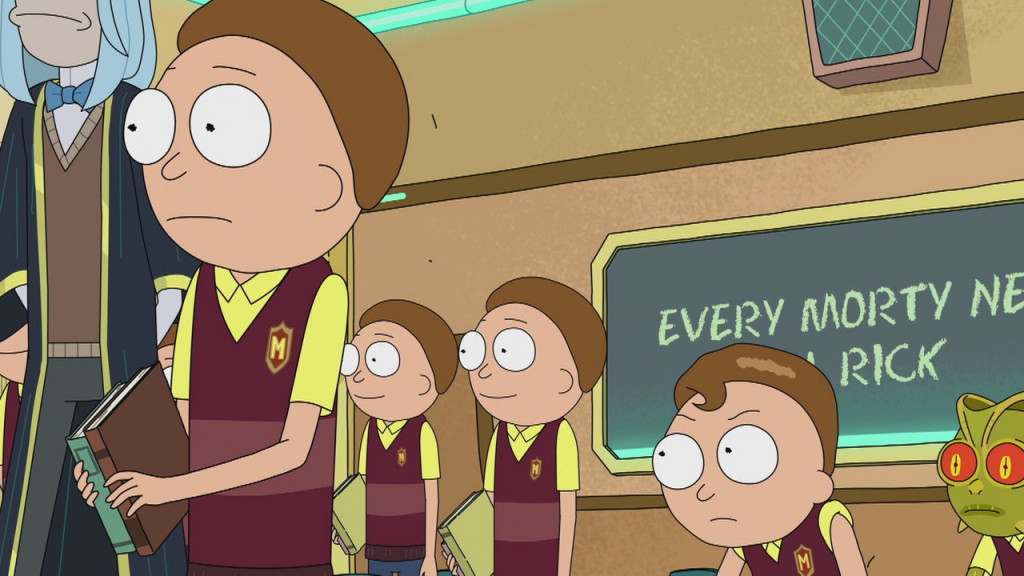 The Citadel has a Morty Academy set up where new, abandoned and “single” Mortys whose Ricks have been killed on intergalactic adventures are trained and paired with new Ricks. Four among those, fat, lizard, slick and glasses Morty plan to go to the mythical wishing portal in the citadel, where it was believed that wishes were granted when something important to the wisher was sacrificed. Due for “graduating” the next day, the four decide to finally make their way to it, even as Slick Morty grows increasingly weary of his own existence and the rampant practices in the Citadel, knowing that he was part of an experimental line-up of Mortys with a drama implant. While each of them sacrifice something inconsequential, Slick is overcome and ends up jumping into the pit himself, wishing that anything about their predestined lives could change. It is revealed that the “wishing portal” was actually a garbage dump where Rick threw their waste from the citadel. The conclusion to this arc is reached when the three go back to the Academy and find that it has been shut off for good due to a major development in the Citadel, with Professor Rick exclaiming that things were going to change. The three reminisce that Slick’s wish came true indeed. 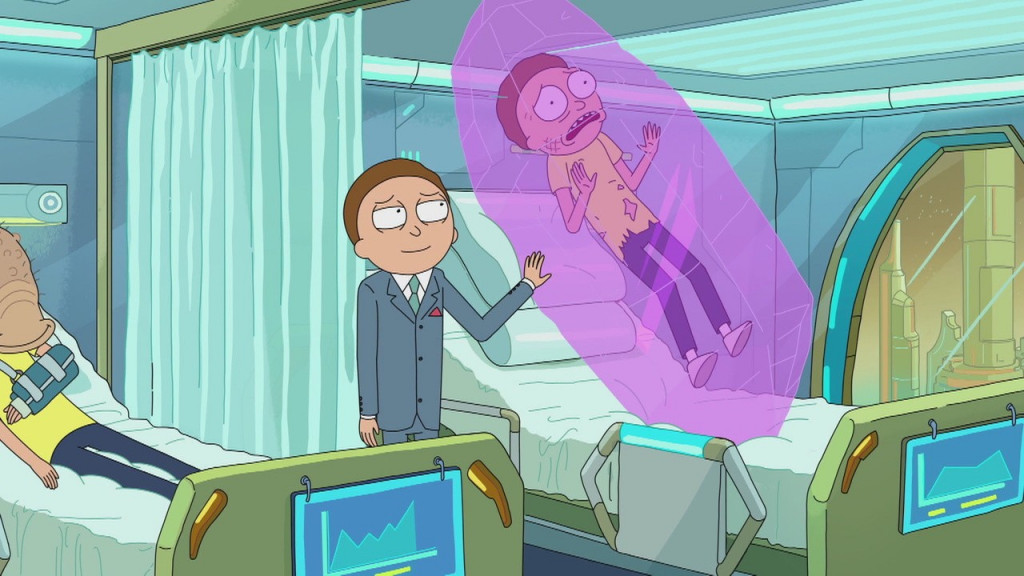 The best storyline out of the four, also the conclusive one. While the remaining three take place in the citadel parallelly with this one, all of them in the end tie up into the conclusion of Candidate Morty beautifully. Presidential elections are underway at the Citadel and while there five different Ricks competing, the sixth candidate who is not taken seriously at all by the committee or fellow candidates is an underdog Morty from the Morty party. Even his campaign manager doesn’t believe it can be anything but a humiliating loss.

However, at the presidential debate, candidate Morty turns the tide in his favour and sways his audience with an articulated speech on how he would change things in the citadel, including the Ricks in the citadel who begin believing in him, given the current political climate and distrust in the Citadel right now. The campaign manager is immediately fired for not believing in him, and while drinking at a bar, he is handed over a crucial piece of information revealing that candidate Morty wasn’t who he was claiming to be, which urges campaign manager Morty to attempt to assassinate him, unsuccessfully. He is beaten up and incarcerated, while moments later, it is revealed that candidate Morty had won and was President Morty, that too by a landslide. 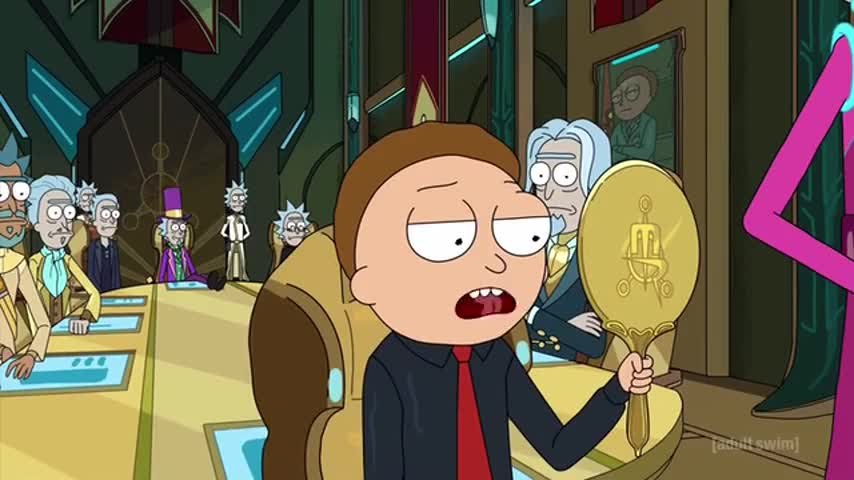 In a meeting of the council that follows with Morty presiding, the shadow council of Ricks mock him and tell him that they have always been running the Citadel no matter who sat in the chair. In a nod to the first Godfather, president Morty goes full Michael Corleone and has the shadow council of Ricks assassinated, along with anyone he considered a threat to his rule, including campaign manager Morty, cop Rick and many others thrown into the abyss of Space, while making a “cold, calculated speech with sinister overtones” as ‘For the Damaged Coda’ by Blonde Redhead plays in the backdrop, as he claims that speeches were for campaigning and that now was the time for action. In the holy mother of all revelations, we see that the information received by campaign manager Rick revealed him to be Evil Morty, with the papers and him floating around in space as the episode closes. 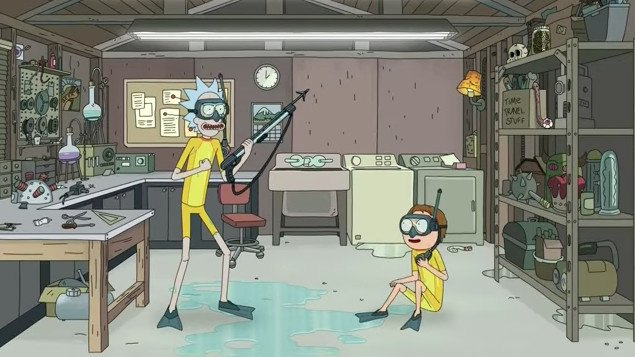 We see Rick and Morty form C-137 return to Earth and recounting their amazing adventure and sexual encounters with the mermaids in Atlantis. As a curious Morty asks what Rick felt about the newly constituted Citadel, he scoffs and responds that he didn’t believe that it would have any bearing over their lives ever again. 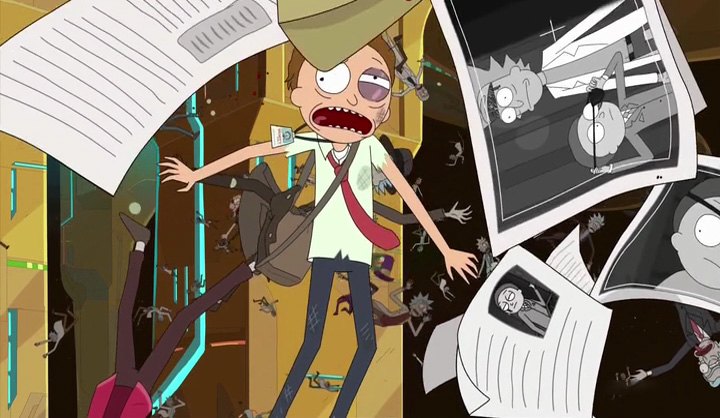 Ironically, the one episode that didn’t make me laugh once, yet easily tops the list of best Rick and Morty episodes. Undoubtedly, ‘The Ricklantis Mixup’ or ‘Tales of the Citadel’ is the most complex, dark and serious episode to come out of the show, and that is not necessarily a bad thing if it is handled this well. There is so much going on in this episode, it would seem like an impossible task to list all of it here, but be assured since the episode accomplishes this in 22 odd minutes, with clear distinction. It’s ingenious, slickly and smartly written, and manages to carve an amazingly intriguing antagonist over just two episodes, opening up a galaxy of possibilities in the seasons that follow. Bloody brilliant stuff.