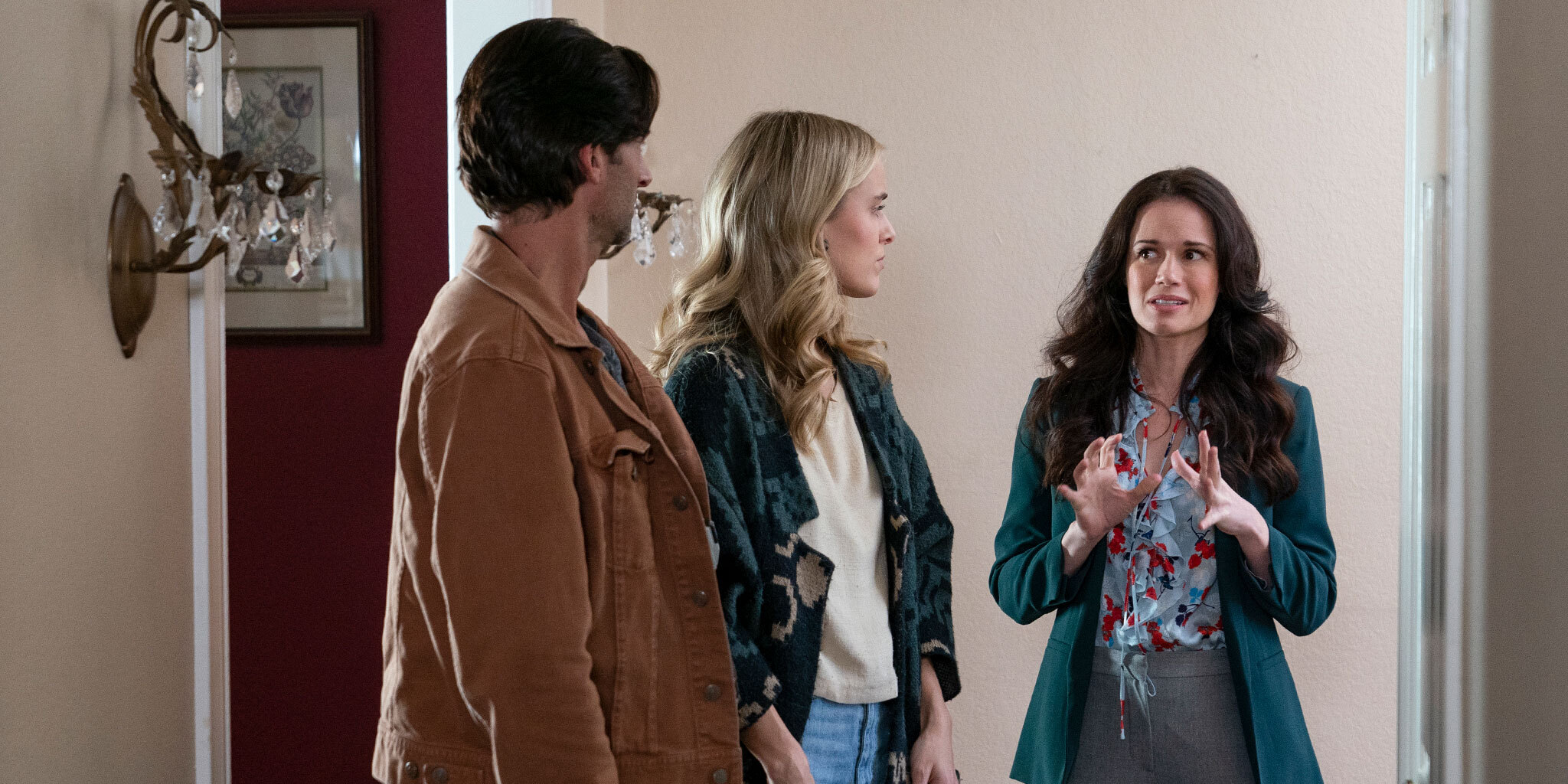 Lifetime’s ‘Ruthless Realtor’ is a thriller that follows a newly married couple as they move into their dream home, unaware of the dangers that await them. Annie and Ralph Savage are a blissfully married couple, who go house hunting in search of a decent house in a peaceful and friendly neighborhood. They stumble across an eccentric realtor, Meg, who helps them in finding a perfect house. As Annie and Ralph adjust to their new surroundings, Meg begins to invite herself to their abode, quite often than required, and appears to be obsessed with their relationship. Of course, Annie gets irked by her intrusive nature and talks to Ralph about it, who feels that Meg is lonely and yearning for friends.

Things get seriously weird when Meg warns Annie and Ralph that someone is coming to kill them. Annie asks Meg to stay away from their life but Meg refuses to back down. The couple calls the cops on Meg and she gets arrested. Later, Annie receives a package that contains shed-loads of information that details how former homeowners were hunted by a dangerous prowler. She gets dazed and confused about Meg’s intention and begins to wonder: Is Meg genuinely trying to save their lives or is she a psycho? Curious to know where ‘Ruthless Realtor’ was filmed? We have got you covered.

Originally titled ‘The Realtor,’ the stalker thriller has been directed by Devon Downs and Kenny Gage. The movie was extensively filmed in California, a global trendsetter in popular culture and home to some of the major film studios in the world. Here are the specific locations where ‘Psycho Escort’ was filmed. Let’s go through the specific filming sites!

Several parts of the movie were filmed at Film Studio LA, which is an 11,000 square feet standing set sound stage, located at 7803 Industry Avenue, in the city of Pico Rivera, California. It consists of a green room, makeup room, production office, and multiple constructed sets that serve as a police station, office, psych ward, courtroom, bar airplane, and a green screen, among others. Victoria Cruz, who plays the role of a Correctional Officer in the movie, shared a picture featuring herself, Christian, and the film’s directors Devon and Kenny!

Here’s a behind-the-scenes picture shared by producer Valentina Bove with the technicians and artists belonging to the technical and art department of the movie. She also shared a heartfelt caption, thanking her crew. “Leadership is about inclusion. As a producer I would be nothing without my crew. Their voice matters,” Valentina wrote.

Check out the shot of Wolfgang Weber, who essays the character of Logan in the film. “Things get pretty… Ruthless,” he wrote in the caption. Of course!

Lily Anne Harrison’s stunt double Sunny Tellōne, took to Instagram to share her experience of working with the leading ladies Christie and Lily. Along with the picture, she wrote, “I had a great time working with these ladies. Could not have been more fun and I can’t wait for more.”

Christie Burson leads the cast as Meg, the obsessive and ruthless realtor. You may recognize her as Mary from ‘Destroy the Alpha Gammas’ and other TV movies like ‘Night Nurse’ and ‘Deadly Lessons.’ Brian Ames essays the character of Ralph Savage. He is best known for his role in ‘Awkward’ and ‘Westworld.’ ‘The Craft Store’ fame Lily Anne Harrison appears as Ralph’s wife, Annie Savage.