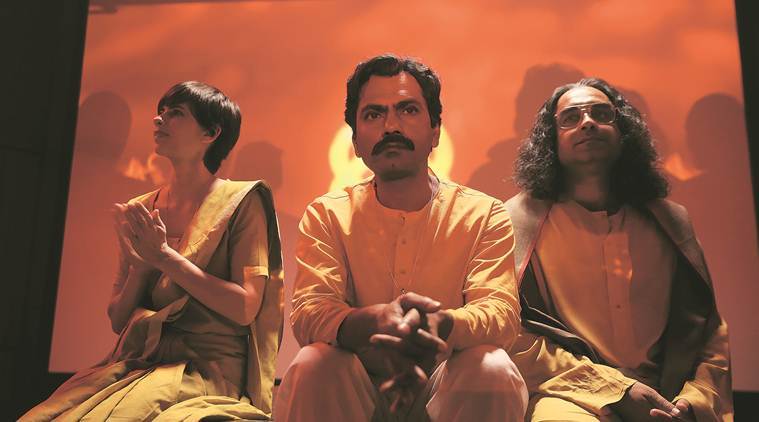 Episode 7 of ‘Sacred Games‘ Season 2 shifts its focus from the main characters and brings light upon two secondary protagonists who have always been lurking somewhere in the background. Compared to all the other episodes in this season, the tone of this one is relaxed. With no explosive scenes, episode 7 might seem a little lethargic to many, but don’t fool yourself into believing that it is anything less than brilliant. This episode is especially significant because we become aware of the origins of Guruji and how he turned into the psychopathic mastermind.

Apart from that, I’m sure that just like me, many of you were still hoping that Sartaj’s father would somehow not be a part of the whole “Kalyug” group. His relationship with the whole group is also revealed in this episode and Batya even uses this to manipulate Sartaj into believing in their motive. But for some strange reason, the cause of his death still remains unknown. Overall, the episode successfully lays the platform for an explosive finale.

Gaitonde finally gets to meet Guruji and starts to question his beliefs and ideals of destroying the world to create a new one. This is when Guruji drugs him again and tries to manipulate him into believing that he is “Brahma”. But Gaitonde gets extremely carried away by this and ends up killing Guruji. Meanwhile, Parulkar is confronted by his senior officers for his involvement with Isa. When he realizes that he’s in deep trouble because Isa seems to be working for Shahid Khan, Parulkar tries to put the blame all of it on Tripathi. But Tripathi then throws a curveball right back at him by claiming that he’ll strip his police uniform and completely ruin his life.

Gaitonde slowly starts to lose his mind and is also able to hear Guruji’s voice in the back of his head. This is when Guru Ji starts reciting the story of his childhood where he was extremely sharp and his parents considered him to be an avatar. Even as a kid, he seems to be quite bright for his age and is also able to judge people with ease. After his father is taken away by the police, something inside him dies and that’s the time when he realizes that he needs to change the world in some way. This idea grows stronger in the back of his head and that’s how he later becomes Guruji.

Even Dilbagh’s backstory is revealed where initially he seems to be a little reluctant about his decision of supporting Kalyug. But later he comes to terms with it and chooses to support it. Batya uses this to convince Sartaj that he must do something to bring back their Granth that has been stolen by Gaitonde. After stealing Gaitonde’s evidence from the police department, Sartaj gets some leads on whereabouts of the granth through the movie that he had made ages ago.

He then gets Gaitonde’s father’s address from Yadav’s diary and that’s when he finally finds the Granth at Ganesh’s father’s home. He then contacts the “Satyug” cult who take him to a far off bunker. Thankful for everything he did for them, Batya touches his feet and offers him a place with them. As she hands him over a white kurta, which is more like their uniform; the credits start to roll and we’re left with yet another cliffhanger for the finale.

The second last episode of the season is more of a slow burn than a grand preparation. The backstories that it presents are quite interesting but after all the build-up from the last scene of the previous episode, this one comes off as a bit of a buzz kill. With almost no scintillating visuals or violent bloodshed, the episode takes a simplistic approach towards storytelling and it probably does so to prepare you for what lies ahead.

Even though the episode reveals its cards slowly, I would advise everyone to not skip any part of it because of the significance of the events that transpire. When it comes to the final cliffhanger, you’re again left wondering if Sartaj is now trying to stop the blast or he has given in to the ideas presented by Batya. What’s really impressive about this episode is its use of Gaitonde’s movie as a clue which previously seemed to be nothing but a tool to insert comic moments. Not to mention, Nawazudin’s portrayal of all the insanity that’s trapped inside him in the opening scene is just phenomenal. Arguably, the best acting you will see all season.