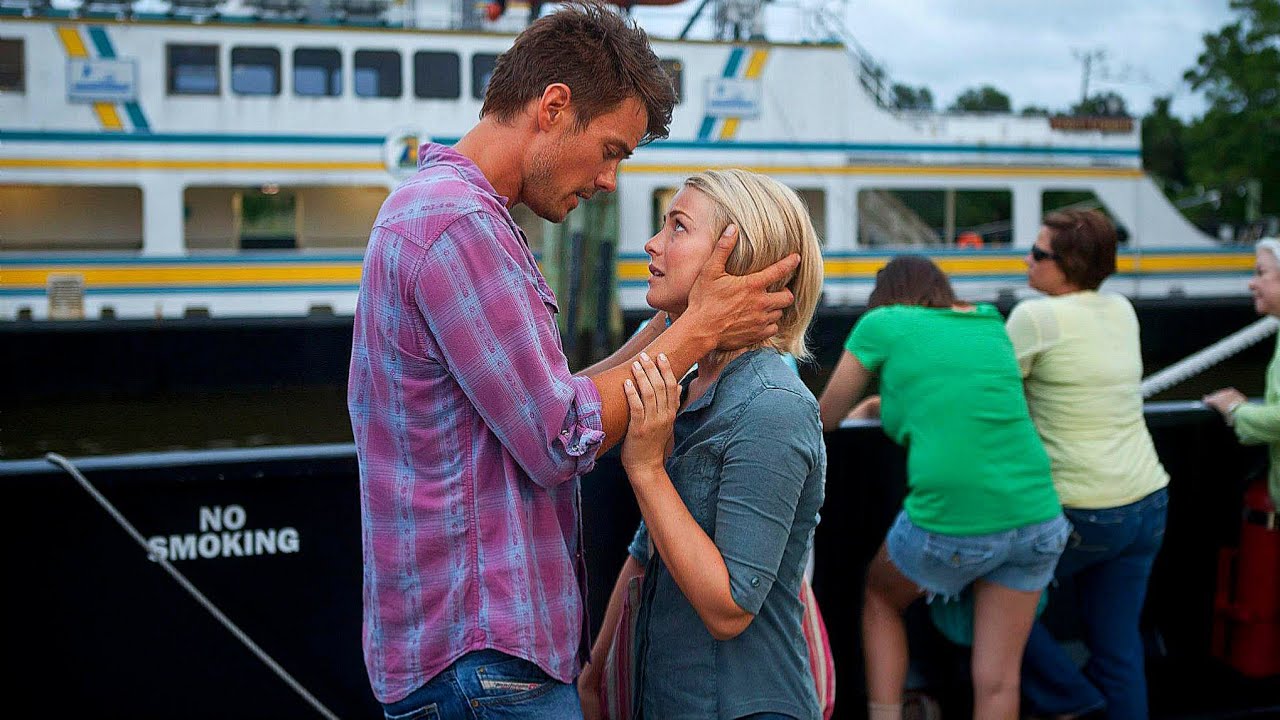 Based on the best-selling novel of the same name written by Nicholas Sparks, ‘Safe Haven’ is a romantic-thriller film directed by Lasse Hallström. The film stars Julianne Hough, Josh Duhamel (‘The Lost Husband’), Cobie Smulders (‘Stumptown’), and David Lyons in the lead roles. It follows the story of a woman who changes her identity and moves to Southport, North Carolina, to escape her abusive husband. She builds a new life for herself with her boyfriend, Alex. The film delivers a genre-shifting twist in its closing moments that will surely leave viewers baffled. If you are looking for explanations about the ending of ‘Safe Haven,’ here are all the answers we have. SPOILERS AHEAD.

The film begins with Erin hurriedly leaving her house in Boston. After briefly staying with her neighbor, she goes to a bus station and boards a bus heading to southern America. On the road, she gets down at the small town of Southport, North Carolina. She decides to stay in Southport and adopts the name of Katie. Katie gets a job at a local diner as a waitress and rents a small cabin by the woods. 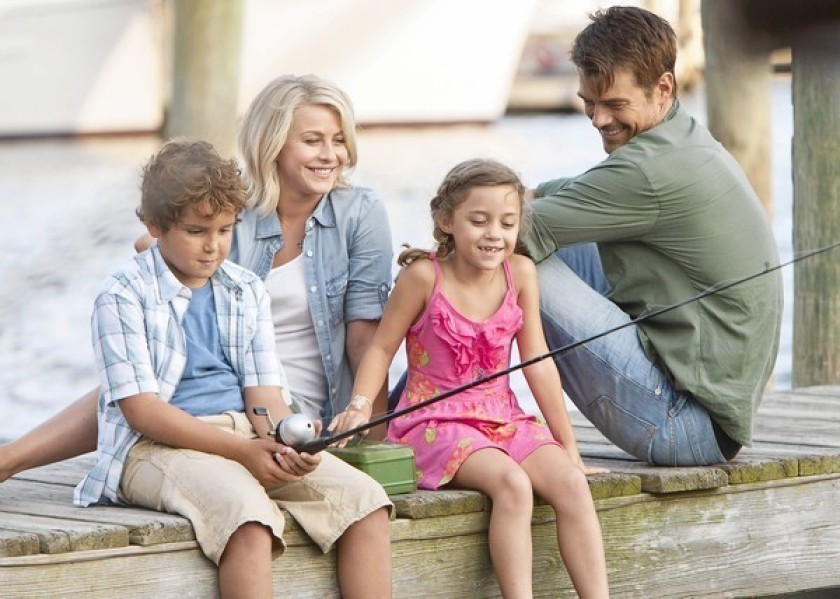 She soon meets Alex Wheatley, a widower who runs the local general store. They strike an immediate rapport and become friends. Katie also befriends her neighbor, a lonely woman named Jo. She spends some time getting acquainted with Alex’s two kids, Lexie and Josh. Alex gifts Katie a bicycle so she won’t have to walk to get herself across town. Katie sees this as a favor, and they have a small argument, but she realizes that it was a romantic gesture. Not long after this, she starts dating Alex and becomes a mother-figure to his kids.

All is great until Katie’s past catches up with her, and Alex finds out about it. It turns out that Katie is a woman wanted for murder and is being hunted down by a cop, Kevin. Katie explains she did not kill anyone and was only trying to escape from her abusive husband. Alex doesn’t believe Katie and breaks up with her. However, when Katie decides to leave the town, Alex stops her and admits he is in love with her. It is revealed that the cop searching for Katie is her abusive husband and has framed her to find her. He soon learns about Katie’s whereabouts and arrives in Southport to take her back. How Katie frees herself from Kevin and unites with Alex makes up for the film’s enthralling climax.

Safe Haven Ending: Do Katie and Alex Start a Life Together?

Towards the end of the film, Kevin confronts Katie and forces her to come with him. He holds Katie at gunpoint and pours gasoline over the store, threatening to burn it down. Katie evaluates the situation and feigns sympathy for Kevin, causing Kevin to calm down. Katie sees the opportunity and pushes Kevin into the water. But before she can reach Lexie, a firecracker spark from the Fourth of July celebration lands on the gasoline and engulfs the store in flames. Lexie is stuck inside as Kevin re-emerges and attacks Katie. Alex arrives in time and rescues Lexi just as Katie shoots Kevin with his gun while grappling to free herself from him.

When the smoke settles, Alex recollects letters stored in a safe in the now burned-down store. He explains to Katie that his wife wrote down the letters before passing away for the big moments in her children’s lives. He hands Katie a letter addressed “To Her.” Upon reading the letter, Katie learns the letter is meant for the next woman Alex will love after his wife, which is Katie. She finds a photograph in the letter’s envelope and realizes that Alex’s dead wife, Carly, is the woman she knows as Jo.

Before we talk about that shocking reveal, let’s look at how the ending impacts Katie and Alex. When we first meet Katie, she runs from her husband and seeks a place she can live without the fear of her husband finding her, sort of a “Safe Haven,” if you will. Alex is trying to run the general store and his family all by himself after losing his wife. Both characters are essentially looking for a fresh start. However, they are unsure if they can truly ever be happy again, until they meet each other. Despite falling in love and committing to each other, they are not yet ready to start a life together. Both are still clearly trying to deal with their past. We see that Alex still grieves his wife, and Katie still lives in fear.

The ending closes the past chapters of the couple’s lives. Katie is finally free from her abusive husband. By giving Katie the letter written by Carly, Alex also puts his past behind him. Katie and Alex are finally ready to start a life together. The two lovers can now look to the future, which looks hopeful for them now that they are with each other. We get a scene of Alex, Katie, Josh, and Lexie, now a complete family, on a boat headed for a picnic. Carly’s expository letter beautifully explains Katie’s role in completing the family. The story begins for Katie and Alex, with each facing circumstances that make living difficult for them, and ends by highlighting the thing that makes life worth living: love.

What Happens to Jo?

The ending implies that Jo is the ghost of Carly looking over her family and Katie. In retrospect, we realize that the hints of Jo being a mystical entity are present all along. In the moments between Alex retrieving the letters and giving Katie the letter, we see Katie bid farewell to Jo, who is moving away. This makes the twist-ending all the more hard-hitting and allows the film to end on a high note, despite the glaring plot holes created by the reveal. Jo didn’t move away but moved on into the afterlife, knowing that Katie is there to take care of her family. It is a poetic moment immersed in romanticism and symbolizes the hope love offers in life.

What Does Jo Want?

When Katie first meets Jo, we can sense a striking similarity between their personalities, which helps them connect instantly. As the film progresses, we do not learn any valuable information about Jo’s past. This makes us wonder if, just like Katie, even Jo has a past she is running away from in search of a fresh start. The ending of the film proves this to be somewhat true.

The entire film is based on the theme of second chances. Katie gets a second chance at true happiness and love after meeting Alex. Similarly, Jo is also looking for a second chance, not for herself but her family. Through her letter, it is evident that Jo wants the next woman who comes into Alex’s life to complete her family by taking her place and provide her husband and kids with the second chance they deserve at love and family.

As Jo herself states, she is already gone but hopes to be with her family, watching over them as they make a fresh start. Her love for her family manifests in the form of a mystical entity/ghost that Katie can see. She guides Katie through her times of need, and eventually, both women help each earn what they both want – a second chance.