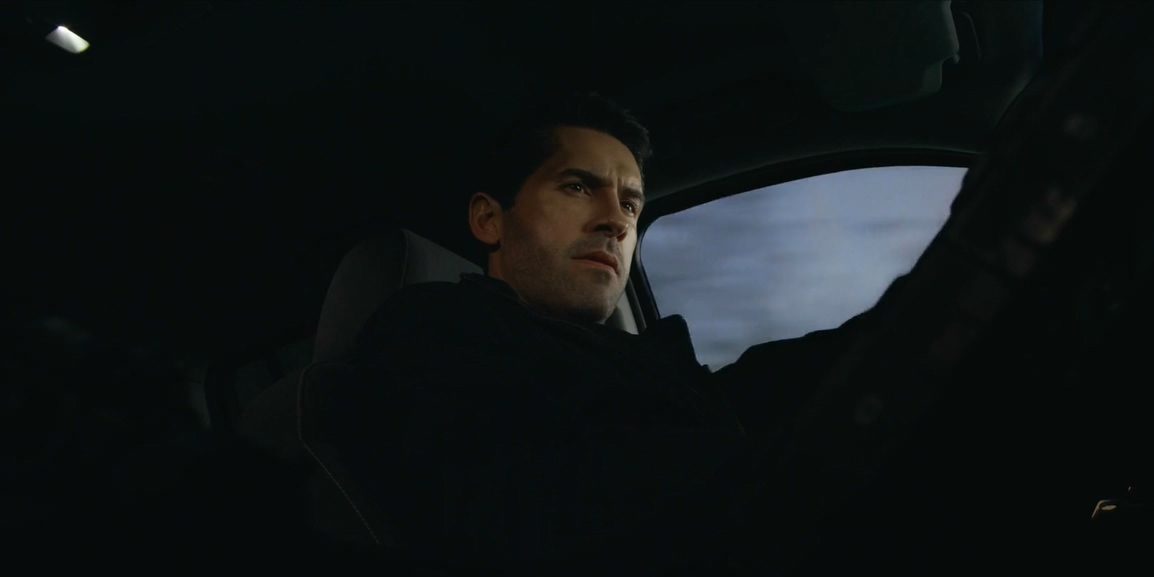 Director Isaac Florentine and actor Scott Adkins team up to deliver an action-packed venture of hair-raising tension in the 2020 direct-to-video action thriller ‘Seized.’ The story follows Richard, aka Nero, who is forced to resort to violence following the kidnapping of his adolescent son. As he unleashes chaos and raises hell, the streets of Baja California turn bloody, and cartel leaders drop dead.

However, can Nero get his son back? Apart from Adkins, Mario Van Peebles delivers a strongly personable act. Despite the shaky camerawork and predictable plot progression, the movie proves great value to genre fans. If you seek to recollect the film’s final scenes, let us brush up on our memory. SPOILERS AHEAD.

English ex-pat Richard lives with his adolescent son Taylor in a beachfront house in Rosarito, Mexico. Richard gets a call from Taylor’s principal about him starting a fight in the school. Upon confronting Taylor, Richard learns about Taylor being bullied and that the other kids call him an orphan. After the death of Richard’s wife, the father and the son go through a challenging phase. Despite Richard’s warning that violence rarely solves anything, Taylor watches the YouTube tutorials of Ginger Ninja Trickster to learn how to throw a punch. 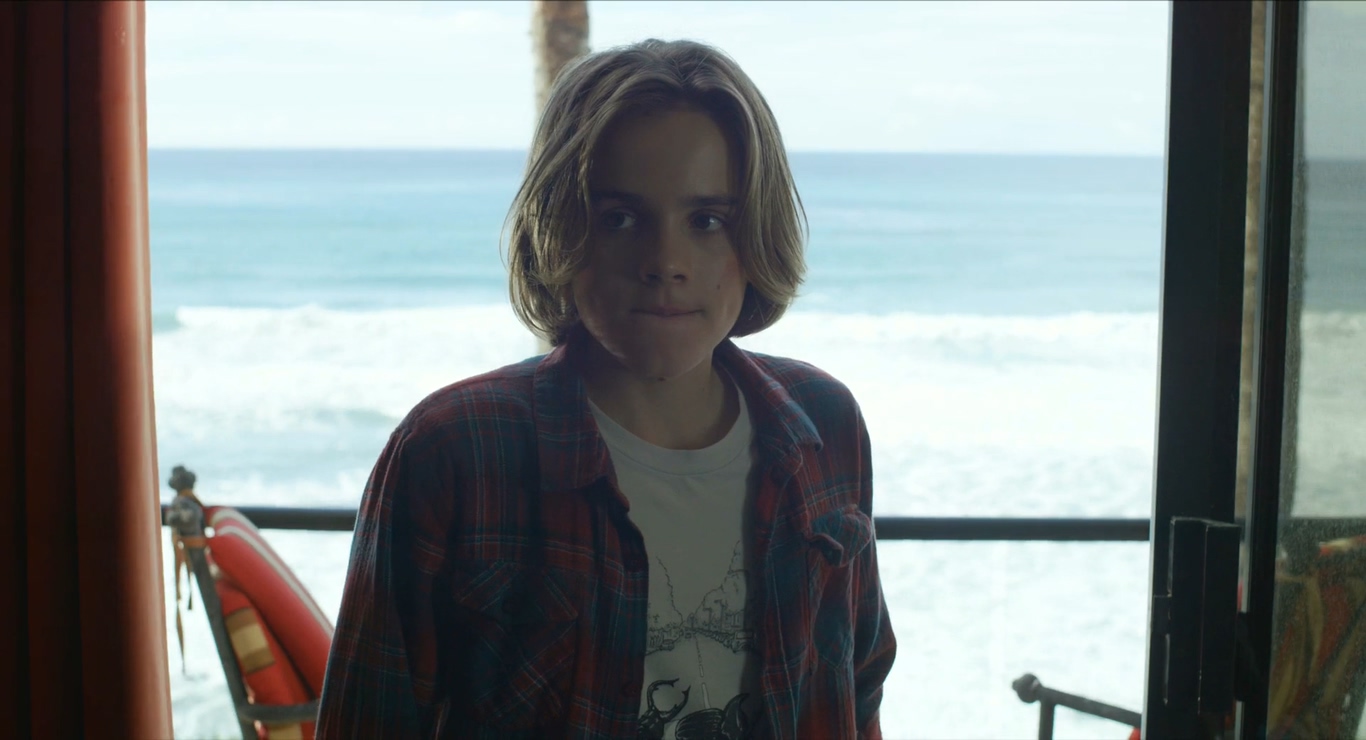 The salesperson for a security agency, Richard is a strict single parent, but he loves Taylor more than the world. While napping in the afternoon, Richard gets ambushed with a poisonous dart on his neck. When he wakes up, it is seemingly too late since Taylor is missing from his room. Richard receives a call, and the stranger on the other side of the phone admits to kidnapping Taylor. The stranger sends Richard a video feed, where he sees Taylor being held in a truck at an undisclosed place.

While time keeps ticking, the insides of the truck are filled with carbon monoxide, a lethal gas that may kill Taylor. We also come to know that Richard has a bloody past as former intelligence officer Nero. The stranger needs him for a dirty job, and with the revelation, Nero goes to the garage to pick up a package. The supplies comprise a bulletproof vest modified with a hidden cam, a weapons crate, and a bulletproof Chevrolet Suburban. With his back against the wall, Nero sets out on a killing spree to save his son from the thugs.

Seized Ending: Who Is the Stranger on The Phone?

A gruesome mob boss kidnaps Taylor and gives directions to Nero over the phone. After getting in the car, Nero gets his first coordinates, which seems to be a hotel in Garza territory where the Roja Cartel and the Garza Cartel members are trying to come to an agreement. Nero is asked to kill them all, and with some usual kicking and screaming in the kitchen, the hotel becomes the site of a massacre. 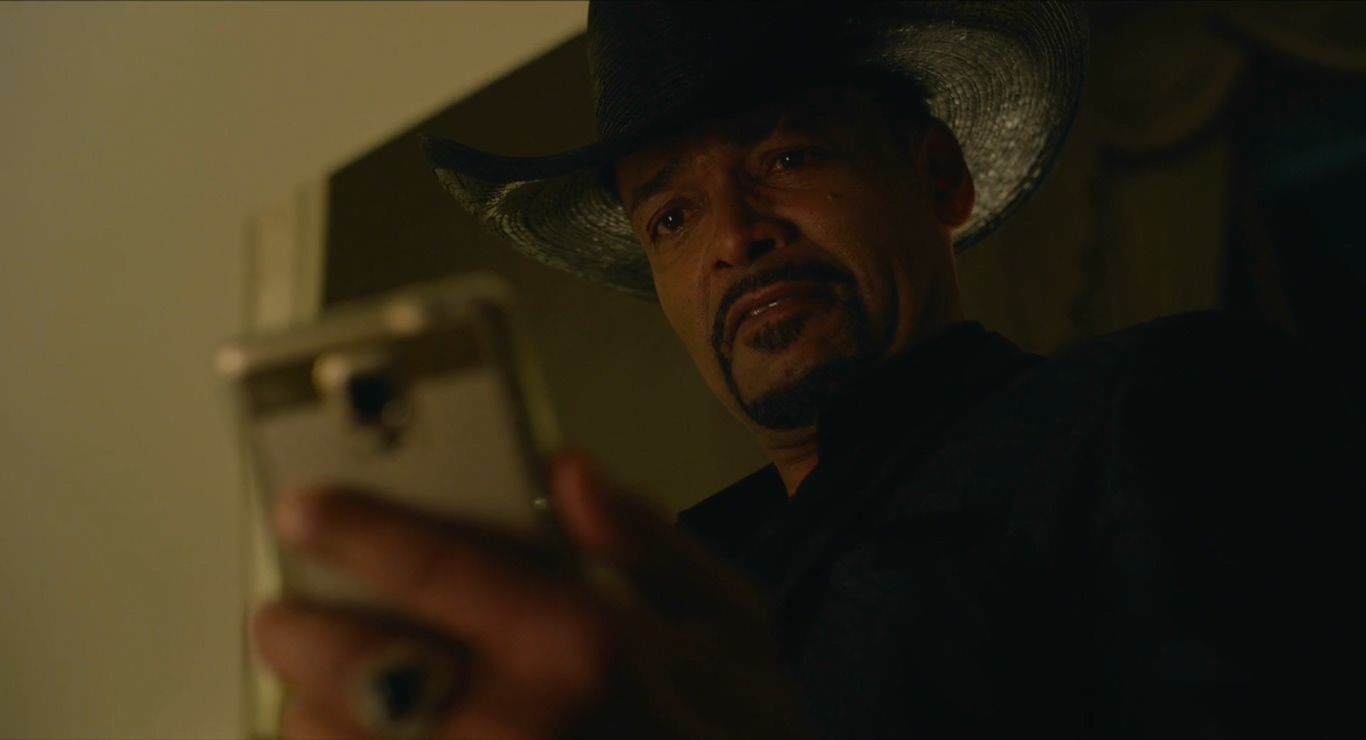 Nero successfully pulls off the first mission, but he does not know the stranger. However, the stranger is seemingly a man of principles. While they speak about trust, Nero’s second target is revealed to be Machado, a mob boss notorious for sex trafficking, racketeering, and especially a bombing incident in Juarez. He is currently having a party at the VIP room on the third floor of a heavily guarded strip club, a party that Nero is compelled to crash. Before killing Machado, Nero lets Machado speak to the stranger to see if Machado can recognize the voice.

However, Machado cannot recognize the voice. Nero is pressed for time and has to pull the trigger. Much like Machado, Omar Chavez, the third target, does not have a clue about the person pulling the strings. He initially blames government agencies such as the CIA or MI6 for the series of attacks. The audience, however, has seen the guy with the black sombrero who is behind all this. When Nero says that the person speaks a lot about trust, Omar concludes that the kidnapper of Taylor is Mzamo Lascano.

Mzamo is the only person with the guts to pull off a suicidal mission like this. Mzamo is trying to rule over the turfs as the undisputed cartel leader and thus wants other (worse) cartel leaders to be taken care of. Omar spills that Mzamo has a villa south of Playa La Mision. As Nero receives the valuable piece of information, Mzamo’s men break into the premises of Omar’s house while Nero rushes to retrieve his son.

Is Taylor Safe? Is Donovan Dead or Alive?

The kidnapping of Taylor propels the story forward. After the first mission, Nero is eager to talk to his son, but Mzamo assigns him another job. On the way out of the crime scene, Nero and Taylor have a contentious conversation. Taylor asks if the kidnapping is related to his mother’s death, and Nero has to tell him that Taylor’s mother was the victim of a similar kidnapping incident. A person within the agency betrayed Nero. 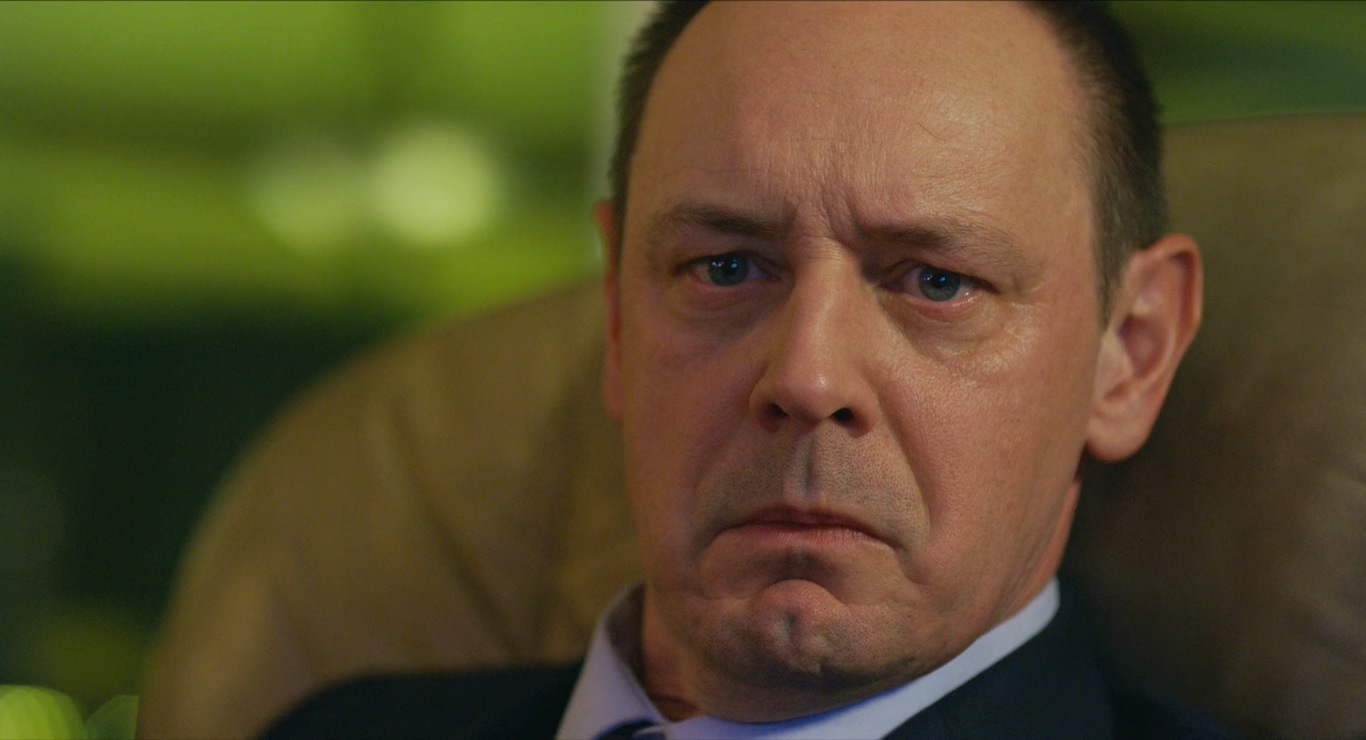 The bad guys ended up killing her, while Nero hunted the perpetrators down and exacted revenge. However, he could not find the rat who betrayed him. As his actions violated the agency’s rules, Nero was removed from duty and sent to Mexico to start a new life under a new name. The call is then disconnected while Nero receives the following coordinates.

The third target, Omar Chavez, is an infamous cartel leader involved in human trafficking and international arms dealing. This one, as Mzamo warns Nero, is a bit tricky. Nero has to pull out all the big guns to return unscathed from this mission. Donovan, a previous co-worker of Nero (who suggested the name of Nero to Mzamo for the job), meanwhile shudders from fear that Nero is going to come after them if something happens to Taylor.

Taylor does not trust Mzamo when the mob boss comes to deliver him the sandwich. Taylor cuts his ties, escapes the truck, and is taken to a safe position by Mzamo. During the confusion at Omar Chavez’s place, Nero is presumed dead. Donovan tries to convince Mzamo to tie the loose ends – he is hinting that Taylor should be killed. However, as a man of his words who dreams of providing education to his people, Mzamo is not a killer of children.

On the other side, Nero puts up a show of tremendous strength and agility, beating up Omar’s men. After freeing his hands, Nero proceeds to kill Omar with Omar’s own decorated pistol. After getting the whereabouts of Mzamo from Omar, Nero goes to settle the score. He climbs a pole and stealthily gets into the premises of Mzamo’s villa. After a tense confrontation with Donovan, Nero becomes certain that this was the person in the agency who betrayed him. 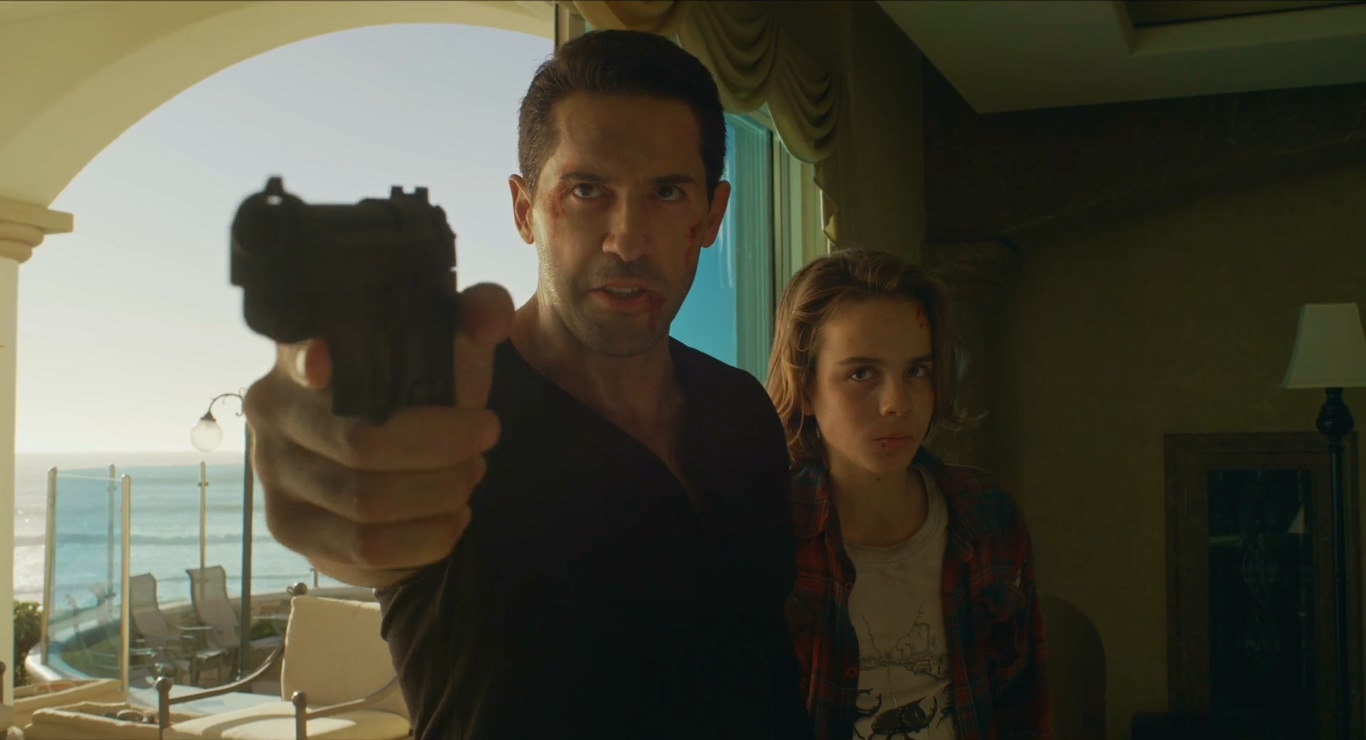 Nero shoots Donovan dead and, with some help from Mzamo and his wife Alanza, takes out the remaining intelligence officers. After the mayhem, Mzamo reunites Nero with his son. The mob boss promises to leave the father and the son in peace, and Nero keeps the gun in his pocket. The final scene catches Nero and Taylor driving away on a Harley, and we can assume that they are safe from harm.

Read More: Is Seized Based on a True Story?