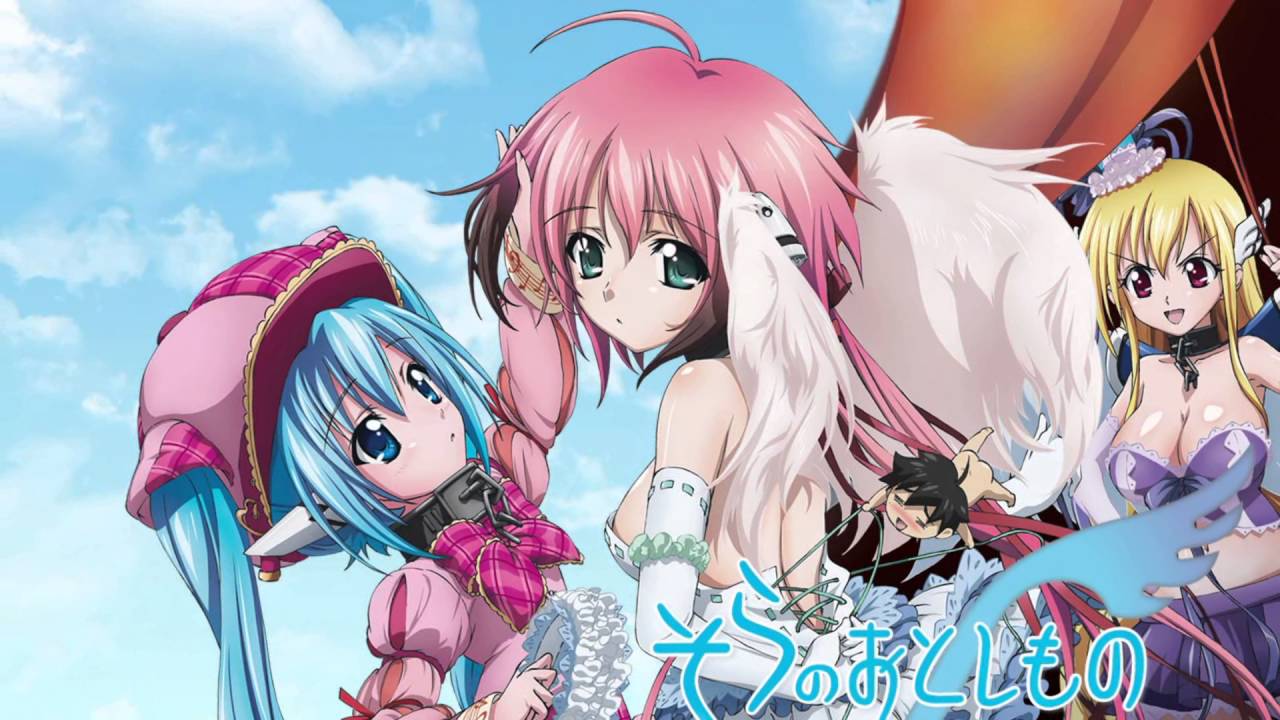 When I first started watching ‘Sora no Otoshimono’, I expected it to be a serious fantasy anime with maybe a few hilarious moments here and there. But as soon as I started watching it, not even one moment went by when I couldn’t stop laughing at how mundane and hilarious everything in it was. Who can even come up with the idea of flying pantsu (underwear)? And if that was not enough, we have people throwing pantsu on each other…exploding pantsu and whatnot? This is exactly what the comedy of ‘Sora no Otoshimono’ looks like. Now I have a habit of laughing at the silliest of things, so I thoroughly enjoyed the entire show. But those who have a hard time digesting brainless humor, might end up being disappointed.

When it comes to the characters of the show, it becomes clear right from the start that they are going to be nothing but your generic ecchi characters where you have a main perverted protagonist, a neighbor and a childhood friend who is secretly in love with the protagonist. Even when it comes to the designs of the characters, there is nothing groundbreaking about it. Still though, for an ecchi anime, the designs are quite good. Surprisingly, the character development is far better than what you would expect, especially the four main characters who by the end of the show have a whole lot of depth to them.

In all honesty, this was the first time I heard about the AIC A.S.T.A Studios but to say that I found the production value to be really impressive would be quite an understatement. I absolutely loved the animation of the show and for me, it was the ultimate selling point. The animation remains consistent throughout the show and all the transitions from one scene to another are very fluid. Even the character movements are very subtle and if you are an ecchi fan, then it’s probably the best you’ll see in the genre. Even the animation during action scenes is not at all disappointing. AIC A.S.T.A surely deserves a lot of appreciation for what they have done with this show and it actually makes me want to watch their other shows as well.

I have never really been a big fan of ecchi in general but ‘Sora no Otoshimono’ proved to be an absolute game changer for me. Apart from the comedy of the anime, I was very much moved by the emotional scenes as well. And though the whole show is full of typical ecchi humor, all of it is backed up with a pretty decent storyline. Most of all, each season of the anime barely has 13 episodes, so you’re not making much of an investment into it. On a lazy Sunday afternoon, just turn this one on and start bingeing. I can assure you that it will turn out to be a lot more than you could ever ask for.

Sora no Otoshimono Season 3 Release Date: When will it premiere?

Back in the day, when the anime was really getting popular, it was officially announced that it will be having a Season 3. But soon after that, it was claimed that instead of a Season 3, the creators will be coming up with movies to conclude the entire series. Now those who have seen the anime till the end will know that the last movie closes on a very conclusive note, leaving almost no loose threads hanging. This means that  ‘Sora no Otoshimono’ is completely over now and there are no hopes of getting anything more out of it. And by now, it has reached a point where even the fans are starting to forget about it. So for those who are still hoping for a new season of ‘Sora no Otoshimono’, it’s about time you move on to something new. If anything changes, we will update this section with ‘Sora no Otoshimono’ season 3 release date.

You can stream ‘Sora no Otoshimono’ on Crunchyroll with its original Japanese audio and English subtitles.

‘Sora no Otoshimono’ revolves around Tomoki Sakurai, who keeps having this dream about an angel and every time he wakes up from this dream, he has tears in his eyes. For obvious reasons, one of his childhood friends named Sohara Mitsuki gets really concerned about this and decides to help him out by seeking out an eccentric sky maniac named Eishirou Sugata. He claims that all these dreams that Tomoki has been having are somehow connected to the New World, which is basically a floating anomaly that still confuses the scientists.

Eishirou forms a club called New World’s Discovery and later schedules a meeting with Tomoki in order to observe the mystery in the sky. On this day, everything Tomoki knew about the world changes when a girl comes falling down from the sky and as soon as she lands on the surface of the Earth, she looks at him and calls him her Master. From this point on, the New World’s Discovery club sets out on a journey to understand the mysteries behind the fallen angel and everything about others of her kind who have arrived on Earth.

Season 2 of the show follows the adventures of Tomoki all over again and this time around, he has settled down with two angeloids. But he still keeps having those weird dreams, so he asks his friends to investigate the reason behind these. The club discovers that there is something seriously wrong with his dreams this time, as a meteor comes crashing down on the Earth and a new angeloid character arrives. The two movie adaptations that were released after this are based on the Kazane Hiyori’s arc of the Manga. 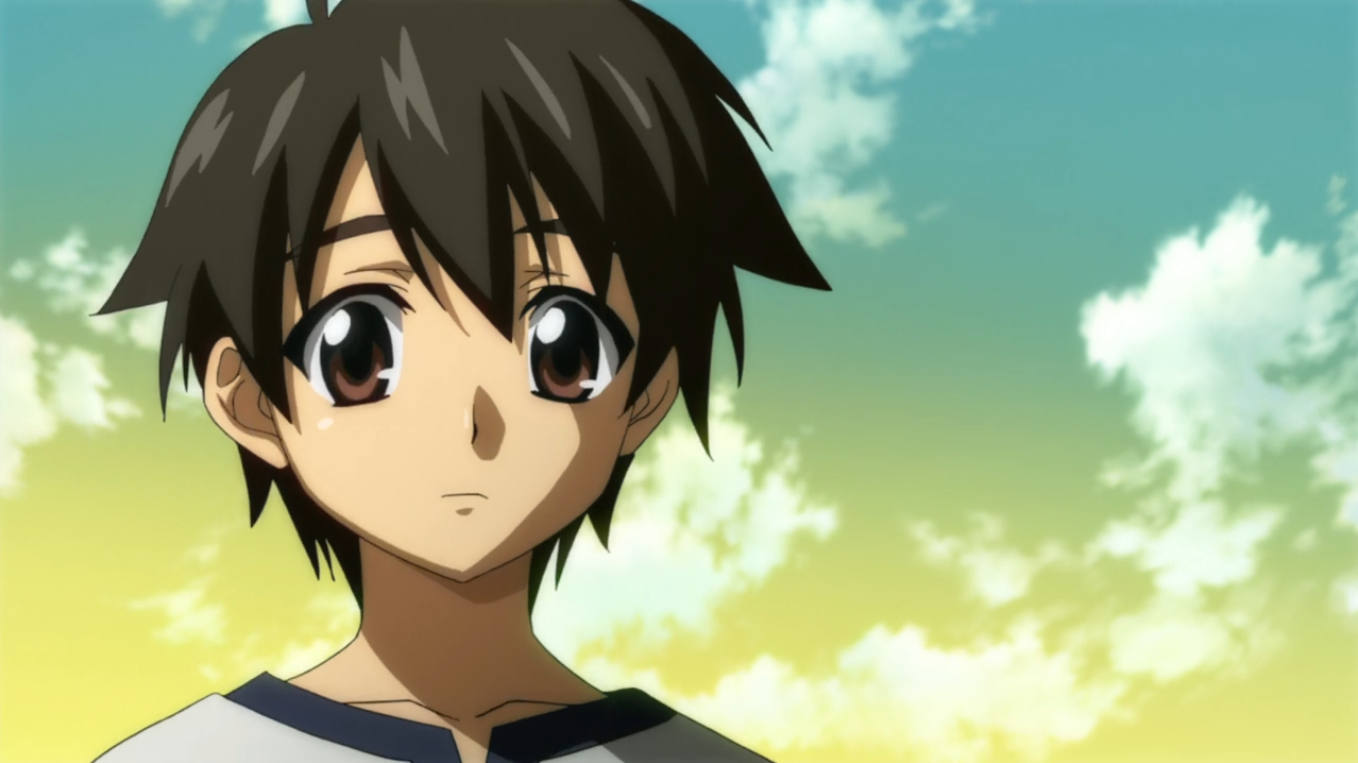 Tomoki is the main protagonist of the show, who is mostly known for his perverted endeavors. But apart from that, he is also a very nice person at heart and often goes out of his way to help the angeloids. At some point in the series, Tomoki shows feelings for Ikaros, Nymph and even Sohara. But Ikaros just has a special place in his heart and he even kisses her once. Ikaros is also madly in love with him but he fails to notice it for a very long time. He does not even realize that he is the center of one very complicated love pentagon that includes Ikaros, Sohara, Nymph and also Astraea. To everyone’s surprise, he later mans up and confesses his feelings to Ikaros and when he finds out what the other angeloids feel about him, he is beyond surprised that he didn’t notice it till that point. 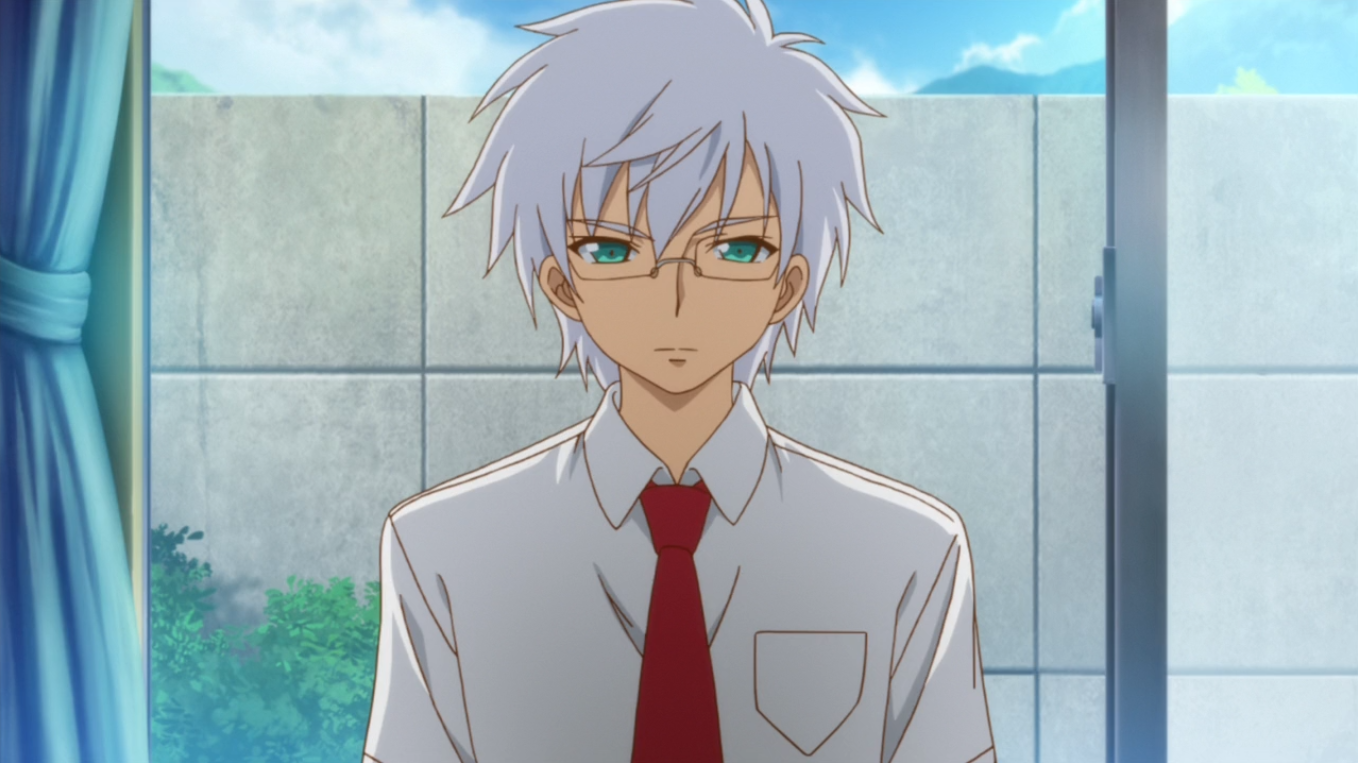 Eishirou Sugata is Tomoki Sakurai’s friend who is also the founder of The New World Discovery Club. He is a tall young boy who looks very old and wise for his age with his delicate white hair and bluish green eyes. He wears his school uniform all the time and sports rectangular glasses. His face always has this bland neutral expression at all times and it’s very hard to judge his emotions. He is also a self-proclaimed scientist who is currently researching on Angeloids and Synapse with the help of Nymph. Eishirou’s level of intellect is so high that even the sky master himself is impressed by it.

When it comes to special powers, Eishirou doesn’t really have any. But he knows how to harness and function the most complex pieces of technology. Using his high level of intelligence, he is also able to come up with various theories and ideas to explain things that others on the club have no clue about. Apart from his intelligence, Eishirou also shows great fighting skills and even manages to take down a full grown bear when all of them go camping. 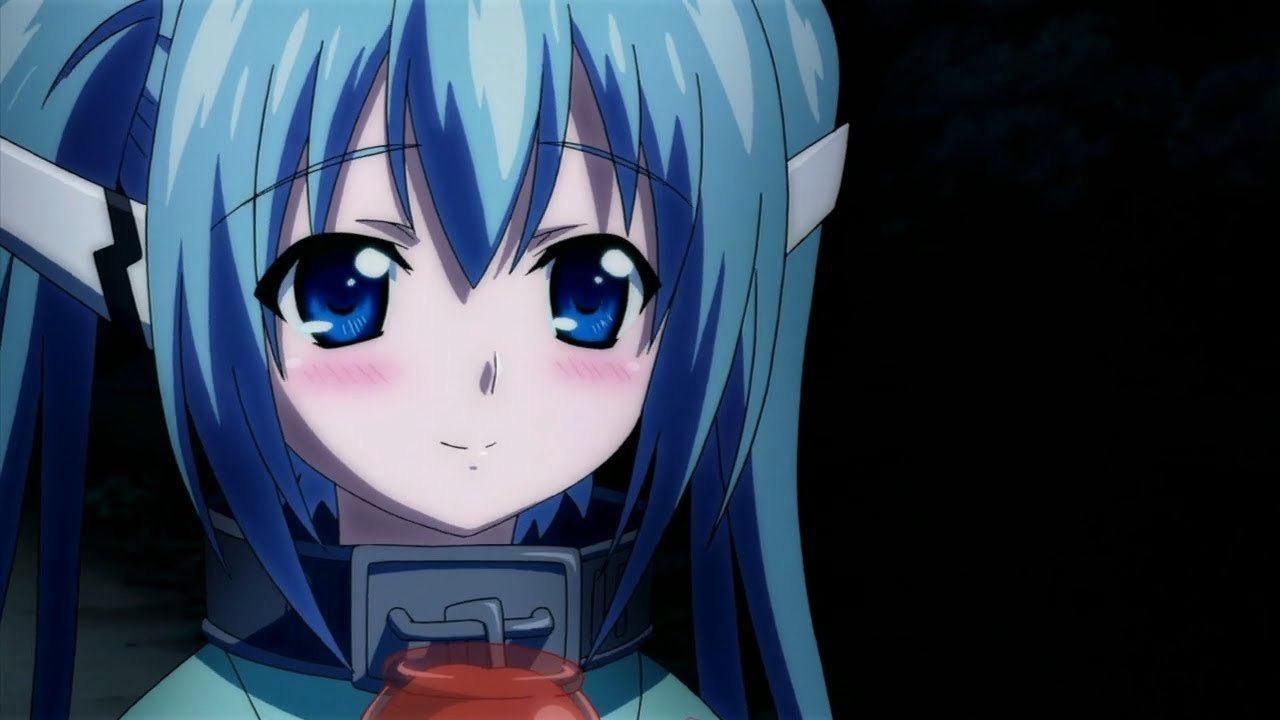 Nymph is an Electronic Warfare Angeloid Type Beta, who mysteriously appears at Tomoki’s house one day. She has long blue hair which is styled in two pigtails with bangs that cover her forehead. More often than not, she feels that she’s very superior to humans and often refers to them as bugs. Initially, she is sent to Earth to find Ikaros and send her back to the Synapse but she is not strong enough to do so. Like all the other angeloids, she also falls for Tomoki later and openly confesses her feelings for him. She even betrays her master at the Synapse to help Tomoki and also to show him how much she likes him. Nymph also enjoys eating a lot and is often seen snacking on either some sweet delicacies or on a bag of potato chips. There are times when she shows her extreme dark side by not showing any remorse towards people who she thinks are inferior to her.