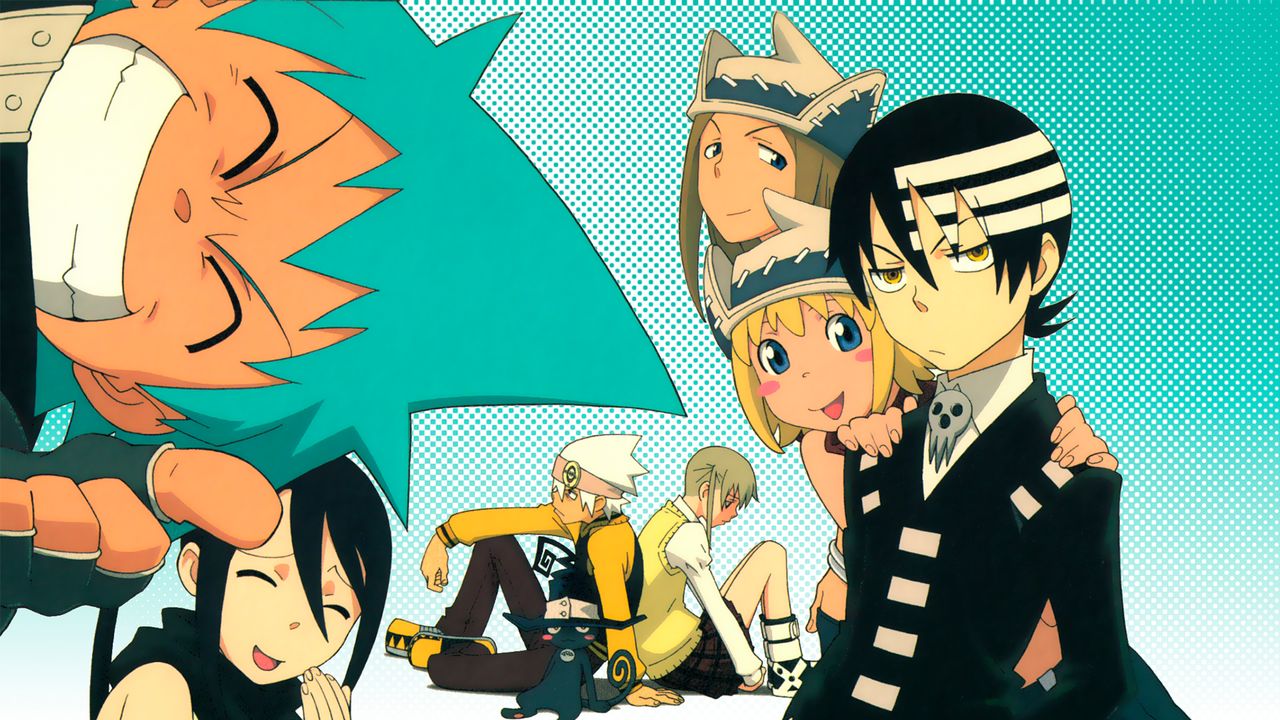 Over the past few years, action-centric shounen anime have developed a common theme that involves bright character personalities and vibrant background colors that never seem to fade away. Even during the most serious moments of the anime, these colors remain how they are and maintain a constant radiant pallet. All of this looked great when it was initially applied to anime like ‘Dragon Ball‘, but its constant use has made this format of shounen extremely boring. Even ninjas nowadays in these series are not seen wearing the traditional black outfits because it might affect the whole happy, feel-good vibe of the anime. This is exactly what places ‘Soul Eater’ above all the other sheep in the crowd of shounen anime.

If you look at most other anime of this genre, their emphasis on fan-service goes on increasing with time. The bust size of the female leads magically begin to grow and even their screen presence is often doubled after a while. ‘Soul Eater’ refuses to take this route and though it does have its own share of fan service moments that sporadically appear during the first half of the show, it completely avoids bringing in even the slightest of ecchi in the second half.

The plot is something that I wouldn’t describe as entirely repetitive, but it still cannot be considered unique or inventive. For a good amount of time, the anime follows a standard shounen plot and from what I know, till this point, it actually follows the source material. Like many other anime series, this one was released when the manga was still in publication. But unlike most of the other shows, ‘Soul Eater’ does not abruptly announce a hiatus waiting for a new manga to release. It does not even direct you towards a “Read the Manga for more” ending; instead, it picks up an original story right where it leaves the manga and continues to fascinate you even more than it did before. But considering the execution of the ending of the season — without giving out any spoiler — I would just say that it could’ve been better. It is no way sudden but I wouldn’t call it subtle either.

So to put it simply, ‘Soul Eater’ is the kind of anime that allows you to enjoy the elements of your typical shounen along with some fresh and unique segments of its own. If you keep an open a mind to it, you might even enjoy it more than other long running shounen like ‘One Piece’ or ‘Naruto‘. Ignore the people who have been complaining about the lack of originality because I am yet to find another show that is entirely similar to this one. Every action anime lover must at least once give this series a try; I can assure you that it will change your entire perception of the entire genre.

Soul Eater Season 2 Release Date: When Will it Premiere?

‘Soul Eater’ season 1 released on April 7, 2008 and it came to an end on March 30, 2009 after featuring a total of 51 episodes. ‘Soul Eater’ season 1 was only loyal to its source material half-way through the series. Which means that after about 30-35 episodes, the anime was forced to take its own path because the manga was still in the process of being completed. This has proven to be a good thing for the show in the short run but a big negative in the long run.

Back then, Bones Studio made a wise decision to come up with an original story after they were done with the manga and this surprised many fans because anime shows don’t usually do that. But after all these years, we haven’t really had a new season of ‘Soul Eater’ and that’s mainly because the anime ended up going in a direction that was entirely different to the manga. Continuing the original anime story would be too much of a risk and could lead to the series’ downfall. So by now, it’s pretty obvious that we won’t be seeing a new season of this shounen.

Hollywood has never been shy about resurrecting old TV shows and anime. In fact, the industry seems to be running on these right now. Inspired by the west, even the Japanese are starting to catch up with this trend and famous anime like ‘Sailor Moon’ and ‘Dragon Ball Z’ have been getting their own remakes of some sort. Not to give you any false hope, but ‘Soul Eater’ might get a reboot like most other popular anime that came out earlier this century. It’s been almost a decade now since it first premiered, so the fan base might have trickled down a little. But even then, you never know, Bones Studio might just give it another shot with a remake that’s more loyal to the manga than the first one. As soon as we come to know about ‘Soul Eater’ season 2 release date, we will update this section.

The English Dub of ‘Soul Eater’ Season 1 is available on Netflix, Funimation, and Amazon Prime.

‘Soul Eater’ revolves around an academy located in the Death City, headed by a Shinigami, who is the God of Death himself. The academy’s main motive is to raise “Death Scythes” who can later help the Shinigami fight the evils of the world. These “Death Scythes” are not physical weapons but are actually human/demon hybrids who can change their bodies into Demonic Weapons. But they can only do this after they have consumed the soul of 1 evil witch and that of 99 other evil beings. ‘Soul Eater’ depicts the lives of the students who belong to the Death Weapon Meister Academy and follows their journey into becoming “Death Scythes” from the “Demon Scythes” that they already are. It portrays the lives of the students as they take on intense missions to get hold of the souls of all the evils that lurk around them in order to protect their city and also to get a chance to be the Demonic Weapons of destruction that they’ve always wanted to be. 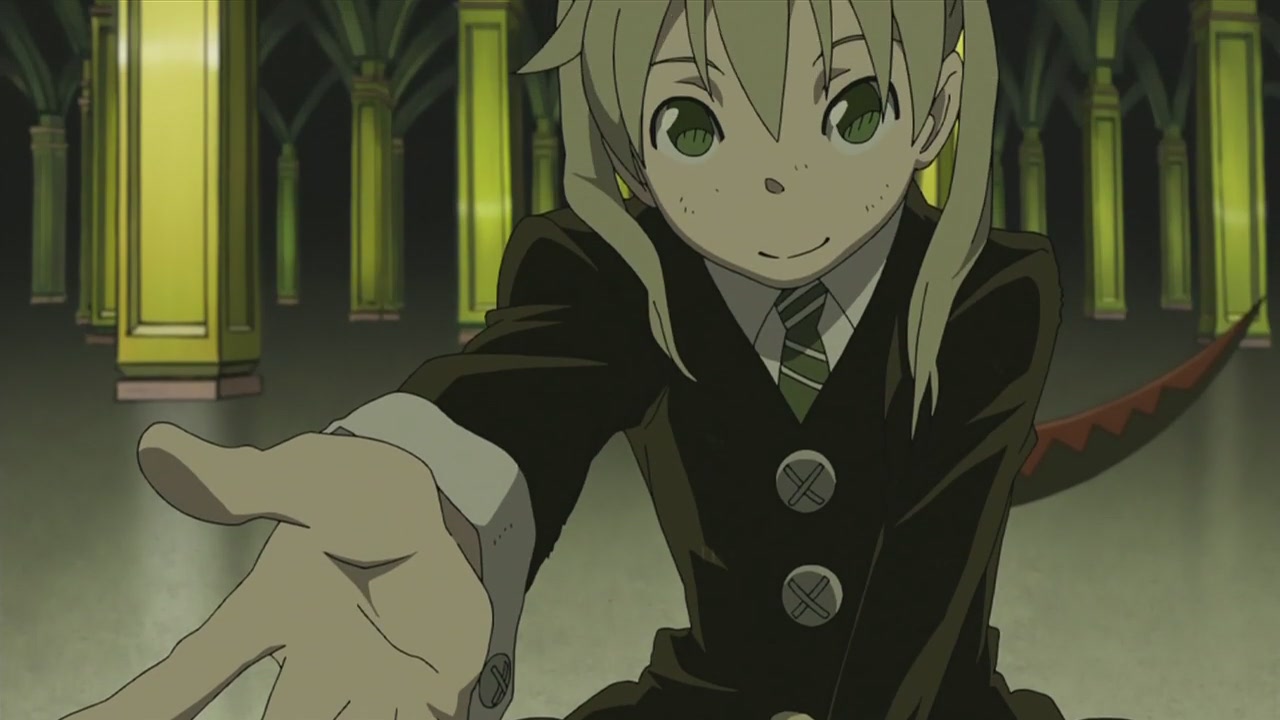 Maka Albarn is Soul’s Meister and unlike him, she is more of a brain than brawn. Her way of fighting relies more on figuring out the weakness of her opponent rather than going on a full-blown offensive mode. She has an underdeveloped body that becomes the center of many jokes throughout the show. Both her mom and dad have served in the scythe in one way or the other but are now divorced because her Dad keeps hitting on other women. This is one thing she hates about him; apart from that, she really loves him. 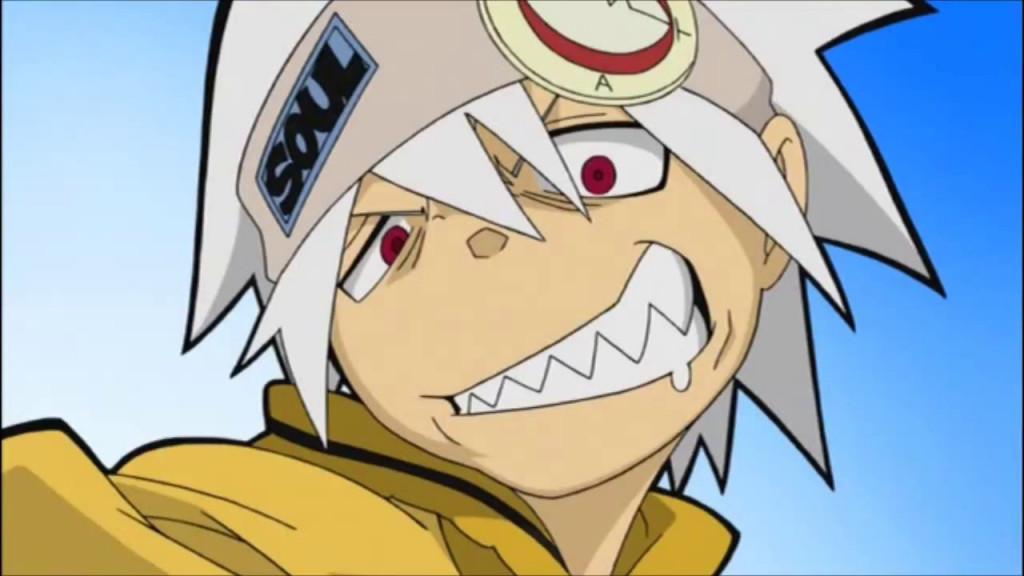 Soul Eater Evans, often referred to as “Soul” by his friends, is Maka’s Scythe partner. Like most teenagers, “Soul” just wants to appear cool all the time and in his quest to prove that he’s cool, he always ends up making a fool out of himself. He has a permanent droll dropping out of the left end of his mouth and overall, his appearance is that of a regular teenage boy. He often gets into fights with his partner for getting too carried away by the whole soul-eating, but in the end, the two always find some common ground and remain friends. 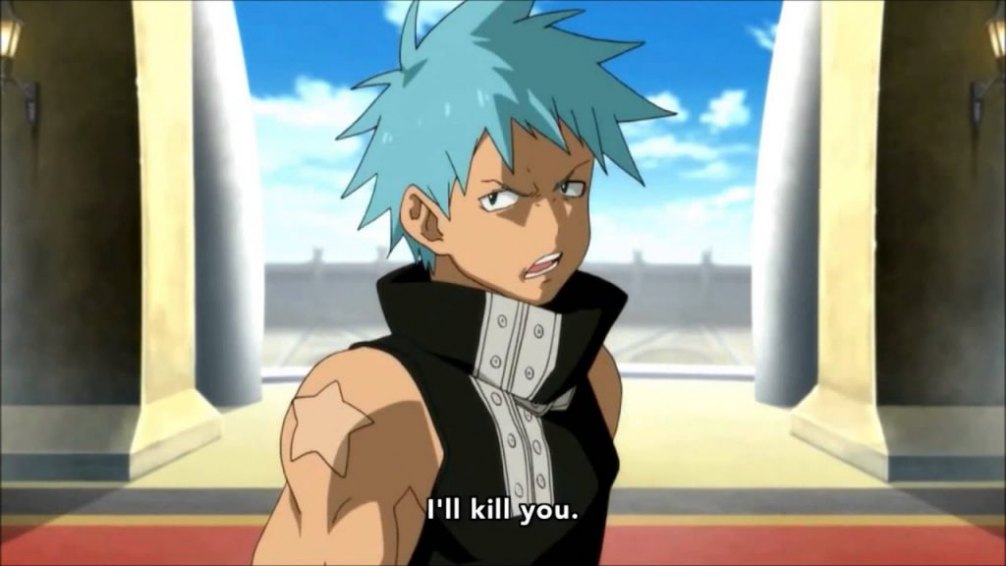 There are only two survivors of the Star Clan and one of them is Black Star, which explains the huge star tattoo on his right shoulder. He is one of the main Meisters of the show and his partner at the academy is Tsubaki Nakatsykasa. In the current events, he is only a two-starred Meister and is also a member of a student unit named Spartoi. 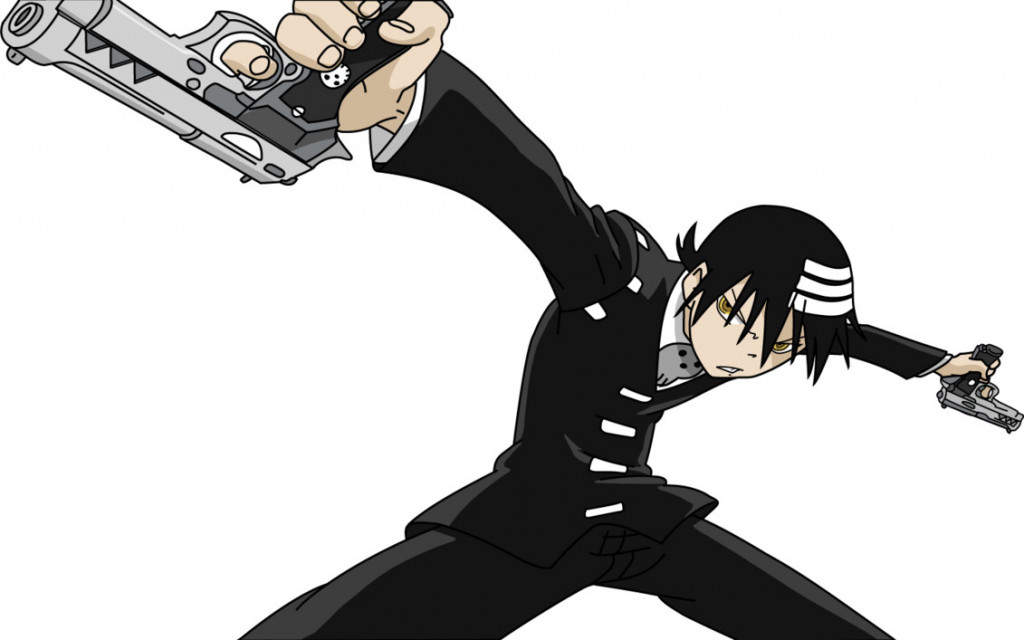 “Kid” is the son of the Shinigami who runs the academy and because of that, he is usually ostracized by other students of the school as they assume that he will hurt them. But later in the series, he makes some really good friends and realizes the importance of relationships. Kid suffers from some serious OCD, which directly reflects on his hunger for perfection with respect to pretty much everything he does. Asymmetrical objects in his surroundings give him panic attacks and at times, even distract him from his battles. He is so obsessed with symmetry that very often he even calls himself an “asymmetrical piece of garbage” just because the left side of his bangs has white stripes and the right side does not.