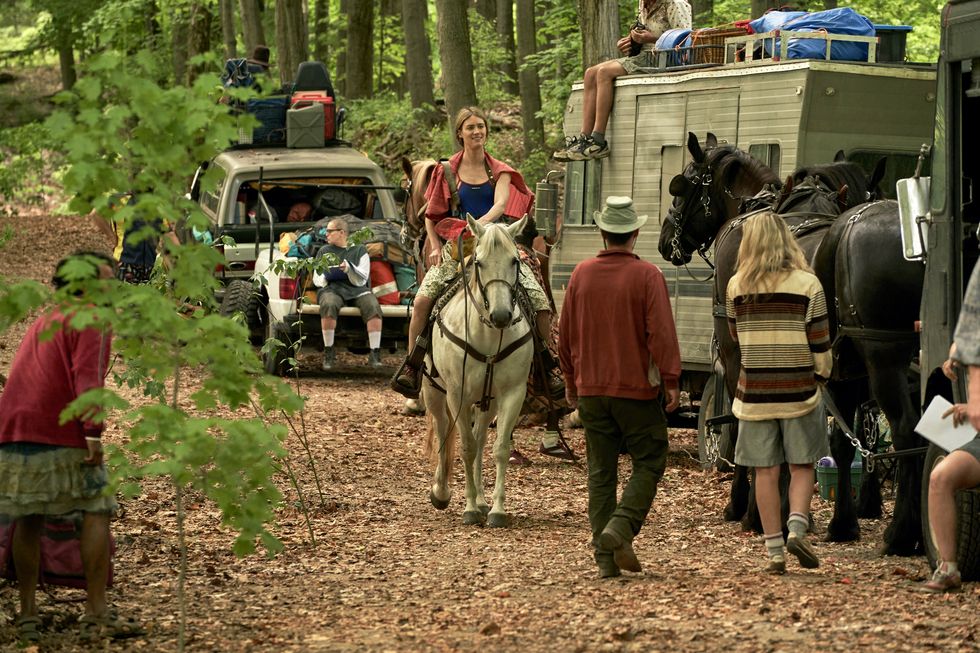 ‘Station Eleven’ introduces us to a relatively optimistic post-apocalyptic world and follows a troupe of traveling actors and musicians that move from one human settlement to the next. The story switches between the days leading up to the deadly flu that killed off most of the Earth’s population and the post-apocalyptic world where a new kind of society has taken root.

Based on the novel of the same name by Emily St. John Mandel, the story is an expansive one. The opening episodes of the miniseries show us the silent but deadly advent of the pandemic and introduce the characters whose lives criss-cross the narrative. A few intriguing plotlines are also introduced, even as some details remain lost in the show’s central calamity. Let’s take a closer look at ‘Station Eleven’ episodes 1, 2, and 3, and make sure we’ve picked up all the details. SPOILERS AHEAD.

The series opens with Arthur Leander performing ‘King Lear’ on stage, only to collapse midway, seemingly of a heart attack. Jeevan, a member of the audience, tries to help but is too late. On his way out from the theater, he finds a child actress named Kirsten who cannot find her guardian. Jeevan decides to help Kirsten get back home but gets a call from his sister, a doctor, who informs him of the deadly flu that is starting to spread. She urges him to head to their brother Frank’s apartment, which Jeevan does, but only after buying thousands of dollars worth of emergency groceries.

Barricaded in the apartment, Kirsten, Jeevan, and Frank watch the world slowly come to a standstill as the pandemic rages on. An airplane crashes in front of them, and eventually, the power is also disconnected. We then see Jeevan and Kirsten emerge from the building eighty days later and begin to make their way towards the lake. Through flashbacks, we see that Kirsten was close to Arthur and that he gave her a copy of a graphic novel titled ‘Station Eleven.’

There is another time jump, and we are taken twenty years after the disastrous flu. Kirsten, now grown up, accompanies a troupe of traveling Shakespearean actors as they make their way around the Great Lakes area. They are well-loved and residents of various small human encampments that the troupe performs in look forward to their visits. Going back to the time before the calamity, we are then introduced to Miranda, who Arthur befriends, and the two eventually become lovers.

Station Eleven Episode 3 Ending: What is the Traveling Symphony?

Arthur and Miranda eventually fall out when the latter discovers that the actor is cheating on her. During a work trip to Malaysia, Miranda is stranded due to the pandemic. Soon after, she is given special access to a boat to return home but then gets the news of Arthur’s death (from the flu). Miranda is shattered, and episode 3 closes with her barricading herself inside her hotel room. In the final scene, as she stands at the doorway of her room, a large man in a golden spacesuit appears in front of Miranda.

Apart from laying the groundwork of the remarkable, decades-long story arc, the opening episodes also introduce us to some intriguing aspects of the post-apocalyptic world. The Travelling Symphony, a troupe of moving actors and musicians, is seemingly a crucial part of the nascent society emerging after the calamity. Made up of predominantly Shakespearean actors, the eclectic group travels between small human settlements and is well received wherever they go. Some of the troupe’s members seem to be borderline celebrities and are asked after by expectant audience members.

Most importantly, however, the Travelling Symphony seems to be a vehicle for preserving art, music, and theatre. The troupe spreads happiness and nostalgia through its performances and gives people a reason to celebrate in an otherwise bleak world. The group, and the characters that constitute it, also symbolize the enduring quality of art and how it is inseparable from the human experience, even in the face of apocalyptic tragedy.

What is the Station Eleven Comic About? Who Wrote It?

‘Station Eleven’ is a sci-fi graphic novel first seen with Arthur. He gives it to Kirsten, who is then seen reading and quoting the book on multiple occasions. At one point, she also says that only one copy of ‘Station Eleven’ exists, which makes things quite intriguing when an ominous-looking man quotes a line from it but doesn’t reveal to Kirsten where he read it.

Though we still don’t know the story of ‘Station Eleven,’ we do know who wrote it. Miranda is known for spending many hours of her day on a mysterious writing project, which is eventually revealed to be the titular graphic novel. She is not particularly ambitious about getting it published and is even mildly chided for working so hard on something she doesn’t want others to read. Eventually, in possibly her last meeting with Arthur, she gives him a completed copy of her book, which he then gives to Kirsten.

A few notable points about the titular book are worth noting, the first being the mysterious initials in the front. The book’s first page has “M.C.” written on it, which almost certainly stands for Miranda Carroll, the author. Secondly, the book’s protagonist seems to be a spaceman in a gold suit, which is what Miranda sees in the closing scenes of episode 3.

This possibly signifies that after barricading herself inside her hotel room, she loses herself inside the fictional world she has created in her comic. Of course, there could be some parallels between the comic and the show’s overall plot, but those are yet to be revealed, and for now, Miranda’s book seems to be symbolic of her own alienation from people.